Shivaji’s navy never really sought to challenge the Europeans since it lacked the capacity to fight them on the high seas. The Marathas understood their capabilities and limitations well, and shrewdly remained close to the shore. 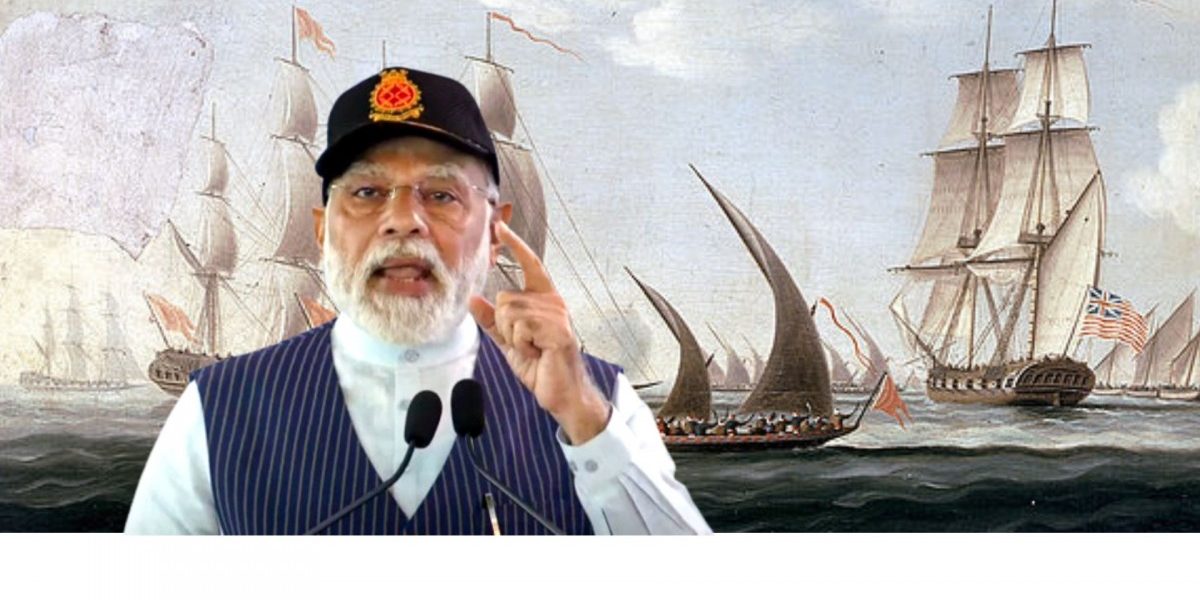 PM Narendra Modi at the launch of the INS Vikrant. In the background is a painting by Thomas Buttersworth showing Marathas attacking the sloop 'Aurora', of the Bombay Marine, 1812. Photos: PTI and Wikipedia Public Domain.

The commissioning by Prime Minister Narendra Modi of the first home-built aircraft carrier was a red-letter day for the Indian Navy, which has been hurting because of resource constraints.

On the same day, the Prime Minister also unveiled the Indian Navy’s new flag, inspired by the royal seal of Shivaji who, the PM declared, “had built such a navy on the strength of its sea power” that it had frightened the colonial powers.

Actually, Shivaji’s navy never really sought to challenge the Europeans since it lacked the capacity to fight them on the high seas. As the historian B.K. Apte has noted, the English navy “was superior to the Maratha warships in every respect”.

Most Maratha action took place close to the shore.

The Marathas understood their capabilities and limitations well, and shrewdly used their classic hit and run tactics at sea. But they could do so only close to the shore, using their familiarity with the creeks and bays to get away from the heavier European ships. And their enemies were not just the Europeans, but the Mughals and the Siddis of African origin, who had a strong maritime presence in Konkan. In essence, their action was aimed at protecting the seaward flanks of the Maratha Empire.

Also read: How the Indian Navy’s Ensign Evolved Over the Years

The British were already ensconced in Bombay and they had constant run-ins with Shivaji, who had captured the island of Khanderi off Bombay in 1679. When he began to fortify it, the British hit back with a blockade of the island. After months of skirmishing, the Marathas prevailed and the issue was resolved through a treaty drafted in January 1680. Incidentally, Shivaji’s fleet commanders were named Daulat Khan and Mai Nayak Bhandari.

The great Chhatrapati Shivaji was the first modern military leader of the country for two reasons.

First, he ran a professional army paid out of the central treasury, which was unusual among Indian kings. Second, in recruitment, he did not discriminate on the basis of caste or religion. Besides Daulat Khan, there were more than a dozen Muslim commanders in Shivaji’s army. A Hindu king, his tenets would actually go four-square against his Hindutva admirers of today.

There is nothing unusual here. The Indian Army boasts of many storied regiments whose origins go back to colonial times.

It was an ‘Indian Army’ that conquered India on behalf of the British. The history of our colonial yoke is ambiguous – Indians fought Indians and most kings collaborated in aiding the growth of British power. The Sangh Parivar should know a lot about this, given its shameful role in the Indian freedom struggle.

For Modi to claim that the colonial yoke has been thrown off in 2022 by the new ensign, is, well, another Modi-ism. Disturbingly, the Indian Navy has participated in this farcical denouement, whose aim was clearly political.

If the Indian Navy was really looking to honour an Indian maritime hero with the design of its new pennant, on what grounds did they ignore the greatest maritime commander in Indian history, Rajendra Chola?

The Cholas’ achievement was magnitudes greater than that of the Marathas. Sailing across the Bay of Bengal, they destroyed the Srivajaya kingdom and established Indian hegemony in a vast area including Java, Sumatra, Thailand and Malaysia, which lasted for centuries. The real strength of a navy is as an offensive instrument; using it defensively is a sign of weakness.

The Indian maritime tradition is very old, going by the Vedas, the Buddhist Jatakas and Sanskrit and Pali literature.

Mohenjodaro, Lothal and Harappa reveal substantial maritime activity. Literature in littoral languages like Tamil, Konkani, Gujarati, Sindhi, Malayalam, Telegu and Oriya too inform us of the Indian tradition, as do Chinese, Arabic and Persian literature as well as European writings.

If anything, the Kalingas were perhaps even earlier  pioneers of the process and their achievements pre-dated the conquests of the Cholas in  Southeast Asia, where they laid the foundations of Indian or Indianised states.

Manoj Joshi is Distinguished Fellow at the Observer Research Foundation and the author of Understanding the Indo-China Border.