Watch | 'Chinese Are on Indian Territory in Depsang and Pangong; LAC Has Shifted Westward' 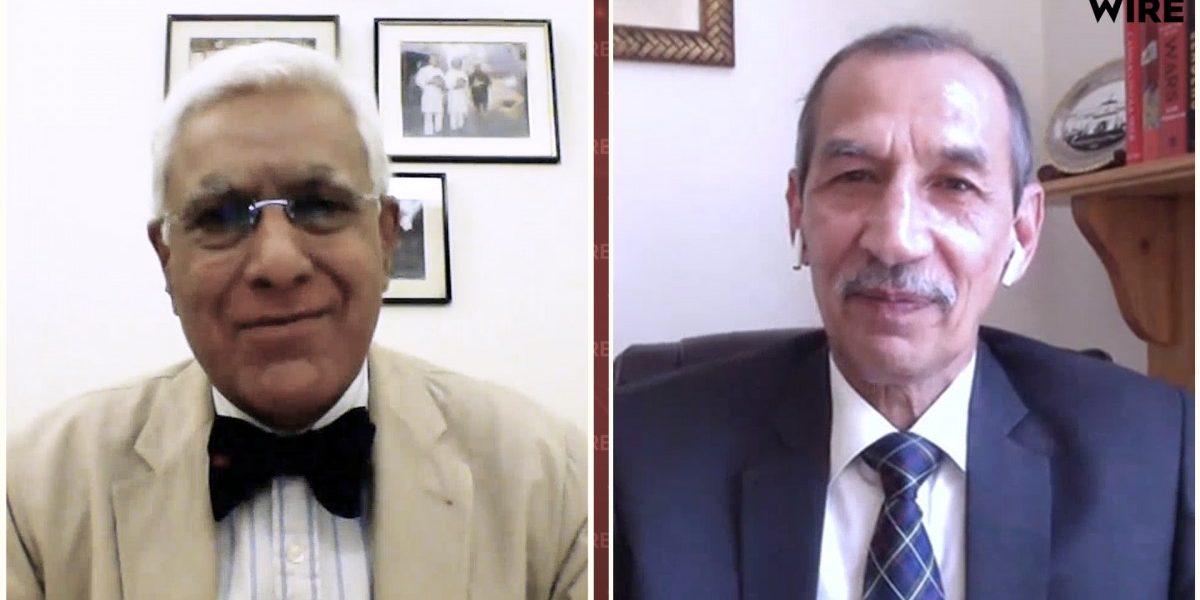 In perhaps the most outspoken and comprehensive interview given by one of the Indian army’s most senior retired Army Commanders, Lt. Gen. D. S. Hooda has readily accepted there’s contradiction and confusion in press reports of disengagement at Gogra and has called for an official statement by either the army or the government to clarify the matter.

Lt. Gen. D. S. Hooda, who was the Northern Army Commander during the 2016 surgical strikes, said there is no reason why there should not be an official statement clarifying the disengagement at Gogra as well as other points in Ladakh. When asked if this failure to clearly communicate and clarify was a lapse, Gen. Hooda said: “You could call it a lapse”.

Although every other newspaper and television channel has reported disengagement between the Indian and Chinese armies at Gogra, the Business Standard on July 10, said that talks had broken down and there was no disengagement.

The author of that article, Col. Ajai Shukla, the paper’s Strategic Affairs Editor, reiterated the same point but in even greater detail in an interview to The Wire on July 11. Although later that day in his private blog he said a 1 kilometre disengagement had taken place, that piece has not appeared in the Business Standard.

On July 15, The Economic Times said both sides have retained 50 soldiers each at Gogra whilst today, July 16, the Hindustan Times reports that there are 30 Chinese soldiers in forward locations at Gogra. The Hindustan Times adds there are hopes “for a total withdrawal by this weekend”. It’s this contradiction and confusion that Gen. Hooda has said must be clarified. As he put it: “The need to be factual is a priority”.

Gen. Hooda said that Depsang is ”tactically and strategically more important to us” than Pangong Lake. It is critical for India’s access to the Daulat Beg Oldi airstrip as well as the Karakoram region. However, he added, “it’s going to be difficult” to get the Chinese to withdraw from Indian territory at Depsang and Pangong. “Here you are looking at very hard and tough negotiations … it’s going to take time … it will be difficult to secure Chinese withdrawal.”

Speaking specifically about Pangong Lake and the proposal that’s appeared in the media that disengagement can be secured by the Chinese pulling back to Finger 6 whilst the Indians pull back to Finger 2, Gen. Hooda said, “The Galwan principle cannot apply at Pangong or even Depsang”. If it does, he added, China will be “left holding our territory”. He said the only solution to the Depsang and Pangong Lake situation is for the full restoration of status quo ante as existed before May 5.

Gen. Hooda also spoke about reports in newspapers (The Hindu and Business Standard) that, because India has accepted the Y-Nallah as the marker for the LAC at Galwan instead of PP-14, the LAC has moved 1 km to the west into Indian territory. He said whilst “every metre is critical”, he believes this is “not a permanent arrangement but just temporary”. He pointed out that in 2015 the Chinese built a watch tower just a few metres inside Indian territory in Depsang which the Indian army destroyed. Later China accepted it was on Indian territory.

Questioned about reports that buffer zones at Galwan, Hot Springs and Gogra were largely or perhaps entirely on Indian territory, Gen. Hooda first said that it was hard sitting in Delhi to be certain of this because we aren’t exactly sure where the LAC lies on the ground so we don’t know if it’s on Indian territory or not. However, he also pointed out that something similar happened in 2014 when the Chumar incident occurred. Buffer zones, he added, keep peace when soldiers would otherwise be face to face if not eyeball to eyeball. However, he added, we must make sure these buffer zones do not become permanent thus restricting India’s right to patrol up to its full perception of the LAC.

Asked if the Indian army has the military capacity to push the Chinese back, Gen. Hooda said: “The military can do it. Certainly. But it will be war.” When questioned further, Gen. Hooda accepted that in terms of resources and numbers there is a big difference between the Indian and Chinese armies but, he added, the application of large force in Ladakh’s high altitude area is not easy. He said “we have war-gamed it enough”. He added that the Indian air force has an advantage over the Chinese. He said “We can hold our own”.

Speaking to The Wire about the will shown by India’s political leadership and whether it needs to be more clearly and forcefully expressed, he said: “In my view more forcefully is the answer”. Gen. Hooda added that China “is attempting to coerce us militarily”. He said “our firmness must be clearly communicated”.

Gen. Hooda said that in the early weeks of the present crisis the government had underplayed it and that was a disadvantage. He said the Prime Minister’s visit to Ladakh had altered that but he added “it should have been done earlier”.

In this context Gen. Hooda twice said that India “should not rule out the military option” even whilst, in the first instance, relying on negotiations and political talks between the two countries.

Questioned about reports that there was intelligence in April which the army either did not properly assess or wrongly dismissed as normal spring time activity by the Chinese, Gen. Hooda, a former Northern Army Commander, said not just the army but the intelligence system as a whole failed to correctly assess Chinese intentions. He said we need to look into this after the crisis is over.

However, Gen. Hooda unequivocally and at least on two occasions said: “The fact is we got surprised. There is no doubt about that”. He added: “No one expected the Chinese could carry out such a blatant move.”

Finally, Gen. Hooda was closely questioned about one of the Army Chief’s comments to the Economic Times in an interview on May 14, 10 days after 70 Indian soldiers got injured in a skirmish on Pangong Lake on May 5 and 6. In the interview the Army Chief referred to clashes between Indian and Chinese troops as “a routine happening … we should not read too much into it.”

Gen. Hooda said injuring 70 Indian soldiers is not routine. It hasn’t happened in the past. However, he believes that Gen. Naravane was “trying to play it down”. He added that underplaying the situation was the approach of the entire government.

When further questioned by The Wire on whether in playing down what had happened the Army Chief seemed guilty of misleading the Indian people, Gen. Hooda, who called the Chief “a professionally competent man” and “an honourable man”, admitted that Gen. Naravane’s “choice of words could have been different”.

Gen. Hooda was more openly critical of the way in which both the army and the government have been communicating through unnamed sources. He said: “I’m baffled and surprised why no proper official briefings has happened.” He pointed out that such briefings happened during the Kargil war of 1999. He said whilst every day briefing was not necessary it was wrong not to brief regularly. He repeated he simply couldn’t explain why this was not happening.

Finally, when asked if, after a distinguished four decade career in the army, he was saddened that today questions are being asked about the army’s handling of intelligence, its preparedness in Ladakh and, most importantly, comments made by the Army Chief, Gen. Hooda said: “It pains me”. He explained that the situation “requires introspection” both by the army and government. He said a detailed study like the Kargil Review Committee is needed once the crisis is over.

The above is a paraphrased precis of Lt. Gen. D.S. Hooda’s interview. Please see the full interview for details.