The Great Divider of India is Now Dividing its Armed Forces

It is difficult to recall another election where the people have been so divided as a conscious strategy.

In 2015, TIME magazine featured Narendra Modi on its cover with the title, “Why Modi Matters”. Its hope, expressed in the headline of its story, was that he would lead India to step up as a global power. Four years later, with India in the midst of a keenly fought election, the iconic magazine has featured Modi on its cover once again, but this time under the title, “India’s Divider in Chief.”

Ideally, such a mirror should have been held up to the country by its own media. Unfortunately, most of it has been busy pandering to the Modi cult, carrying interviews and puff pieces on Modi and BJP president Amit Shah. The national media insistently ignores the fact that instead of campaigning on issues that affect the life of the people of the country, the duo have been talking about everything else – from religion and nationalism and pride to former prime minister Rajiv Gandhi’s holidays and unproven cases of corruption.

The “Divider in Chief” jibe must hurt because it is true. It is difficult to recall another election where the people have been so divided as a conscious strategy. It is true that in democratic polities there is a natural process of division when citizens choose their rulers from competing  candidates. But when the ruling dispensation shapes the debate in terms of labelling all those who oppose them as traitors to the nation, and spares no institution from this toxic process of polarisation, then we have a problem. 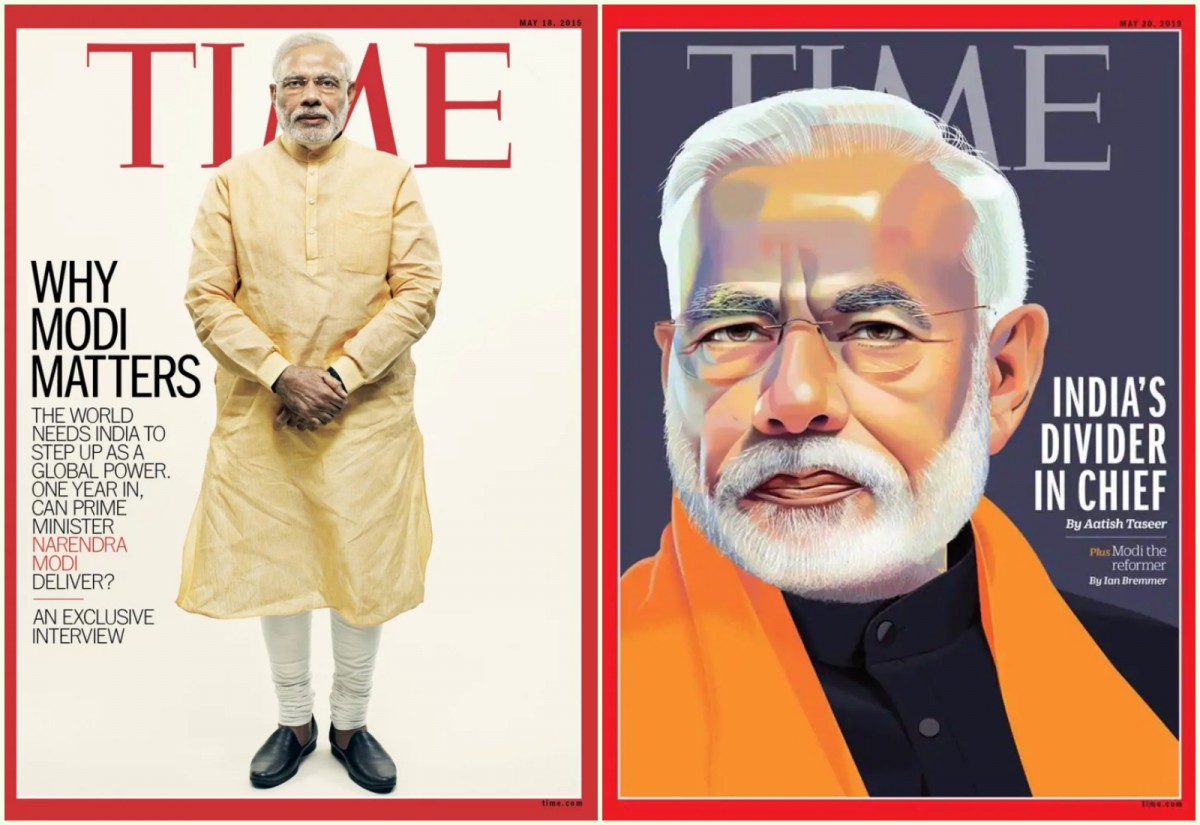 What a difference four years make. TIME magazine covers on Modi in 2015 and 2019.

Consider how the Modi campaign has divided both the Army and the Navy in this election campaign.  In a bid to shore up the government’s credentials, the Indian Army has officially denied that there were any strikes on terror camps across the Line of Control before September 29, 2016, the date of the Modi government’s self-proclaimed surgical strike. Modi himself referred to any strikes conducted earlier as a “video game.”

This came after a claim by the Congress Party that there had been six surgical strikes conducted during the tenure of the  Manmohan Singh government.  Other observers, too, have listed out such strikes. The veterans who conducted these strikes have expressed their resentment at the government’s stand. It is well known in the defence circles, that cross-border strikes have been authorised since the time General B.C. Joshi was the army chief in the mid-1990s.

All this does not even take into account the biggest cross-border strike of all – the dramatic and difficult operation to capture the Siachen Glacier under the noses of Pakistan. On Baisakhi Day in 1985, Indian forces pre-empted the Pakistanis and occupied the glacier and an area a third the size of Sikkim. Pakistan threw in everything they could into an effort to push the Indians out, but failed. Indian forces have since held the region of great strategic importance.

Military personnel associated with the BJP who ought to have known better have chosen to back the government claim. Prominent among these is General (retd) V.K. Singh, who flatly denied that any had occurred in his tenure.

Even if we do not question the honesty of the deniers, the problem is of nomenclature. The BJP mis-represented the September 2016 cross-LoC raid as a “surgical strike” and so now, its government blandly claims that none have occurred before this hallowed event.

To cut a long story short, what has the BJP achieved with this debate, apart from the votes it hopes it will get by politicising the bravery of soldiers? It has divided the army on political lines and questioned the bravery and dedication of an entire generation of army personnel who, at great risk to their lives, carried out cross-LoC strikes against terrorists in the 1990s and the 2000s.

Last week, Modi followed up his “success” with the Indian Army by dividing the Indian Navy as well. The occasion? His throwaway claim that former prime minister Rajiv Gandhi had used the aircraft carrier INS Viraat for a holiday. Modi said that Rajiv had used the carrier as a “personal taxi” during a holiday with family and friends and compromised national security in the process.

He was backed on this claim by Commander (retd) V.K. Jaitly and Lt Commander Harrinder Sikka, both of whom served on the ship. There was an allegation that foreign nationals, including relatives of Sonia Gandhi and other friends, had been on the journey.

But the charge was firmly refuted by the captain of the Viraat at the time, vice admiral (retired) Vinod Pasricha. Subsequently, the then Fleet Officer Commanding-in-Chief Southern Naval Command (FOC-in-C, SNC), L.N. Ramdas, who later became Navy chief, noted that not only were there no foreigners involved, but that his visit on board was part of an official trip by the prime minister.

In essence, then, the prime minister’s thoughtless remarks have ended up dividing the navy as well.

Encouraging divisiveness is written into the BJP’s DNA. It is most strongly manifested when it comes to the country’s minorities, especially the Muslims. It has systematically excluded them from its electoral calculations and made Muslim-bashing a means of rallying its supporters.

The country has gone through one division on account of religious polarisation in 1947. Geographical areas where Muslims were a majority were separated to create Pakistan. In the ensuing partition, millions were displaced and hundreds of thousands lost their lives.

Even then, the BJP continues its politics of division. In Jammu & Kashmir, it has adopted a hard line which has resulted in a sharp rise of violence, and is pushing the population to a prolonged war of attrition.

In Assam, the BJP  is championing a process which will selectively disenfranchise Muslims.

In other places it has used selective violence related to ‘cow protection’ to intimidate them.

The danger of this cannot be overstated.

There are 200 million Muslims in India today – too large a number for even the worst Hindutva fanatic to think they can be thrown out of the country—and this number will grow to 311 million, according to the Pew Research Centre. Even so they will be 18% of the population, with Hindus remaining an overwhelming majority at about 77%.

In a belt from Saharanpur district, north of Delhi, all the way to Bihar along the Nepal border, there are a dozen or so districts where the percentage of Muslims is anywhere between 25-40%. There are another half a dozen such districts in West Bengal and more than a third of the population of Assam is, in any case, Muslim.

The purpose of this enumeration is to point out that if communal divisiveness is encouraged,  the country won’t be divided this time; the social, political and economic fabric of its heartland will simply be shredded.

Note: Due to a typographical error, General B.C. Joshi was misidentified in an earlier version of this article as General B.P. Joshi. The rank at retirement of vice admiral Vinod Pasricha was erroneously stared as rear admiral and Admiral Ramdas’s position at the time was not Navy chief but Fleet Officer Commanding-in-Chief Southern Naval Command (FOC-in-C, SNC).