Shujaat Bukhari's Assassination is Aimed at Disrupting Any Move Towards Peace

The message in the murder is the obvious one. Kashmir’s terrain has changed, all the past verities no longer prevail. In the new situation, you are either for us, or against us, there is no middle ground. 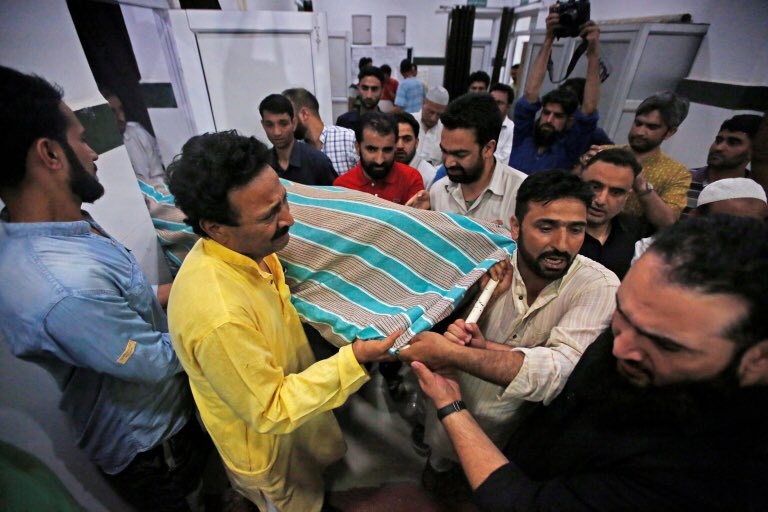 In the depressing annals of Kashmir militancy, the killing of journalist and editor Shujaat Bukhari is unique. Jammu and Kashmir has been one of the best covered insurgencies in the world because journalists have enjoyed a relative immunity from the violence. Foreign reporters, particularly those belonging to the print media, have never been blocked from the Valley, and local and mainland journalists have been able to move around with relative freedom and talk to who they could.

At the same time, there have been many incidents too before Bukhari, 18 journalists in J&K died in the line of duty. The 1990 killing of Lassa Kaul, head of Doordarshan in Srinagar, was the first, but the fact that he he was a Kashmiri Pandit as well was probably a bigger factor. A big cause célèbre was the illegal detention of Yusuf Jameel by the Indian Army in June 1990, but the journalist, who worked for the BBC and The Telegraph, came back safe. There have been assassinations and those killed in cross-fire, and local journalists have often complained about the pressures they have had to work under. However, the last time journalists were killed was in 2008 – when Ashok Sodhi, a photo journalist was killed in a cross-fire, and later when Javed Ahmed Mir was shot while covering a demonstration.

So the big question is: Why Shujaat, and why now ? He was no radical, implacably opposed to the Indian state, nor was he someone whom the separatists and militant organisations could even remotely accuse of being a government stooge. If anything, he had, over the years managed to successfully walk the fine line any professional in the Kashmir valley – especially a media person and particularly an editor – must walk. Yet he was no middle-of-the-line neutral. He called a spade a spade, without being shrill or provocative.

Whoever has killed him– and we will not rule out the hand of anyone at this stage – wanted a disruption. Some may ask whether there were people in the deep state who wanted to send a message, or merely disrupt the current situation? In the past, Kashmiris like Dr Abdul Ahad Guru and Dr Farooq Ashai have been killed by unidentified elements suspected of being close to the government.

Then, there are the militants and their backers. Every time efforts are made to end the cycle of violence that has gripped the state since 1990, a prominent, middle-of-the-road figure is shot, and there should be no doubt that Bukhari was someone who wanted peace and an end to the killings. This trend began with the assassination of Mirwaiz Farooq in 1990 itself. Then, on the occasion of the anniversary marking his killing in May 2002, Abdul Ghani Lone, leader of the People’s Conference and a founder-member of the All Parties Hurriyat Conference, was killed. In the same way, Fazal Haq Qureshi, one of the founder members of the Hizbul Mujahideen who had supported Lone in calling for a rethink in the militant movement in 2000, was shot in December 2009, leaving him comatose.

Associated with this process was the case of Abdul Majid Dar, the number two man in the Hizb who had promoted a ceasefire with New Delhi in July 2000. He was shot in his own house in Sopore in 2003,  three years after the ceasefire failed.

In a bid to derail the 2000 ceasefire that was first declared by Dar on behalf of the Hizb and then reciprocated by the Atal Bihari Vajpayee government, some 100 people – mostly non-combatants and some of them pilgrims to the Amarnath shrine – were killed on August 1-2.  A bomb in Kothibagh, Srinagar killed 15 people on August 10, including a photo-journalist.  Ten people were killed in Doda district in November that year. Fifteen persons were killed in February 2001 in Rajouri, another 15 in July and yet another 15 in August in Doda. All these attacks were the handiwork of Pakistani groups who also intensified their strikes on the security forces.

Not surprisingly, terrorist strikes aimed at derailing the peace process initiated by Vajpayee and Musharraf in 2004 also took place. In April 2006,  amidst efforts to start talks with the moderate faction of the Hurriyat, 35 Hindu civilians were killed by terrorists in Doda and Udhampur districts. In June 2006, unidentified gunmen, most likely belonging to the Lashakar-e-Tayyaba, kidnapped 10 Nepali and Bihari labourers, and a local Muslim Rashtriya Rifles soldier in Kulgam. The soldier was tortured and beheaded and all the others, except a Muslim among them, were killed. On July 11, there were five grenade attacks in the Srinagar area targeting tourists, leading to the death of six persons.

On Thursday morning, NDTV did run a report citing national security advisor Ajit Doval saying that the ongoing ceasefire was aimed at “giving a respite to the common man during Ramzan”, implying that it may not be extended. One reason for this is that the ceasefire – in which the Army suspended cordon and search operations and lifted checkpoints – saw a huge surge in terror-related incidents. Where there were only 25 incidents in the April 19-May 26 period, there had been as many as 66 cases in the period after the ceasefire – May 17-June 13. But at the end of the day, the call on the ceasefire is not Doval’s. It is that of the cabinet committee on security.

However the right-wing commentariat may seek to vilify him, Bukhari was a believer in the rule of law. He was a well known journalist whose positions on various issues were there for all to see. With regard to the recent ceasefire, Bukhari wrote about how it offered “a glimmer of hope to the common people”. That was just about it.  His report criticised the security forces for failing to avoid civilian casualties in their operations in the Valley. He also noted that the ceasefire was the best way to “tackle the situation in which killings have become the new normal.”  His heart was clearly for peace. Those who killed him understood that very well.

Perhaps, the message in the murder is the obvious one. Kashmir’s terrain has changed, all the past verities no longer prevail. In the new situation, you are either for us, or against us, there is no middle ground.