“When it comes to Kashmir, the institutions and justice system turns blind. Nobody can understand what we have gone through all these years.”

A board with the names of the victims of the Pathribal fake encounter and J&K police personnel. Credit: Twitter/Reuters 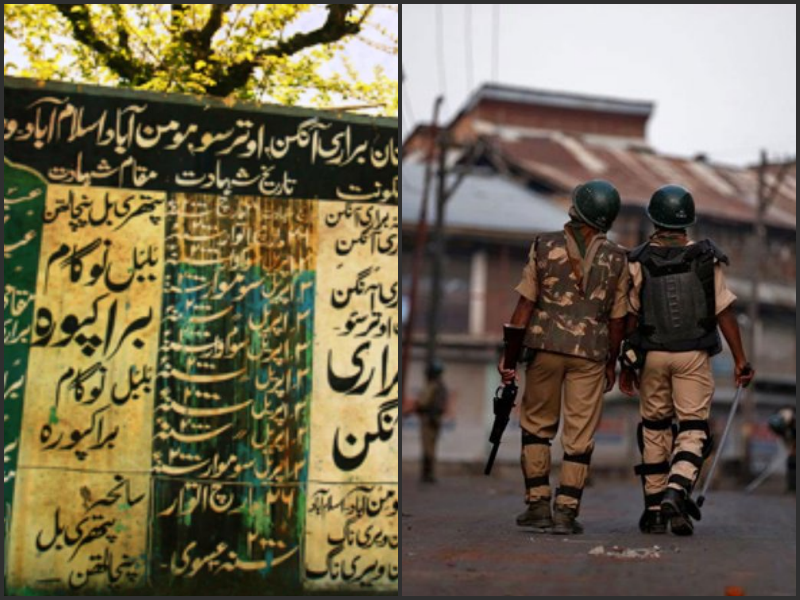 A board with the names of the victims of the Pathribal fake encounter and J&K police personnel. Credit: Twitter/Reuters

Anantnag (J&K): Bed-ridden for the past two years, Raja Begum, 68, doesn’t want to recall the tragedy that struck her family in the spring of 2000. At her home on the outskirts of Anantnag town, she is equally impassive to the news reports that the Supreme Court has agreed to hear a petition on Pathribal fake encounter in which five civilians – dubbed as “Pakistani terrorists,” responsible for the massacre of 35 Sikhs at Chittisinghpora village – were killed by the army.

Among those killed was Begum’s son Zahoor Ahmad Dalal, 23, who had settled into the family business. “All these years, we have been witnessing how the justice system has failed us. Don’t talk about it [the case] anymore,” wrinkle-faced Begum told her daughter Manzoora, who had informed her about the apex court’s decision.

An unending struggle for justice

The past 17 years have been a long and crushing struggle for the Dalal family and Begum, whose husband had died when Zahoor was only three.

“The world knows how my son was snatched from me. What else do you want me to talk about,” has been her response each time the media has knocked at her door.

Of her seven children, Zahoor was the only son. The pain of losing him has taken a heavy toll on her health. Having suffered two heart strokes, she has now confined herself to the four walls of her house.

“My brother was a budding flower…years have gone by. If they [ the government] had any intent to provide justice to us, they would have acted. Where is the hope?” asked Manzoora, her eyes welled with tears.

Zahoor was picked up by the police on the evening of March 24, 2000, outside his house in Mominabad, just minutes after he had stepped out for a walk after a busy day at his shop, according to his family. When he didn’t return, the family approached the police, but to little success.

Four more people – Bashir Ahmad Bhat, 22, and Mohammad Yousuf Malik, 25, both from Halan village in Verinag area, and 42-year-old labourer Juma Khan and his namesake, both from Brannigan village, had gone missing the same day. While Malik and Bhat were picked up from Anantnag town, the two Khans were whisked away from their houses in the middle of the night.

“We have met with disappointment time and again, but hope sustains the world. Let’s see what comes out of this new development,” Zahoor’s uncle, Nazir Ahmad told The Wire, referring to the apex court’s notice to the Centre, the J&K government, the army and the CBI, giving them six weeks to respond to the petition seeking trial of accused army men in an open court.

The twists in the case

Five days before the staged encounter, on March 20, 2000, unidentified gunmen killed 35 Sikhs at Chittisinghpora in Anantnag district, on the eve of the then US President Bill Clinton’s visit to India. The security agencies blamed Pakistani terrorists for the carnage and five days later, on March 25, the forces announced to have killed the militants responsible for carrying out the Chittisinghpora killings, in a joint operation between the army and J&K police.

But the sudden disappearance of five civilians during the same time had led to the suspicion that the militants killed were actually the innocent persons who had gone missing. Amid protests, the J&K government ordered exhumation of the militants’ bodies and their DNA testing to confirm their identities.

On April 6 and 7, the bullet-ridden and charred bodies were exhumed and identified by their relatives, following which the case was handed over to the CBI for investigation on February 14, 2003.

“There was tremendous psychological pressure on the army to show results after the massacre of 35 Sikhs,” the CBI said in its report. “The encounter was stage managed with a view to obliterate the identity of the killed persons with an oblique motive.”

While the chargesheet was supported by the independent investigation by DySP Abdul Rehman Sheikh, who had found that the encounter was fake and those killed were local civilians, two independent forensic reports of CDFD Hyderabad and CFSL Kolkata, established by the DNA analysis that the bodies of those burnt and killed were of the civilians.

The case, however, lingered on for years after the army refused to cooperate in the CBI investigation, invoking the Armed Forces (Special Powers) Act (AFSPA). The army had earlier dubbed the victims as Lashkar-e-Taiba militants and made this announcement before the then Union home minister L.K. Advani, who was on a visit to Chattinsinghpora.

The victims’ families, however, got a glimmer of hope when the army moved the Supreme Court on May 1, 2012, after failing to get reprieve from a local court in Srinagar, which was hearing the case. The apex court, in turn, blamed the forces for stone-walling the trial of the accused by the civilian courts and also refusing to take over the case and initiate court martial proceedings against them. It gave the army eight weeks to decide whether its personnel accused of fake encounter should be tried by court martial proceedings or by regular criminal courts.

The army chose the former option and more than a year later, on January 20, 2014, after conducting “summary of evidences” it declared that there was “no evidence found against the accused” and the chargesheet against them was dismissed at the pre-trial stage.

Dejected by the outcome of the proceedings held by the army in an “opaque manner,” the victims’ families moved the J&K high court last year seeking directions that the army’s court of inquiry produce the records through which it dismissed the case and also transfer proceedings to the CBI court.

The high court, however, dismissed the petition prompting the petitioner to approach the apex court on July 27, 2016.

“…the high court omitted to note that the entire writ petition was a challenge to the army’s decision to close the case. The court also failed to see that the petitioners before it had no other reference material related to the army proceedings that closed the matter,” reads the petition that was filed in the apex court on July 27, 2016. “An option to hold trial by court martial is no justification for closing the case without proceedings to court martial.”

Advocate Nitya Ramakrishnan, who appeared on behalf of relatives of the victims in the apex court, told The Wire that the petitioners have made two requests – that the court should set aside the army ruling which had declared Pathribal fake encounter to be a “case of no evidence” and the court should order the trial of the accused in an open court.

“The important point is that army hasn’t conducted the court martial of the accused, an option it has chosen before the apex court. There has to be a trial. Army can’t quote rules to say that it [Pathribal fake counter] was the case of no evidence,” she said.

A vow to fight until the end

Thirty-nine-year-old Rashid, son of the older Juma, remembers vividly how the army “gate crashed” into their house and took his father on the excuse of guiding them to another village in the middle of the night on March 24.

“Everybody knows how my father and others were first murdered and their bodies burnt later. But we are craving for justice even after 17 years,” said Rashid, 39.

He has made a vow to his mother that he would not give up till his last breath and would continue to fight for justice. “The entire system stands with them, but we will keep using the power of word to retell our tragedies…till we are alive,” Rashid told The Wire.

The Khan family, in fact, faced a double tragedy after Rashid’s younger brother Rafiq Ahmad Khan, 16, was also killed on April 3, 2000, only a week after the killing of Juma, 42, along with four others.

Thousands of people from Brariangan and adjacent villages had gathered in protest, seeking exhumation of the five bodies, when near Brackpora they were fired upon by the special operations group of the J&K police.

“When it comes to Kashmir, the institutions and justice system turns blind. Nobody can understand what we have gone through all these years,” Rashid spoke softly.

A frail structured Ghulam Nabi, brother of Malik, one of the five killed, sounded equally pessimistic about accused army men being brought to book. “It was their agency [CBI] which proved that those killed were civilians and not militants. Wasn’t it sufficient for the government to punish the killer?” Nani demanded.

“My brother is gone now, so are the other four persons. I wish we are allowed to meet those who killed our relatives. I want to see in their eyes and ask them why they committed such heinous crime.”

The 29-page petition before the apex court has raised several questions. “Was the option given by the Supreme Court for court martial not a direction in effect to act in pursuance of the CBI chargesheet, and if so, why wasn’t the army wrong in substituting the CBI investigation with a swift summary of evidences calculated to exonerate the implicated officials? Whether the provisions of the Army Act, 1950 (Section 125) and the Army Rules, 1954 (rules 22-24) operate to negate official record and scientific data that establish wanton abduction and murder and whether the bar on the normal criminal process imposed by Section 7 of the AFSPA is meant to shield cold blooded murders when it is the admitted case that the deaths were caused by the army personnel and the records indicate that the deaths were of civilians abducted from their village before they were killed?” are among 17 questions raised in the petition.

“The army tried to bury the case at the summary of the evidence stage, but Pathribal is not only the trial in a case but it is the trial of the institutions and justice system as well,” argued Imroz.