Russia Sanctions: US Hoist With Its Own Petard in Dealings With India 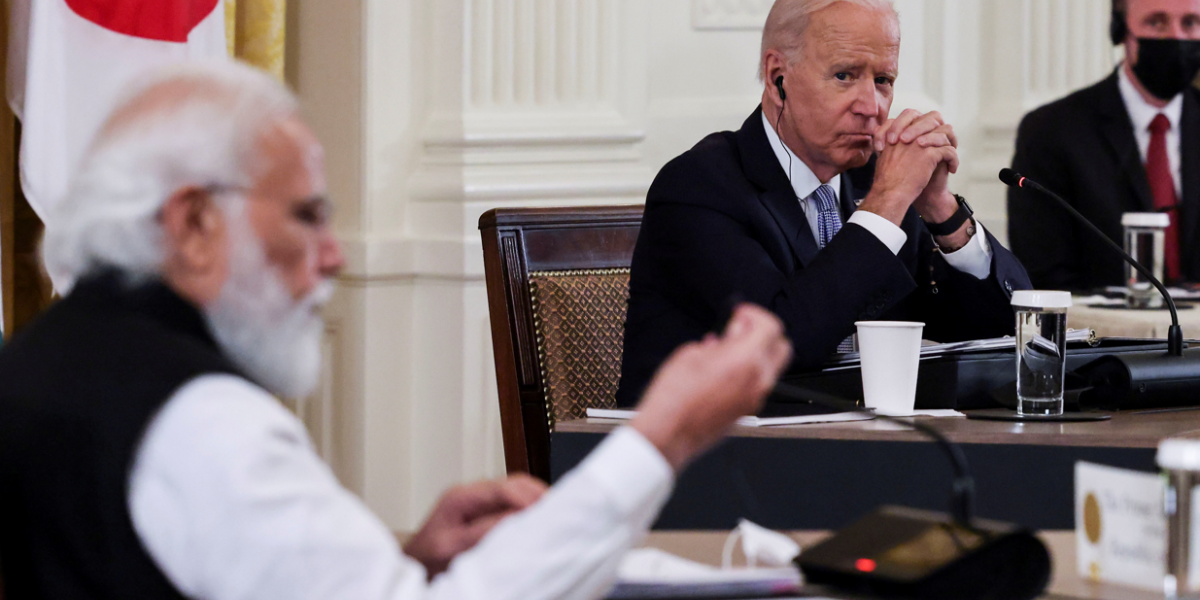 US President Joe Biden listens as India's Prime Minister Narendra Modi speaks during a 'Quad nations' meeting at the Leaders' Summit of the Quadrilateral Framework held in the East Room at the White House in Washington, U.S., September 24, 2021. Photo: Reuters/Evelyn Hockstein

New Delhi: In a troubling spinoff to its bitter showdown with Russia over its invasion of Ukraine, the US  now faces a dilemma in dealing with its strategic and defence partner, India, whose military remains dependent on Moscow for its operability.

The US, along with all its North Atlantic Treaty Organisation (NATO) partners, and other countries, have sanctioned some 113 Russian arms manufacturers, including their design bureaus and related entities at home and in surrounding, friendly countries – the majority of which collectively continue to support over 60% of India’s military assets.

Many service officers in New Delhi agreed that sanctioning all these concerns would proscribe, if not ultimately terminate, their ability to transfer either contracted-for platforms and equipment or critical spares and components, or both, for India’s Russian-origin combat and transport aircraft, helicopters, tanks, warships, submarines and missiles and varied ammunition. India’s Ministry of Defence (MoD) and the three service chiefs too, over the past week, discussed this emerging situation that could imperil the military’s operational efficiency, but reportedly arrived at no solution.

Hence, in this rapidly unfolding scenario of unforeseen consequences, the US finds itself hoist with its own petard in its dealings with India. Its prevailing predicament, centred principally on punishing Moscow for its bellicosity via sanctions, also required it to somehow simultaneously ensure, albeit in lesser measure, that India’s military continues to operate its predominantly Russian arsenal to counter and deter hegemonic China. After all, over the past two decades, India had emerged as a close US defence and strategic ally and an undeclared, but palpable and willing ‘frontline’ state against Washington’s longer-term enemy, China.

Thus, tightly enforcing sanctions on Russia would eventually result in steadily demilitarising India, especially at a juncture when it faces a persistent military threat along its mutually disputed northern border with nuclear rival China. Alternatively, it was entirely unthinkable for the US to ‘subtly enable’ an informal Delhi-specific sanctions by-pass or somehow turn a Nelson’s Eye to the punitive embargoes imposed on Moscow merely to hand-hold India’s military. 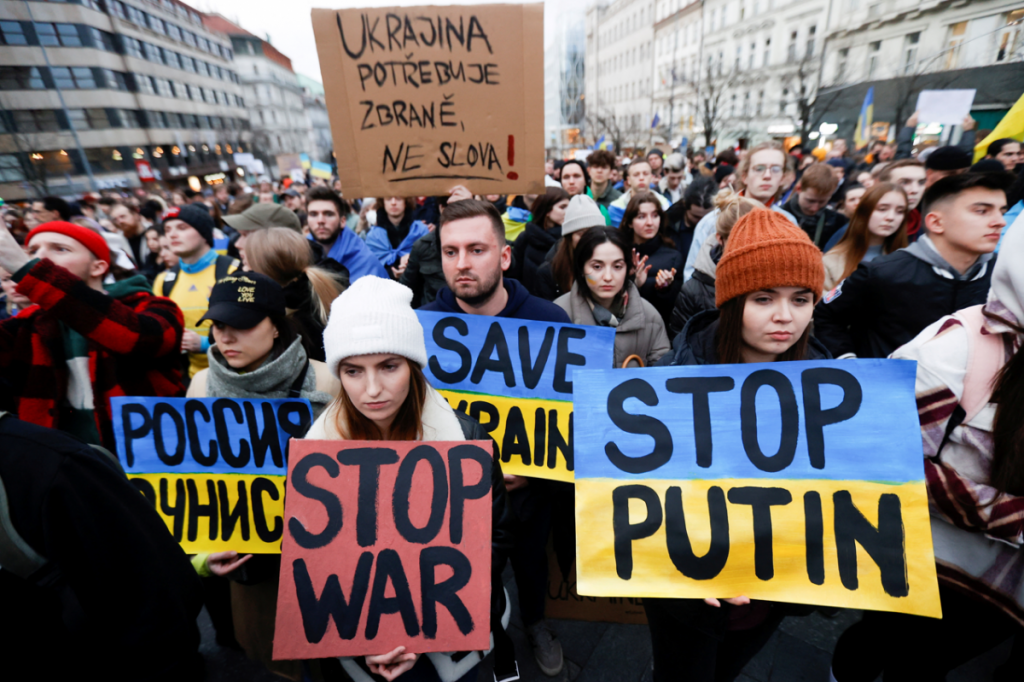 A cursory scrutiny of the scope of sanctions on the Russian arms industry is instructive, as it reveals the extent to which these entities – which will now find their broader functioning impaired –impact the weaponry fielded by India’s armed forces.

“The Ukraine war has hurtled the evolving strategic symbiosis between Delhi and Washington into total and complete bewilderment and confusion, by forcing Delhi to choose sides, which it simply cannot do so at present,” said a two-star Indian Navy officer. Alarmingly, it had also spawned a wholly abnormal situation in which alternatives appeared seemingly insoluble and unworkable for now, he added, declining to be named as he was not authorised to speak on sensitive matters.

Over the past two decades, India had deftly managed its strategic autonomy and its materiel interdependence on both Russia and the US. In recent years, however, under US commercial pressure and aggravated by recurring problems with Russian equipment, spares and components scarcities and poor after-sales service, India had considerably reduced its defence kit reliance on Moscow. According to the Stockholm International Peace Research Institute (SIPRI), Russian arms sales to India between 2016-20 had declined by around 53%.

Conversely, US arms sales to India had steadily soared from 2001 onwards, after punitive sanctions on Delhi for its serial Shakti underground nuclear tests at Pokhran in May 1998 were lifted, rising to around $20 billion at present. Numerous other procurements worth another $5-6 billion are currently under negotiation, and both countries have also signed a slew of agreements to jointly develop military equipment under the 2012 Defence Technology and Trade Initiative.

Over the past two decades the IAF had inducted 22 ‘AH-64E(I)’ Apache Guardian and 15 Chinook CH-47F heavy-lift helicopters for the IAF and 12 P-8I Neptune long-range maritime multi-mission aircraft for the Indian Navy, all manufactured by Boeing. Six additional Apaches were on order for the Indian Army, while the Indian Air Force had also commissioned 12 Lockheed Martin C130J-30 and 11 Boeing C-17 Globemaster III transport aircraft.

In 2016, the Army had signed up for 145 BAE Systems M777 155mm/39 calibre lightweight howitzers- of which around 100 had been delivered – in addition to taking delivery of  72,400 SIG716 assault rifles from Sig Sauer in 2019. And, in September 2020, the Indian Navy had leased two non-weaponised General Atomics Aeronautical Systems Inc (GA-ASI) Sea Guardian unmanned aerial vehicles (UAVs) from the US to monitor the Indian Ocean Region (IOR), making it an impressive overall portfolio of US materiel.

Indian private sector defence contractors in Hyderabad too, since 2014 had been manufacturing empennage assemblies for C-130J-30s, which included its horizontal and vertical stabilisers and its tail section, while several components for the Apache and Chinook rotary-wing aircraft too were locally built and exported to the US for integration onto both platforms.

Moreover, in 2008-09, India joined the US-dominated Quadrilateral Security Dialogue or Quad- alongside Australia and Japan – which has burgeoned in recent months, primarily as a strategic anti-China grouping in the Indo-Pacific and the IOR. The US military also regularly conducted the largest number of bilateral exercises each year with India than with any other country, and furthermore, both sides regularly exchanged military intelligence and collaborated in multiple security forums, especially in the naval arena.

“Considering the proliferating military commerce that the US has with India and related co-operation, it would be imprudent for Washington to alienate Delhi over the Russian sanctions issue,” advised Amit Cowshish, former Ministry of Defence (MoD) acquisitions advisor. But how both sides will manage to eventually resolve this intricate alchemy triggered by sanctions, remains presently unknown, he added. 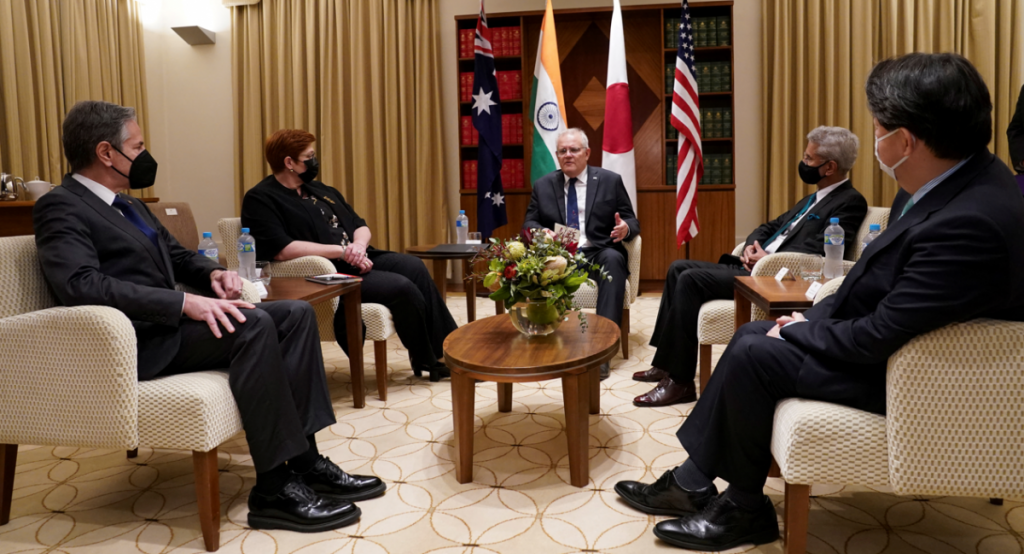 Will US ‘look away’ again?

Other analysts and defence officials suggested that perhaps the US’s ‘look away’ or ‘ignore’ approach towards India adopted over its Countering America’s Adversaries Through Sanctions Act (CAATSA), might provide a clue. For much like the present embargoes, CAATSA – approved in 2017 in response to Russia’s occupation of Crimea in 2014 and its alleged interference in the 2016 US elections – too had sanctioned Moscow’s vast military-industrial complex five years ago. But the Act was aimed primarily at countries that had deployed Russia’s S-400 Almaz-Antey Triumf self-propelled surface-to-air missile system.

Accordingly, in September 2018 the US invoked CAATSA against China over installing its S-400 system and similarly against Turkey two years later in December 2020. But it desisted from doing so against India, which recently erected its first of five S-400s it had acquired in 2018, at an IAF base in Punjab. The IAF awaits delivery of the remaining four S-400s, with a second training module scheduled for arrival sometime in April, but unlikely to meet its deadline due to sanctions.

For several years, senior US officials had dithered over activating CAATSA against India, and last week Assistant Secretary of State Donald Lu reiterated this reluctance to the Senate Foreign Relations Committee in Washington. When asked by a committee member about enforcing CAATSA against India for its S-400 deployment, Lu declared on March 2 that “India is a really important security partner of ours now and we value moving forward that partnership”.

When pressed further, he expressed his inability to ‘prejudge’ US President Joe Biden’s decision to grant India a CAATSA waiver. Under the Act, the US president possessed ‘waiver authority’ for ‘certain sanctionable transactions’. Earlier, US defence secretary Lloyd J. Austin III during his Delhi visit a year ago, had deftly side-stepped all queries about CAATSA, stating that the question of sanctions was ‘not on the table,’ as India had not yet taken delivery of the S-400s despite having signed up for them.

India continued to lobby hard for a CAATSA bypass, with external affairs minister S. Jaishankar arguing that Delhi had a comprehensive global strategic partnership with Washington, and conversely a special and privileged strategic alliance with Moscow. Both relationships, he reasoned, were independent of the other in an argument that endured.

India had also assured the US that it would safeguard the ‘technical and operational secrecy’ of its growing arsenal of US-origin equipment from the S-400 systems, in addition to reducing its dependency on Russian materiel. Significantly, the US had not objected at the time to Delhi signing multiple deals with Russia alongside that for the S-400s for four stealth frigates, leasing of a nuclear-powered submarine and procuring 601,427 Kalashnikov Ak-203 assault rifles, amongst other purchases. All these buys, however, were now jeopardised under sanctions but despite CAATSA deemed acceptable previously, as they bolstered India’s military capability to counter China, a move the US firmly backed as part of their shared strategic objective. 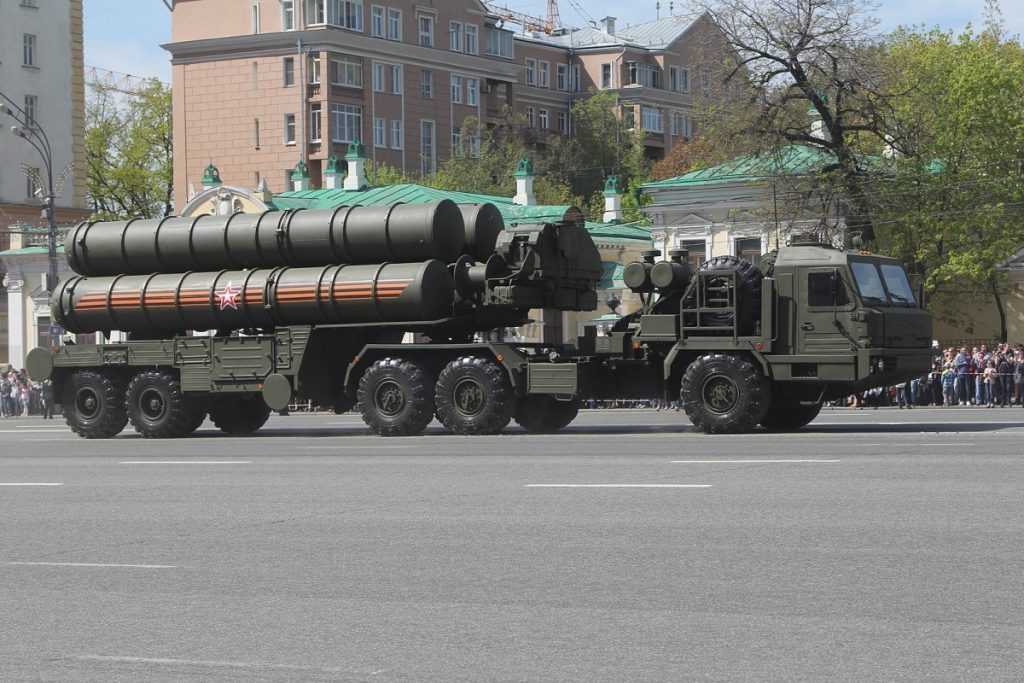 Late last year, India was supported in its CAATSA-avoidance endeavours by three Republican senators, who introduced an adroit amendment in Congress to the National Authorisation Act to make it more difficult for Washington to impose the CAATSA on Quad members. Termed Circumspectly Reducing Unintended Consequences Impairing Alliances and Leadership Act (CRUCIAL), 2021, the amendment stated that CAATSA would only weaken security in the Indo-Pacific region and if approved, would be valid for a decade.

“Now would be exactly the wrong time for President Biden to undo all of that progress (in partnering India) through the imposition of these sanctions,” Ted Cruz, one of the three Republican senators behind CRUCIAL declared in a statement last November. Doing so, he added, would accomplish nothing except undermine our shared security goals of combating China’s aggression and forcing India to become dependent (for defence equipment) on Russia.

In conclusion, equally perplexed Indian military and defence officials said that if Delhi did somehow manage to source Russian military equipment or spares via some jugaad or financial innovation, Washington would, under US law, be bound to sanction it as the buyer. But technically, they pointed out that the US could, if it desired, sanction a junior MoD officer or some related entity that did not ultimately impinge directly on India’s military preparedness.

One retired three-star IAF officer told The Wire that the US’s typical ‘transactional’ approach towards all its allies and strategic partners could well determine the road ahead with regard to sanctions. Washington’s attitude, he said, was dictated largely by the characteristic American aphorism that ‘There ain’t no such thing as a free lunch’, better known in its abbreviated form TANSTAAFL. Perhaps, he anticipated, this simple aphorism signified an achievable trade-off of some kind to help mitigate the Indian military’s nightmarish predicament, which the global sanctions on all Russian defence entities present.