Senior military officers said that in view of the Russian offensive, ongoing projects to upgrade aircraft and supply missiles would be interminably delayed, if not eventually terminated. 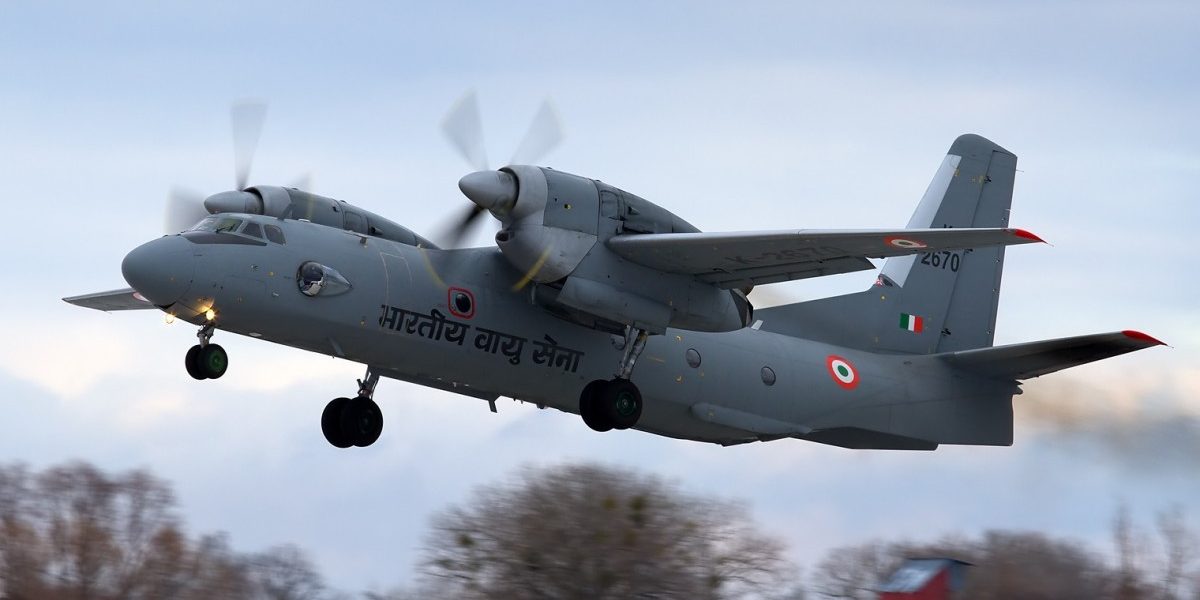 New Delhi: Ukraine’s invasion by Russia will damagingly impact several of India’s ongoing programmes that could, in the medium term, compromise its prospective operational efficiency.

These projects include upgrading the Indian Air Force (IAF)’s fleet of Antonov An32 ‘Cline’ transport aircraft and supplying critical R-27 air-to-air missiles for its multi-role Sukhoi Su-30MKI fighters and providing engines for four Indian Navy (IN) guided missile frigates, amongst other assorted bilateral military contracts under review and negotiation.

Senior military officers told The Wire that in view of the Russian offensive, all these ongoing projects would be interminably delayed, if not eventually terminated, as the invasion’s outcome and Ukraine’s future contours remained nebulous. Declining to be identified, they said the obvious priority for Ukraine’s large defence industry, once a significant component of the Soviet Union’s military complex, would obviously be to arm itself, rather than luxuriate in executing overseas orders.

“The Indian military will have to seek alternatives quickly, as it too faces a dire security situation in its neighbourhood,” a three-star IAF officer said. Russia being sanctioned heavily too bodes ill for India as it is heavily reliant on materiel from Moscow, he cautioned.

The biggest adverse fallout for India of the Russian attack on Ukraine centres on the upgradation of around 60 IAF twin-engine An-32s, needed to ferry materiel, cargo and personnel to Ladakh. These transports were needed to sustain the Indian Army (IA)’s continuing deployment against China’s People’s Liberation Army (PLA) since May 2020, along the mutually disputed Line of Actual Control (LAC).

Like most Indian defence contracts, the one with Ukraine for the An-32 retrofit too had an agonising history.

In 2008, the Ministry of Defence (MoD) had signed a $400 million contract with Ukraine to upgrade the IAF’s 105-strong An-32 fleet by overhauling the transports Ivchenko AI-20 turboprop engines and airframes and fitting the platforms with advanced avionics, navigation and communications equipment.

The retrofit project, aimed at keeping the An-32s in IAF service for another 15-20 years, also included upgrading the aircraft’s cockpit layout, reducing noise and vibration levels and easing the maintainability of the platform that entered service in India 1984 onwards. The IAF was Russia’s first foreign customer for the An-32s which were designed and constructed by the Antonov Design Bureau in Ukraine.

The upgrade programme, however, stalled in 2014, after 40 An-32s had been retrofitted, as Russia refused to supply Ukraine with critical navigation, communication and onboard oxygen generating equipment for the retrofit, following a breakdown of ties between Kiev and Moscow over Russia’s annexation of Crimea.

Sensing problems and unwilling to abandon a lucrative contract, as well as the prospect of future tenders, Ukraine developed alternatives to the Russian-made systems and readied itself to begin transferring them to the IAF for fitment onto the An-32s at the force’s Base Repair Depot or BRD in Kanpur.

Thereafter, in January 2019, India and Ukraine agreed to resume the An-32 retrofit and the former began transferring the upgrade kits to the BRD for installation onto the platforms. Kiev also assured the MoD and the IAF that it would complete the upgrade at the previously agreed price of $3.8 million per aircraft. Work on the upgrade resumed some months later, but remains far from complete, but the overall project was deemed a success as the An-32s ably demonstrated their agility in operating from rudimentary advanced landing strips in mountainous terrain in the Ladakh region in all types of weather. 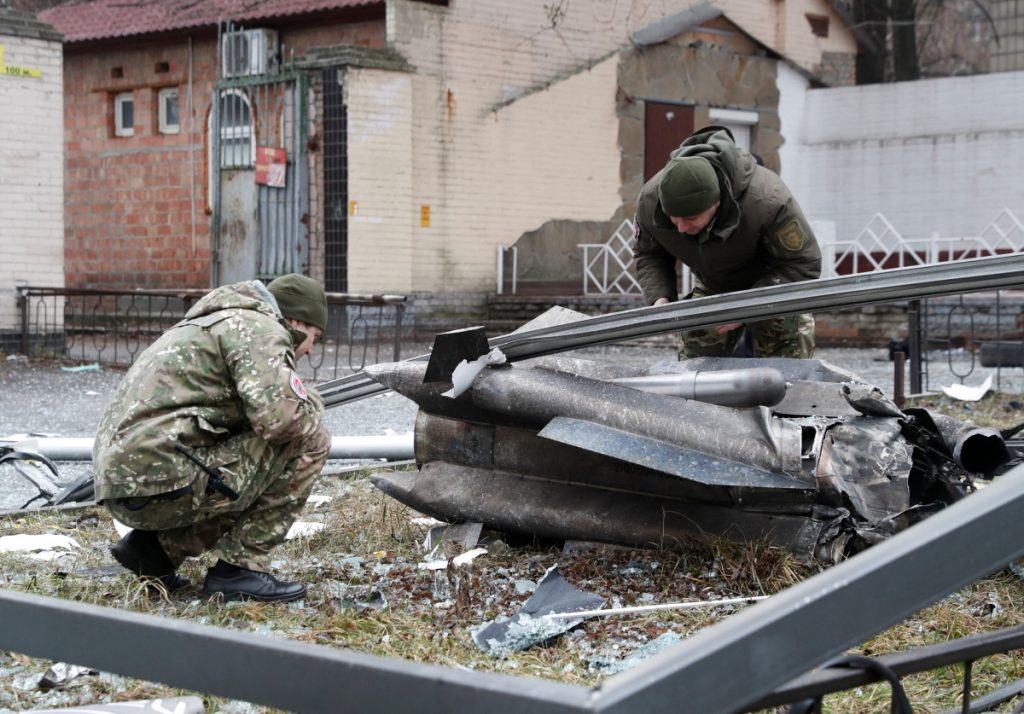 Police officers inspect the remains of a missile that fell in the street, after Russian President Vladimir Putin authorized a military operation in eastern Ukraine, in Kyiv, Ukraine February 24, 2022. Photo: Reuters/Valentyn Ogirenko

Alongside, Ukraine had developed strong diplomatic, security and defence relations with New Delhi, also offered India, at competitive prices, its latest Antonov An-178 short-range medium airlift transporter, as an eventual replacement for the IAF’s An-32. The proposal, however, made no progress as the IAF had already started acquiring Lockheed Martin C-130J and Boeing C-17 Globemaster III transports from the US.

And, in 2018, India signed a Rs 1,000 crore deal with Ukraine to supply eight Zorya-Mashproekt M7N1E gas turbines to power the IN’s four Admiral Grigorovich Project 1135.6M stealth frigates, two of which would be built in Russia’s Yantar Shipyard and two at the public sector Goa Shipyard Limited (GSL), under a transfer of technology agreement.

The MoD had signed a $950 million Inter-Governmental Agreement (IGA) with Russia in October 2018 for the first two frigates, and a separate $500 million contract with GSL a month later for the remaining two. As all four frigates would be powered by Ukrainian gas turbines. India had deftly negotiated delivery, of four power packs to Yantar Shipyard directly for the two frigates it was constructing, as ties between Kiev and Moscow remained hostile over Crimea’s take over.

The remaining four power packs were to be delivered directly to the GSL that laid the keel of the two frigates in January and in June 2021. It is, however, unclear for now, whether these Ukrainian turbine deliveries had been completed to Russia, which launched the first frigate – named Tushil – late last year.

Ukraine also series builds variants of the Vympel R-27 air-to-air missile for the IAF’s Su-30MKI ‘Flanker-H’ fighters with a 75km strike range armed with a 39 kg warhead, but their deliveries too were likely to immediately cease, with little or no prospect of resumption for now.

And earlier, in February 2021 Yuriv Husyev, head of Ukroboronprom, Ukraine’s equivalent of Russia’s Rosoboronexport that manages sales of all military, dual-use products and services overseas had declared that Kiev had signed four agreements worth $70 million India for new weapon systems and maintenance and upgrade of existing ones, but had declined to elaborate.

Also Read: ‘Sirens on Since 4 AM’: Indians Describe Chaos, Confusion in Ukraine After Invasion

Ukraine’s defence industry was a significant part of the Soviet military complex, responsible for 30% of Moscow’s materiel production and some 40% of its scientific research. A large number of Soviet intercontinental ballistic missiles (ICBMs) were built In Ukraine, as were several naval assets including warships, propulsion systems and at least one aircraft cruiser which, however, remained incomplete.

Construction of this Kuznetsov-class cruiser named Riga – later renamed Varyag – for the Soviet navy began in 1985 but was discontinued in 1991 following the dissolution of the Soviet Union. Thereafter, the incomplete platform was acquired by China and commissioned into the People’s Liberation Army Navy as the Liaoning aircraft carrier in late 2012 or as Type 001, the lead vessel in its class and the template for at least four or five more similar platforms.

At the time Ukraine declared independence in 1991, it had 1,840 defence and related enterprises and research centres, with advanced expertise in missile and shipbuilding and employed nearly three million scientists, technicians, engineers and skilled workers. But it was not a cohesive industry, with fragments of it distributed across Russia and other portions of the former Soviet Republic.

Furthermore, the lack of legislation led to illegal trafficking of Ukrainian materiel till eventually, in 1996 the state assumed control of the country’s entire defence industry under the overarching banner of Ukroboronprom. It then began concentrating on niche areas like transport aircraft, diverse missile systems and engines which, regrettably, were almost certain to become unavailable to India at a time when it needed them the most.