Rafale Deal: The Mystery of the 3-Billion-Euro Price Hike

How did the benchmark price for 36 Rafales go up from 5.2 billion euros to 8.2 billion euros and on what basis did the Modi-led Cabinet Committee on Security agree to pay more per plane than the MMRCA RFP had envisaged for the same configuration?

From the judgment, it is clear that the bench believed that the pricing details had been shared with the CAG and that the report of the CAG was examined by the PAC. Credit: PTI/Ravi Choudhary

New Delhi: On November 14, the Supreme Court reserved its verdict on the PIL questioning the Modi government’s controversial decision to purchase 36 Rafale fighter jets from France in flyaway condition by cancelling the then 95% negotiated RFP for 126 aircraft.

On the same day, drawing on internal correspondence between the ministries of law and defence, The Wire had reported how the Modi government failed to secure from France a sovereign guarantee for the deal’s implementation and settled instead for a ‘letter of comfort’. The issue also figured prominently in the court’s hearings.

The only problem with such a letter – says Sudhanshu Mohanty, who was the Financial Advisor (Defence Services) in the Ministry of Defence from October 2015 to May 2016 – is that it “provides no comfort at all”. It was during his tenure that the deal for 36 Rafales was negotiated. Prior to becoming FA in MoD, Mohanty was the Controller General of Defence Accounts (CGDA). Speaking to the Economic Times a day after the Supreme Court wrapped up its hearings, he said that the bench mark price (BMP) set for 36 Rafales at the start of the negotiation by the contract negotiation committee (CNC) was 5.2 billion euros but that later it was increased to 8.2 billion euros. What he said is worth quoting in full:

“It has been brought out that the negotiating team came up with a benchmark price that was overruled by the ministry. It wouldn’t be fair on my part to comment on the benchmark price. The more relevant question that needs to be asked is: On what grounds was this overruled? What logic and justifications were adduced on file to overrule the points made by senior ministry officials who negotiated the contract? Further, as per the information available in public domain, the Defence Acquisition Council headed by the defence minister and consisting of all top MoD honchos didn’t recommend the case, and instead left it to the Cabinet Committee on Security to take a call. Why? This needs to be looked into. For, not in my fallible memory of defence capital acquisition can I recall such a thing — because it is strange, even queer.”

This is very important because the government submitted a detailed answer in the Supreme Court (though it was undated and unsigned and was not an affidavit) saying it had followed all the guidelines prescribed by the Defence Procurement Procedure (DPP) 2013.

Since the prescribed procedure would presumably have involved the DAC recommending a case and not leaving it to the CCS,  the government’s claim that it followed all the steps prescribed by the procurement guidelines does not appear to be accurate.

Para 51 of DPP 2013 states: “In all cases, CNC (Contract Negotiation Committee) should establish a benchmark and reasonableness of price in an internal meeting before opening the commercial offer.”

Para 26 of the government’s reply to the Supreme Court states: “The INT (Indian Negotiating Team) report was finalised and signed on July 21, 2016.” And it boasts of how the INT negotiated “better price, delivery and terms in comparison with 126 MMRCA case”.

Para 27 confirms, “Chairman of INT submitted the report on August 4, 2016 and recommended the case to be progressed for CCS (Cabinet Committee on Security) approval and signing the IGA (Inter Government Agreement).” “The proposal was placed before the CCS on August 24, 2016. The approval of Cabinet Committee on Security for the signing of the IGA for procurement of 36 Rafale aircraft was accorded on August 24, 2016.”

Here is the contradiction. When the negotiations started in May 2015 (as per para 25 of the government’s answer to the Supreme Court) an expert committee led by MoD official M.P. Singh (advisor-cost) determined the benchmark price to be 5.2 billion euros. Singh and his colleagues were over-ruled by others in the ministry but even so, the DAC “didn’t recommend the case” and kicked the ball up to the CCS. And it was the CCS which took the decision to accept the hike in the benchmark price.

In other words, if the benchmark price had to be increased at the last minute by the CCS – basically a group of ministers led by Prime Minister Modi and comprising Arun Jaitley, Manohar Parrikar, Rajnath Singh and Sushma Swaraj – who have no technical know-how or expertise in the subject matter, how can the government say it followed all the procedures? It is apt to remember here that the three MoD officials – Rajeev Verma, (then) joint secretary (Air), A.R. Sule (then) finance manager (Air) and M.P. Singh himself – raised objections on the revised benchmark price and they were either transferred or sent on leave as the government bulldozed its way.

The irony is that the entire controversy over the price of the 36 Rafales can be traced back to this hike in benchmark price. Had the government stuck to the 5.2 billion euro benchmark price, it would have produced a price similar to what was “discovered” via the 126 MMRCA RFP process.

As Ajai Shukla has reported in the Business Standard, the total cost of the 126 Rafales under the MMRCA deal RFP was 19.5 billion euros and included the same configuration of weapons and other related accessories and terms and conditions in comparison to the Modi government’s deal, which costs 7.8 billion euros for 36 aircraft in flyaway condition from France, 2 billion euros more than what the cost might have been if the MMRCA RFP had been used as the benchmark.

Buckling on the arbitration issue 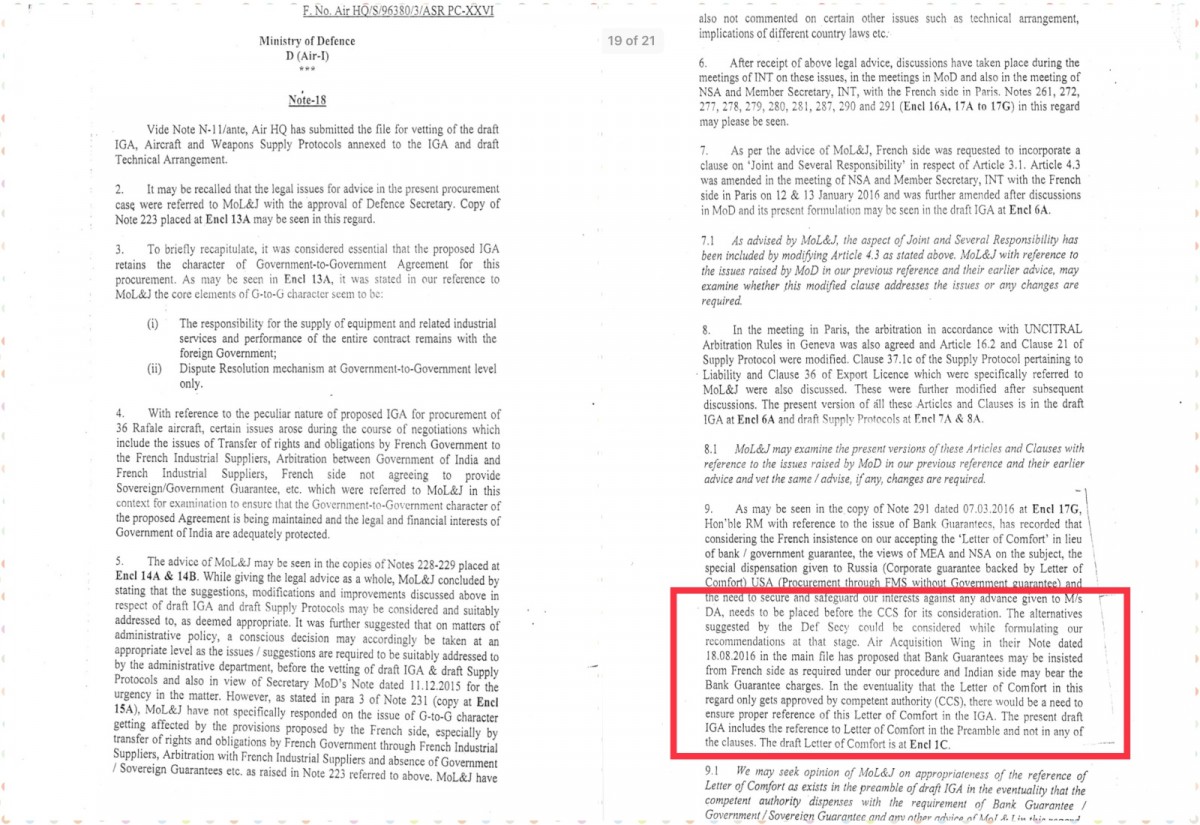 A 2016 note from MoD on the Rafale negotiations accessed by The Wire makes it clear that on French insistence, the Modi government agreed to change the seat of arbitration out of India. And it clearly mentions that the government didn’t insist on a sovereign guarantee or adequate bank guarantee.

It says in para 3: “To briefly recapitulate, it was considered essential that the proposed IGA retains the character of Government to-Government Agreement for this procurement. As may be seen in Encl 13A, it was stated in out reference to MoL&J the core elements of G-to-G character seem to be:

Para 4 reads: “With reference to the peculiar nature of proposed IGA for procurement of 36 Rafale aircraft, certain issues arose during the course of negotiations which include the issues of Transfer of rights and obligations by French Government to the French Industrial Suppliers, Arbitration between Government of India and French Industrial Suppliers, French side not agreeing to provide Sovereign/Government Guarantee, etc. which were referred to MoL&J in this context for examination to ensure that the Government to Government character of the proposed Agreement is being retained and the legal and financial interests of Government of India are adequately protected.”

Para 5 says : “….While giving the legal advice as a whole, MoL&J concluded by stating that the suggestions, modifications and improvements discussed above in respect of draft IGA and draft Supply protocols ma1, be considered and suitably addressed to, as deemed appropriate. It was further suggested that on matters of administrative policy, a conscious decision may accordingly be taken at an appropriate level as the issues / suggestions are required to be suitably addressed to by the administrative department before the vetting of draft IGA & draft Supply Protocols and also in view of secretary MoD’s note dated l l.12.2015 for the urgency in the matter. …. However, as stated in para 3 of Note 231 (copy at Encl 15A), MoL&J have not specifically responded on the issue of G-to-G character getting affected by the provisions proposed by the French side, especially by transfer of rights and obligations by French Government through French Industrial Suppliers, Arbitration with French industrial suppliers and absence of Government / Sovereign Guarantees etc. as raised in Note 223 referred to above. MoL&J have also not commented on certain other issues such as technical arrangement, implications of different country laws etc.” 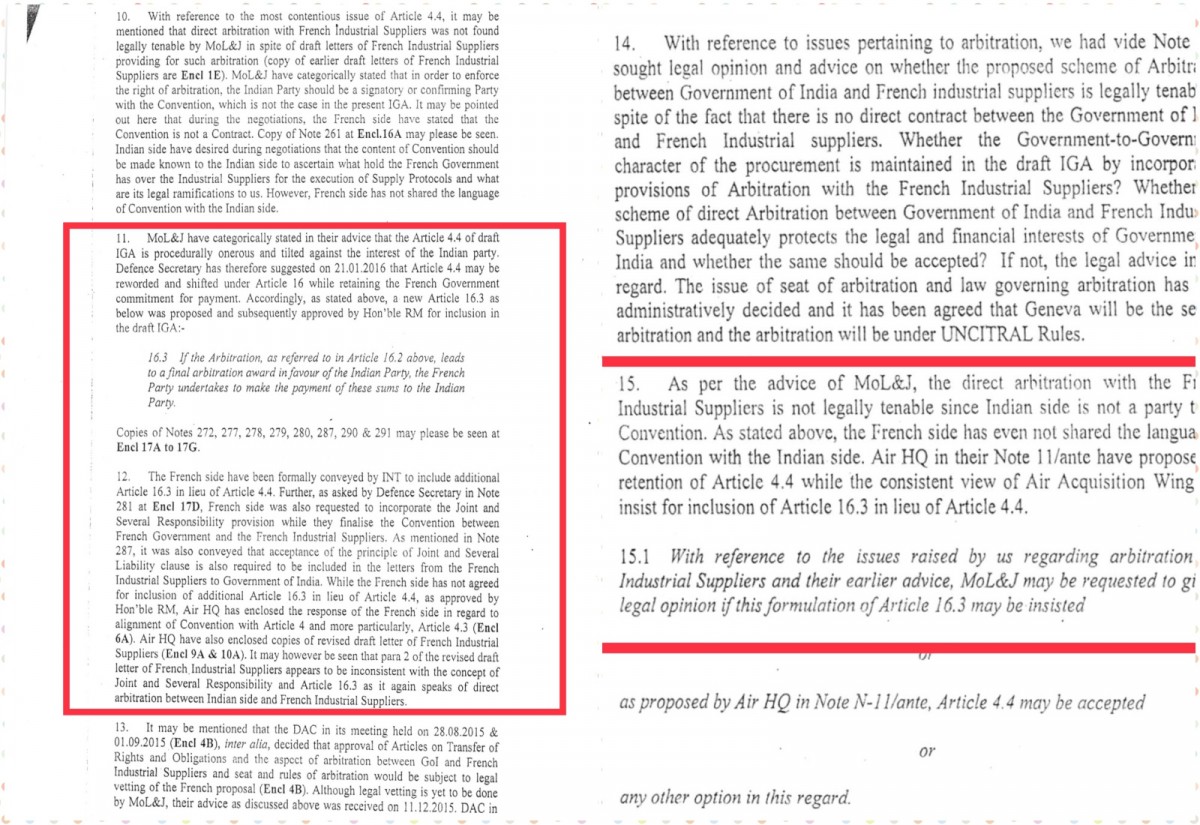 Para 6 Reads: “After receipt of above legal advice, discussions have taken place during the meetings of INT on these issues, in the meetings in MoD and also in the meeting of NSA and Member Secretary, INT, with the French side in Paris”.

Para 7 says: “As per the advice of MoL&J, the French side was requested to incorporate a clause on  ‘Joint and Several Responsibility’ in respect of Article 3.1. Article 4.3 was amended in the meeting of NSA and Member Secretary, INT with the French side in Paris on 12 &. 13 January 2016 and was further amended after discussions in MoD.”

These notes make it evident that National Security Advisor Ajit Doval was the person who facilitated the acceptance of a “Letter of Comfort” from France instead of a sovereign guarantee.

In a nutshell, none of the committees comprising experts and bureaucrats approved the 3 billion Euro hike in benchmark pricing, but it was the Cabinet Committee on Security headed by Prime Minister Modi which decided on it. And it is the same CCS which agreed on a letter of comfort from France instead of a mandatory sovereign guarantee on a G to G deal.

It is hard to see how the Modi government could have told the Supreme Court that the procurement contract for 36 Rafales was according to the procedures set in DPP 2013.