Am I not a 'True Patriot' If I'm Against Using Violence to Avenge Pulwama?

Even at this moment of mass hysteria, it is difficult for me to speak of revenge, or celebrate the mob mentality that 'violence is the only answer to violence'. 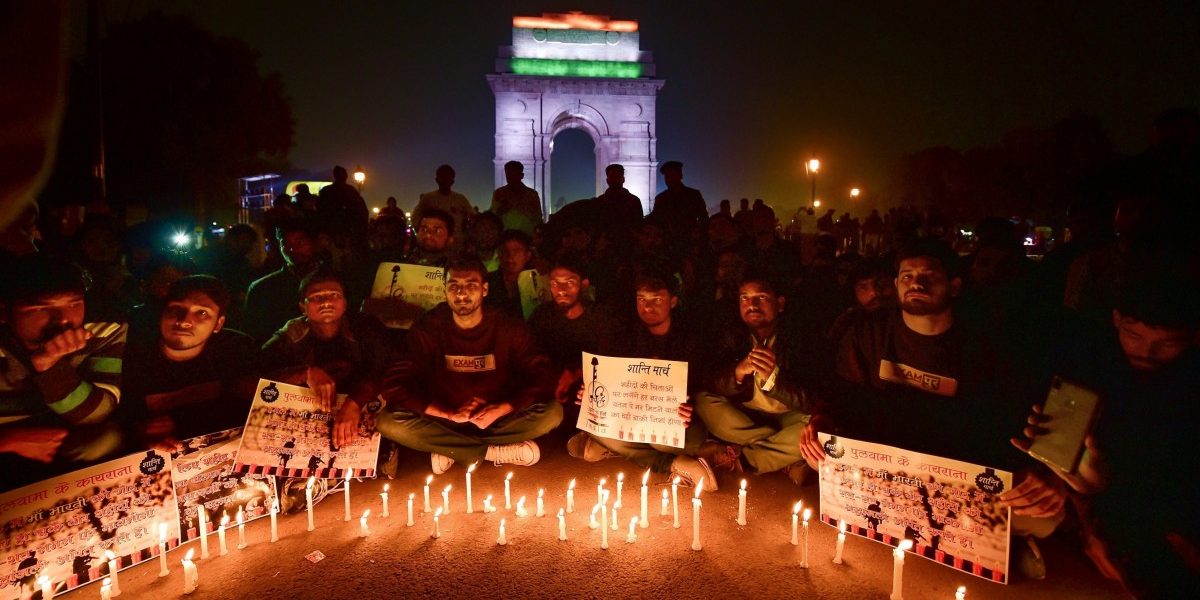 I have not yet visited Kashmir, but it continues to fascinate me. Though, as a teacher, I am fortunate to have met some bright young minds from the region. Their softness, cultural fineness and grace have always enchanted me. No wonder, the typical image of Kashmir as disseminated through television channels – army convoys, stone pelters, curfew and empty streets – causes pain as well as fear. Indeed, the violence that has become part of the Valley disturbs me.

I find it difficult to stereotype Kashmir as a war zone, and classify its people as ‘potential terrorists’. Instead, I try to understand the anxiety that a Kashmiri mother often experiences as her son leaves the house. Or, for that matter, what my Kashmiri student – a sensitive girl with a deep affinity for Allama Iqbal’s poetry – means when she says that whenever she sees an army convoy, her body begins to tremble.

I also try to understand what a young woman in a remote village of Uttarakhand goes through when her husband has to leave her and their child to join the CRPF camp in Kashmir.

Possibly, a simple teacher like me who cannot think like an army general begins to pray in silence: Let the brutality of terrorist violence not brutalise us, and let us gain the wisdom to come out of the psychology of revenge.

But then, am I behaving like a true patriot? Am I running away from the ‘necessity’ of war: another tough response to Pakistan, another surgical strike, another militaristic reminder to the Kashmiri youth of the might of the Indian state? These questions become existential, political and ethical.

Using the subaltern for our war game

I open the morning newspaper. The Indian Express headline ‘Grief and Resolve’ catches my attention. I see the picture of 60-year-old Banamala – devastated and crying. Her son, Bablu Santra would never return home. Let us try to understand the circumstances of this head constable.

“Bablu Santra was scheduled to be home on March 3, to get his new two-storey house painted. And in another eight months, he was to return home forever … Bablu is survived by his wife, Mita, and daughter Piyal (6).”

Or, for that matter, think of Naseer Ahmed – yet another head constable who was killed in the attack.

“Ahmed was among the CRPF personnel who took part in the rescue operations during the 2014 floods in Pulwama. Five years later, he died in a terror attack at the same place. He is survived by wife Shazia Kousar and two children, Falaq, 8, and Kashes, 6. Ahmed was the youngest among six siblings. His elder brother Siraj Din is in the state police and posted at Jammu. He was planning to settle in the village after seeking premature retirement.”

From Rohitash Lamba of Rajasthan to Maneswar Basumatary of Assam, and from Mohan Lal of Uttarakhand to H. Guru of Karnataka, it is the same story of pain and loss. All of them belong to what a hierarchical society would regard as the ‘subaltern’ class. A job in the army, a dream of a two-storey house in a village and some savings for a parent’s medical care – these narratives remind us that ‘patriotism’ isn’t necessarily what drove them to enlist, they were compelled to be in the war zone because of their economic or personal circumstances.

They were not like us, or those noisy television anchors who live in gated communities in Delhi and Mumbai, and who send their children to boarding schools or universities abroad and stimulate the mass sentiment of revenge, war and loud patriotism.

Even though people like us would speak of their bravery and patriotism, and ministers and diplomats would recommend bestowing awards on them, the harsh reality is that it is the poor or the subaltern who have died, and with the passage of time we might not even bother to learn of the tormented journeys of their family members. And who knows, their children might drop out of school and exist with the trauma of an ‘inexplicable’ tragedy.

This is also the moment when I wonder how someone like Ulma Devi, who is waiting for her son Amit Kumar’s body to reach her, would react to Prime Minister Narendra Modi’s instant promise of muh tod jawab (befitting reply). Possibly, at this intense moment of pain and loss, she would give her consent to Mr Modi, and would want the killers of her son to suffer.

But then, it may not be altogether impossible for her to think that we need to strive for yet another world free from war, and no mother – even the mother of a Pakistani agent – should have to experience such trauma. Or who knows, she might even ask why is it that these ministers, diplomats, television anchors do not send their children to Kashmir to prove their ‘patriotism’ and only people like them have to carry the heavy responsibility of ‘saving’ India from militants and terrorist groups?

At this juncture, I too face a dilemma. It becomes difficult for me to say: Start yet another war. Initiate the process of yet another surgical strike.

Who is fighting against whom?

People in Kashmir are not very different from us. They too live amid light and darkness, with good and evil, and hope and pessimism. But then, the politics of the sub-continent, the narcissism of the two nation-states and the breakdown of trust are responsible for creating a mindset that attaches more value to the land rather than the people who inhabit it.

Can Kashmir be the integral part of the spirit of India, or for that matter Pakistan, if these two states look at it merely through a strategic/militaristic angle for ‘possession’? What does it mean to conquer Kashmir – a Himalayan wonder transforming itself into a site filled with dead bodies and broken limbs, puzzled by encounter deaths and young men disappearing and eventually joining a terrorist group like Lashkar-e-Taiba?

I find no convincing answers. Meanwhile, I keep thinking of ‘suicide bombers’ and what compels a person to become one. Possibly the belief that he has to give a distinct meaning to his death. He may have valid reasons to be angry, wounded and discontented. However, in the absence of liberating education and alternative politics, he becomes a militant or terrorist – and in the process of killing himself, he kills others. His quest for a meaningful death degenerates into a nihilistic act of collective suicide.

Is it that somehow we – the ‘civilised nationalists’, ‘heroic army generals’, ‘university-educated’ diplomats and strategists and ‘democratically-elected’ political masters – have created a toxic environment that gives birth to ‘suicide bombers’, and compels the poor and the subaltern to leave their dearest ones, engage in war and ‘protect’ us?

But then, who is fighting against whom?

Think of Ghulam Hassan Dar – father of the ‘suicide bomber’ Adil Ahmad Dar – and try to feel the intensity of his loss. Is it any different from that of Banamala Santra, who too lost her son at Pulwama? It is pain that unites us. In death, a martyr and a terrorist are united. We – the clever ones –divide them for our selfish games.

Even at this moment of mass hysteria, I am contemplating, and it is becoming difficult for me to speak of revenge, or celebrate the mob mentality: ‘Violence is the only answer to violence’.

Am I ridiculously idealistic or is it that I am not ‘masculine’ enough to become a true ‘patriot’?