Explainer: Is No One Guilty in the Mecca Masjid Blast?

All those accused in the case were acquitted on Monday. Curiously, the judge who gave the verdict resigned soon after, on Monday evening, citing personal reasons that he said were unrelated to the case.

The role of NIA is also likely to be hotly debated as it failed to prove anyone’s guilt after pursuing investigations against the accused for more than seven years – after taking the case over from the CBI. The abrupt removal of Pratibha Ambedkar, the officer-in-charge of the case who was transferred two weeks ago, raises further questions about the conduct of the NIA.

The NIA’s role in investigating the cases related to Hindutva terror has been doubtful, with many suggesting that the Modi government was trying to pressurise the NIA to “go soft” on the cases during the trial.

How the Mecca Masjid case unfolded

Soon after the 2007 blast, the police suspected the role of a Pakistan-based Islamist group, Harkat-ul-Jihad-e-Islami (HuJI), but investigations over the next few years pointed at the possible role of Hindutva organisations.

Subsequently, fringe Hindutva organisations like Abhinav Bharat were held responsible for a series of blasts that took place between 2006 to 2008. The most significant of them were blasts in the Samjhauata Express (2007), Ajmer Sharif (2007), Malegaon (2006) and Mecca Masjid (2007). In the years after these blasts, Naba Kumar Sarkar (better known as Swami Aseemanand), Pragya Singh Thakur and Lt Col Shrikant Purohit were taken into custody for allegedly leading the blasts at various places.

Following the blast, the Andhra Pradesh police held more than 200 people, mostly Muslims, according to various reports, for interrogation. Twenty-one of them were chargesheeted, the Hindustan Times reported. The police named a person called Bilal, allegedly a HuJI operative, as the mastermind. When he was killed in police firing, various human rights organisations raised their voices as they thought the encounter was fake. In January 2009, Bilal was acquitted by a local court as the police failed to provide credible evidence against him.

Following this, the case was transferred to the Central Bureau of Investigation (CBI), which investigated the bombings for around two years. As the involvement of various Hindutva organisations in different blasts kept coming out, the CBI pointed to the role of such extremist groups in the Mecca Masjid blast too. It filed a chargesheet against three people, all of whom were linked to the larger Sangh parivar – RSS pracharak Devender Gupta, property dealer and Hindutva activist Lokesh Sharma, and his leader Sunil Joshi.

Joshi’s name had also emerged in the Samjhauta blast case, but before the police could reach him, he was murdered in Dewas, Madhya Pradesh, under mysterious circumstances in December 2007.

The NIA took over the case in 2011. Around the same time, it also took charge of the other three blasts in which the role of Hindutva organisations was suspected. All the investigative agencies concluded that the modus operandi in all four blasts were similar – cellphone triggered bombs, use of IEDs, etc. Several people who were investigated, the police alleged, came from Madhya Pradesh and operated from Indore.

The NIA named Aseemanand, a former RSS activist, as the kingpin of the Mecca Masjid blast and accused ten people in the case: Devender Gupta, Lokesh Sharma, Sandeep Dange and Ramachandra Kalsangra (both former RSS activists who are still absconding), Sunil Joshi (murdered in 2007), Aseemanand, Bharat Mohanlal Rateshwar (an employee in a private firm), Rajender Chowdhary (a farmer), Tejram Parmar and Amit Chouhan.

Out of the ten, five – Gupta, Sharma, Aseemanand, Rateshwar and Chowdhary – were arrested. Recently, in March 2017, Gupta and Joshi were held guilty and sentenced to life imprisonment by a NIA special court in the Ajmer Dargah blast case. However, both of them were acquitted in the Mecca Masjid ruling that came out today.

Aseemanand and Rateshwar were granted bail in 2017, while three others were put under judicial remand. It is being said that 226 witnesses and 411 documents were examined during the trial. Before the NIA took over, the CBI had examined 68 witnesses in the case, 54 of whom, including Defence Research and Development Organisation scientist Vadlamani Venkat Rao, turned hostile.

With witnesses turning hostile, it appears that the court could not find enough evidence to put the accused in the dock. Aseemanand was also acquitted in the Ajmer blast case. With him walking free without punishment in the Mecca Masjid case too, the role of the NIA under the Narendra Modi government is back under the scanner.

It may be recalled that Aseemanand had confessed to his crime both in front of the police and the media. In an interview to The Caravan, he had confessed to planning the bombings. Before the Caravan interview, Tehelka too had published a report about his 42-page confession statement, in which he talked in detail about various stages of organising and executing the blast. On December 18, 2010, he told the magistrate in the court, “I know I can be sentenced to the death penalty but I still want to make the confession.” He had also talked about the role of prominent RSS leaders like Indresh Kumar in mentoring those who eventually executed the blast.

This is what Tehelka reported:

“Indreshji met me at Shabri Dham (Aseemanand’s ashram in the Dangs district of Gujarat) sometime in 2005,” Aseemanand told the magistrate. “He was accompanied by many top RSS functionaries. He told me that exploding bombs was not my job and instead told me to focus on the tribal welfare work assigned to me by the RSS. He said he had deputed Sunil Joshi for this job (terror attacks) and he would extend Joshi whatever help was required.” Aseemanand further narrated how Indresh financed Joshi for his terror activities and provided him men to plant bombs. Aseemanand also confessed to his own role in the terror plots and how he had motivated a bunch of RSS pracharaks and other Hindu radicals to carry out terror strikes at Malegaon, Hyderabad and Ajmer.

Although Aseemanand retracted his statements later, his confessions at the initial stages of the investigation became important talking points. 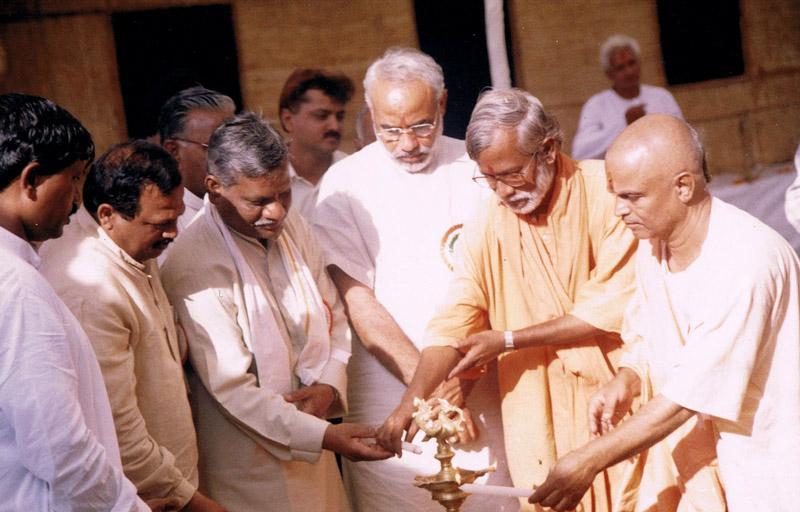 Undated file photo of Aseemanand, to the left of Narendra Modi, at the Swami’s ashram. Credit: Caravan magazine

Over the last few years, the NIA has received a lot of flak for going slow on cases that link Hindutva organisations to blasts. In an unprecedented government decision, Sharad Kumar, then NIA chief who was supposed to retire in October 2015, was given an extension to continue as the agency’s chief. Many former bureaucrats who spoke to The Wire then had said that the step was unconventional and feared that his apparent closeness to the BJP may have triggered the decision.

Kumar’s extension came in the backdrop of public prosecutor Rohini Salian’s sensational disclosure alleging that she was asked by an NIA official to “go soft” on Hindutva terror cases. Salian was the special prosecutor in the Malegaon blast case. In an interview to The Indian Express, she said, “He (the NIA officer) did not want to talk over the phone. He came and said to me that there is a message that I should go soft.”

The Wire had then reported:

Before the June 12 hearing of the case in the Mumbai sessions court, the same NIA official told her that ‘higher ups’ didn’t want her to appear for the matter, and that someone else would be appearing instead. “So the meaning very clearly was, don’t get us favourable orders. Unfavourable orders [were] invited — that goes against society,” she told the Indian Express in an interview.

Although the NIA denied her allegations almost immediately, Salian filed an affidavit in the court reiterating the same. She later named Suhas Warke, a superintendent of police in the NIA, who allegedly asked her to take a backseat in the case.

“There were sufficient grounds to challenge the bail order of Aseemanand and the High Court was at liberty to reject the agency’s move if there were no merits in the appeal. Among investigators, the opinion to appeal was very strong,” officials in Hyderabad, who spoke on condition of anonymity, were quoted as saying in the Indian Express. This indicated that the top officials gave clear orders asking them to not to pursue the matter further.

The exposé by the Indian Express came at a time when the NIA was facing flak for going soft on Hindutva terror cases. It had not challenged Aseemanand’s bail in the Samjhauta blast case too in 2014. Around the same time, it had exonerated Pragya Singh Thakur, Indresh Kumar and DRDO’s Venkat Rao Mahalkar in the Ajmer blast case. Venkat Rao, who was a witness in the Mecca Masjid case, later turned hostile.

Similarly, the top investigative agency was accused of sabotaging the Malegaon blast case. Writing for The Wire, advocate Sarim Naved explained how witness statements were lost in the middle of hearings and how the NIA also asked the court to drop the Maharashtra Control of Organised Crimes Act (MCOCA) charges against the accused. That an investigative agency, which was supposedly fighting to get the accused punished, was requesting the court to lighten the charges against the accused was a rare phenomenon. Even in the Mecca Masjid case, it was reported that many files, including Aseemanand’s statements, went missing from the court suddenly, because of which the hearings had to stop for a considerable time.

A year after the Modi government came to power, the Sunil Joshi murder case, one of the most important links between these blasts and one which the NIA fought for months to take over, was quietly shifted to Madhya Pradesh. The NIA said that it found no evidence of terror in the murder case. Now that Joshi has been convicted in the Ajmer blast, the position of the NIA is unclear.

In one of the most blatant U-turns, the NIA also tried to shift its position on the Samjhauta blast case and wanted to probe the “Pakistani hand” again. The former Haryana SIT chief, Vikash Narain Rai, who investigated the case, had told The Wire that there was clear evidence of involvement of Hindutva groups in the case and the SIT had found no evidence against Islamist terrorist groups, despite probing their role for months.

Three of the people the NIA had presented as kingpins in the cases are either out on bail or have been acquitted. Much of these court decisions have arguably resulted from the NIA’s softening stance against the accused. Pragya Thakur is out on bail, and so is Purohit.  Y.C. Modi, the current NIA chief, was once pulled up by the Gujarat high court for “ineptitude resulting into injustice” in the controversial murder case of former Gujarat home minister Haren Pandya. With someone like him at the helm, it looks improbable that the agency will pursue matters with greater firmness and grit in the near future.