'I Am Worried About our Future Generation, Do We Have to Fill our Graveyards?'

Bashir Ahmed Wani speaks about the journey of his son Mannan Wani from Kashmir's Lolab Valley to AMU and his return to the Valley to join the Hizbul Mujahideen.

Tikipora Lolab: On Thursday, Manan Wani, a PhD scholar-turned militant, was gunned down in a joint operation by the army and Jammu and Kashmir police.

The Wire spoke with Manan’s father, Bashir Ahmed Wani speaks about his son’s journey from Kashmir’s Lolab Valley to AMU and his return to the Valley to join the militancy. He also speaks of his son’s killing, how he was harassed by security forces and two articles Manan wrote earlier this year.

When did you learn that Manan had been killed?

At 6:30 am, I got a call but no confirmation. The police deceived me about what was happening. We tried to find out but in vain. Finally at 1.30pm they told us to receive the body from Chaogund area. They had brought him in an armoured vehicle and his body was handed over to our relatives who brought him back between 2.30 to 3 pm. It was me who controlled the law and order situation in the village in the meantime.

Did you know Manan was in the area?

As per police and intelligence reports, he was in the area. They had received inputs (about Manan’s presence).The mentally tortured me and were asking for my help to make him surrender.

What was your response to them?

I had already given them a message that he (Manan) had chosen his way himself. It is better for me to be silent.

Did your ever meet or speak with Manan after he joined the Hizbul Mujahideen?

Did he make a final call to you before or during the encounter?

No. Some journalists who talk to agencies had approached me to reach out to Manan but I had sent the SSP and other officers a message that I would not intervene. They even took me into custody for five hours during this period. Their aim was to harass. I told them that I couldn’t help them.

Manan was your youngest son.

Had he ever discussed his intention to join militancy?

He was an Islamic scholar. He showed me his angst when Afzal Guru was hanged. We had discussions after that and he was very aggressive. I felt a change in him. 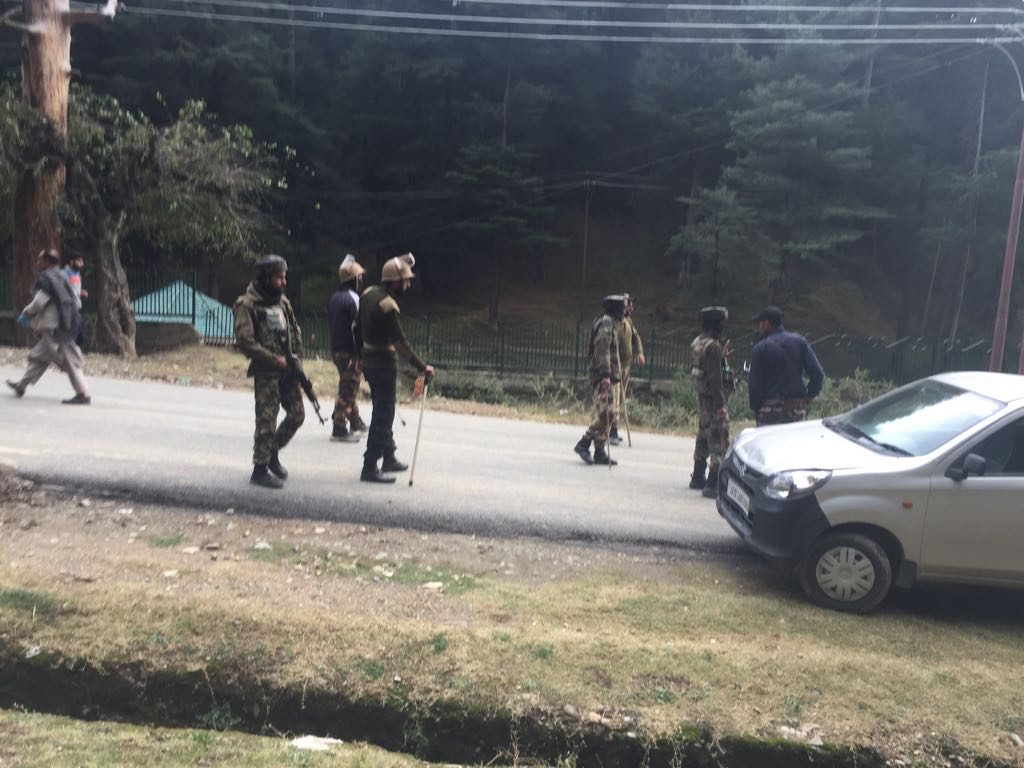 Security forces in the area. Credit: The Wire

Did you see his body after his death?

No, I couldn’t. He was shot dead and the police delayed telling us about what was happening. They didn’t make any official announcement.

Why do you think the police did that?

I don’t know. He had to go (die) eventually, I fail to see the point behind the confusion that was created.

How is your family coping with his death?

What can we do. I lost an asset. No matter how much we want nothing or no one can bring him back. it was Allah’s order, it is him who gives us pain and grief. All I can say is Innalahi-ma-sabereen (Indeed, God is with the patient). A Muslims has to be patient. I am just worried about our future generation, what will their future be like. Do we have to fill our graveyards?

Our leaders must think about this. The situation was so bad today that had I not controlled the crowds, I don’t think the funeral would have been possible today.It was so bad that for a moment I felt that we wouldn’t even get his body.

It was an emotional phenomenon. It was sheer madness. There were scenes I had never seen before.I fainted for multiple times. The funeral was made to be like a spectacle. People were carrying his body all around. We had planned to bury him at the martyrs graveyard but we had to bury him in another grave nearby.

Did you read articles written by Manan earlier this year?

I read it by the grace of Allah, but I can’t say that I completely understood them. But I got an idea of his ability.

I asked some laureates and linguists to make me understand completely what Mannan was trying to say and they responded that they didn’t understand. What was all this for. He issued just two statements and the government banned them. No doubt martyrdom is supreme, but I am disappointed I couldn’t understand him completely. He was an asset to our nation. Once I mentioned Shah Faisal to him as an example and he responded that there are people better than Shah Faisal, should I show them to you. He proved it by his articles that he was right.

Did he always wanted to study in Aligarh Muslim University?

Yes, always. He did his graduation from Amar Singh College in Srinagar and qualified in his examinations for a Master’s degree in Geology in University of Kashmir. He was ranked tenth. After that he told me he wouldn’t join the course in Kashmir. After that he gave an exam in Aligarh where he was ranked two. He did his masters and MPhil from AMU and this year he would have been awarded his doctorate. I met his friend recently and he told me that he is working as an assistant professor.

Manan was an angel, a glorious student and a mathematician. Three days ago when the army called me in, I took all his (Manan’s) medals with me and displayed them to the army with a broken heart. Manan was an icon. He was not a single man.