China's Intrusion in Ladakh Was Not Treachery But Surprise, And It Shouldn't Have Been One 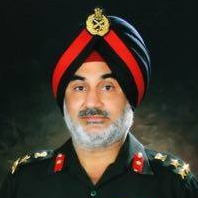 Although the government has been rather frugal in disseminating facts, it is clear from open source satellite imagery, statements by Indian officials and assessments by various defence experts that China’s People’s Liberation Army (PLA) has established a small presence across the Line of Actual Control (LAC) in Sub-Sector North (SSN), north-east Ladakh.

This occupation at Pangong Tso, Hot Springs, the Galwan Valley and the Depsang Plains – places long accepted as Indian territory for decades – did not happen overnight. Yet we were caught off-guard.

The Karakoram Range has two massive mountain spurs in this area. The western spur, Saltoro Ridge, separates Indian and Pakistani forces on the Siachen Glacier. To Saltoro’s east lies Sasser Ridge and SSN.

Access to SSN from Leh is through Chang La and the recently completed Durbuk-Shyok-Daulat Beg Oldie (DSDBO) road. The DSDBO passes from Durbuk along the Shyok river past the confluence of the Shyok and Galwan rivers up to Murgo and then the Depsang Plains, and ends at the Daulat Beg Oldie (DBO) airstrip, about 16 kms south of the Karakoram Pass, where the Chinese border begins. This is India’s only airstrip in this harsh, high altitude SSN. 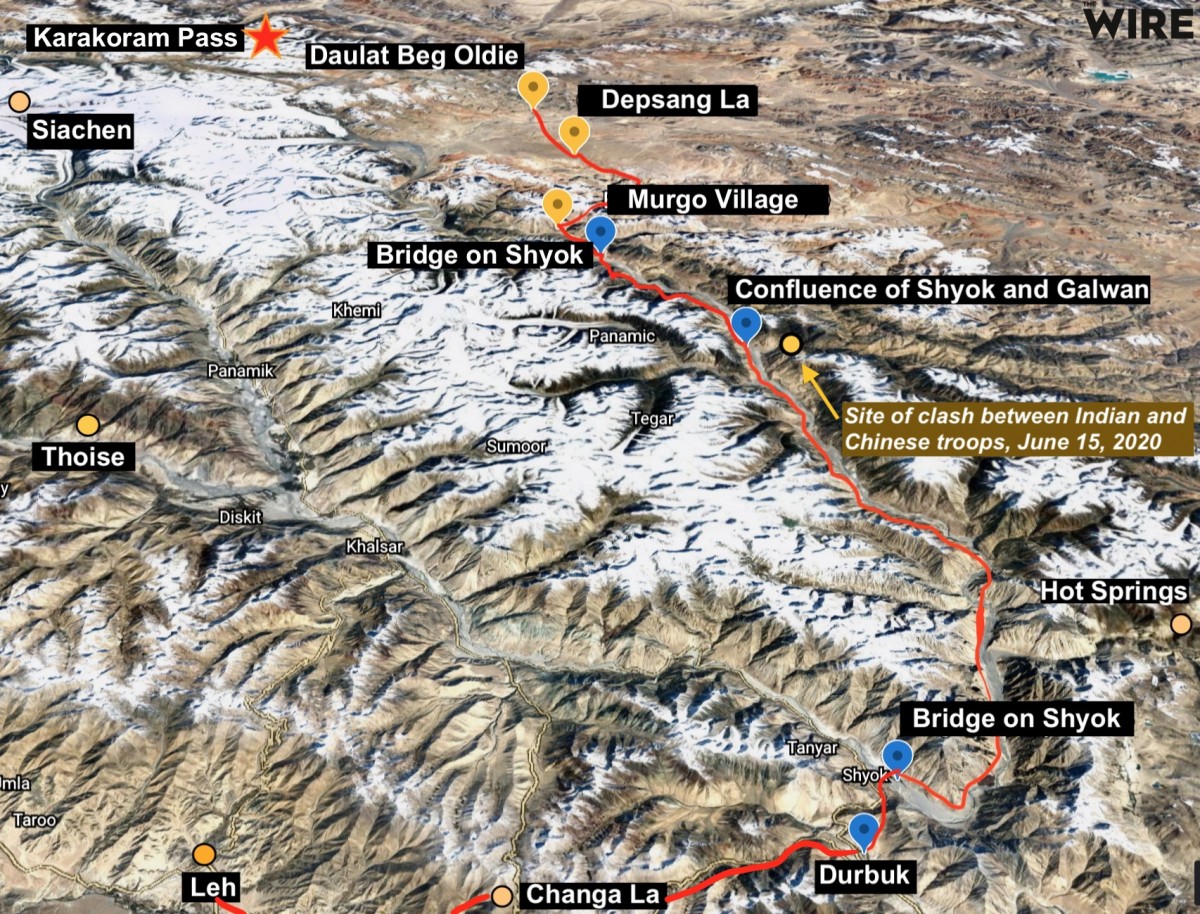 Sub-Sector North: Map of the road from Durbuk to Daulat Beg Oldie. The place where Indian and Chinese soldiers clashed on June 15, 2020 is around 5 kilometres east of the road. Image: The Wire/Google Earth

If the PLA succeeds in entrenching itself at various locations overlooking the strategic DSDBO road, it can potentially cut off Indian access in SSN and to DBO. It could also attempt a sustained but difficult offensive through intermediate passes to threaten our access to Siachen. Such an offensive, if successful, would enable Pakistan to improve its posture there.

The ceasefire line after the 1962 war was ratified as the LAC in the Sept 1993 bilateral agreement on “Maintaining of Peace and Tranquillity along the LAC in the India-China Border Areas”. This, the agreements of Nov 1996 and June 2005 suggest there were no major differences in perception of where the LAC lies. However, in the absence of precise delineation on the ground, patrols of both India and China have continued to operate in a grey zone, with the PLA routinely coming up to China’s perception of the LAC, and Indian troops going up to India’s perception.

On many occasions, both sides objected to the other’s patrol(s) and there were minor affrays too. What happened in May and June is unprecedented, yet there were many indicators that should have kept us vigilant.

After President Xi Jinping assumed power, China began pursuing an assertive foreign policy. From 2015, he thrust down a series of deep, comprehensive, doctrinal, structural and force modernisation reforms on the PLA. These reforms included converting the erstwhile seven military regions into five theatre commands. Opposite India, the former Chengdu and Lanzhou military regions were merged into the Western Command with substantial military resources at its disposal. China’s 2019 White Paper, a significant departure from the defence-oriented one published in 2015, emphasized that the country will “pursue national defence goals which include safeguarding national sovereignty, unity, territorial integrity…”.

In addition is Xi’s stress on combat readiness, particularly in high-altitude areas, and the increasing number of exercises by the PLA Army (PLAA), PLA Air Force (PLAAF) and the PLA Rocket Forces (PLARF) in the areas opposite India.

A January 2018 article in China’s Global Times on the PLA’s “hard training for potential conflict” quoted a retired PLA officer, “…potential military conflicts in plateau regions … on the rise since the border friction with India last year, increasing military training in the plateau region is highly necessary”.

In 2009, China built a road from Sumdo up to Patrol Point 13 in the Depsang Plains. This was followed by the 2011 and 2013 trans-LAC incursions by the PLA into Depsang, and subsequent face-offs with Indian forces. 2014 saw incursions into Chumar (eastern Ladakh) and 2017, a tense, protracted stand-off at Doklam (on the Indo-China-Bhutan border). Troops from both sides continued to jostle and brawl but without incurring serious casualties. Although the 2011 intrusion was resolved by the military leadership, all others – 2013, 2014 and 2017 – required higher political intervention.

Last autumn perhaps held enough hints of what was to come. India-China tensions had risen after India scrapped Article 370 (August 2019) – and September 2019 saw a serious brawl at Pangong Tso after the PLA began blocking Indian patrols; on both sides, soldiers were injured and boats damaged.

The PLA conducts an exercise every year in Aksai Chin and its immediate forward areas along the LAC. In January 2020, China’s state-run Global Times reported that the PLA had begun major military exercises in the Tibet Plateau bordering India with “latest weapons”. The exercise, which was not a surreptitious affair, continued – and after amassing troops astride the Galwan river, the PLA simply moved into SSN at four points around May 5. Importantly, it had, from 2015-2016, commenced building mud roads along the Galwan River – it flows west from Chinese’s side into Shyok River. The DSDBO road runs alongside this river for a considerable length.

Also Read: India Has Known About the Chinese Threat in Ladakh for Years. So Why Are We Unprepared?

In the June 6 military commanders meeting, the PLA reportedly declined to discuss its shallow ingress into the Galwan valley, stating that it belongs to China, a claim repeated by its foreign ministry. This was followed by the brutal brawl of June 15 in which 20 Indian soldiers were killed and about 76 injured; 50 of these injured and 10 others were briefly detained by the Chinese side.

Although the Indian Army and the Indian Air Force are matching the PLA deployment, the latter having pre-empted the Indian side is now entrenched at its new positions. Unlike the past incursions, the present stand-off, at multiple locations, seems pre-planned with political approval.

Given this background, India essentially has three options.

First, negotiate a voluntary Chinese withdrawal from these new occupations. With both China and India adopting extreme positions, a breakthrough can only be thrust down by the top political leadership, an eventuality which currently appears doubtful.

If that fails, the second option is to try and push back the PLA by force. This carries risks as China will contest Indian actions, which may lead to a wider confrontation. Given the ongoing pandemic and the state of our economy, even a short, sectorally-limited conflict would be disastrous. Besides, the international community is unlikely to support any escalation beyond a point. Significantly, PLA veterans are asking the Chinese leadership to be ready for ‘mid-sized war’ with India.

Third, India may allow China to retain, partly or wholly, the territory it has encroached into. Public statements by Indian leaders that the alignment of the LAC in unclear suggest this possibility.

While there are a number of issues that may have spurred China to this transgression, the underlying fact is that just as Pakistan surprised us at Kargil in 1999, China surprised India’s political and military establishments by occupying areas across the LAC in May.

Prior to the Kargil conflict, individual agencies had adequate intelligence inputs about the intrusion. However, these individual inputs were either ignored, or were not subjected to proper assembling, analysis and averment. The Kargil Review Committee (KRC) had correctly attributed this to “intelligence failure” and systemic flaws, and the associated Group of Ministers rendered ‘Recommendations’ across four domains to “Reform the National Security System”, i.e. the intelligence apparatus, internal security, border management and management of defence. But it does seem we were surprised again.

The Chinese media had been periodically commenting on the PLA’s exercises. So, it is implausible that external intelligence collection agencies like the RAW and NTRO did not provide any evidence of the massive movement by the PLA towards the LAC from end-April onwards.

Even sparse inputs should have prompted users to generate urgent intelligence requirements seeking further information. Hence, once again, it seems that inputs, plenty or scant, were not subjected to proper assembling, analysis and averment by various assessment agencies and users. Or perhaps, after decades of counter-terrorism operations, we have simply forgotten the principles of war – what we are labelling as ‘treachery’ is actually ‘surprise’ by the PLA, their “coming in large numbers” is ‘concentration of force’ – even as we didn’t exploit ‘intelligence’. Given that Pakistan and China are long standing adversaries and we have unsettled borders with them, we should have been on our best guard.

In response to the PLA’s annual exercises, the Indian Army too has been deploying troops to the LAC each year to thwart any misadventure. However, this year the Army didn’t move troops forward because of the COVID-19 pandemic. Further, the primary focus of the Indian Army has continued to be counter-terror operations and Pakistan. Both factors perhaps limited our ability to respond rapidly and forcefully as the crisis developed in the SSN.

Intelligence is a nation’s first line of defence and the intelligence structure is a critical constituent of its safety and security, as also of its statecraft and grand strategy. Thus, if India is to sit at the highest table in the comity of nations, then it must introspect on failures and put in place a robust, responsive intelligence structure to thwart external threats.

The high-altitude topography, extreme weather conditions and comparative paucity of infrastructure makes guarding SSN a difficult task. Given the defence budget squeeze, the end of which isn’t apparent, there is a dire need to rebalance India’s military power away from the weak adversary in the west and towards the LAC.

Kuldip Singh is a retired Brigadier from the Indian Army.