Seven civilians died and at least 25 were injured at an encounter site on Sunday. People clearing debris from the damaged house where militants were hiding during an encounter, at Kulgam district of South Kashmir, Sunday, October 21, 2018. Credit: PTI

Srinagar: A photojournalist said he saw a youth with his ribs protruding out being removed from the explosion site. Another scribe talked about a heavily-built person whose left hand was ripped apart by the blast. The third injured had deep wounds in his head and neck. All of them died within half-an-hour of the explosion. The tragedy didn’t end there.

By the time darkness enveloped the Valley, grief had filled the autumn air. The count of dead had risen to seven. Two of the injured, among 25, are battling for life in hospitals in the summer capital of Srinagar. All of them, the dead and the injured, were natives of Kulgam and had swarmed to a gun-battle site to douse the fire in a house where three rebels were killed by security forces in an early morning encounter on Sunday.

“It was a doomsday,” described freelance photojournalist Sameer Mushtaq. “There were people lying around on the ground, some unconscious, a few of them already dead and others writhing in pain.”

The horrific scenes of blood littered all around and people dragging out bodies from the site kept Mushtaq awake all night. “The images kept coming in front of my eyes. I haven’t seen such horrifying scenes anywhere,” he said.

The young journalist was part of a group of scribes who had rushed from Anantnag town to cover the gunfight in Laroo village of the southern district. The joint forces of army and J&K police had laid siege at around 4 am and the first contact between holed up militants and forces was established half-an-hour later.

Another photojournalist said the gunfight was over by 10 am, with the killings of three rebels, all locals, affiliated with Jaish-e-Mohammad. “Then the forces left the site and that is when we moved in to take pictures. The house was up in flames and many people, mostly young, were trying to douse the fire …suddenly there was a loud bang. We rushed towards the courtyard after a while and found at least seven persons down on the ground near the verandah. They were not making any movement,” said the photojournalist who works with a local newspaper.

“As we moved ahead there were more people lying flat on the ground, crying for help – blood on their faces, on their hands. A person had his two fingers hanging by skin,” said the scribe.

Several videos of the tragedy that have gone viral on social media show the injured and the dead being evacuated on motorbikes or carried on shoulders amid cries for help. Women can be seen beating their chest, plucking their hair as the injured are being rushed through alleys. “Oh God! Are we Kashmiris doomed to die like this,” a middle-aged women cries aloud in one of the video.

Another video of the funeral of Ubaid Shah, one of the deceased from Makenpora village in Kulgam has heart wrenching moments captured in it. As Shah is being taken for his last journey, a woman (pehaps his mother) pleads with him to “talk to me for one last time”. “Talk to me once. Speak a few words…look at me. Please talk to me,” she caresses his forehead.

The deaths have left the whole of Kashmir in mourning with no end in sight to decades of conflict which has taken a huge humanitarian toll.

In the corridors of Srinagar’s Shri Maharaja Hari Singh Hospital, desperate mothers and sisters waited anxiously to hear from doctors about the conditions of their loved ones injured in the explosion.

One of them was Daisy Jan whose son Auqib was preparing for Class X exams to be held later this month. Sixteen-year old Auqib was operated upon for three hours yesterday for severe injuries in his chest, abdomen and neck. “He promised me that he won’t leave his room…I don’t know how he got there,” Daisy said outside operation theater, tears in her eyes. A group of youth had rushed to her house to inform her that Auqib was critically injured and looking for her, at the blast site. She rushed to her son, barefooted. “He was in pool of blood. He could not utter a word.”

Another critically injured youth, who was removed to SKIMS hospital in Soura, had to be first shifted to another hospital to fix his “badly shattered” bones in legs. He continues to be in critical condition in SKIMS ICU.

As per data from hospitals a total of 25 persons were injured, some of them critically, in the explosion, and in forces action on protestors. Some of the injured have bullet and pellet injuries. 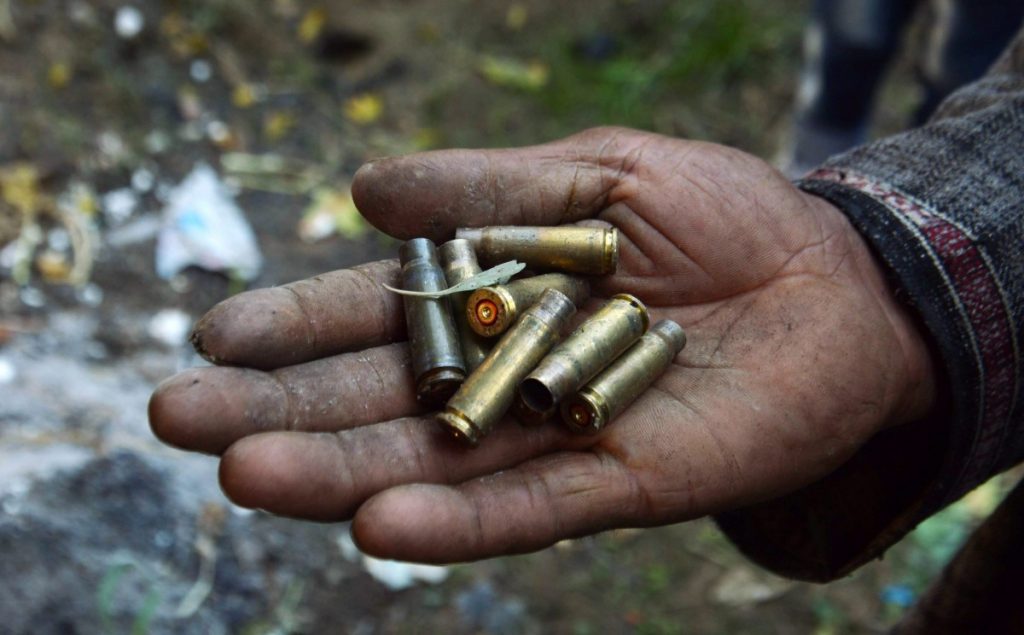 A youth shows empty bullets collected from debris of the damaged house where militants were hiding during an encounter, at Kulgam district of South Kashmir, Sunday, Oct 21, 2018. Credit: PTI

The killings have sparked fresh anger on the ground, with people observing a complete shutdown today on a call given by separatists, while two former chief ministers, Omar Abdullah and Mehbooba Mufti, warning that situation has become volatile.

“Alienating people in the fight against militancy is a sure fire recipe for losing the fight. How long can we go on ignoring the ground realities and and living in denial about how bad things are in Kashmir,” asked Omar Abdullah.

Was the SoP followed?

As per standard operation procedure the forces are required to sanitise the gunfight site before leaving it. But in case of Kulgam, as the forces hastily left after gun battle was over, hundreds of civilians from adjoining villages converged on the site.

“The house was on the fire and there was stone pelting going on. It was not possible to sanitise area in such a situation. But before moving out of the area and lifting the cordon we made the announcements asking people not to go near the gunfight site till it is cleared,” said a police official from Kulgam.

This isn’t however an isolated incident of killing owing to explosion of unexploded material at encounter-sites. In the past too, Kashmir has witnessed such deaths and injuries at encounter sites, which are not sanitised and cleared in time.

According to human rights groups, more than 100 people, mostly children, have been seriously injured in such explosions since 2000. Many of them died.

In January this year, nine-year-old Musharraf Fayaz of Chandigund died when a shell he had picked up from an encounter site exploded in his hands. In August 2015, two brothers, Bilal Ahmed Reshi and Shakir Ahmad, aged ten and 12, were killed after an unexploded shell they were fiddling with went off in Ganderbal district.

Locals rushing to encounter sites to try and help militants trapped in a house escape, or later help house owners salvage whatever is left in the rubble after gun battle is a common sight in the Valley.

In the past, J&K police have issued multiple advisories asking people not to go near the sites of gunfights. “Citizens are requested not to visit any encounter site until the site is sanitised by bomb disposal team. We seek cooperation of people in this regard for avoiding accidents of such nature,” reads a fresh advisory issued by the police after Kulgam mayhem.