Opposition parties have said the Centre's reluctance to declare the Kerala floods as national disaster betrays the government's political bias against the state. 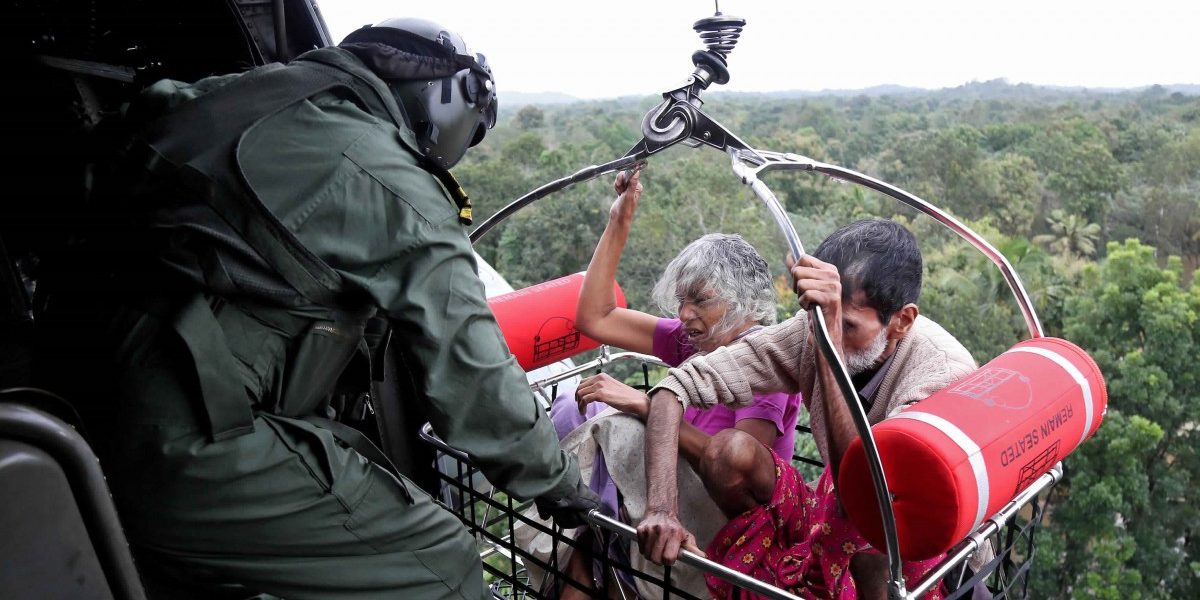 People are airlifted by the Indian Navy soldiers during a rescue operation at a flooded area in Kerala, August 17, 2018. Credit: Reuters

New Delhi: Even as Kerala stares at its worst-ever calamity, the Centre’s response has been far from adequate, those who know the extent of the damage say.

On Saturday, Prime Minister Narendra Modi, after a high-level meeting in Kochi conducted after his aerial survey of the rain-battered state, announced an additional assistance of Rs 500 crore to the state. He also announced an ex gratia payment of Rs 2,00,000 per person to the next kin of the deceased and Rs 50,000 to those seriously injured from the PM’s National Relief Fund (PMNRF).

The Centre had earlier announced a total of Rs 260 crore as relief for Kerala at different points of time since 14 August. Union home minister Rajnath Singh first announced that Rs 100 crore will be immediately disbursed to the state. Union minister of state for home affairs Kiren Rijiju then announced another Rs 100 crore as aid, followed by Rs 60 crore from a central high-level delegation which visited the state.

Of the total Rs 760 crore, however, Kerala has received only Rs 80 crore as of now, senior state government officials told The Wire. This, despite the state government already submitting a memorandum to the central government seeking Rs 1,220 crore as primary allocation. As the situation continues to worsen, many in Kerala feel that the political considerations of the Centre have overpowered humanitarian causes while allocating funds for flood relief. 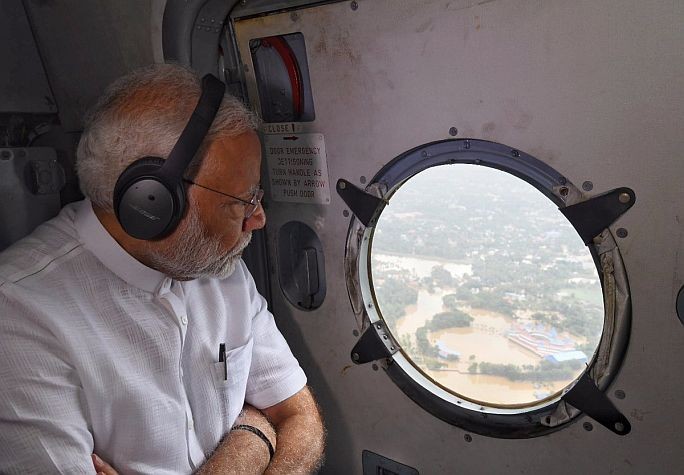 Senior journalist Rajeev Ramachandran said, “Last year, the state government had sought around Rs 7,000 crore from the Centre for relief work after cyclone Ockhi hit the Kerala coast. The Centre agreed to allocate only Rs 820 crore. And now, when the state is facing its worst-ever crisis, the Centre is overlooking the scale of the disaster.”

Similarly, senior journalist at The Hindu, K.A. Shaji, said, “He [Modi] came all the way from New Delhi using a chartered flight to announce a meagre Rs 500 crore as interim relief. And that too amidst high drama. Those who are engaged in rescue and rehabilitation works were forced to take breaks to ensure his safety and comfort during his brief stay and travel in the state. It would have been possible for him to announce the meagre relief from Delhi itself based on reports and requests placed already before him.”

T.K. Chintha, a public intellectual who works with the Kerala State Electricity Board, said, “The state is facing the worst tragedy in its history with almost 60% of the area under water and half of its population at risk. But the apathy and lack of empathy on the part of the Centre is unbelievable. The callousness with which the state is being treated has little parallel in the history of any country.”

Sree Chithran M.J, a prominent writer and IT professional who is one of the major coordinators of rescue missions, said it was disheartening that the PM had not acknowledged the floods as a national disaster during the visit. “We, the ground level rescue operators have been witnessing this natural calamity unfold during the past few days as it left thousands of people homeless with hundreds of casualties. It is certain that the fund released by the central government is negligible compared to the cost required for a complete state recovery,” he said.

Chithran said at least 2,000 relief camps were operating across the various parts of the state. “The fact that this amount is barely enough to even provide food for three continuous weeks to the hundreds of thousands of people in these camps, is undoubtedly the greatest injustice towards Kerala. This is indisputably a testimony to the blatant disregard by the Centre towards the state of Kerala and its people,” he said.

Meanwhile, the resentment in the state that the Centre has refused to declare the calamity as a ‘national disaster’ is gradually acquiring political colour in the national capital.

“The kind of havoc and destruction Kerala is witnessing is unprecedented in the last century. More than 350 people are already reported dead while thousands are stranded in the most vulnerable situation. It is unfortunate that the Centre has not been able to see the scale and magnitude of this disaster. I, on behalf of my party, would urge the prime minister to declare it as a national calamity urgently and commit itself to provide a higher scale of financial assistance that what has been done so far. The real test of the idea of cooperative federalism, which the prime minister espouses, is in the times of such human crises,” Manoj Kumar Jha, Rajya Sabha MP from the Rashtriya Janata Dal, told The Wire.

The Congress too upped its ante against the prime minister’s announcement. Randeep Surjewala, national spokesperson of the party, said after a meeting of top Congress leaders on Saturday, “Rahul Gandhi has demanded, the Congress party has demanded that Kerala flood be declared a national calamity and the government of India come forward to help the people of Kerala.”

3/3
Floods, human tragedy & unprecedented devastation can’t be subject matter of partisan politics as is being done by Modi Govt in #KeralaFlood

He added that the party would extend all help possible to the government of Kerala. “It was decided that all Congress governments will come forward to help the people of Kerala in this hour of tragedy… It was also decided by the Congress president and others in the meeting that all Congress MPs, MLAs, and MLCs across India will donate one month’s salary each (for the flood relief programmes).”

The opposition parties raising their pitch against the Modi government came amidst a widespread social media campaign which pointed out the stark contrast between the way BJP-ruled states and others have responded to the Kerala floods.

Yet another social media campaign has been raising questions about the Central government’s priorities.

The extent of the damage can be gauged from the fact that the state had an average rainfall of 352 mm, in contrast to the normal of 98.5 mm between 9 August and 15 August. According to the Kerala chief minister Pinarayi Vijayan’s initial assessment, the state has suffered a loss of Rs 19,512 crore. More than three lakh people have already been displaced. Hundreds of villages and towns have entirely submerged under water, and all 14 districts are on red alert. Access to electricity, healthcare and mobile phone networks continue to be patchy. More importantly, thousands are reported to have been stuck in their respective homes and relief camps, which too face the danger of flooding if the downpour continues.

Meanwhile, heavy rains have lashed several parts of the state this morning, causing concern that this could hamper rescue and relief operations. Chengannur in Pathnamthitta, Chalakudy in Thrissur and various parts of Ernakulam district are among the worst hit, where rescue efforts are likely to be concentrated today.

Kerala Finance Minister Thomas Issac told The Wire the situation is grave especially in Chengannur, with the chief minister confirming it in his late night briefing.

Since airlifting is the only option in some remote areas, where people are marooned for the past four days, the state government has sought more helicopters for airlifting them, the chief minister said.

Chengannur MLA Saji Cherian pleaded for more help, saying that thousands of people were stranded in their houses without food and water and that their lives would be in danger if immediate steps were not taken.

“For the past five days, people are without food in many places. We urgently need food, medicines, water. People need to be airlifted urgently. Evacuation by Army, Navy and Air Force are urgently needed,” Cherian told a television channel this morning.

Leader of the opposition in the assembly Ramesh Chennithala said government machinery must be properly coordinated to ensure all the needy get help.

As per information from the control room of the State Disaster Management, 194 persons have lost their lives since August 8 and 36 are missing. Over 3.14 lakh people have been moved to relief camps. Maximum deaths have been reported from Thrissur (42), Idukki (37) and Malappuram (35).

Note: The story has been updated with the latest donation figures from all states, including BJP-ruled ones.