Rouf Ahmad, the civilian killed in Srinagar city, was the sole breadwinner for his family. 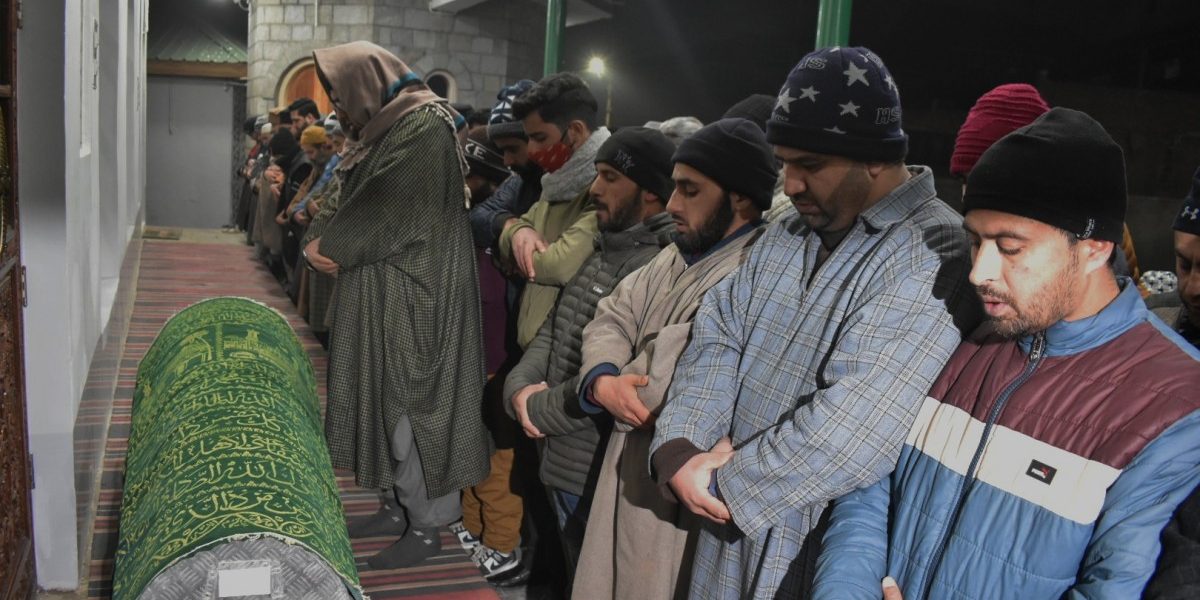 Funeral of slain civilian, Rouf Ahmad, who as per the police was killed in a militant attack in Nawa Kadal area of Srinagar city. Photo: Faizan Mir

Srinagar: Rouf Ahmad Khan, a property dealer, had left his house to buy biscuits for his five-year-old daughter on Wednesday, December 23, evening. As he walked along a vehicle parked on the roadside, suspected militants fired multiple bullets. Some of the bullets hit Rouf, injuring him fatally.

“When the firing stopped, I came out of my home to find him laying on the road in a pool of blood. He was probably dead and someone had put a shroud on his body. But no one touched him till the police arrived and took him to the hospital,” said Manzoor Ahmad, a neighbour, adding that the vehicle was also hit by bullets.

A senior J&K police officer said the incident took place at 5:15 pm in the congested Merjanpora locality of downtown Srinagar’s Safakadal. “Officers attending [to] the crime spot learnt that unidentified terrorists had fired upon …Rouf. He received grievous gunshot injuries in this terror incident and was immediately evacuated to [a] nearby hospital, where he succumbed to his injuries,” a J&K police statement said.

As news of Rouf’s tragic death spread across the city, a pall of gloom descended on the Merjanpora locality. Hundreds of men and women gathered at the family’s residence, comforting his inconsolable mother and wife, even as neighbours started preparations for the last rites.

“Why did you leave me alone in this world, Roufa?” Shazia, his wife, cried out in shock, as female relatives and neighbourhood women comforted her, “Who will take care of your daughter and mother? Please bury me in his grave. I don’t want to live any longer.” 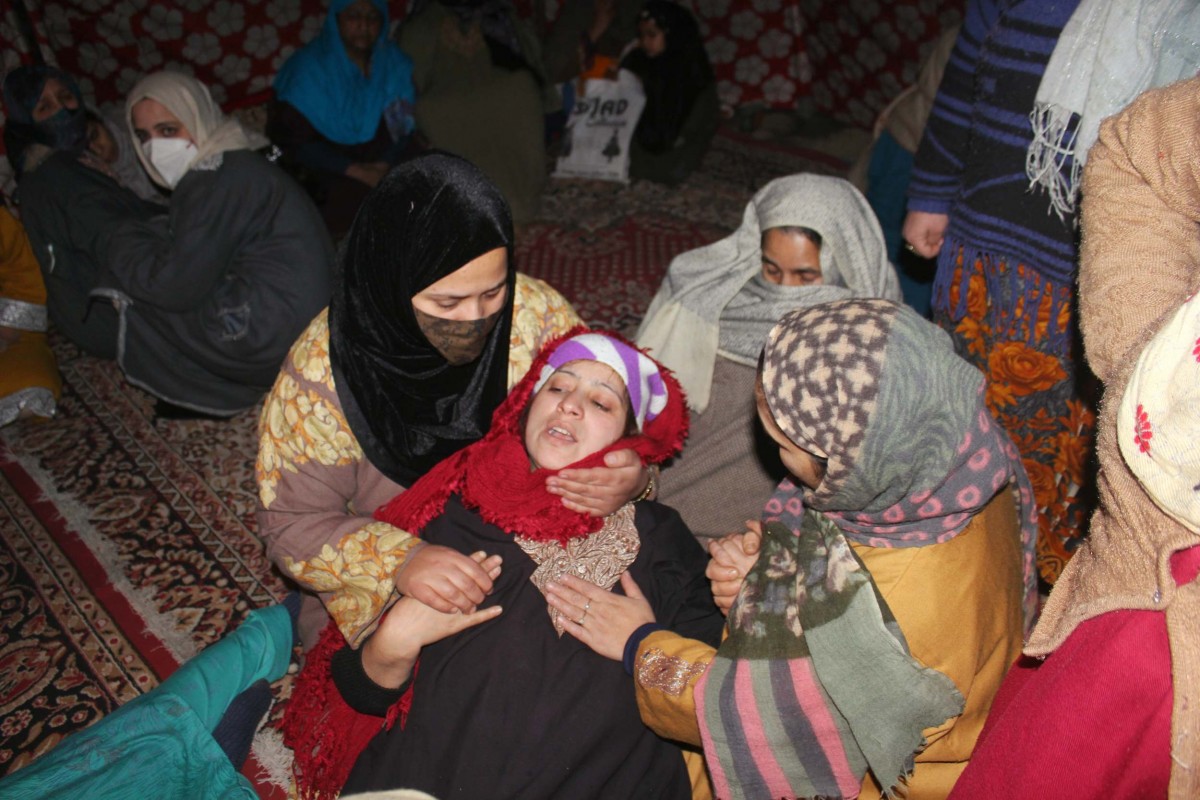 Rouf was the sole bread earner of his family. He is survived by his aged mother and a younger brother, Sajad Ahmad Khan, besides his wife and daughter. Rouf’s father passed away when he was young.

The attack took place days after Rakesh Balwal, a top cop of the National Investigation Agency who probed the deadly 2019 Pulwama suicide bombing, took charge of the police force in Srinagar city. The city has once again turned into a militancy hotbed, a year after it was declared free of militancy.

While Rouf’s family was waiting for the police to return his body, suspected militants struck again within 30 minutes, this time in south Kashmir’s Bijbehara town where Mohammad Ashraf, an assistant sub-inspector of the J&K Police was shot near a police station. “In this terror crime incident, he received gunshot injuries and was immediately shifted to hospital for the treatment of his injuries, however he succumbed to his injuries and attained martyrdom,” the police statement said.

“Investigation is in progress and officers continue to work to establish the full circumstances leading to these terror crimes. The respective areas have been cordoned and search in these areas is going on,” the statement added.

Also read: ‘We Are Fearing the Worst’: Families of Kashmiri Students Arrested After India-Pak Match

A wreath-laying ceremony was held at District Police Headquarters in South Kashmir’s Awantipora for the slain assistant sub-inspector, following which his body was handed over to the family for last rites.

Heart-wrenching scenes were witnessed in downtown Srinagar when Rouf’s body reached his residence on Wednesday night. His wife and mother tried to stop the mourners from taking him for the funeral bath, pleading for another glimpse of his face.

“Wake up Roufa, wake up,” his shocked wife Shazia screamed repeatedly, pulling and pushing her husband’s body as other women urged her to show patience.

At the graveyard, Sajad, Rouf’s younger brother, sat in complete silence besides the empty bier which contained his brother’s body. After the burial process was over and the graveyard had nearly emptied, Sajad lowered his gaze at the grave. A trickle of tears rolled down his cheeks. He turned to his few remaining relatives and asked them to return home, wishing to spend some time alone in the graveyard with his dead brother.

The twin attacks took place barely two days after a top Lashkar-e-Tayyabba commander from Pakistan’s Karachi city was shot dead in an encounter in Harwan locality on the outskirts of Srinagar, making him the third foreign militant to have been gunned down in Srinagar in a month. Police had linked the Lashkar commander to the recent civilian killings in Kashmir.

In October this year, which was the worst month for civilians in Kashmir since 2012, a spate of targeted attacks and the resultant precariousness in the security situation forced hundreds of migrant workers and Kashmiri Pandits to flee the Valley.

The number of civilian killings in Kashmir has risen steadily to reach a four-year high of at least 41 casualties this year, including political workers, who were allegedly killed by militants. The figures for 2018, 2019 and 2020 are 39, 39 and 37 civilian killings respectively, according to the official data shared recently by the Union government in the parliament. Two civilians were also killed by the CRPF.

The data also shows that around three dozen security personnel have been killed by militants in J&K, with a majority of killings reported from the Kashmir Valley. This includes at least 19 J&K Police personnel, many of whom were targeted by militants when they were off duty. 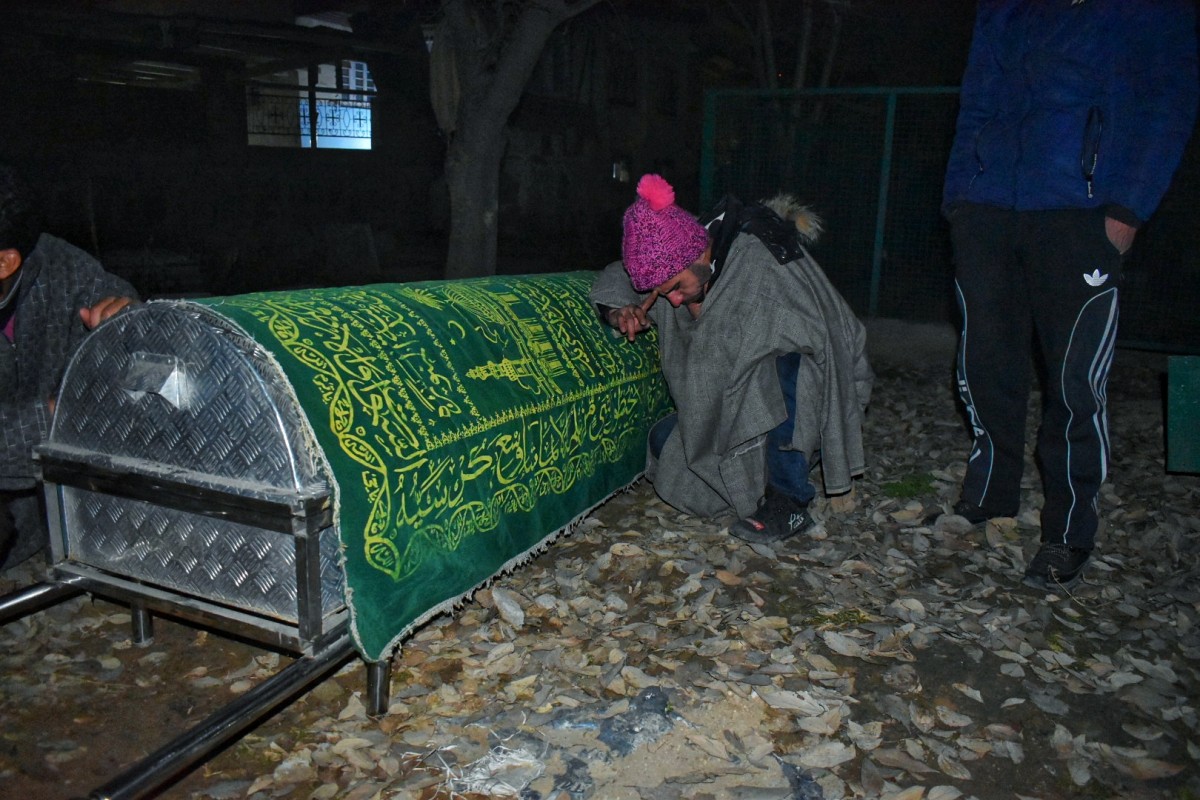 Security agencies have linked the sudden spike in the attacks on civilians and security personnel to the change of tactics by militants who are lately seen using small firearms, instead of large automatic rifles, to attack their targets.

Earlier, a PTI report had said that “nearly all the terrorists involved in the killings of civilians” in October have been gunned down by security forces. “…armed forces are now focusing on intelligence-based ‘surgical operations’ involving smaller teams to deal with terror activities in the union territory,” the report said.

Meanwhile, J&K Lieutenant Governor Manoj Sinha condemned the attacks in a series of tweets. “Deeply saddened by the barbaric and cowardly terrorist act in Srinagar and Anantnag. I strongly condemn this heinous attack on civilian Rouf Ahmad & JKP officer Mohd Ashraf. The terrorists and their handlers responsible for these killings will be brought to justice soon,” his office tweeted.

“Such barbaric terror act will not succeed in undermining J&K’s development journey. Deepest & heartfelt condolences to bereaved families. Govt stands with the families & friends at this difficult time,” Sinha said in another tweet.

The National Conference also condemned the twin killings. “Unequivocally condemn the militant attacks on ASI Muhammad Ashraf in Bijbehara and civilian Rouf Ahmad Khan in Eidgah in which both lost their lives. Our hearts go out to their families, friends and colleagues. May Allah grant them a place in Jannat,” the party tweeted.