In Srinagar, residents contemplate the Valley becoming a war-zone between India and Pakistan. In villages near the Line of Control, they prepare to pack their bags.

Srinagar: From early on Tuesday morning, people in Kashmir have been anxiously glued to their TV sets. News reports poured in of a pre-dawn airstrike across the Line of Control (LoC), India’s response to a lethal car-bomb attack at Lethpora, Pulwama.

The news evoked mixed reactions: relief that the theatre of violence had shifted away from the Kashmir Valley – at least for now – but also apprehension that Pakistan’s retaliation would turn the Valley into a war-zone.

In the twelve days since the Pulwama attack, Kashmir has experienced a number of unusual and panic-inducing developments – from a rising number of troops, including an additional 10,000 CRPF men, to all J&K hospitals being put on alert. Members of the J&K police band were even asked to prepare for deployment.

The Jaish-e-Mohammad (JeM) “hit Indian forces & claimed the attack. In turn Indian forces hit JeM & owned that air strike. It is now time for cooler heads to prevail. War is never an ideal option to resolve disputes….” tweeted former chief minister Omar Abdullah. He echoed the views of people on the streets, who are desperate for the war hysteria to end.

A day full of anxiety

Mohammad Saquib, a student who followed the news for entire day, compared the “surgical strikes” of September 2016 to today’s airstrike. “Back then there was euphoria created by the media, after the Uri attack. Then India responded with what it called surgical strike. It de-escalated the situation,” he said. “What happened today seems to be on the same lines. Let’s hope situation changes for the better.”

At the summer capital of Srinagar, the news of the attack and the developments that followed dominated conversations. Shoaib Ahmad, a student at Kashmir university, was sitting with his friends on the Bund behind Lal Chowk.

“We hope the worst is over now,” he said. He hoped that Kashmiris would be “spared now”.

But Ahmad’s friend Junaid Hamid was cautious, remembering Pakistan foreign minister Shah Mehmood Qureshi’s statement that the country reserves the right to retaliate. “Any response in haste by Pakistan can turn the situation into a nuclear confrontation,” Hamid observed.

‘Time to pack bags and leave’

Hundreds of miles from Srinagar, the thunder of jets flying for “long hours during night” had kept Mohammad Din awake, like most residents of Churanda – the last village on the Line of Control from Indian Kashmir.

When the news of the strike lit up on his mobile on Tuesday, his anxiety began to grow. “It is time to pack bags and leave,” he said to his wife, who was in the kitchen. The family decided to wait and watch for a day or two before taking a call on moving to a safer location.

Like Din, residents of dozens of villages along the LoC fear the situation growing worse in the days ahead. “There is panic in border villages like Churanda, Silkote, Chanderkote, Balakote and Nambla,” Parvaiz Ahmad, a sarpanch of Churanda, a hamlet of around 250 households, told The Wire. “People are preparing to migrate before a war breaks out between India and Pakistan. The situation is very tense.”

Anytime the situation between India and Pakistan escalates, hundreds of families from these villages are forced to migrate to Uri, the nearest town, located out of range of the guns across the LoC. 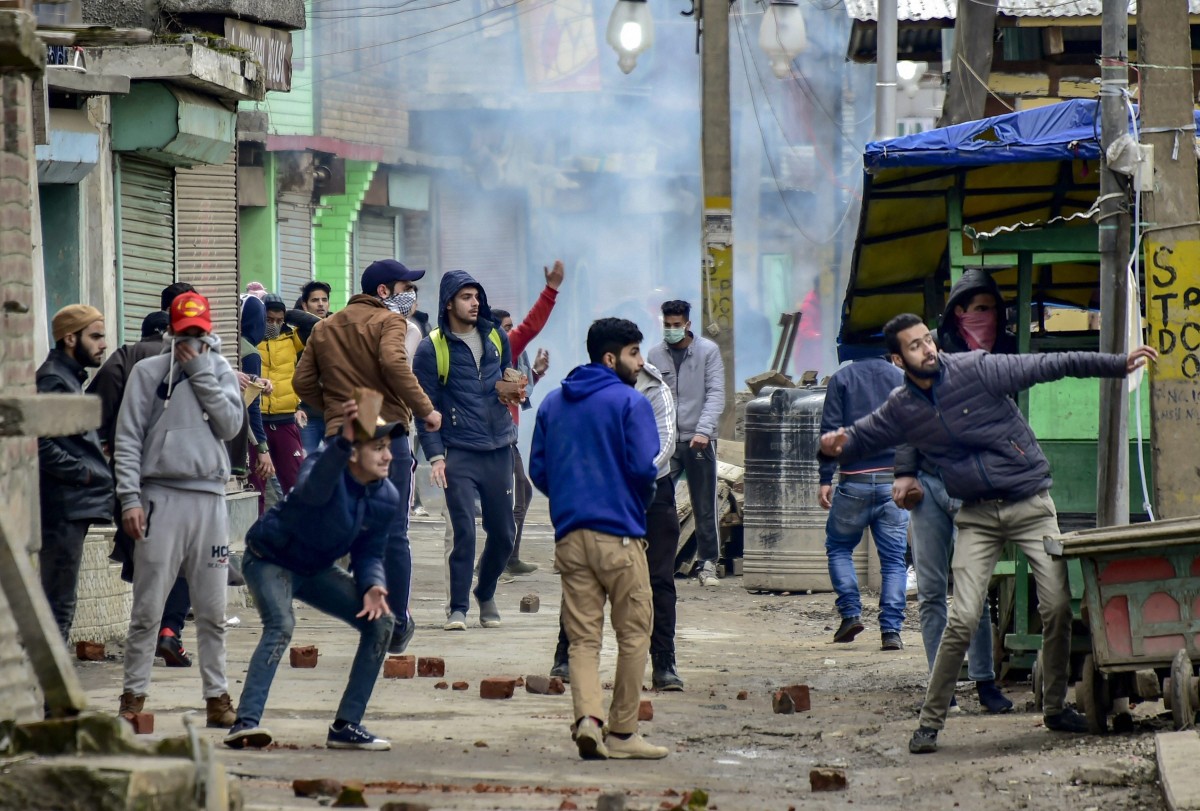 Protests in Srinagar against the NIA raids on separatists. Credit: PTI

For some, ‘business as usual’

Amid the escalating tension, cross-LoC trade continued unhindered and dozens of trucks laden with goods crossing the de-facto border.

At least seventy trucks crossed the LoC in Uri, said an official of the state industries and commerce department, which oversees trade between the two sides of Kashmir. “It was business as usual,” he said.

Hilal Ahmad Turki, president of the Cross-LoC Traders Union at Baramulla, said that at least 35 laden trucks crossed LoC from Indian Kashmir to Chakothi, on the Pakistan-occupied side, on Tuesday afternoon.

The cross-LoC bus service between Srinagar and Muzaffarabad, which had been  suspended after Lethpora attack, was also resumed on Monday.

While the public was preoccupied with the possible fallout of the air strikes, sleuths of the National Investigation Agency (NIA), accompanied by J&K police, raided the home of separatist leaders, including Mirwaiz Umar Farooq and Muhammad Yasin Malik, who has been under police custody from last week.

Since the Pulwama attack, more than 300 Jama’at-I-Islami members and workers, including the group’s chief and other separatists have been arrested by J&K police.

Reports in the local media said the agency also raided the residence of Shabir Shah – who has been in Tihar Jail since 2017 for his alleged role in funding militants – and Syed Naseem Geelani, the son of senior separatist Syed Ali Shah Geelani. Others raided include Muhammad Ashraf Sehrai, a close aide of Geelani, Zaffar Akbar Bhat and Masarat Alam Bhat.

The raids provoked protests in areas of Srinagar, including Maisuma where Malik resides. Dozens of young men pelted stones at security forces. Later that day, the Joint Resistance Leadership (JRL) called for a two-day shutdown in Kashmir, beginning Wednesday, to protest the NIA raids and the Centre’s legal challenge to Article 35A.