I Witnessed the Kargil War. That's Why I Won't Celebrate It.

A war correspondent writes about why he hates war. 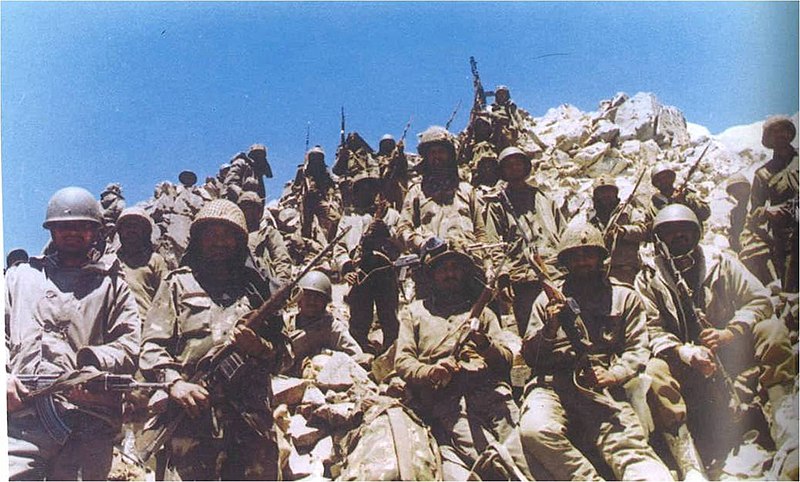 Indian soldiers in Batalik during the Kargil War. Photo: PMO

Like marbles on a slope, first the black pebbles roll down. They are followed by black rock and scree on the brown incline. The little rumble is muffled by the thump-thump of shells burying into soft cliffs behind.

The first of the casualties is about to be here, the stumbling stretcher-bearers have kicked off a small avalanche to warn of their imminence. The first of the stretcher-bearers, indeed the first casualty, is being brought down from Tiger Hill Top. Even as the bearers lay the stretcher on the hillside, a helicopter chops the air and the grass and flowers with its rotors, and touches down in front of this grey stoned primary school building by a rivulet. The bank of the rivulet is a school playground that is now the makeshift helipad for casevacs (casualty evacuations).

The patient is bundled into the small Cheetah helicopter, a derivative of the French-origin Alouette, and off she goes.

The casualty in tattered fatigues has a white cone of solid bone jutting from a red tear around where his left shoulder should have been. The cloth is drenched, the fatigues are dripping red, the bearers have bloodied hands and smears on their faces.

Then one of the stretch-bearers who is sprawled on the earth from exhaustion but remembers me speaking to his officer in the grey-stoned school gestures.

He holds out his helmet.

In recalling the battle for Tiger Hill, on the 20th anniversary of the Kargil ‘war’, it should be noted that in those weeks this skirmish climaxed a 50-day event. Officially, the hostilities in Kargil in 1999 are still not recognised as a ‘war’. It is important however to draw lessons from collective experience. It is time to put paid to hype about a ‘fearless’ series of heroic stories and the gooey nonsense about ‘guns and coloured flowers’ surrounding what was essentially a ‘limited’ conflict and is even now not recognised as a full-fledged war.

There is nothing romantic while in a war. War is dirty, bloody, grimy, sweaty, urinary, shitty and bare-boned. All of it literally and at once.

Its stench lingers in the nostrils and in the mind for years. I am a war correspondent – I went on to cover Iraq and Afghanistan after Kargil – but I hate war.

The 20th anniversary of the Kargil War – the first cable-TV armed conflict, as it were – is celebrating all of that what is abominable.

We, people, I believe, are born at least to be humane. War is nowhere near human; it is alien to our nature. In the normal course of things, with disagreements to live by, we don’t slit one another’s throats and behead each other with khukris. We need to be possessed by an evilness to do so. Bloody battles like in Kargil inject that evilness.

The scene I have reported above, where a stretch-bearer showed his bullet-ridden helmet when the bone was sticking out of a soldier, was just outside Holiyal village in Mushkoh Valley at the base of Tiger Hill. The grey-stoned shelter was a desolate primary school tenement. It was chosen as an action station for the main unit that took Tiger Hill because it was not visible to the Pakistani gunners. The Pakistani shells flew over it and bored into a hill behind it.

In July 1999, I could not report to the newspaper I was then working for the names and the places of the incident because the officer who had hosted me was in the thick of battle. He was leading the 18 Grenadiers, I can report today. The ‘action station’ was the school in Holiyal village in Mushkoh Valley, where I had bara-khana – the ‘grand feast’ – the afternoon before the evening the soldiers set off to re-capture Tiger Hill.

Colonel Khushal Thakur, commanding officer of the 18 Grenadiers, later Brigadier, now retired, then told me (my newspaper) over an RT (radio transmitter) “we have reached Tiger Top, we are wrapping it up” the next day (July 4). Tiger Top was at around 15,000 feet. I was at about 13,000 feet. Col Thakur I guess at around 14,000 feet.

I met him quite by chance on one of many forays from Kargil to Drass (about 65 km though hairpin bends within sight of Pakistani gunners) and beyond to Mushkoh, like many reporters, looking for a story to dispatch. Most journalists, certainly the ones loaded with heavy cameras (TV), had made Drass their base. Mushkoh was beyond Drass. I was armed only with pens, notebooks and a satellite phone.

The editors of my Calcutta-headquartered newspaper then had given a week’s notice to get primed for the assignment. It is easier to get physically fit when one is 20 years younger.

Also, because I could sketch a bit and had had a record of meeting deadlines, the editors said there must be copy with graphics every evening. They armed me with a satellite phone that was to be shared with a colleague from a sister newspaper of the ABP Group. On more than one occasion, though, the immediate editor was too concerned for our well-being.

Telecom and the internet then was not what it is like today. Stories had to be sent in bursts like staccato. For a reporter, the sorriest situation is to have a story but one that cannot be despatched. The satphone was a blessing.

It so happened that the satphone networks were available only outdoors and that too for about 90 seconds per call within which we had to dictate copy. So D-Da, the editor I was reporting to daily, feared so much for my safety because of the ambient boom of the shelling that he often said, “Get into the shelter, forget copy, we’ll take agency.”

But what’s the point of being in the middle of a war if you cannot write about it?

Also read: Why Is India Still Ignoring Lessons Learnt From the Kargil War?

In the drives to Holiyal from Kargil (at a height of 90,00 feet), we went through Drass. It is 65 km from Kargil to Drass. The Mahindra Commander 4X4 I had hired from Leh was shared by Rajesh Ramachandran and Manish Swarup who were then with Hindustan Times, and Suman Chatterjee from the Bengali daily the Ananda Bazar Patrika. I was with the Telegraph.

On the night of July 3-4 when heavy artillery and Grad multi-barelled rockets fired from Drass while we were returning from Holiyal, Manish stepped out to capture pictures. The rockets were cutting through the night sky like a fast-bowler’s outswingers across the Himalayas, lighting the snow on the peaks in glows of amber. The Bofors 155mm guns were pounding in “direct firing mode” without an aerial observer. The hills above us were trembling. The ground beneath my feet quaked and quaked.

Manish was to be back in a couple of minutes because we were to move to Pandrass on higher ground, behind a hill from where we would get a ‘panoramic’ view of the events. When he did not, Rajesh went out to look for him. Rajesh was injured by shrapnel as he was trying to get into a bunker in Drass (56) brigade headquarters. We learnt the next day that he had been evacuated to Srinagar and then on to Delhi.

By this time we were east of Tiger Hill, west of Tololing. The war began turning for India from Tololing. Drass, which was known as the second coldest place on earth (after Verkhoyansk in Siberia) despite being on flat land, was directly below Tololing.

Between Tololing and Tiger Hill is Sando Nullah, through which, unknown to us then, a Gorkha battalion was one of a three-pronged attack, at the centre of which was the 18 Grenadiers.

The second-in-command of the 18 Grenadiers, Lt Colonel Viswanathan – a friend Colonel Khushal Thakur’s ‘2-IC’ – had fallen in Tololing on June 23. When I met them in Holiyal, his place was taken by Lt Col Paugham (I don’t know his current whereabouts) with Major Rajeev Kumar holding the base and the radio in the “action station”, the school in Holiyal over which Pakistani shells whistled.

Paugham had drawn a sketch in my notebook at the bara-khana to explain how the plan included an excursion through the exotically named “Pariyon ki Jheel (Lake of Fairies)” to the North West of Tiger Hill.

That was also part of a plan to recapture a strategic height – Point 5353 – that India was unable to regain and even today continues to be in Pakistani possession. It probably has the best view of National Highway 1A that the Kargil incursion of 1999 by the “intruders” was aiming to interdict.

Let alone wars, even battles and skirmishes often are not conclusive. Kargil is one of a series. It has a history and a future.

The Kargil-Drass-Leh sector was targeted by Pakistan and Pakistan-backed forces in 1947-48 when India could not retain Skardu, then again in in 1965 and in 1971 when India captured and till today holds on to Turtuk near the Siachen south glacier.

With such histories that portend grim and bloody futures, the value of celebrating futile heroism – when bullets through helmets define luck – is questionable.

Sujan Dutta covered the Kargil War for the Telegraph.