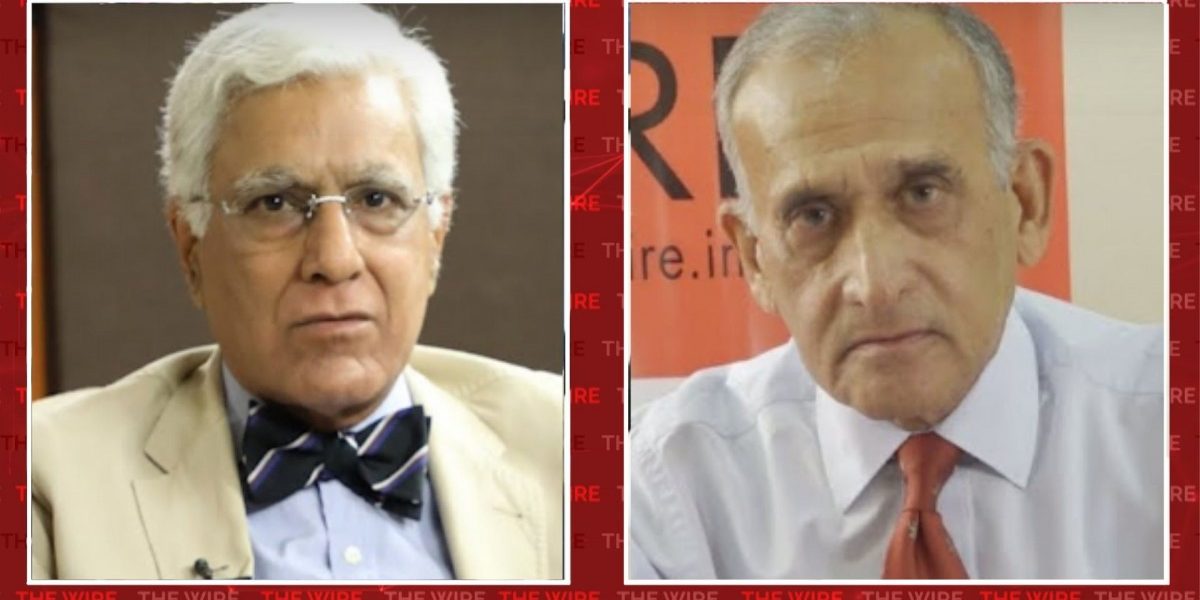 In the first interview by a former service chief after the COVID-19 crisis and lockdown began, former Navy Chief Admiral Arun Prakash spoke out boldly on many pressing issues during his discussion with Karan Thapar for The Wire.

In a 25-minute interview, he has answered questions about whether last Sunday’s flypasts and petal-showering were the best way of honouring ‘coronavirus warriors’, about the Chief of Defence Staff’s press conference, about comments made by the GOC-in-C 15th Corps and DGP Jammu and Kashmir that Pakistan is pushing COVID-19 infected people into India and, most importantly, on how the armed services and Navy, in particular, must respond to the financial crisis facing India which is likely to lead to drastic cuts in the military’s capital expenditure budgets.

Admiral Prakash also says India cannot afford enemies on two fronts and must follow Chanakya’s advice and make peace on one front. He says China is India’s main adversary and it would make sense to come to terms with China.

Admiral Prakash said “there is much more the armed forces could have done” beyond flypasts and showering petals, in particular to help migrants.

Also read: The Indian Armed Forces and Petals: Yet Another Entertainer for the Indian Public?

He said the armed forces have “deep resources and organisation and all that is needed is for the govt to call on them.” Asked if the government should have called them out he said: “Yes, I think they should have been used, particularly when the citizens of India are in distress. The armed forces have tremendous resources, they have the organisation and can jump in blind folded and render instant succour”.

He admitted the government has to balance between the COVID-19 risk soldiers would face and the need to help hundreds of thousands of citizens but added “it was worth doing”.

Asked if the announcement about flypasts and showering petals should have been made at a press conference by the Chief of Defence Staff and the three service chiefs, Admiral Prakash said:

“I don’t think the occasion called for the three chiefs and the CDS to come and announce issues which are not of great significance.”

He said when news broke that a press conference was going to happen “there was a lot of speculation” but it turned out to be “an anti-climax”. He said the announcement about the flypasts and showering of petals “could have been done otherwise”.

Asked about an interview given by the Head of 15th Corps, Lt Gen. Raju, to the BBC on April 15 and another by the DGP of Jammu and Kashmir, Dilbagh Singh, to PTI on April 22, when both said they believed Pakistan was pushing COVID-19 infected people into India, Admiral Prakash said:

“It seems a little far fetched”.

“…if a man has coronavirus he’s not fit to climb high mountain passes…on the face of it it seems unlikely this kind of biological warfare would be launched by the other side”.

“Perhaps they were thinking of something else when they made these statements…perhaps a little more thought should have gone before making a statement of this nature…we need to be a little more careful about making statements that can be misinterpreted.”

In the second half of the interview (after the commercial break) Admiral Prakash was questioned about the impact cuts in the military budget will have on the three services. He said there was a need to shrink their size.

“Our armed forces are too man power intensive. It’s time to switch from manpower to technology. This is the time for defence reforms”.

Asked how difficult it would be to shrink the services, Admiral Prakash said:

“You have to be innovative and imaginative to make sure whatever budget is available you can counter all threats within that budget…we have to think harder.”

Citing the example of UK, he said:

Speaking specifically about the Navy, Admiral Prakash told The Wire that financial cuts “will send the Navy’s plans for a six”. He said, “If plan A will not work out the Navy will have to make do with plan B or C”.

“The Navy and all the armed forces will have to cut their coat according to the means available.”

He further said the military “can’t behave like spoiled children and insist on what the govt promised at one point of time.”

On China’s increased role in the Indian Ocean, Admiral Prakash said the Navy has to “evolve a new strategy of how to counter the Chinese…we can’t be orthodox and hidebound.” He said countering China’s growing presence in the Indian Ocean is now “a far more challenging issue…the Chinese are on the up and they are going to appear here in strength”.

“We just cannot handle two fronts…if you have two enemies make peace with one. We need to think about that very carefully. It’s time to think like Chanakya and make peace on one front.”

“Pakistan is only a puppet of China. China is the main adversary and it would make sense to come to terms with China”.

On how that should be done, Admiral Prakash said:

“Sticking to entrenched positions is not getting us anywhere. We need to do fresh thinking”.

The above is an accurate account of Admiral Prakash’s interview to The Wire but not a full one. There is a lot more in the interview. Watch it by clicking ‘play’ below: