Kashmir-based regional parties have criticised the move, saying it belies the claims that normalcy has returned to Jammu and Kashmir. 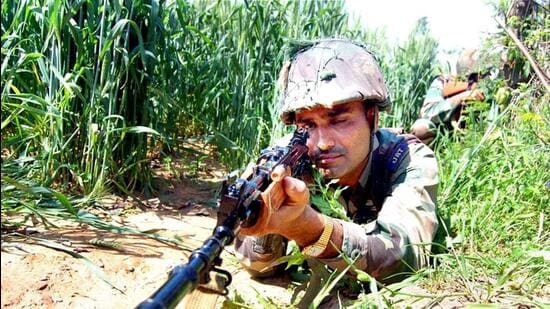 Srinagar: A state-backed civil militia, whose members have been charged by the Jammu and Kashmir Police for gross human rights abuses, including rape and murder, is set to be revived by the Union government in Jammu and Kashmir.

Kashmir-based regional parties have criticised the move, saying it belies the claims that normalcy has returned to Jammu and Kashmir. The announcement has also triggered widespread concerns that the “extraconstitutional armed entities” will enable a “new regime of abuses” while widening the gulf between Hindus and Muslims.

National Conference member of parliament and former J&K high court judge Hasnain Masoodi said the revival of the militia is an “admission that things are not normal (in J&K) as they are being projected (by the BJP-led Union government)”.

“These actors are beyond the purview of law. By falling back on an extraconstitutional body which is not in the legal framework, the government is conveying that the police and other security forces are not doing their job properly,” Masoodi said.

Veteran Communist party leader M.Y. Tarigami said the announcement comes at a time when the Union government has spoken about holding elections in Jammu and Kashmir in the near future. “These groups are involved in gross violations of human rights. Other than putting pressure on ordinary people, I don’t see any reason for reviving them,” he told The Wire.

Former J&K chief minister and People’s Democratic Party president Mehbooba Mufti tweeted: “MHAs move to form Village Defence Committees across J&K is another addition to a slew of decisions that contradict GOIs much touted normalcy claims. Clearly J&K is far from any semblance of normalcy. It will also create a wedge between communities.”

The members of the civil militia branded ‘Village Defence Groups’ (VDG) have faced accusations of using their arms to settle personal scores with the Muslim population of Jammu in the name of fighting militancy, resulting in gross human rights abuses which have been documented by various rights advocacy groups, including the J&K Coalition of Civil Society, a prominent Srinagar-based advocacy group.

According to official data, 221 criminal cases have been filed against VDG members in Jammu, including 23 cases of murder and seven cases of rape, 15 cases of rioting, three anti-drug cases and 169 other cases, out of which charges have been filed in 205 cases.

Masoodi, the National Conference MP, continued: “The experience with these groups has not been good in J&K. There are documented cases of excesses and trespassing of authority by the members of these groups. It’s a matter of concern that the government is reviving them.”

Also read: How Modi Govt’s Policies in 2021 Inflamed Rather Than Diffused Conflict in Kashmir

Official sources said the home department of J&K had proposed to the Union home ministry last year in January that a scheme under which hundreds of VDGs were set up in the Jammu region in 1995 to “assist” the security forces in combating militancy operations could be revamped.

The J&K administration pushed the proposal amid fears that Pakistan was attempting to revive militancy which has, in recent years, reared its ugly head in Jammu region also, particularly Chenab and Pir Panjal areas, leading to the killings of political activists and security forces.

In a letter to J&K chief secretary Dr Arun K. Mehta on Wednesday, March 2, the home ministry, while approving the proposal, listed out several measures for reconstitution of the defence groups whose members will now be designated as Village Defence Guards (VDG). According to the home ministry, the new scheme will become operational after the approval of the J&K high court.

The idea of a civil militia was first mooted in J&K when India and Pakistan went to war, first in 1965 and again in 1971. During the two wars, official data reveals that the J&K Police handed out more than 2500 rifles (.303) to the volunteers in border districts of Jammu to “supplement” the efforts of security forces.

In 1993, the massacre of 13 Hindus in Kishtwar turned into a trigger for the recruitment of former security personnel in civil militias in J&K. As militancy spread across Jammu, the idea of civil militia was formalised by the home ministry in 1995 to stop the ‘second migration’ in J&K. After the exodus of Kashmiri Pandits from the Valley in the early 1990, Hindus living in Chenab and Pir Panjal regions were starting to flee after being increasingly targeted by militants.

Under the 1995 scheme, 10 to 15 “ex-servicemen, ex-policemen, and able bodied young men” were enrolled in each of the 660 VDGs set up in the districts of Jammu, Doda (including Kishtwar), Udhampur and Kathua districts. The scheme was later extended to Poonch and Rajouri districts as well.

For the volunteers coming from non-security backgrounds who wanted to join VDG, they either needed to possess weapons provided by J&K Police in 1965 or 1971 or personal weapons with valid licenses, or they had to purchase weapons on their own after “being found eligible” for getting licenses by the respective district magistrates.

“At an average, volunteers in one village would be given five (.303) rifles with 100 rounds each, through District Superintendents of Police. The volunteers and number of such weapons, to be allotted in a particular village, would be determined by the District Magistrate / Senior Superintendent of Police concerned, keeping in view the credentials of the volunteers, population of the village, its location and security requirement,” the 1995 policy document notes.

The job of a VDG member was voluntary in nature, according to the 1995 scheme, but each group was headed by a retired officer of the Army, paramilitary or J&K Police, who also got remuneration of Rs 1,500 and powers of ‘Special Police Officer’, the lowest rank in J&K police.

At its peak, there were more than 27,000 village defence members in J&K. Although they were armed by J&K Police and trained by various security agencies, the 1995 scheme didn’t envision any remuneration for them.

Over the years, as the situation in Jammu improved significantly, the ‘disparity’ in powers and lack of remuneration prompted many VDG members to step down from their posts and surrender their weapons, while others have been seeking better perks, a demand that has been echoed by the BJP.

In a press conference in Jammu on Wednesday, BJP’s Kashmir incharge and former J&K lawmaker, Sunil Sharma, said the party has been in contact with the Union home ministry for “streamlining” the recruitment of VDGs. “Many VDGs have been either disbanded or they have become non-functional. Many of their members have resigned. From the last two years, the remaining VDGs haven’t even got the salary,” he said.

Under the revised scheme, each defence guard will get monthly remuneration of Rs 4,000 while those serving in “vulnerable areas” will be paid Rs 4,500. The remuneration will be credited directly to their bank accounts which was not the case earlier, “In case of vacancy, the decision to fill up the same will be taken later,” the home ministry communication to J&K chief secretary notes.