The visual of a gun, coupled with the lethargy of the Delhi Police, contribute to the psychological warfare against protesters.

The Jamia shooter and his gun. Photos: Reuters. Illustration: The Wire

New Delhi: The brandishing of firearms, public calls to murder by Union ministers, and a Jamia Millia Islamia student being shot at on Thursday are clear indicators that a full-fledged psy-war has been unleashed on protesters against the Citizenship Amendment Act (CAA).

Psy-war or psychological warfare – or psyching – is aimed at breaking down an adversary’s morale by keeping him (or her) confused and guessing what the next move will be, where and when.

This week, streetlights have been switched-off for short periods in Shaheen Bagh on cold, dark nights; a couple of goons waded into the protesters, one of them with a firearm; two journalists from Hindi TV channels with known political biases harangued the protesters who refused to let them into the venue and talk to them. The ‘journalists’ were clearly acting as agent provocateurs.

And on Thursday afternoon, a certain young man waved a pistol in the air outside the Jamia Millia Islamia university, shot at a student, injuring his hand, shouted “Delhi Police zindabad’ and “let me give you azaadi” while sprinting backwards towards the men in khaki who were spectators till the shots rang out. 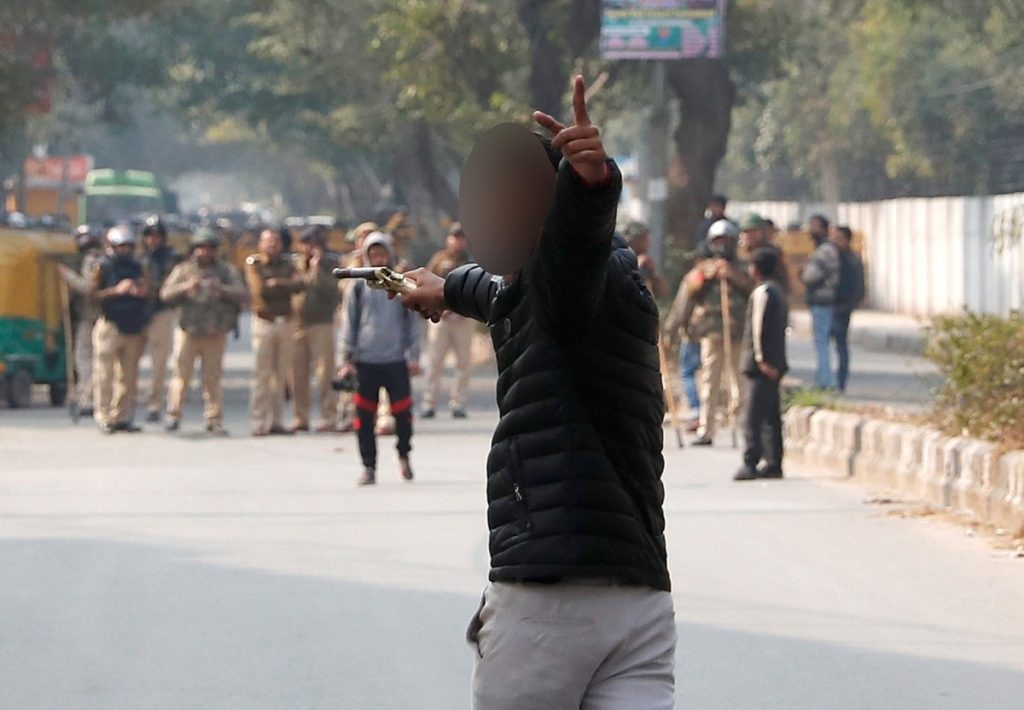 Police stand as the shooter brandishes a gun outside the Jamia Millia Islamia university in New Delhi, India, January 30, 2020. His face has been blurred as reports have said he is a minor. Photo: Reuters/Danish Siddiqui

All of this happened on January 30, the anniversary of the killing of Gandhi, by the Hindu Mahasabha activist Nathuram Godse.

Godse pumped three bullets into Gandhi on January 30 1948 before he was disarmed by an American diplomat. He had fired from an Italian Beretta pistol that he procured for Rs 500 from a contrabandist in Gwalior.

The Jamia shooter used a desi katta – a country-made pistol. Close-ups of photos of the firearm showed that it was none from among those that are licensed for civil trade from the Ordnance Factory Board (OFB) facilities near Kolkata. This is a clear violation of the Arms Act.

Civilians may be licensed to purchase pistols or revolvers, usually only from an ordnance factory near Calcutta. All other firearms are illegal. But they continue to be made and supplied through illegal networks.

In the BJP-AAP rhetoric leading to the Delhi assembly elections such assaults on the minds – more than the bodies – of the protesters are aimed at debilitating their will. But the geographical expanse of the protests beyond Delhi clearly intimidates the Centre.

On Sunday there were anti-CAA protests in as many as 56 towns and cities across the country.

Thursday’s violence near Jamia has hallmarks of a sophisticated network at play. Networks that produce and supply illegal firearms. Networks that feed into and are in turn fed by a language of discrimination that public institutions condone.

The making and supply of illegal firearms, especially in cities, especially in the national capital, is impossible without such underground networks. New Delhi in 2020 is not the Chambal of the 1980s. Or so we must presume.

Who is the shooter?

He may be dismissed as ‘mentally deranged’. It is equally possible he is a ‘lonewolf’, in the language used to describe the attacker of the Paris Charlie Hebdo office.

In the jargon of ‘counter-terror’, applied since the emergence if the ISIS, a ‘lonewolf’ is a terrorist who operates independently of an organisation, spontaneously, because he or she may have imbibed a religious ideology that believes in killing innocents for a nebulous cause.

This shooter’s social media posts leave no scope for ambiguity on what his beliefs are.

Three youths with a gun. A screenshot of the shooter’s Facebook profile.

What should the Delhi Police have done?

A mass of video footage shows that the Delhi Police were standing by even as shooter sprinted backwards towards them, to their safety, if you will, while brandishing his pistol. It was only after he fired into the crowd of Jamia students that a cop coolly walks up to him and takes his pistol.

The first step the Delhi Police should have done was to immobilise him. This is done in many countries with the use of arms such as a stun gun. A stun gun brings down the person at which it is aimed and knocks him out without causing grievous bodily harm.

The immobilised Delhi Police, on the other hand, have given further fuel to the protests with their willy-nilly lethargy. 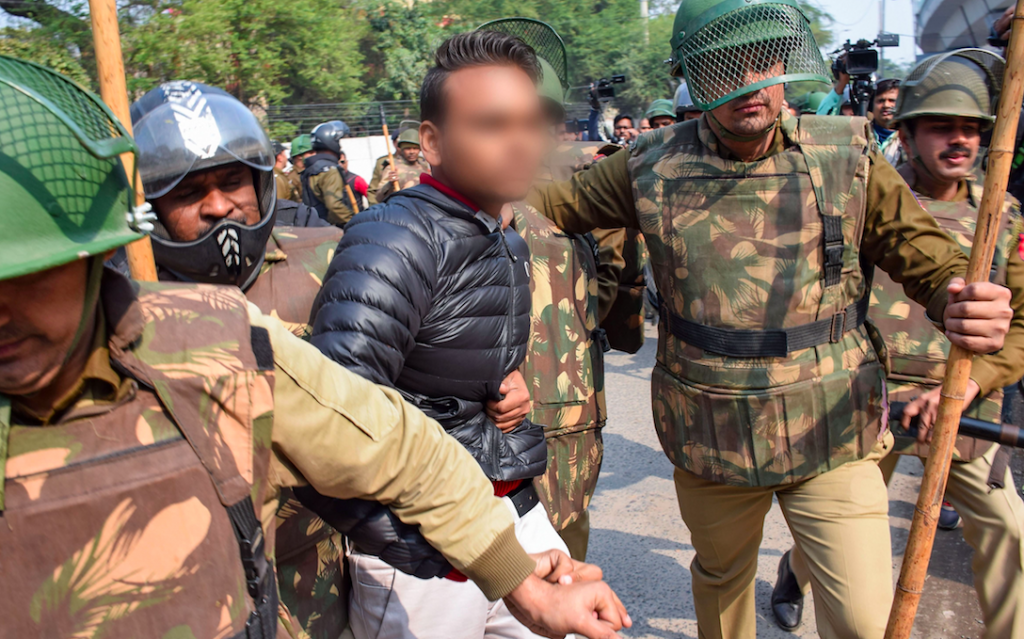 Police, after finally getting hold of the shooter. Photo: PTI

The brazenness of it will only serve to anger protestors even more.

The Delhi Police, whose commissioner Amulya Patnaik, was today granted an extension, has demonstrated an inertia that is in itself action: do nothing. Do it only when commanded.

This is again a psy-war tactic used to great effect.