If the real culprits were deliberately let off by the previous government in order to connect Hinduism to terror as the home minister says, why is the NIA not moving to catch them? 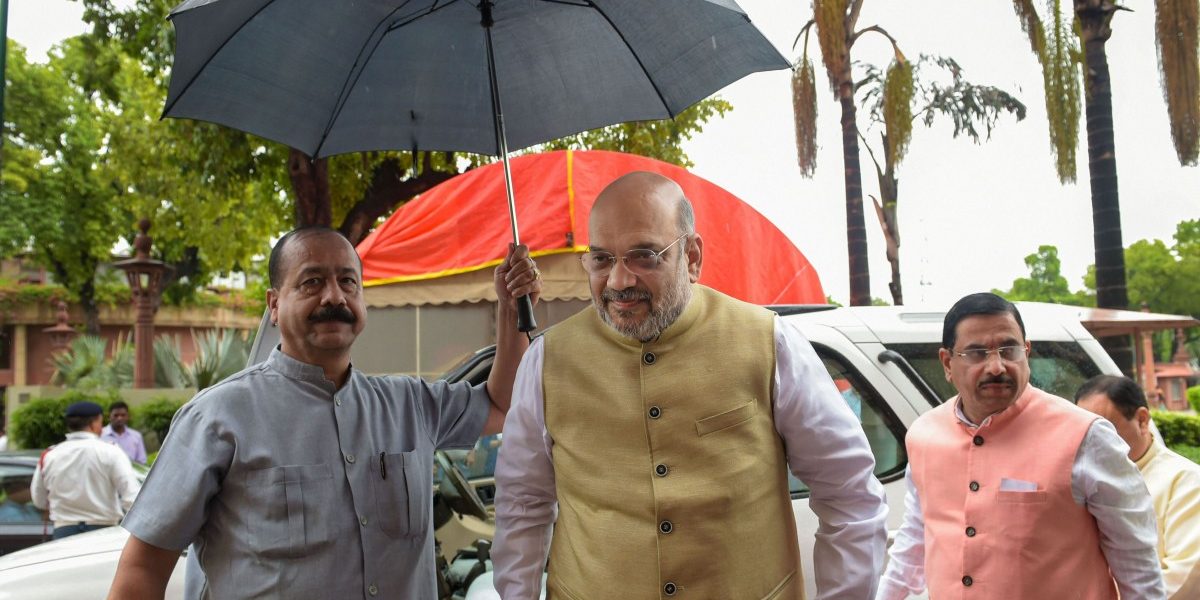 During the debate in the Rajya Sabha this week over amendments the government wants to bring in the law governing the National Investigation Agency, home minister Amit Shah tried his best to counter the criticism that the BJP has misused the NIA to get Hindutva activists accused of terrorism off the hook.

What he said was tendentious but also very dangerous. His explanation for why the NIA has not bothered to appeal the acquittal of the accused in the Samjhauta, Ajmer and Hyderabad blast cases lacked credibility and conviction. Worst of all – and I say this because the home minister of India should not wear communal prejudice on his sleeve – Shah continues to peddle the illogical claim that whenever even one person who happens to be a Hindu is accused of terrorism, this is tantamount to attacking all Hindus as terrorisms and defaming Hinduism as a religion.

When Narendra Modi came to power in 2014, the NIA was prosecuting several terrorism cases in which the main persons accused had connections to Hindutva organisations including the Rashtriya Swayamsevak Sangh.

This included the 2007 Ajmer Sharif bombing in which three people were killed and dozens injured, the 2007 Mecca Masjid blast in Hyderabad in which 14 people were killed, the 2008 Malegaon bombings and the 2007 explosions on board the Delhi-Lahore Samjhauta Express, which killed 68 people, most of whom were Pakistani nationals.

We got our first inkling of how the Modi government was going to handle these cases in 2015 itself when Rohini Salian, a prosecutor working for the NIA in the Malegaon blasts case, disclosed that she was under pressure to go soft on the Hindu extremists accused of committing the crime. Incidentally, among the Malegaon accused is Pragya Singh Thakur, now more famous as a worshipper of Nathuram Godse and of course as the person Amit Shah and Narendra Modi handpicked to represent the BJP in parliament from the city of Bhopal.

The NIA denied Salian’s explosive charge but less than a year later she was vindicated when the NIA sought to have all the charges against Pragya and five others dropped! Fortunately, the court did not agree with the agency’s astonishing claim that there was no evidence and insisted the trial would have to proceed.

In the other cases too, the NIA appears to have done its best to weaken the prosecution case, which is why all the accused in the Hyderabad and Samjhauta blast cases ended up getting acquitted. In the case of the Ajmer Sharif bombing – unfortunately for the top NIA  brass – the special court in 2017 did end up convicting two RSS activists – Devendra Gupta and Bhavesh Patel – and sentencing them to life imprisonment. A third RSS man, Sunil Joshi, who is dead was also convicted posthumously. The Ajmer NIA court noted that several of the accused are still at large. One of these Hindutva activists, Suresh Nair, has since been found and jailed.

Before I come to Amit Shah’s astonishing statements in parliament, let me underline something: The convictions of Devendra Gupta and Bhavesh Patel, both of whom had links to the RSS, is proof that the existence of Hindutva terror cells was not an invention of the Congress or of the erstwhile UPA government.

The NIA’s original investigations had unravelled the apparent involvement of a linked group of persons including Swami Aseemanand and Pragya Thakur in several bombing incidents. In all the cases, the role of three fugitives ­– Ramchandra Kalsangra, Sandeep Dange, Ramesh Mahalkar – stood out. And the dots seemed to connect very strongly when it came to the most heinous of these bombing incidents – the attack on the Samjhauta Express 12 year ago.

However, thanks to the NIA’s slipshod investigation and prosecution and its refusal to follow very obvious leads about the whereabouts of key fugitives like Kalsangra and Dange, the Samjhauta case ended up in acquittals earlier this year.

Since then, the government has not bothered to file an appeal against the acquittals – just as it hasn’t bothered to appeal the acquittals of Ajmer and Hyderabad. Opposition MPs wanted to know why and Amit Shah said three specific things about the Samjhauta case.

First, that the police had initially arrested seven people who were the real culprits but let them go. Second, this was done because there was a political conspiracy to connect a specific religion – that is Hinduism ­– to terrorism. And third, that the persons prosecuted could not be punished because there was no evidence against them.

Let’s deal with these claims one by one.

There is nothing that I could find in the public domain about the police arresting and then releasing seven people who were somehow the real culprits. Yes, the Punjab police did pick up a Pakistani national a couple of weeks after the blasts but let him go when they realised he was not involved. Bharti Arora, a senior IPS officer, told The Hindu in 2017 that the Pakistani, Azmat Ali, “was properly interrogated, and after interrogation when nothing was found against him, he was discharged.”

Even if Shah is right and that seven people – “the real culprits” – were arrested and then wrongly let go, he needs to tell us why the NIA, which is supposed to be India’s front-line agency in the fight against terrorism, has not spoken about them. Why has the NIA not prominently flashed their identities and sought to arrest them? Let me humour Amit Shah for a moment and assume that the NIA independently decided the men it prosecuted were actually innocent and is thus not filing an appeal. But why is it then not attempting to identify and catch the real culprits? Shouldn’t that be a top priority for the government?

Second, what about Shah’s claim that the erstwhile UPA government had sought to malign Hinduism by connecting it to terrorism. Now Shah is a smart man. Would anyone say that Hinduism is being defamed because Vijay Mallya and Nirav Modi have been accused of cheating banks? Has Hinduism been sullied because the NIA court in Ajmer found Devendra Gupta and Bhavesh Patel guilty of terrorism? Is Hinduism defamed because top BJP and RSS leaders were involved in the demolition of the Babri Masjid? The fact that the home minister of India can make such a ridiculous claim when a Hindu is suspected of terror and prosecuted only confirms the fact that in his mind, terrorism is linked to another ‘dharm vishesh’.

In any case, there is no mystery over how the Samjhauta case evolved. In 2016, Vikash Narain Rai, the head of the Haryana Special Investigation Team which first probed the blasts, spoke to The Wire about the work they did – and how he and his team were actually very reluctant to talk about the Hindu angle that had emerged in their investigation.

It is clear that as far as the investigators were concerned, what paid off was good old fashioned police work!

The third thing Amit Shah said was that there was no evidence against the persons who were prosecuted. Well, the judge did pull up the agency for presenting a weak case. Bearing in mind what Rohini Salian disclosed about Malegaon, perhaps the NIA wilfully sabotaged the prosecution by withholding crucial evidence. Or perhaps it did not have the sort of evidence that would have clinched the case since the judge threw out Swami Aseemanand’s confession as inadmissible.

It is also entirely possible that the botch up began in the UPA days itself, as Amit Shah alleges – that the earlier government was keen to quickly show results and this led the NIA to cut corners, or was simply incompetent. But this doesn’t mean the agency was working off a politically driven playbook. As Praveen Swami notes, “That the NIA did secure convictions against two terrorists involved in the Ajmer Sharif shrine, makes clear the agency wasn’t looking in fundamentally the wrong place — and that’s something which should concern Indians, irrespective of politics.”

I will also add that no serious attempt has been made to capture the three Hindutva activists – Ramchandra Kalsangra, Sandeep Dange and Ramesh Mahalkar – who are believed to be the brains behind the bombing. Perhaps I am wrong. Amit Shah should lay a statement on the floor of parliament listing out the efforts his government has made to find these fugitives.

Let me end with the home minister’s final fiction – that any decision to appeal a court verdict is taken by law officers alone, and not by politicians. “This is not a government that operates on the basis of a political mandate”, he told the Rajya Sabha. That is an astonishing claim, given the number of institutions that have been flattened by the ruling party’s ‘political mandate’ over the past five years.

But then who am I to be cynical. Amit Shah clearly knows what he is talking about. After all, in Modi’s first term, he was himself a beneficiary of this wonderfully independent judgment of law officers – when the CBI decided not to appeal his discharge in the Sohrabuddin-Kauser Bi murder case. As they say in Bollywood, ‘Milord, I rest my case.’