While the Navy will also test the compatibility of the US-origin Super Hornet, senior sources said the Rafale-M has the ‘advantage of commonality’. 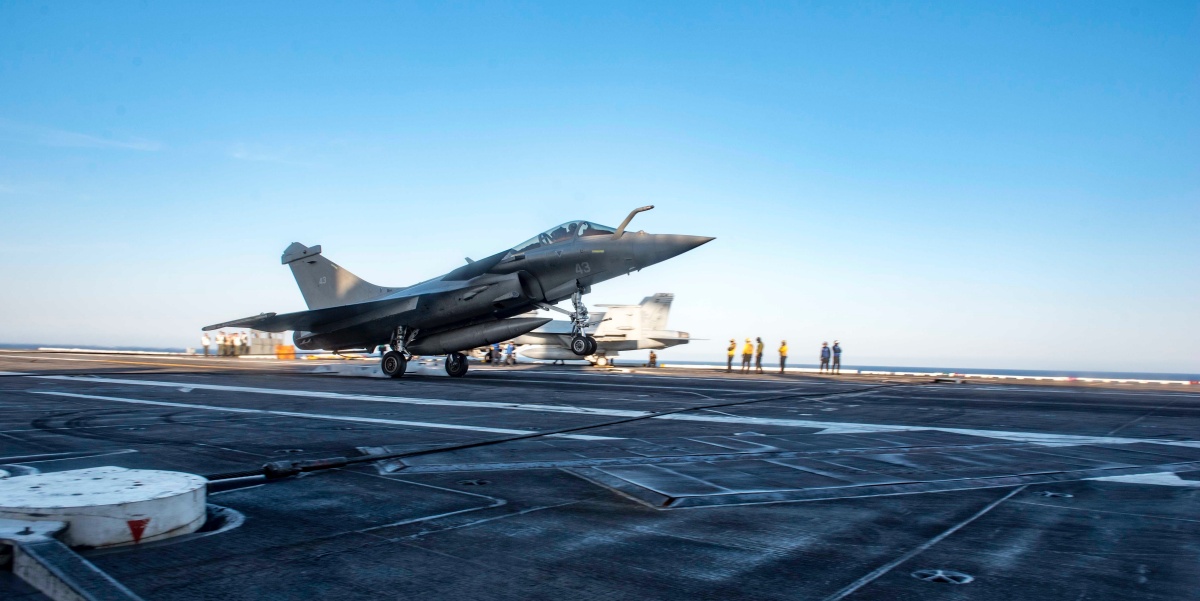 Chandigarh: The Indian Navy (IN) began evaluating its long-standing requirement for multi-role carrier-borne fighters (MRCBF) on Monday, with the French-origin Rafale-M fighter demonstrating its capabilities at its Shore Based Test Facility (SBTF) in Goa.

Official sources said that over the next few days, the IN will assess Dassault’s twin-engine Rafale-M’s ability to undertake short take-off but arrested recovery (STOBAR) flights and other related operational parameters at the SBTF’s 283-metre mock-up ski jump at INS Hansa.

The Navy’s objective is to assess whether the French fighter would be capable of operating from INS Vikrant, its 37,500-tonne STOBAR indigenous aircraft carrier that began its third round of sea trials over the weekend and is scheduled for commissioning in August, on India’s 75th Independence Day. 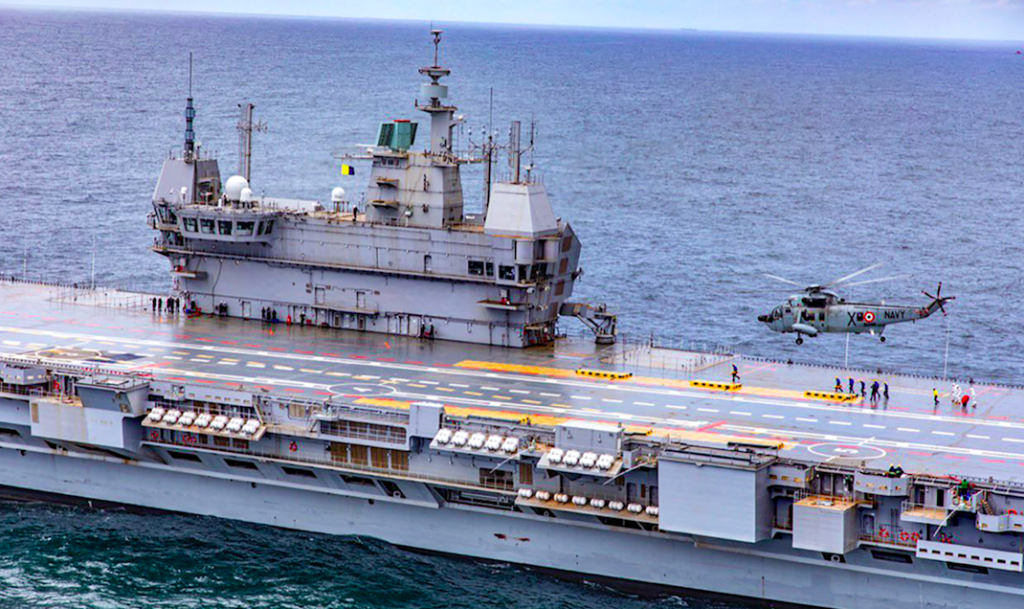 The commencement of sea trials of the indigenous aircraft carrier Vikrant. Photo: PTI

The naval fighter demonstration was aimed at meeting the IN’s January 2017 requirement for 57 MRCBF in flyaway condition, a number which naval sources said could be reduced to 36 due to budgetary constraints. In pursuit of this procurement, the IN also plans on reviewing Boeing’s F/A-18 Block III Super Hornet dual-engine fighters performance at the SBTF in March, as an alternative to the relatively lighter and smaller air-framed Rafale-M.

The French and US maritime combat aircraft were two of four such fighter types that had responded to the IN’s request for information (RfI) for 57 platforms dispatched five years ago. The other two included Saab of Sweden’s single-engine, under-development Gripen Maritime fighter and Russian Aircraft Corporation’s MiG-29K/KUB’s, which are presently in service with the IN. Both the latter fighters are not in contention for the IN’s MRCBF tender, naval sources indicated: Gripen Maritime is yet to be operationalised, while the MiG-29K/KUBs confront a questionable operational service record with the IN.

According to the Navy’s MRCBF RfI, potential vendors for the day-and-night, all-weather fighter would need to specify whether their platforms were capable of both STOBAR and catapult arrested take-off but arrested recovery (CATOBAR) operations using the Electromagnetic Aircraft Launch System (EMALS).

It stated that the fighters were being acquired for employment in air defence, air-to-surface operations, buddy refuelling, reconnaissance and electronic warfare missions from IN aircraft carriers. They would also need to be equipped with Active Electronically Scanned Array (AESA) radar, infra-red search and track (IRST) systems, laser range finders and helmet-mounted or direct retinal displays. Furthermore, their weapon suites would be required to include four beyond visual range and two all-aspect air-to-air missiles. The shortlisted platform also needed to be capable of being fitted with assorted indigenously developed and commercial off-the-shelf equipment, the RfI added.

Senior naval sources said the Rafale-M had an ‘advantage of commonality’ in the eventual shortlisting process, as the Indian Air Force (IAF) is operating 32 of the 36 Rafale fighters it had acquired in 2016 for $8.92 billion and is awaiting delivery of the remaining four. Dassault had also set up a Rafale maintenance and flight training facility at Ambala, where one of the two French fighter squadrons is based, and one which could support the Rafale-M if acquired, thereby reducing overall procurement costs considerably.

Senior IN aviators told The Wire that it made ‘good financial and logistical sense’ for the IN to link its MRCBF buy to the IAF’s, like it had earlier done in acquiring 45 MiG-29K/KUBs which comprise the combat air arm of INS Vikramaditya (ex-Admiral Gorshkov), the Navy’s sole 44,750 tonne refurbished Kiev-class carrier.

“Simply acquiring 57 naval fighters off-the-shelf would not only be prohibitively expensive but also pose inventory and logistical problems,” said a retired three-star naval fighter pilot. Commonality in the prospective naval fighter procurement made eminent sense on multiple counts, he added, declining to be named for commenting on sensitive materiel acquisition matters.

The IN had acquired the MiG-29K/KUB platforms between 2004 and 2010 for $2.29 billion,  principally because of their ‘commonality’ with the IAF’s 60-odd MiG-29 fighters, inducted into service from 1985. At the time, Russia was revamping Vikramaditya and had employed commercial and logistic reasoning with the IN by maintaining that indigenously available technical support and the associated availability of spares and maintenance for the IAF’s MiG-29s would amply and economically support the IN’s MIG-29K/KUBs variants. India’s procurement also revived Mikoyan’s flagging MiG-29 naval variant programme, rendering the IN as Russia’s sole overseas customer. The Russian Navy, for its part, operates merely 20 MiG-29K’s and four KUB trainer versions or almost half of those in service with the IN.

However, military sources said that the IN’s 45 Russian fighters – 16 earmarked for Vikramaditya and 29 for Vikrant – which were delivered to the IN between 2009 and 2017 had failed in ‘adequately meeting’ the navy’s operational requirements, as they were reportedly unable to deliver their weapons payload to their stated range with a full fuel load.

In July 2016, India’s Comptroller and Auditor General (CAG) had severely criticised the IN for technically accepting the MiG-29K/KUB fighters, despite them being “riddled with problems, discrepancies, and anomalies”. The CAG further revealed that these deficiencies included shortcomings with the naval fighter’s airframe, its RD-33 MK engines and fly-by-wire systems; in short, the entire fighter. The report also stated that the fighters had suffered repeated engine failures, with at least 10 cases of single-engine landings. Besides, of the 65 RD-33MK turbofan engines received from manufacturer Klimov, the IN had rejected or withdrawn at least 40 from service.

Consequently, operational availability of the MiG-29Ks between 2014 and 2016 fluctuated from 15.93% to 37.63%, while that of the MiG-29KUB trainers was between 21.20% and 47.14%, the CAG disclosed and matters had improved little thereafter, naval sources said. Additionally, the MiG-29K/KUB fleet continued to face severe maintenance problems, as a large number needed repair after each deck landing that damaged many of the fighters on-board components.

There were also complaints from the IN regarding Russia’s inability to incorporate all agreed-upon features onto the MiG-29Ks. This had emanated from the 2014 sanctions, still in place, imposed on Moscow by the US, European Union, and other international organisations for its military intervention in Ukraine, which had been contracted originally to provide several of the MiG-29K components.

Since Russia was consequently unable to integrate these systems and subsystems onto the fighters, the IN was left with little choice but to import them directly from Ukraine. These were then integrated onto the fighters at the Hansa Indian Naval Air Station, where the first batch of 16 MiG-29K/KUBs was formally inducted into service in May 2013 as part of the 303 Black Panthers squadron, but with limited assistance from the OEM. Industry sources said this aspect too had adversely impacted the fighters’ overall efficiency, but the IN declined to officially comment on the matter.

Hence, the IN’s unsatisfactory experience with Russian fighters and delays in the development of the indigenous Light Combat Aircraft (Navy) or LCA(N) had consequently contributed to the issuance of the RfI for 57 MRCBFs in 2017.

The LCA(N) project, for its part, continues to face developmental delays with the government-run Defence Research and Development Organisation (DRDO) currently involved in testing two of its indigenously designed, single-engine naval Mk1 prototypes. However, the IN had earlier categorically declared that it would not be inducting Mk1s that are principally a variant of the IAF’s Tejas LCA Mk1, and like it, powered by the US’s General Electric GE F-404 power pack capable of generating 80-85kN of thrust.

In late 2016, then IN Chief of Staff Admiral Sunil Lanba had said that this engine did not fulfil the Navy’s ‘thrust-to weight’ requirement, as it circumscribed the platform’s ability to operate with adequate fuel and weapons load from the deck of an aircraft carrier. Other IN aviators concurred, stating that the Navy needed the ‘back-up’ of an additional engine for supplementary power to get airborne with a greater payload and to halt quicker upon landing.

Consequently, in mid-2020, the Union government approved the Rs 800 crore development of a twin-engine deck-based fighter (TE-DBF) by the state-run Aeronautical Development Agency (ADA) that was tasked with conducting the LCA(N) Mk2’s first test flight within six-seven years and inducting it into service 2030-31 onwards.

They said the proposed fighter, with an all-up weight of 24 tonnes, would be powered by two US GE F-414 afterburning turbofan engines, each of which was capable of generating 90kN of thrust to enable the aircraft to operate with a 3.5 tonne payload of fuel and weapons. Several design features of the proposed fighter were presently under evaluation and included a tail-less delta wing version and one featuring canards to enhance agility, especially at high angles of attack or during a stall.

Meanwhile, the ongoing flight demonstrations by the Rafale-M fighter and those imminently by the F/A-18 Super Hornet, exhibit the urgency of acquiring naval combat aircraft for Vikrant at a time of great turbulence in the Indian Ocean Region (IOR) and the IN’s ‘coming out’ as a ‘pivot’ force in this area. Globally, the choice of proven naval fighters is limited to just a handful; hopefully, the IN, known for focusing acutely on its operational requirements, will select the platform most suitable to optimise its resources and efficiency.