It is no secret that many senior officers are increasingly identifying themselves with the 'Hindu nationalism' of the BJP-led administration, that in turn unashamedly seeks to exploit military achievements for political gain. 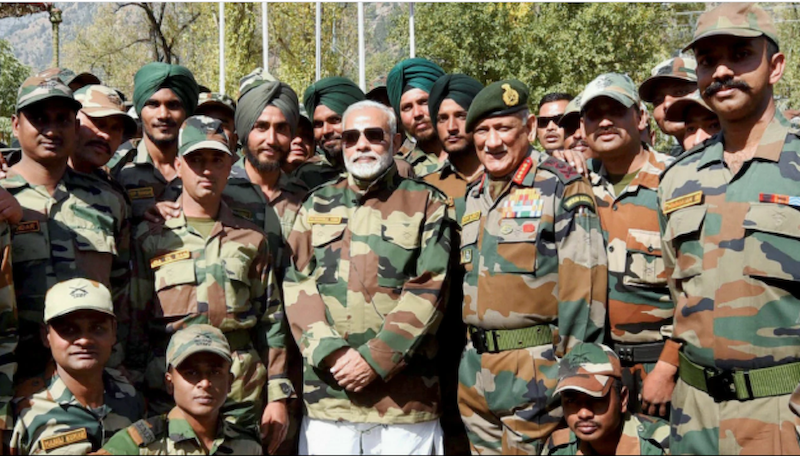 The din over the increasing politicisation of India’s military is mounting, as is the clamour over the professional competence of its senior personnel and their associated promotion processes.

An acerbic debate has erupted in recent days in the print and online media, concerning not only mediocre officers manning the services higher command structure, but also the burgeoning military-politician nexus that guarantees reciprocal benefit.

One of the principal contentions proffered in this jousting between civilian criticism of senior military ineptitude and the feeble, almost apologetic riposte, is that in light of growing nationwide incompetence, corruption and crumbling institutions, can the services be any different. After all, parrots the staple military argument, all service personnel too are hewn from the same human resource that corruptly, venally and amorally mans the civilian sector.

Without doubt, that is irrefutable.

But what is equally irrefutable in this rather unresolvable debate, is that almost to a man – and now woman – the military posits itself as being distinctive and superior, almost alien-like, and operating by an elevated ethical and moral code, that merits them being placed on a pedestal.

If that is indeed the case, the services should walk their bold talk, which unfortunately, they do not as a burgeoning number of military personnel have been charged and convicted of corruption, illegally off-loading subsidised canteen goods, specially liquor, on the black market. Above all, senior ranks lobbying politicians for promotions and employment after retirement have steadily proliferated in recent years.

Simply put, the military is inclined to set the moral tone for others by spurning double standards, except when it suits it to do so otherwise. It’s also a truism that collectively the Indian military does little or no wrong, and all its myriad inefficiencies, operational and administrative, stem from it being a powerless and neutered pawn of the scheming civilian ‘babu’. And while it’s widely accepted that the hidebound and largely ill-informed Ministry of Defence (MoD) bureaucracy is overbearing and regressive, it’s equally apposite that the military too remains a victim of its insularly structured systems and equally inflexible procedures, many dating back to colonial times which it has mindlessly perpetuated.

However, this was not always the case.

Many old timers recall that till the late 1980s, military officers were considered upright men, respected in society and eagerly sought after by parents as suitable matches for their daughters. Retired army jawans talk nostalgically of the days when a mere note from their commanding officer, or his equivalent in the air force and navy to the local authorities back in his town or village, carried weight and invariably guaranteed a positive outcome.

Also Read: How China Turned the Tables on India and Converted 1993 Agreement into a Land Grab

Those were times when the esprit d’ corps in the apolitical services was strong. Salaries were low, but the overall lifestyle was grand in expansive cantonments, bases and institutions bequeathed by the colonial administration. In reality, many officers at the time were boisterous boys trapped inside grown bodies, seeking to indulge passions like shikar, riding, polo, mountaineering, assorted sports, outdoor living and danger at state expense, as expansive colonial traditions had made military service an alluring calling.

From independence till well after the third war with Pakistan in 1971, there was ample opportunity for such magnanimity, and many who served in the military during this period were proud second, if not third or fourth generation soldiers, mostly from the army. The Royal Indian Air Force, later the Indian Air Force, was raised in 1932 and the Royal Indian Navy, later the Indian Navy, was inaugurated two years later at Bombay in 1934.

In return, the country’s faith in, and respect for its soldiers was adequately vindicated, except for the disastrous 1962 war with China, in which India came off worse. But in this instance it was widely acknowledged, as it is even today, that the ignominy was due almost exclusively to arrogant and self-obsessed politicians, and not the army.

We will never know the reality about this debacle, till the compete 1963 Henderson-Brooks inquiry report into the fiasco – named after the three-star army officer who headed it – is officially made public. Successive governments have incredulously claimed that the report, of which just two copies exist, still remains ‘operationally sensitive’, whatever that may mean.

But it’s a delicious irony that over five decades later, the very politician that generations of soldiers had vilified for duplicity, ineptitude and for completely misreading military matters, has emerged as his patron –  to manipulate for cynical political ends.

But more of that later.

The flamboyance, bravery and tactical brilliance of all military ranks and services in the wars with Pakistan is well recorded, and the subject of study in combat institutions around the world. It is rarely acknowledged, even domestically, that in 1971 the Indian army single-handedly achieved what even the US with all its might and technical wizardry has not managed since World War II – it helped give the world a new nation, Bangladesh.

In those days, politics was rarely, if at all, discussed by officers who, if passed over for promotion, retired gracefully, confident of their status in society. Dissidence was not discouraged within the respective services and promotions, the bane of the military presently, were largely merit-based. Undeserving or passed-over candidates usually never crossed their limits of incompetence and quietly faded, rarely ever resorting to litigation to secure higher ranks. Today, civil courts and military tribunals are overloaded with promotion-related cases.

Army chiefs and senior commanders brooked no political interference in operational matters, and were listened to with respect by the political establishment. The story invariably cited by old timers to reinforce this facet concerns General – later Field Marshal – Sam Manekshaw, India’s army chief between 1969 and early 1973.

When asked by Prime Minister Indira Gandhi to move into East Pakistan in early 1971 in response to the refugee inflow into India, Gen Manekshaw firmly told her that it would take at least 10 months before the country’s forces were combat-ready. Gandhi’s suggestion, Gen Manekshaw firmly declared, presented him with problems far more complex than what had been the bane of the German general staff for more than 50 years across two World Wars – multiple enemies.

And, since it would be unwise to rely on diplomatic assurances that the Chinese would not react in support of Pakistan, the savvy Mankeshaw proposed that India wait for the winter snow to block the northern passes to obviate Peking’s involvement. The hiatus would also give the Indian forces time to prepare for war.

Gandhi listened; and Bangladesh came into being in December 1971.

This victory and Pakistan’s dismemberment was the apogee of India’s military; it was a sheen and exalted status it was to gradually lose. Soon after, its professionalism and apolitical stance began unravelling after the Third Pay Commission in 1973, when officer ranks were diluted to enhance career prospects. Periodic cadre reviews thereafter, further led to a lopsided rank structure, creating a situation where lieutenant generals, amongst the senior most army officers, and their equivalents in the navy and air force, began discharging duties previously performed by middle ranking colonels and half-colonels and corresponding officers in the other two services. 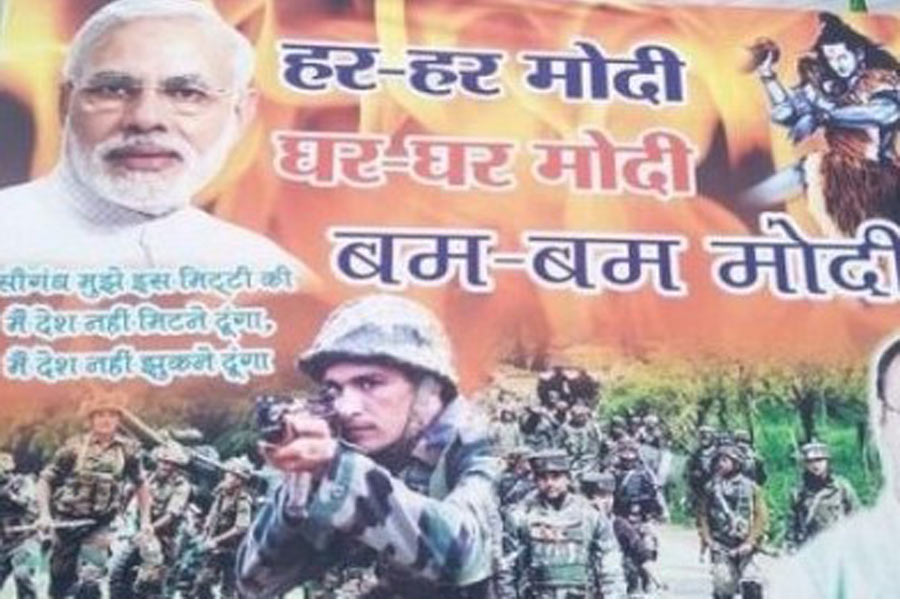 A propaganda poster in which the exploits of the army are used to promote the political prospects of the ruling BJP. Photo: Kochi Post

For its part, the military furtively seeking parity with their civilian counterparts – though vociferously denying this publicly – were content with this attenuation and the baubles successive government provided them. Pressure on promotions up the greasy pyramid-like edifice – determined in recent decades on decimal point weightages by computers – further prompted pitiless competition.

Accordingly, obsequiousness and servility gained ascendency within the services, especially the army, which a former Indian Navy chief qualified as an ‘indigenous cultural trait’. Writing recently in response to Mohan Guruswamy’s critique of proliferating sycophancy in the military as an avenue for promotion, Admiral Arun Prakash declared that “we all known that age, rank and financial status demand much more deference in India than anywhere else in the world”.

But to his credit, Adm Prakash admitted that many fine officers did not get promoted for either their ‘non-conformity or forthright views’ or both. He goes on to add that the ‘evil of sycophancy will undermine the roots of India’s military’ unless, he states wishfully, the senior leadership curbs it ruthlessly. It’s a dead cert that the formal navy chief’s fantasy is unlikely to ever materialise and servility and fawning in the services will only proliferate.

Obsequiousness and flattery is indeed a trait that is frequently taken to lofty heights in many Indian Army messes and parties, where senior ranks are embarrassingly adulated by their juniors seeking laudatory annual confidential reports (ACR), the sole passport or gateway to promotions. There have been gratuitously embarrassing instances of junior officers ingratiatingly beseeching a senior at largely uniforms-only gatherings, to accept ‘just one more drop of whisky sir ji, please one small drop sir ji’, as the latter unsteadily staggers his way around the gathering.

Doubtlessly, this observation will evoke widespread condemnation and denunciation; but conversely many such critics will surely have been witness to similar or worse toadying behaviour at some point in their careers, or perhaps have been – or even continue to be – culpable themselves.

On the wider canvas, the Faustian bargain between solider and politicians too has intensified in recent years. It is no secret that many senior service personnel are increasingly identifying themselves with the Hindu nationalist BJP-led administration, that in turn unashamedly seeks to exploit military achievements for political gain.

A host of senior serving and retired military officers openly acknowledge that since 2014, ‘political expediency’ has been factored into several of their tactical operational plans and wider strategic decisions. This symbiotic relationship has suited both parties.

Ruling party politicians successfully exploited what passed for military gains on the election campaign trail, to project the BJP’s ‘robust’ handling of national security issues. And, in turn, the self-centred and pecuniary-minded soldiery, in most instances, was rewarded with promotions whilst in service or lucrative employment after retirement, or in some cases both.

This is best illustrated by the army’s September 2016 ‘surgical strikes’ against militant launch pads across the line of control in Kashmir and the IAFs reported bombing of an Islamic terrorist training centre at Balakot in Pakistan’s northwest Khyber Pakhtunkhwa province in February 2019.

Skilfully portraying both these ‘virile’ responses against a lesser enemy ensured the BJP a massive victory in the Uttar Pradesh state elections in early 2016, weeks after Modi’s ruinous demonetisation initiative. The latter airstrike proved even more electorally fortuitous: the BJP returned to power at the Centre after the 2019 general elections with even greater numbers than previously.

For the services, this bargain has ushered in the Department of Military Affairs headed by a chief of defence staff or CDS and many more jobs for the boys, amongst other gratuities, mostly financial that the country can ill afford, as these continue spiralling. But regrettably, once again, having lobbied for a CDS for nearly two decades, the military remains clueless regarding his tasks and responsibilities, which they are now in the process of haltingly enumerating.

Individually, however, it remains to be said that most faujis are generous, gregarious and fun-loving. They form great friendships. Many are humorous and engaging raconteurs, as their variegated service tenures take them to remote and esoteric locations that a majority of us are either not familiar with or will ever visit, and their human interactions are diverse.

But collectively, they remain blameless and provide everyone else admirable advice on how to be. Sadly, they are incapable of taking it themselves and poised to lose their exclusivity.