The Army says that recruiting young people for short periods will help it save salaries and pensions, and “decrease the frustration” of officers who are released in their mid-30s after 10-14 years of short service. 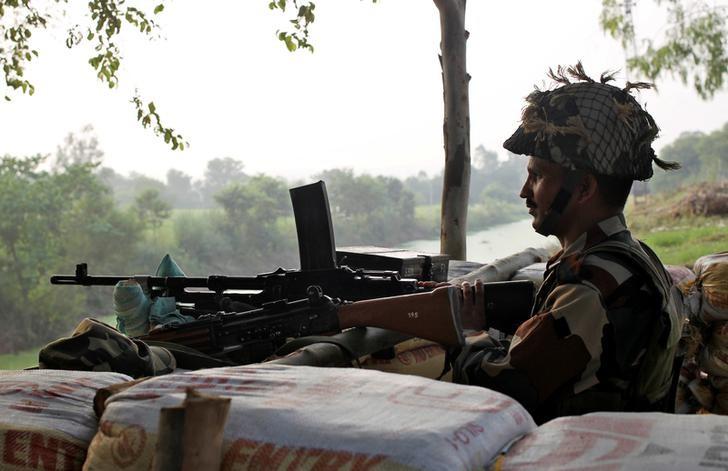 An Indian army soldier keeps guard from a bunker near the border with Pakistan in Abdullian, southwest of Jammu. Representative image. Photo: Reuters/Mukesh Gupta/File Photo

New Delhi: The Indian Army appears to have taken a leaf out of Prime Minister Narendra Modi’s motto of turning an aapda (disaster) into an avsar (opportunity). Two days after the prime minister, in his fifth address to the nation during the coronavirus-induced lockdown, talked about how the COVID-19 crisis has helped India manufacture two lakh personal protective equipment kits and the same number of masks everyday, the Indian Army has now proposed a three-year “internship” for young people.

Citing that there is a “resurgence of nationalism and patriotism” while acknowledging that “unemployment in our country is a reality”, the Army now plans to recruit interns, both as officers and soldiers.

According to the Indian Express, a government’s internal note mentioned the Army’s recommendation to recruit those young people who “do not want to make defence services their permanent vocation, but still want to experience the thrill and adventure of military professionalism” for a short, voluntary “tour of duty”.

“The proposal is a shift from the concept of permanent service/job in the Armed Forces, towards ‘internship’/temporary experience for three years. Unemployment in our country is a reality, however there is resurgence of nationalism and patriotism,” says the note.

Army spokesperson Colonel Aman Anand confirmed that the proposal was being discussed currently, and said that the eligibility conditions for new recruits will not be relaxed. However, he also emphasised that if the proposal is accepted, the “tour of duty” will not be compulsory.

“The “major crux”, says the note, lies in making the proposal “attractive to the government, Armed Forces, corporates and most importantly the individuals” who opt for it,” the daily reported.

The Indian Army has proposed that interns’ earnings during their military stint could be made tax-free, and they could also be given preference in public sector jobs and postgraduate courses.

“The government may not make ToD (tour of duty) as a compulsory criteria for central/state jobs, however, any edge in terms of qualitative/quantitative/supernumerary criteria will give the scheme a boost,” it says.

Interestingly, such a proposal has come at a time when several Sangh parivar affiliates have expressed their wishes to help the Indian Army in a situation of war. In 2018, Rashtriya Swayamsevak Sangh chief Mohan Bhagwat had stoked a controversy when in one of his speeches in Muzaffarpur, Bihar, he had said that the RSS cadres can be deployed at the border in a matter of days while the army would take “6-7 months”. Later he clarified that he in no way compared the ability of the Indian Army with the RSS cadres, but was merely expressing the organisation’s willingness to help the armed forces in a crisis.

However, the Army says that recruiting young people for short periods will help it save salaries and pensions, and “decrease the frustration” of officers who are released in their mid-30s after 10-14 years of short service.

“Pointing out “immense financial benefits to the organisation due to reduction in pay and gratuity payouts”, the Army has said the cost of a three-year service per officer will be a fraction of the cost incurred on Short Service Commission (SSC) officers,” the newspaper reported.

According to the proposal, the Indian Army spends anywhere between Rs 5 crore to Rs 6.8 crore on SSC officers who leave after 10-14 years. The cost includes pre-commission training, pay, allowances, gratuity and leave encashment among others. If the officer decides to join the service permanently, the cost increases further.

Even for soldiers, who usually serve for 17 years, the Army spends Rs 11.5 crore per person.

However, the new proposal pegs the estimated cost on an intern deployed for a three-year service as between Rs 80 lakh and 85 lakh.

Even though cost-cutting is one of the primary reasons for such a proposal, the Indian Army also thinks that the new system would help “channelise the youth energy into positive utilisation of their potential”. It also added that “rigorous military training and habits inculcated will lead to healthy citizenry”.

The proposal says that India will benefit from “trained, disciplined, confident, diligent and committed” young men or women after their military tenure, and that an “initial survey” indicated that these interns will also be preferred over fresh graduates in the corporate sector.

If accepted, the proposed scheme will first be introduced on a trial basis with limited vacancies, and if found sustainable, it will be expanded further, the Army says.