That India was constantly looking over its shoulders for US approval to sign a contract for a system critical to its national security does not bode well for its relationship with Russia, which has stood by India, politically and militarily, for decades.

The signing of the S-400 Air Defence Missile System (ADMS) deal is good news for India and its military. However, the uncertainty that dogged the inking of the contract till the last moment – it was not clear until this morning if this would happen – was suggestive of the looming shadow of the United States on India’s foreign policy. This cannot be good for the future of India’s bilateral engagements with other countries, especially Russia.

But first, the military criticality of S-400 for India. India has bought five regiments/units or 40 launchers (each regiment/ unit will have two batteries with four launchers each), and about 1,000 missiles. Interestingly, 70% of purchased missiles are of very long range (400 km) and long range (350 km) category and the rest have lower ranges of 300km and 250km. The S-400 surveillance radar with the range of 600 km and 360 degree coverage can track 70 targets. The S-400 is not an upgraded version of S-300 ADMS – this was offered to India in 1998 – as is commonly believed, but has an entirely different technology, radar capability and missiles.

While S-400 will have no transfer of technology or defence offsets, Russia has agreed to set up maintenance facilities in India; help integrate the S-400 with India’s indigenous Akash surface to air missile system (which was made with Russian hand-holding and is still not more than 40% accurate); expedite procurement despite having a full order book till 2022; and consider the transformational S-500 system (with capability to kill low-earth satellites) currently under trial, for sale to India.

Interestingly, the Indian Air Force (IAF) intends to use S-400 in the ‘offensive air defence’ role rather than its designed role of protecting high-value targets like Delhi, for which it was originally proposed. Through ‘offensive air defence’, the IAF wants S-400 to take out enemy Airborne Early Warning and Control Systems (AWACS) — an airborne radar meant to control the battlespace by helping direct fighter aircraft to their targets. The AWACS — a major force-multiplier — would be extremely threatened within S-400’s 400km range.

Once enemy AWACS have difficulty in command and control of the battlespace, enemy aircraft would not be able to operate at all altitudes, making them vulnerable inside Indian airspace. So, when the chief of air staff, Air Chief Marshal B.S. Dhanoa said that he would use 36 Rafale and S-400 to ‘plug the gaps’, he was referring to this role for S-400 to make up for his fighter aircraft deficiencies. However, destruction of enemy aircraft with expensive S-400 missiles would not be its cost-effective battlefield utilisation; hence it is likely to be avoided, though the shorter-range missiles might be used for this purpose.

The looming shadow of the US

While the military requirement of the S-400 ADMS programme has been clear from the beginning, the political willingness became murkier over the years. Several times the government of India came close to signing the contract but always dithered at the last moment. Even today’s contract signing was preceded by weeks of uncertainty, stemming from the fear about US slapping Countering America’s Adversaries Through Sanction Act (CAATSA) upon India.

Apparently, a month ago when Russian officials came to India to do the groundwork for the impending summit meeting between Prime Minister Modi and President Putin, national security advisor Ajit Doval told a senior member of the Russian delegation that he would not commit on signing of any contracts till he had consulted a few friends. To leave none in doubt, he added that he would be travelling to the US soon, and only after his visit would the government make up its mind about inking the contract.

Obviously, he was looking for more than an assurance from the US that India would be exempted from CAATSA. This was clearly humiliating for the Russian delegation, which comprised senior members of Kremlin’s inner circle. The government of India continued to send mixed signals to its Russian counterparts, so much so, that till this morning nobody knew for sure if the deal would be done. 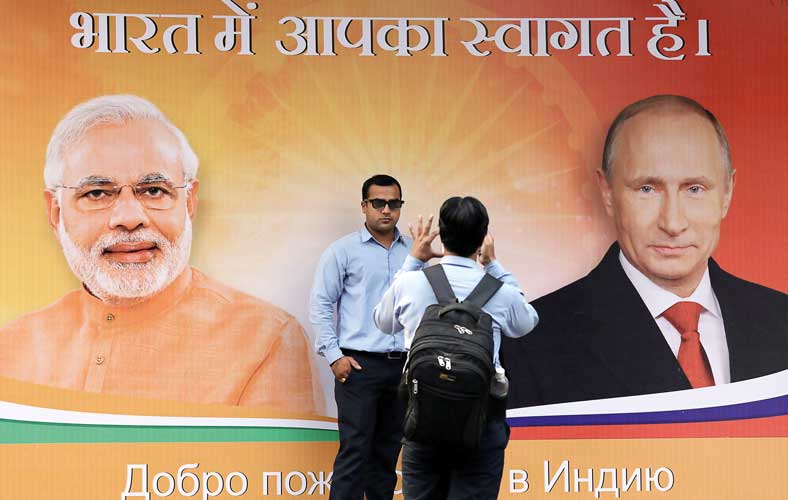 Traditionally, summit meetings are prepared well in advance. Both sides know what commercial agreements would be signed, because they require a lot of paperwork, which has to be prepared in advance and vetted by both sides. What’s more, most defence contracts involve several sub-contracts with different entities. Till Putin’s departure from Moscow for India, his aides had no clue about which contracts, if at all any, would be signed during this visit. The only thing that they had clarity about was that the contract for additional Mi-17IV helicopters would not be signed due to lack of funding during this summit meeting, the Indian ministry of defence had informed Russia weeks ago.

This is nothing short of embarrassing for a government that projects itself as the sole custodian of national security and upholder of strategic autonomy. That the government of India was constantly looking over its shoulders for approval to sign a contract for a system critical to its national security, does not bode well for its relationship with Russia, which has stood by India, politically and militarily. Remember the May 2018 Wuhan summit followed by the Sochi summit in which Modi sought out Putin as the guarantor of his peace talks (on disputed border) with President Xi Jinping after the June 2017 Doklam crisis. This is not all. Russia is the only country which has given restricted technologies to India.

There is a strong lobby in Russia which wants to have deeper defence relations with Pakistan. Since the June 2015 visit of Pakistan army chief, General Raheel Sharif to Moscow and the sale of four Mi-35 helicopters (for counter-terror operations), Pakistani delegations regularly visit Russia. At the recent Army-2018 defence exhibition held in Russia in September this year, I saw many Pakistani officers hobnobbing with Russian defence companies. They were interested in everything, from fighter aircraft, air defence systems to even joint defence ventures with Russian companies.

Many Russians, I met during the Show, argued that since India has drifted towards the US, why should it object to Russia selling arms to Pakistan. Kremlin has been resisting the pressure from its defence industry in the hope that India would reset its ties with Russia.

Given the volatility of Indian neighbourhood, it is critical that New Delhi understand the importance of balancing its relations with major powers instead of pushing its luck with one.