UK-based 'Janes Defence Weekly' reported that the SSBN, known as S4, was launched on November 23 and had been ‘relocated’ to near the ‘fitting-out wharf’ that was presently occupied by INS Arighat. 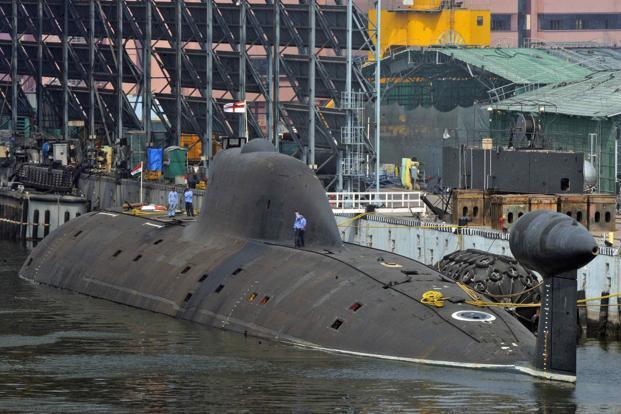 A file photo of INS Arihant submarine at the naval warehouse in Visakhapatnam. Credit: Reuters

In its December 29 report, the magazine declared that the submersible ballistic nuclear submarine (SSBN), known simply as S4, was launched on November 23 and had been ‘relocated’ to near the ‘fitting-out wharf’ that was presently occupied by INS Arighat, the second such nuclear-armed missile submarine. Arighat was launched in November 2014, and currently awaits commissioning that has reportedly been delayed possibly due to the ongoing COVID-19 pandemic, Janes said. Consequently, the Indian press had not reported the S4 SSBN’s launch.

The British publication further reported that satellite imagery had confirmed that at 7,000-tonnes, the S4 SSBN was ‘slightly larger’, with a load water line measurement of 125.4m compared with 111.6m of the 6,000-tonne INS Arihant, the lead boat in this class. It categorised the S4 – and successive boats – as ‘Arihant-stretch’ variants.

The magazine went on to infer that the satellite imagery indicated that the newly launched boats’ additional length ‘accommodates expansion of the submarine’s vertical launch system which has doubled to support eight (missile) launch tubes’. This, it said, would enable the SSBN to carry eight K-4 submarine launched ballistic missile missiles (SLBM), or alternately 24 K-15 SLBMs with respective strike ranges of 3,500 km and 750 km, respectively. The K-4 SLBM, however, remains under development and its pontoon launch is anticipated.

Developed jointly by the Defence Research and Development Organisation (DRDO), the Department of Atomic Energy (DAE), select Indian Navy (IN) personnel and Russian scientists and technicians, the S4 boat and the follow-on, under-fabrication S4* like the previous two SSBNs, comprise a critical part of India’s three-tier credible nuclear deterrent. India plans on eventually fielding at least four such SSBNs, with an option to build two more, to add maritime strike capability to its existing land and aerial-based capacity in delivering strategic weapons.

Also read: In Modi-Putin Meet, What Was Omitted From Mutually Agreed on Pacts Is Significant

Russia’s involvement in the programme in designing the SSBNs and miniaturising their reactors have long been an open, though downplayed secret amongst naval, atomic and strategic community personnel. But Arihant’s launch ceremony in July 2009 was the first time it was publicly acknowledged through the presence of the Russian naval design team and their country’s then ambassador V.I. Trubnikov. Such sensitive cooperation is also one of the underpinnings of the enduring strategic and military cooperation between Moscow and New Delhi.

Meanwhile, Arihant, which was also constructed at the SCB, was quietly commissioned into the Indian Navy in August 2016 and completed its 20-day maiden deterrence patrol over two years in November 2018. Delayed by some 15-18 years, the SSBN was scheduled to conduct its first deterrence patrol in 2017, but was reportedly damaged early that year after its propulsion compartment was flooded while in Visakhapatnam harbour. The Hindu had reported in January 2018 that water had rushed into the boat ten months ago, after a hatch at the rear of the platform was left open, a claim that was never officially confirmed nor denied.

Industry and naval sources said Arihant’s on-board systems had ‘broadly’ been duplicated in the two follow-on boats, including Arighat and the S4, which awaits formal naming.

Exact details of Arihant’s powerplant are unclear, but it is understood to be propelled by an 82.5 MW pressurised light water reactor (LWR), turning a single seven-bladed screw to achieve submerged sprint speeds of 24 kt, or about 10 kt on the surface. Its principal strategic weapon load comprises 12 K-15/B-05 indigenously developed SLBMs fired from four vertical-launch tubes and each carrying a 5-tonne nuclear payload out to a range of 750 km. The S4, on the other hand, will potentially be better armed eventually as development of the DRDO-designed K-4 SLBM would have been completed by the time the SSBN is ready for commissioning.

BEL also developed Arihant’s CMS, while a handful of Israeli and French companies provided an assortment of radar, sensors, communication equipment, and anti-torpedo countermeasures among other systems and sub-assemblies. Numerous domestic micro, small and medium enterprises (MSMEs) too were part of the SSBNs supply chain, acquiring in the process expertise in welding submarine hull sections capable of withstanding immense pressure at significant depths. They also supplied a host of pipes, pumps, cables, compressors, air-conditioning equipment and generators, in support of the navy’s wider indigenisation endeavours.

Also read: From Procuring Drone Protection to Other Weapons, Indian Navy Is Ahead of Other Services

Built with Russian steel, broadly equivalent to the US HY-80 grade, Arihant is divided into seven compartments, with main divisions for the propulsion system – acoustically damped and sealed into a 600-tonne titanium shell circa 10 m in diameter – the CMS, platform management centre, and torpedo room. It also features a double hull, sandwiching ballast tanks. Two stand-by auxiliary engines and a retractable thruster provide the SSBN with emergency power and mobility to meet operational eventualities.

The SSBN programme will eventually be supplemented by the separate indigenous production – also at the SCB – of six nuclear-powered attack submarines (that come under the SSN category) for the Indian Navy, which were first approved by the Union government in early 2015. Janes had earlier reported in late November that the Cabinet Committee on Security (CCS) was expected to imminently sanction around Rs 50,000 crore to build three of these 6,000-tonne SSNs, with the first boat scheduled for completion by 2032-33.

Financial sanction for the remaining three SSNs that were expected to incorporate over 95% of locally sourced content would ‘follow subsequently’ once the programme progressed, the magazine said. The entire SSN programme would span a 25-year period from when the boat’s construction first started, it added.

The Indian Navy’s 1999 submarine building programme – delayed by almost a decade – had envisaged a force of 24 ‘hunter-killer’ diesel-electric conventional submarines (that comes under the SSK category) with air independent propulsion (AIP) and land-attack capability, which were scheduled to have joined service by 2029-30. But delays in inducting the SSKs, and an emerging unstable regional maritime security environment, had prompted the Indian Navy to recently opt for six SSNs instead to provide it greater operational flexibility.

“In its quest to become a Blue Water force, it’s imperative for the Indian Navy to acquire SSN capability if it wants to shape the maritime battlespace in the increasingly restive Indian Ocean Region,” said Indian Navy Commodore Anil Jai Singh (retired). It’s only an SSN that can constitute the cutting edge of the Indian Navy’s offensive capability, either by themselves or as part of an aircraft carrier battle group, the former submariner added.

Other navy officers said the SSN programme would ‘harness’ the know-how and technologies gained from the SSBN project, but questioned the inexplicable lack of expertise in domestically building conventional submarines, for which foreign original equipment manufacturer (OEM) assistance remained imperative.

The Indian Navy is presently evaluating responses to the Ministry of Defence’s (MoD) July 2021 tender to two domestic shipyards to construct six SSKs with AIP and land-attack capability in collaboration with one of the five overseas OEMs under the P75(I)-India project worth over Rs 43,000 crore.

“All these variegated achievements (in designing and building SSBNs) are spread thinly across the technological spectrum without any coordination to secure success in key thrust areas, especially with regard to enhancing the country’s overall military capability,” said Amit Cowshish, former MoD financial advisor on acquisitions. Unfortunately, these successes are isolated, he lamented, adding that India also ironically qualifies for yet another major global distinction: as the world’s second largest arms importer between 2016 and 2020.