The unrelenting wear-and-tear on troops and equipment on either side has been tremendous. 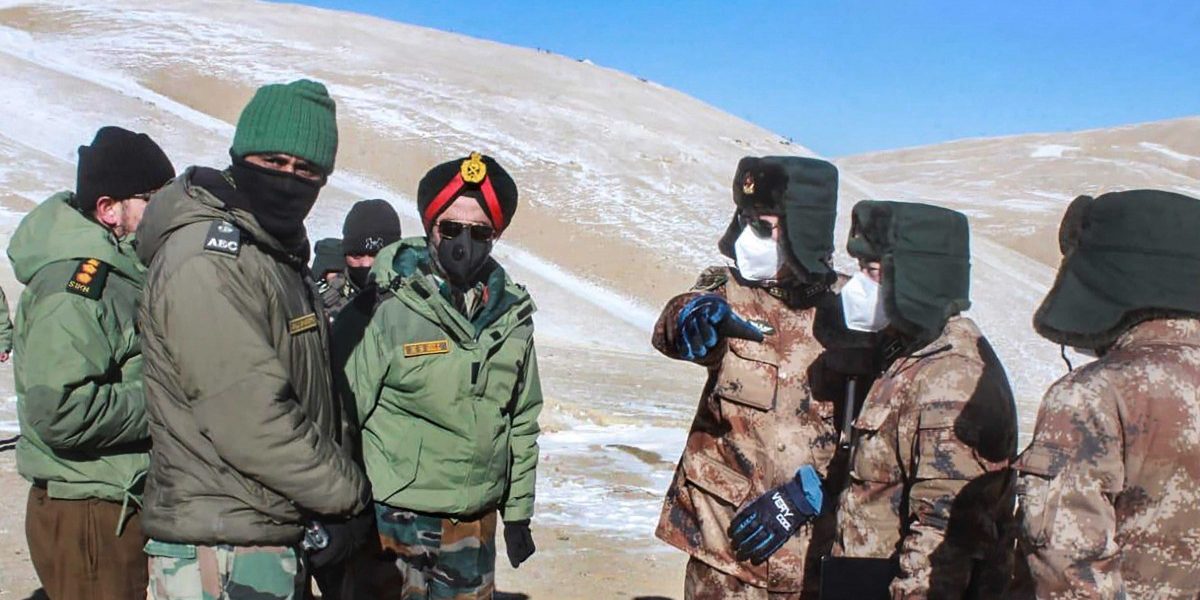 Chandigarh: Besides weightier geopolitical and strategic considerations, General Winter, or the unforgiving harsh environment in the Himalayan Ladakh region along the disputed Line of Actual Control (LAC), too seems to have precipitated the pullback of the rival Indian and Chinese armies from the bitterly contested Pangong Tso region, following their nine-month-long faceoff.

Senior serving and retired Indian Army (IA) officers said one of the lesser known aspects behind the disengagement agreement – announced by China on February 10 and India a day later – was the attrition both armies had suffered during their LAC deployments in the intense cold, October onwards.

Temperatures at many spots along the LAC, where troops and heavy armaments like main battle tanks (MBTs), howitzers and infantry combat vehicles (ICVs) were deployed May 2020 onwards, had plummeted in recent months to around -30 degrees Celsius along the unresolved frontier. This was worsened further by the even deadlier wind-chill factor rendering the cold severer, as fierce winds kicked up in the vertiginous desert region, significantly diminishing the operational efficacy of soldiers and their machines.

“Such a punitive environment has mercilessly hammered both armies,” said retired Brigadier Rahul Bhonsle, head of Security Risks Asia, a Delhi-based defence management consultancy. It’s inconceivable, he added, that this critical attrition factor did not feature in the nine rounds of talks between rival military commanders to try and de-escalate the debilitating deadlock. The last such round of talks between the respective corps commanders took place on January 24 on the Chinese side at Moldo, opposite Chushul.

Other military officers and analysts said that irrespective of the IA’s extended mountain warfare experience and the seemingly better infrastructure and equipment on the Chinese side in support of its People’s Liberation Army (PLA), the altitude and harsh weather had played an inestimably depleting role for both during the showdown that still not ended. “These operational issues simply cannot be ignored either by Beijing or Delhi for a variety of operational reasons that are common to both forces” said a two-star IA officer, declining to be named. It’s a matter of survivability, he stated.

Details of IA fatalities or debilitations, or both, triggered by high altitude and intense cold are unavailable and, understandably unlikely to be publicised even at a later stage. Doubtlessly, similar adversity has befallen PLA personnel deployed within rifle range of the IA on the LAC, especially on both banks of Pangong Lake. A dribble of news reports in recent weeks had hinted at increasing PLA casualties along the LAC due to the extreme weather but, like most Chinese military-related information, these accounts remain unconfirmed.

But a rudimentary assessment of the adverse climatic impact on assorted materiel like MBTs, 155mm howitzers and ICVs, amongst others, is calculable. It is also instructive concerning the havoc inhospitable climate can wreak on war machines despite them being ruggedised to withstand extreme weather conditions, especially cold, like the IA’s fleet of Russian MBTs acclimatised to withstand Siberian winters.

According to retired Major General A.P. Singh, an armoured corps officer who headed logistical operations between 2011-13 in XIV corps, responsible for manning the LAC against China, fuel injectors in both IA and PLA MBTs and ICVs alike freeze up, restricting or altogether stopping the flow of diesel and lubricants through them. Besides, the wear and tear on MBTs and ICVs operated by either army to keep the lubricants flowing in sub-zero temperatures was high, as they needed to be started every 2-3 hours for 20-30 minutes or more at a go to ensure their operability.

The adverse impact on the MBT’s fighting capabilities was even more severe as their firing pins and cocking thumbs were vulnerable, liable to crack when exposed to severe cold for sustained periods, General Singh said. Despite the PLA’s facilities for housing their heavy platforms, including MBT’s, being somewhat superior to the IA’s, the harsh weather made few exceptions and imposed comparable wear and tear on their tanks too, the two-star officer said.

India has deployed T72M1 Ajeya and T90S Bhishma MBTs powered by the Russian-supplied 780hp V46-6 and the V92S2 engines respectively, Sarath Russian BMP-2/2K ‘Sarath’ ICVs with the 300hp UTD engines and BAE Systems M777 155mm/39 calibre howitzers, amidst other assorted missile batteries. Official sources told The Wire that a large number of the IA’s 130-140 MBT’s would need engine replacements once they returned to base after their withdrawal had been completed.

The PLA, on the other hand, has deployed its Type 15 light tank, also known as the ZTQ-15 along the LAC. Powered by a 1,000hp locally developed electronically controlled diesel engine with fully automatic transmission, the 33-tonne tank is fitted with a 105mm rifled gun and entered PLA service in 2018. China has also inducted its newly developed PCL-191 155mm howitzers and ZBD-04 and Type 86 ICVs against the IA, all of which are operating to reduced efficiency because of the cold.

Ammunition for tanks, ICVs, howitzers and even small arms performed ‘sub-optimally’ in winter along the LAC with regard to range and targeting aspects. A recent study by the Massachusetts Institute of Technology (MIT) in the US revealed that low temperatures tend largely to render military equipment useless, as lubricants freeze and barrels on tubed artillery crack.

Consequently, artillery batteries need revised altitude-specific firing tables to place rounds on their intended targets while infantry soldiers are required to re-sight weapons and practice in the rarefied atmosphere. Besides, at extreme heights soldiers’ eyesight too changes, as low air pressure can induce corneal distortion-causing near-sightedness- diminish low-light vision and degrade depth perception, all of which add up to depreciated fighting skills, the MIT study added.

Efforts, however, to erect adequate heated shelters last year along the LAC between June and October, after the IA’s winter deployment became a certainty, and when cement-related construction is feasible were superceded by the need to build suitable soldier habitation. Specialised platform sheds were accorded a lower priority.

Besides, according to General Singh, the shelters needed for equipment like MBTs’ ICV and howitzers are much larger. In Nyoma, for instance, 23 km from the LAC, he said it had taken the IA at least two years to build sheds for T72M1’s in 2013-14 in peacetime conditions and at a spot that was relatively more accessible by road and air than the remote and craggy areas along the LAC.

“Influenced indisputably by weather conditions, the agreement to pullback troops from Pangong Lake has injected some operational prudence amongst the opposing armies after the debilitating winter months,” General Singh said. The unrelenting wear-and-tear on troops and equipment on either side has been tremendous and badly needed relief, he added.

In the meantime, there is welcome surprise in Indian official and military circles over the disengagement from the Pangong Lake region following months of hopelessness. The elaborate official narrative in Delhi attributes the troop pullback by the nuclear-armed neighbours to multiple factors, principal amongst which is India’s steadfastness in challenging Beijing’s expansionist and hegemonistic ambitions.

The Indian military’s resoluteness, especially of the IA, in deploying swiftly along the LAC after its initial lapse, and its operational dexterity last August in strategically out-manoeuvring the PLA along the Pangong Lake’s southern bank are some of the multiple facets proffered as explanation for the troop pullback agreement.

Other ancillary factors, include the Ministry of External Affairs’ (MEA’s) negotiating dexterity in leveraging these military advantages, the ever-ubiquitous backchannel talks between Indian and Chinese officials, and assorted economic and diplomatic coercive measures adopted by Delhi. The latter includes the Indian Navy (IN)-enabled Quadrilateral Security Dialogue, better known as the Quad and encompassing the Australian, Japanese and US navies. The Quad is viewed with some trepidation by Beijing as an anti-China grouping aimed at challenging its hegemonic designs in the strategic South China Sea and further afield in the Indian Ocean Region.

The departure of US President Donald Trump from the White House, alongside overall global anti-China sentiment over the spread of the COVID-19 pandemic and Beijing’s militarist policies and land-grab activity, are some of the other reasons attributed to the troop pullback deal with India.

According to the disengagement plan, the PLA will move east of the Finger-8 mountain spur on the Sirjap Plains, while the IA will return to Dhan Singh Thapa post on Finger-3, some 10 km away. Thereafter, the entire area in-between these two features will become a ‘buffer’ or no-go zone, with subsequent patrolling to be determined in ensuing consultations. Negotiations on a troop pullback from the Gogra Hot Springs area and the Dapsang Plains too are to be decided later through analogous military and diplomatic talks.

Has this amorphous General contributed in compelling the IA and the PLA into pulling back from the brink of an interminable deadlock and possible conflict?