With New China Faceoff, India's Nightmare of a Two-Front War May Be Coming True

Despite its macho proclamations in the past, the country’s military and defence establishment appears somewhat overwhelmed. 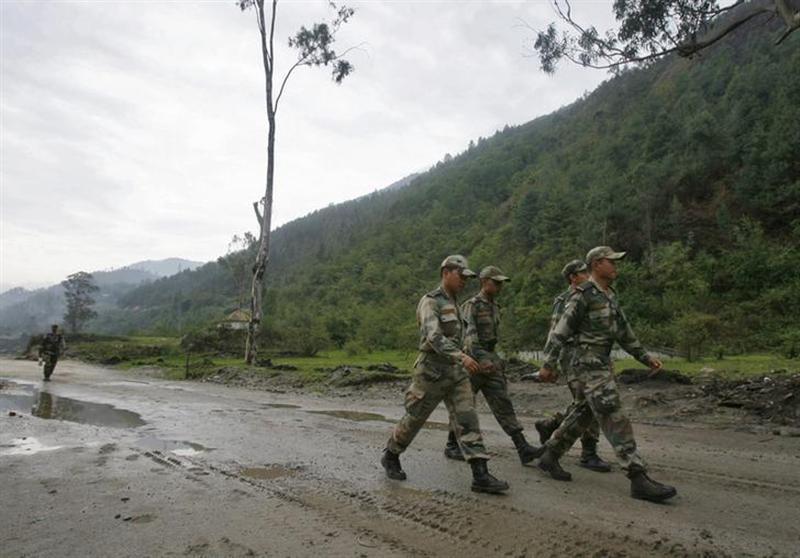 Indian Army soldiers march near an army base on Tezpur-Tawang highway, which runs to the Chinese border, in Arunachal Pradesh May 29, 2012. Photo: Reuters/Frank Jack Daniel/Files

Chandigarh: The nightmare scenario that successive Indian service chiefs have periodically enunciated, regarding the possibility of fighting a two-front war against collusive military and nuclear allies Pakistan and China, appears to be progressively advancing.

The ‘pre-emptive’ action by the Indian Army on the night of August 29-30 against China’s People’s Liberation Army (PLA) – which was attempting to further transgress the Line of Actual Control (LAC) in eastern Ladakh along the southern bank of the Pangong Tso lake – has further exacerbated the military standoff, continuing since early May.

Details of this latest fracas are still coming in, and a military commanders’ meeting is in progress, but the Ministry of Defence (MoD) statement on August 31 indicated there had been another confrontation between the two armies, further escalating their standoff levels and raising the spectre of India facing a perpetually hot second front.

Presently there are around three additional Indian Army divisions of around 60,000-70,000 personnel to supplement some 20,000 troops from the Leh-based 3 Division tasked with minding the LAC in eastern Ladakh against the PLA. These formations are backed by over 120-odd T72M1 and T90S main battle tanks positioned at various sensitive locations in eastern Ladakh, which in turn are augmented by the newly inducted BAE Systems M777 155mm light weight howitzers, varied missile batteries and associated systems. All these platforms have furthermore been airlifted to the region by the Indian Air Force’s (IAF’s) latest CH-47F Chinook heavy lift helicopters and C-17 and C-130J-30 fixed wing transport aircraft.

Indian military planners are agreed that collectively, these extra troops had escalated the situation ominously along the LAC from mere border management deployment to ‘forces-in-being’, in effect significantly upping the ante on the conflict escalation ladder. The corresponding PLA ‘forces-in being’ too are amply supported by formidable armour, artillery and missile assets, appreciably raising conflict prospects for India, warn army veterans.

Even the Chief of Defence Staff (CDS) General Bipin Rawat had categorically declared on August 24 that India’s military options, with regard to dealing with the PLA in eastern Ladakh, were ‘available’, if diplomatic and military talks failed to resolve the impasse. The CDS, however, declined to elaborate on his incendiary statement. Two days later, on August 26, foreign minister S. Jaishankar said the border situation along the LAC was the most serious after 1962, when the neighbours fought a war over their unresolved frontier dispute in which India came off worse.

“In fact after, after 45 years, we have had military casualties on this border,” Jaishankar declared in an interview to Rediff.com, adding that the quantum of forces currently deployed by both sides of the LAC was also unprecedented. The foreign minister was referring to the 20 Indian soldiers, including an officer of colonel rank, who had died in a clash with the PLA on the night of June 15-16 in the Galwan region.

Are these not perceptibly disturbing foundation blocks, indicating the opening up of a second live conflict front for India, in addition to the one prevailing with Pakistan along the restive Line of Control or LOC in Kashmir, and one the army and country can ill afford?

Five rounds of Indian and Chinese military commander talks, from mid-June till early August, had yielded little in relieving the PLA’s siege. In fact, the overconfident PLA has indicated that its disengagement and pullback from Indian territory has been completed, even as it continued to stay put in the Pangong Tso lake area and hold large swathes of the Depsang Plains to its north. Military sources claim the Chinese pull back from other regions around the LAC over the past few weeks has, at best been ‘desultory’, and the overall situation certainly not in consonance with New Delhi’s demands. Although in several areas like Galwan and the Hot Springs-Gogra sector China had pulled back, it continues to block the Indian Army from negotiating its patrols in the Finger 4-Finger 8 mountain spur areas. This situation, official sources said, was also in no way in keeping with what was determined in the series of Indian and Chinese military commander meeting.

In short, the Chinese whispers have more than asserted that the current ground situation along the LAC is as good as it gets and is unlikely to alter.

Former foreign secretary Shyam Saran has counselled patience, citing the instance of a similar face-off in 1987 between the Indian Army and the PLA, for analogous reasons along the LAC in the Sumdorong Chu region of Arunachal Pradesh, that took nearly eight years of talks to eventually resolve in 1995.

In an interview to The Wire on August 27, Saran stated that China wanted Delhi to acknowledge the revised territorial status quo in Ladakh, a situation that was unacceptable to Delhi. However, he conceded that in ongoing negotiations India had limited military, economic or technological leverage with Beijing that dominated the former on all these parameters.

Saran further stated that in recent years, Pakistan’s and China’s strategic and territorial interests with regard to India had coalesced, hinting that he anticipated increased military collaboration between the two against Delhi, especially with regard to the strategic Siachen Glacier. This speculation by the former foreign secretary further reinforces the operationally apocalyptic ‘two-front’ war scenario for India.

Once the winter troop deployment of 25,000-30,000 troops along the LAC ensues October onwards, to prevent the PLA from seizing more Indian territory than it already occupies, senior military officers said it would debilitatingly render the LAC into another ‘active’ frontier, similar to the ‘hot’ 747km-long LoC. In short, the LAC will morph, from an essentially peaceful, albeit disputed, frontier into one more ‘no war, no peace’ zone for India.

Even General Bipin Rawat as army chief, till end 2019, had warned the country to be prepared for a simultaneous ‘two-front’ war against China and Pakistan, but had seemingly neither initiated measures to thwart such an outcome nor prepare for it. At a seminar at the Centre for Land Warfare Studies (CLAWS) in Delhi in September 2017, he declared that despite all three countries possessing nuclear arms, “warfare lies within the realm of reality” along India’s northern and western borders with China and Pakistan.

Speaking a few days after the 73-day standoff between the Indian Srmy and the PLA ended in the Doklam/Dong Lang tri-junction area on the Bhutanese border, General Rawat stated that China had already started ‘flexing its muscles’ by trying to ‘nibble away’ at Indian territory in a ‘gradual manner’ to test its threshold limits. He stated that China was a country India had to be “wary about, and remain prepared for situations that could develop into conflicts”. The former army chief also said that India did not “see any scope for reconciliation with Pakistan as its military, polity and people have decided that India wants to break their country into pieces”. Consequently, Pakistan could “swing into action to take advantage of India’s preoccupation with China” he stated further, highlighting the two-front war situation but not offering either solution or remedy.

General Rawat further stipulated that it was a ‘myth’ to assume that nuclear-armed neighbours like India on one side and Pakistan and China on the other do not go to war. “Credible (nuclear) deterrence does not take away the threat of (conventional) war,” he incredulously stated, adding that in our (Indian) context, “that may also not be true”. He also emphasised the “supremacy and primacy” of the Indian Army over the two other services in fighting wars. “Wars will be fought on land, and therefore the primacy of the army must be maintained over the air force and navy,” the former army chief had added.

Meanwhile, the evolving situation along the LAC will also test the machismo that successive Indian military chiefs have periodically displayed over the past 15 years with regard to fighting a possible ‘two-front’ war. Many of them had publicly displayed bravado in reiterating the Indian military’s ability – particularly the army – in ably executing a dual conflict, if it emerged.

“But now that such a possibility has arisen, it has resulted in a panicky military effecting emergency materiel purchases and looking to other countries like Australia, Japan, Israel and the US for backup and assistance,” said a former three-star army officer.

In retrospect, he said, India’s military had erroneously placed undue confidence in the misshapen belief that the LAC situation, ostensibly managed for decades by successive prime ministers, diplomats and national security officials, posed it no military threat. Like Prime Minister Narendra Modi’s BJP government, he added Beijing had effectively coaxed its predecessors into believing that advancing bilateral commercial, economic, political and diplomatic ties took precedence over resolving the LAC.

Consequently, the Indian Army had focused pointedly on vindicating five bilateral pacts agreed between India and Beijing between 1993 and 2013 that were aimed at sustaining peace and tranquillity along the LAC, all of which had evaporated at the PLA’s instance. Accordingly, all LAC transgressions by the PLA were conveniently explained away repeatedly by Delhi – including the army – as contraventions stemming from an un-demarcated frontier, as intrinsically India was wary of opening up a second war front.

At the same time, the military continued to stress masculinity by episodically harping on its ability to implement a twin-front war scenario, possibly because it sounded grand to their political bosses. However, now that this possibility is swiftly – and adversely – unfolding in this direction, the country’s military and defence establishment appears somewhat overwhelmed.