In a Week of Riots, Two Women Officers Keep the Peace in Jammu

"Everyone would remember that I took a step back when it was most needed. It is on days like these when a woman must prove herself twice as much as men."

Jammu City: In a turbulent week in the district of Jammu, two woman officers stepped up to ensure law and order. Sunniya Ashkoor Wani, Deputy SP of Gandhi Nagar and Sheema Qasba, the former DSP of Bakshi Nagar – one from Jammu and the other from the Kashmir Valley – made sure their localities were untouched by the wave of violence that swept over large parts of the region.

Jammu’s atmosphere had grown volatile even before the Pulwama attack on February 14. On February 11, an unprecedented instance of stone-pelting was reported outside GGM Science College, where some travellers from the Valley had been stranded because of the closure of the Jammu-Srinagar Highway. A confrontation occurred between the travellers – who allegedly called out ‘anti-national slogans’ – and students, who allegedly began pelting stones at them.

Qasba arrived at the spot in time to disperse the students and keep the situation from escalating into a riot. She ensured that the passengers were moved along, and stayed near the campus for the entire following day.

Tensions remained high around the campus, however, and protests broke out again against unnamed ‘anti-national elements’ who ‘threatened to destroy the peace in the city’. Both Wani and Qasba supervised the crowds in their respective areas, and the protests peacefully ended. 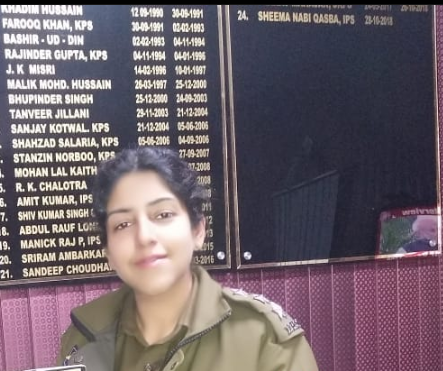 The news about the Pulwama attack on February 14 brought huge crowds to the streets, and incidents of arson, vandalism and stone-pelting took place across the city. Wani described the night of February 15 after a curfew had been imposed.

“There was a crowd of people on the road late at night, and all of them were drunk,” she told The Wire. “I stood before them and told them that they will not vandalise any cars. It’s about establishing authority. Being a woman can also give you an edge. If I had been a man, they would have pushed him around. But they saw I was a lady police officer, and none of them touched me.”

The areas under her jurisdiction include three police stations: Gandhi Nagar, Satwari and Gangyal. The Belicharana neighbourhood is Muslim-dominated but there are barely 20 Muslim families in the rest. Even so, these areas remained peaceful through the days of peak tension and provocations.

Working on a strict schedule of marching out at 5 am and patrolling volatile neighbourhoods – especially near religious places – Wani chose duty over personal health.

“I was taking medicines and I had just one thought: Duty comes before everything else. I could have excused myself. One cannot postpone one’s menstrual cycle but I would never be able to live that down then. Everyone would remember that I took a step back when it was most needed. It is on days like these when a woman must prove herself twice as much as men.”

“It is not like situations didn’t arise,” she said. “We had to make some preventive arrests to avoid any incidents. And even during the curfew, people were coming out of their homes, saying that they want to protest peacefully. They were not aware of Section 144. I had to tell them that under this section, during curfew, people cannot gather, move together or even sit together.”

Wani, the daughter of a police officer who specialised in counter-insurgency, said she had never before seen a situation like this in Jammu. Through the 29 years of her life, she had believed that “Jammu people would never do something like this. It is the fault of some miscreants who ruin the name of an entire community.”

Functioning on a total of ten hours of sleep over four days, Wani made her office her home. Her face smudged with the smoke of burning tyres, she patrolled the roads through the day to keep the peace.

While Wani was supervising her areas, Qasba – the first female Kashmiri Muslim IPS officer to get the J&K cadre – handled mobs while also overseeing the safety of residents from the Valley.

Qasba was seen on-duty through the day of February 15 when the stone-pelting began near the hostel of GGM Science College. She is in charge of Bakshi Nagar, but was present in Janipur as well, to disperse stone-pelters near the quarters where government ‘Durbar’ employees from Kashmir were living.

When The Wire reached out to Qasba, she had little to say: “I was just doing my duty, and that goes beyond seeing people as belonging to my community or not. When I wear the uniform, I am an officer and I will do what is required.”

She has been transferred recently within three months of her posting as DSP Bakshi Nagar.