The most versatile, resourceful and strategic-minded of India’s three forces still faces a protracted battle over IAC-2, the projected companion for its first indigenously built aircraft carrier. Delayed by some six years and beset by a six-fold price overrun – from its original 2003 project sanction of Rs 3,216 crore to Rs 20,000 crores at present – the 40,000 tonne, short take-off barrier arrested recovery carrier has emerged as the crown jewel of Indian naval shipbuilding. It also makes India the world’s ninth country after Britain, China, France, Italy, Japan, Russia, Spain and the US to indigenously design, build and integrate an aircraft carrier.

However, Vikrant’s projected commissioning in August 2022 is likely to occur without its Aviation Facility Complex (AFC), as this will be supplied by Russia’s Nevskoe Design Bureau only by the end of next year. Similar to the one that manages the air group of INS Vikramaditya (ex-Admiral Gorshkov), the Navy’s 44,750 tonne sole operational refurbished Kiev-class Russian carrier, the AFC’s delivery stands delayed by two to three years.

Once in service, the carrier’s deck layout will enable it to operate a high sortie generation rate, as Vikrant features dual runways capable of launching two aircraft in quick succession. However, it can only recover one fighter at a time, using its three-wire arrestor-gear. Designed by the Directorate of Naval Design, headquartered in a nondescript bungalow in New Delhi’s Kailash Colony, Project 71 IAC-1 was executed by Cochin Shipyard Limited. It involved some 50 local companies and manufacturers, confirming yet again the Indian Navy’s lead over the two other services in indigenising its requirements. At present, the Indian Navy is locally building nearly 50 assorted warships, including diesel-electric submarines, survey vessels and even nuclear-powered ballistic missile submarines and nuclear-power attack submarines, at private and state-owned shipyards.

The Ministry of Defence claims that 75% of material and equipment used in Vikrant – like 23,000 tonnes of steel, 2,500km of electrical cables and 150km of specialised pipes – had been domestically sourced. Other locally provided equipment included rigid hull boats, air conditioning and refrigeration plants, anchor capstans, galley and communication equipment and the platforms combat network systems, among other assorted kit.

Industry sources told The Wire that around 50% of the carrier’s ‘move’ content (propulsion) was imported, as was 70% of the ‘fight’ (weapons and fighter air and rotary-wing group). However, 90% of the ‘float’ component, that comprises the hull and overall structure was indigenously provided, confirming Indian industry’s – and the Navy’s – burgeoning skills in shipbuilding.

Also read: From Procuring Drone Protection to Other Weapons, Indian Navy is Ahead of Other Services

Private defence contractors Larsen & Toubro or L&T, for instance, had built Vikrant ‘s main switchboard, steering gear, and watertight hatches, Kirloskar Group its air conditioning and refrigeration, Best & Crompton its pumps, and Nicco Engineering supplied the entire cabling length of some 2,500 km. Additionally, the carrier’s Integrated Platform Management System was designed by the state-owned Bharat Heavy Electricals and installed by Italy’s Avio, that specialises in electronic control and automation systems. Gearboxes developed jointly by Elecon Engineering – a private company based in Gujarat – and Germany’s Renk AG have also been incorporated into the carrier.

Over the  years, Project 71 also featured input from overseas shipbuilders like France’s DCNS/Naval Group in the 1990s, tasked principally with auditing Cochin Shipyard Limited’s shipbuilding capabilities and Italy’s Finacantieri, to oversee Vikrant ‘s design and propulsion system integration in a US$ 30-40 million contract agreed in mid-2004. Although the technical segment of this arrangement has been completed, Fincantieri’s association with Vikrant will continue through its sea trials to its commissioning, according to Navy sources. Spain’s Navantia is also believed to have been marginally involved in providing design expertise related to the platforms air group integration.

According to Indian Navy sources, Cochin Shipyard Ltd employed the modular integrated hull outfit and painting technique in constructing Vikrant that included building about 874 compartment blocks, each averaging 250 tons, to incorporate most of the heavy machinery. This included four General Electric LM-2500 gas turbines that collectively generate 80 MW of power (120,000 hp), which would be adequate to push the carrier up to speeds of about 28 kt or 52km/hour. Vikrant’s operational range is set to be in the region of some 7,500 nautical miles or 13,890 km. But IAC-1’s journey was not without financial and technological hiccups. In the lead up to laying its keel in early 2009 and for several years thereafter, Project 71 continually pushed back deadlines and gamely battled severe media and parliamentary defence committee criticism.

Some of these setbacks were perpetuated by Cochin Shipyard Ltd not receiving drawings from the under-staffed DND on time, others by bureaucratic delays and archaic procedures in clinching tenders for importing varied equipment. A shortage of specialist welders and other marine technicians too posed hurdles, as did a simple road accident in 2014 involving the truck transporting the carrier’s generators from Pune.

One of the initial impediments, however, centred on sourcing AB/A steel, after efforts to import it from Russia were abandoned in 2004-05. To overcome this, the Defence Research and Development Organisation’s (DRDO’s) Defence Metallurgical Research Laboratory in Hyderabad and the public sector Steel Authority of India or SAIL jointly developed three types of steel for the carrier, ultimately supplying more than 27,000 tons of it to Cochin Shipyard Limited to build Vikrant. Varying in thickness from 3 mm to 70 mm this steel has been used for Vikrant ‘s hull and frame and the more resilient type for the flight deck. A toughened version is also installed on the floor of compartments housing heavy equipment such as engines and generators.

Detailing other aspects of Vikrant’s construction are obviated by space constraints. But its commissioning has triggered speculation over a follow-on third carrier, which the Indian Navy has been demanding for several years to project power in the Indian Ocean Region to contain China, which is making swift inroads into the area. Both China and India have positioned carriers at the centre of their maritime force development plans, using elements of Russian technologies; but each has launched itself from a different base level of experience and adapted its individual path to the capability in which it has the upper hand.

However, in May 2015 the MoD sanctioned Rs 30 crores to the DND to begin conceptualising plans for a 65,000 tonne IAC-2 ‘Vikrant’-class carrier with a Catapult Assisted Take-Off But Arrested Recovery (CATOBAR) system to launch its fighters, but nothing significant has emerged thereafter.

“As a navy we are absolutely clear [about] the utility of a third carrier,” the Navy Chief of Staff Admiral Karambir Singh had categorically stated last year, echoing the sentiments of his predecessors, many of whom accused successive government of ‘sea blindness’ in this regard.

Air power at sea is required ‘here and now’, Admiral Singh had stated, adding that as a putative $5 trillion economy, India needed a navy with reach and sustenance to protect its expanding strategic interests. 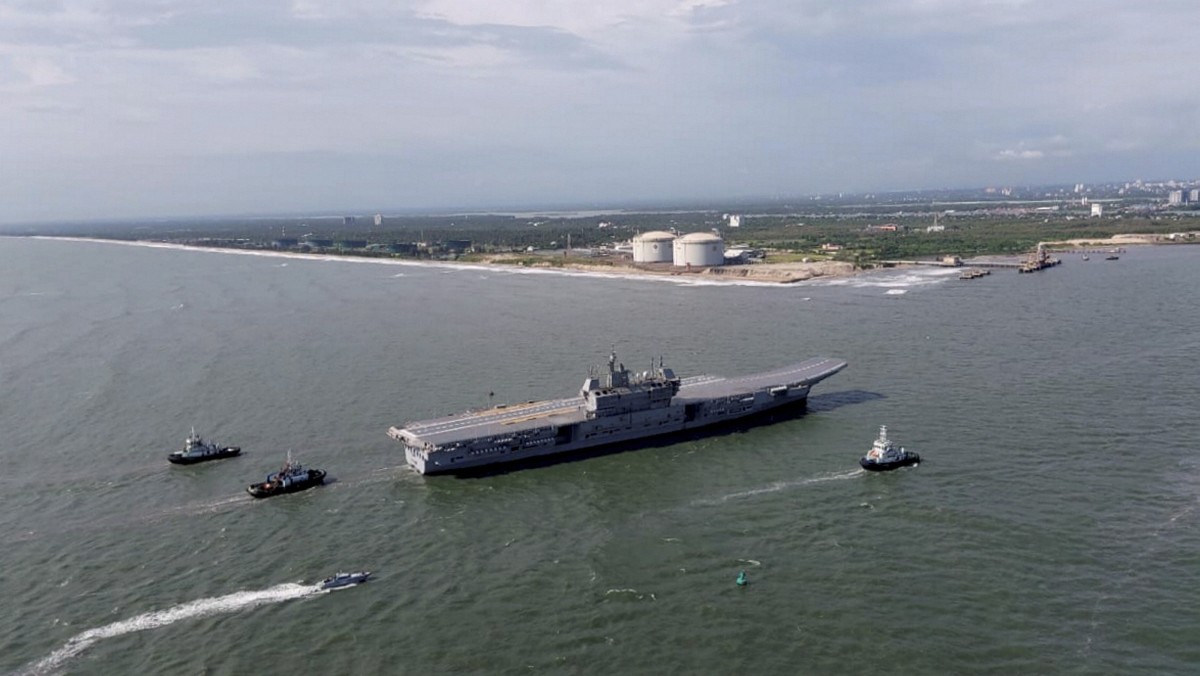 Over the years, the debate over IAC-2 has been plagued, not only by its astronomical cost, but also its overall operational efficacy in an environment of burgeoning anti-access/area denial (A2/AD) capability via long range ballistic and cruise missiles. Steadily declining domestic military budgets and vacillation by the MoD in approving the programme have also collectively thwarted the carrier project.

Many Indian Navy officers argued that if the IAC-2 was ditched, it would dissipate the technical capability and expertise India had acquired in building carriers, comparing it to the ‘lost decade’ in submarine building expertise by Mazagaon Dock Shipbuilders Limited (MDL) between 1995 and 2005. This related to MDL’s submarine construction facilities remaining idle and ultimately disintegrating after its specialised workforce retired or took up alternative employment following a corruption scandal involving the import of German HDW Type 209/1500 diesel-electric submarines, that ultimately remained unresolved.

Nonetheless, even within the Navy, senior officers question the monetary logic of building a new carrier at the cost of inducting additional submarines – whose numbers had depleted to 15 – 13 of which were between 19 and 33 years old and nearing retirement. These numbers were nine boats less than the 24 submarines that the Navy was projected to operate by 2030, in accordance with its Maritime Capability Perspective Plan. Correspondingly, equally critical surface combatants like corvettes, mine-sweepers, destroyers and frigates were in short supply, as were naval utility helicopters and unmanned aerial vehicles and other assorted missiles and ordnance.

These officers’ reasoning centred on the unresolved debate in other navies around the world between operationally pursuing a ‘sea denial’ strategy, largely by deploying submarines, or alternately seeking a ‘sea control’ approach, via costly and relatively more vulnerable carrier battle groups (CBGs) that entail an inordinately large number of surface and underwater escorts.

The Indian Navy’s Doctrine, however, opts for CBGs on the grounds that these comprise the most ‘substantial’ instruments in securing this latter aim, as these assets possess ‘ordnance delivery capability of a high order’ to assist the Navy in prevailing over the enemy’s ‘Centre of Gravity’ by degrading his Decisive Points.

Meanwhile, at another, higher level the Indian Navy faces conceptual hurdles in its future carrier plans. The Chief of Defence Staff General Bipin Rawat, responsible for prioritising platform and materiel acquisitions, for his part is broadly opposed to the Navy acquiring a carrier. On at least two  occasions last year he had stated that the Navy needed ‘more submarines than carriers, which themselves require their own individual armadas for protection.

The other principal opponent to financing a carrier for the Indian Navy remains the Indian Air Force (IAF) that too is competing for a greater share of depreciating annual defence budgets, as it grapples to make good its fighter, helicopter and transport aircraft shortages, amongst other essential equipment. But that as they say, is another story.

Hence the Indian Navy, possibly the most versatile, resourceful and strategic-minded of India’s three forces faces a protracted battle for IAC-2, as it readies to operationally commission Vikrant imminently into service.