How the Indian Navy's Ensign Evolved Over the Years

As the Indian Navy gets a new ensign today, a look back at the existing flag's colonial heritage and the British traditions which remain with the services.

Indian Navy's new ensign is seen in the background, at the launch of the carrier INS Vikrant. Photo: PTI

New Delhi: For the second time in two decades, the Indian Navy (IN) has a new ensign or flag that disassociates itself from its colonial Royal Navy (RN) precursor. The unveiling of this ensign took place alongside the commissioning of the indigenous aircraft carrier-1 (IAC-1) as ‘INS Vikrant’ at Kochi on Friday

The vertical red stripe, denoting the Cross of St George against a white background, has been replaced by the Navy’s emblem and motto. 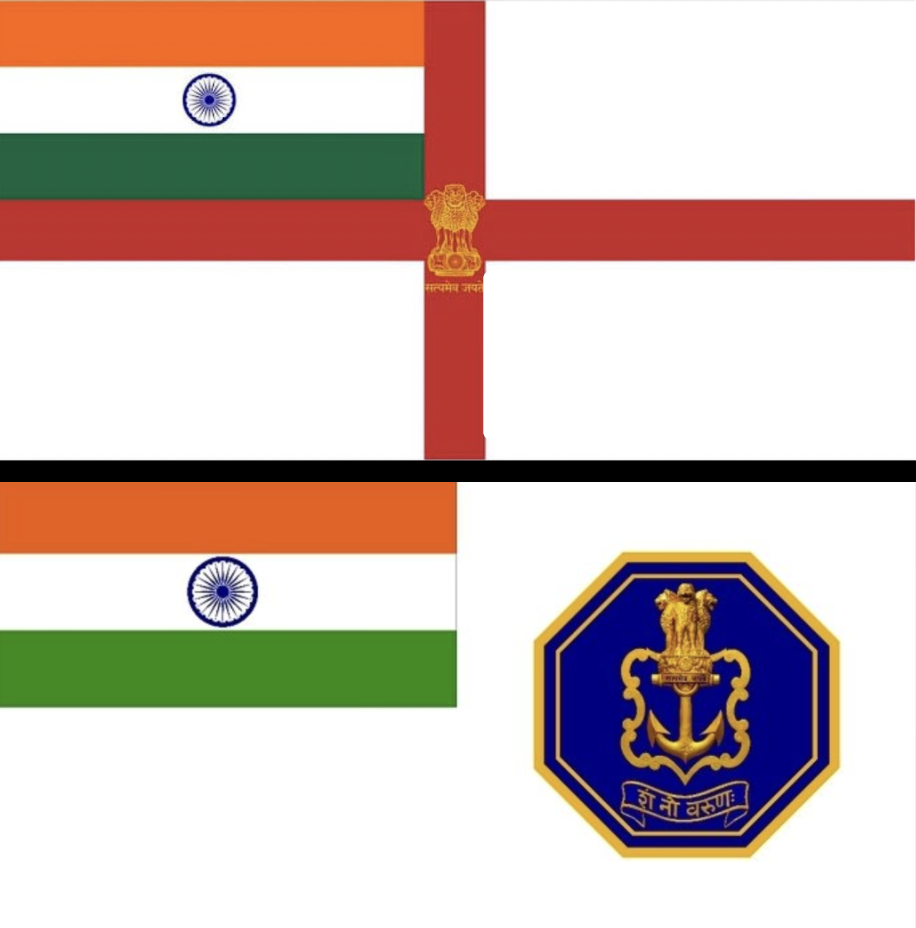 Above, the old ensign. Below, the new design unveiled today.

India’s tri-colour that nestled earlier inside the Cross’s top left quadrant and the Ashoka Lion insignia have been retained, with an anchor added. In this respect it is similar to the 2001 ensign that was adopted only to be dropped after three years: 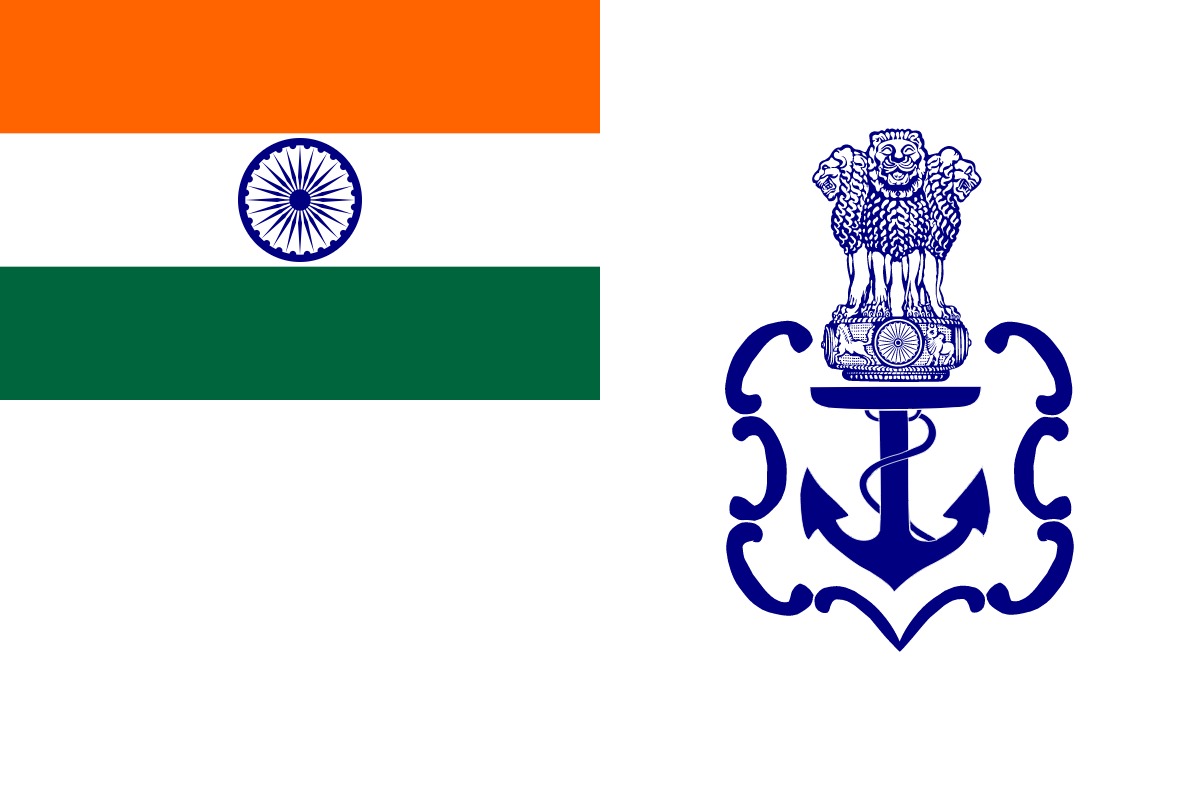 The blue and gold octagon that has been added now is supposed to have been inspired by Shivaji’s seal.

Also read: An Ode to the ‘Sandook’: India’s Ubiquitous Piece of Luggage

The St George’s Cross, named after a crusading Christian martyr who is Britain’s patron saint, was adopted as England’s – as opposed to the United Kingdom’s – flag in the 12th century, before becoming the RN ensign in 1707. Thereafter, the ensign transferred to Her Majesty’s Navy in India in 1858, and subsequently to its successor, the Royal Indian Navy, in 1934.

This same ensign, dominated by the Cross, continued in use with the renamed Indian Navy after Independence for three years, till it was changed in 1950 with additions to it, like the tri-colour and the country’s Ashoka lion emblem.

However, on August 15, 2001, Prime Minister Atal Bihari Vajpayee’s Bharatiya Janata Party (BJP)-led coalition government changed this ensign to divest it of its colonial past, substituting the George’s Cross with the IN’s crest that prominently features an Ashoka Lion atop an elaborate anchor at its centre. The tri-colour remained in its original spot.

Alongside the ensign change occurred another interesting development which, at the time, lent itself somewhat wickedly and irreverently to double entendre with regard to senior naval officers, in addition to exciting much cheeky mirth inside and outside the force. This involved the W-shaped pennants of the respective flag officers that identified their ranks when they travelled in their individual vehicles.

For, till the 2001 ensign change, in keeping with inherited naval tradition, two balls adorned all Rear-Admirals’ blue-coloured pennants; one ball identified Vice Admirals’; while no balls denoted the naval Chief of Staff. From then on, the pennant balls were dispensed with, replaced prosaically with stars: four for the IN chief, three for vice-admirals, two for rear admirals and one for naval commodores – all nestling at the top end of the IN crest.

But three years later, in 2004, the naval ensign reverted to its original design with the George Cross, following complaints that its blue colour was indistinguishable from that of the sky and the ocean. The only difference was that the Ashoka Lion emblem was inserted into the centre of the Cross, but the tri-colour continued where it had always lain. 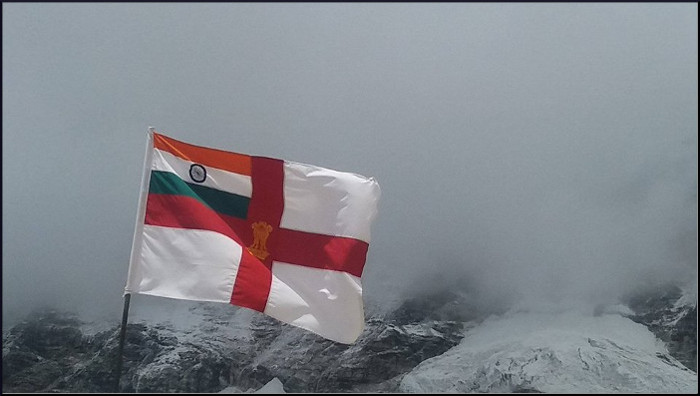 An unintended but fortuitous consequence of this change was that the flag officer’s balls on their pennants were restored, but unfortunately, not for the IN chief who, once again, ended up having none on his pennon. Official sources earlier indicated that with the new ensign, these pennants, too, will undergo modification, with flag officer’s balls almost certain to be done away with once again.

Meanwhile, over 75 years after Independence, India continued to perpetuate colonial traditions in the military. Veterans proudly conceded that the IN was an extension of the RN, not only in operational, logistic and doctrinal procedures, but also in its overall maritime traditions, outlook and superstitions.

”The basic foundations of the IN remain British in origin,” said a two-star officer, declining to be named. “Hence, the overriding ambience in the service continues to be influenced by the RN, despite numerous operational changes over decades.”

Others said RN officers visiting IN ships often found the atmosphere ”quaintly” English, right down to the drinks, cocktails and fare served in the ships wardrooms, that often included roast mutton, papadums and sweet mango chutney.

Several Indian Army regiments, dating back to the 17th and 18th century periods of the East India Company, too, retained a colonial flavour, especially with regard to their colourful dress uniforms and mess traditions. This is particularly true of the resplendent dress of the President’s Body Guard, the ceremonial unit raised for VIP duty in 1773 by Governor General Warren Hastings.

Many army messes continue to be decorated with silver artefacts fashioned by renowned English silversmiths, while their prevailing dress code, multitude of ceremonial uniforms and decorum were a ‘throwback’ to the ‘Koi hai’ British era. The Defence Services Staff College, for example, located in the picturesque Niligri hills, reminiscent of the English Downs and named after the Duke of Wellington, had an eight-month ‘hunting season’ that ended with a grand ball at the beginning of summer.

Military kennels imported hounds from England for the hunt, for which all officers observed a strict sartorial and culinary code. Till recently, they even duplicated English fox-hunting mores that included quaffing wine or champagne on horseback before the hunt, and throwing their drinking glasses over their shoulders before cantering out to the hunt master’s bugle.

Adding to such archaism were some 10 Hunt Committee members, splendid in their knee-length scarlet coats with green collars, the formal dress that was instituted in 1907 by a British army officer and observed ever since for the occasion. The remaining riders wore blue blazers over white breeches and the mandatory green-coloured Ooty Hunt Club tie.

Established in 1835 by members of the 74th Highland Regiment, the Ooty Hunt initially hunted Sambur deer, wild boar and the odd tiger. Till 1977, the Club hunted mainly jackal-fox, which are not found in the area, but after this was banned, they now just ride to the hounds over the Ooty Downs.

Similar colonial traditions are prevalent in the Pakistani and Bangladeshi militaries, which shared a common culture with the British-Indian armed forces until Independence. Many former elite British regiments, like Probyn’s Horse and the Guides Cavalry, that transferred to Pakistan in 1947, were even more English in their orientation than their Indian counterparts.

Dozens of Indian, Pakistan and Bangladeshi army bands still wear kilts and play English marching tunes on bagpipes with gusto as part of their repertoire. Surprisingly, hundreds of bagpipes were exported annually from Sialkot in Pakistan’s eastern Punjab province to Britain and other western countries.

Note: This article has been updated with details on the new ensign.