The late chief of defence staff undermined the Army’s ethos and traditions by opening the door to right-wing social media, Hindu rituals and cult worship of the leader. 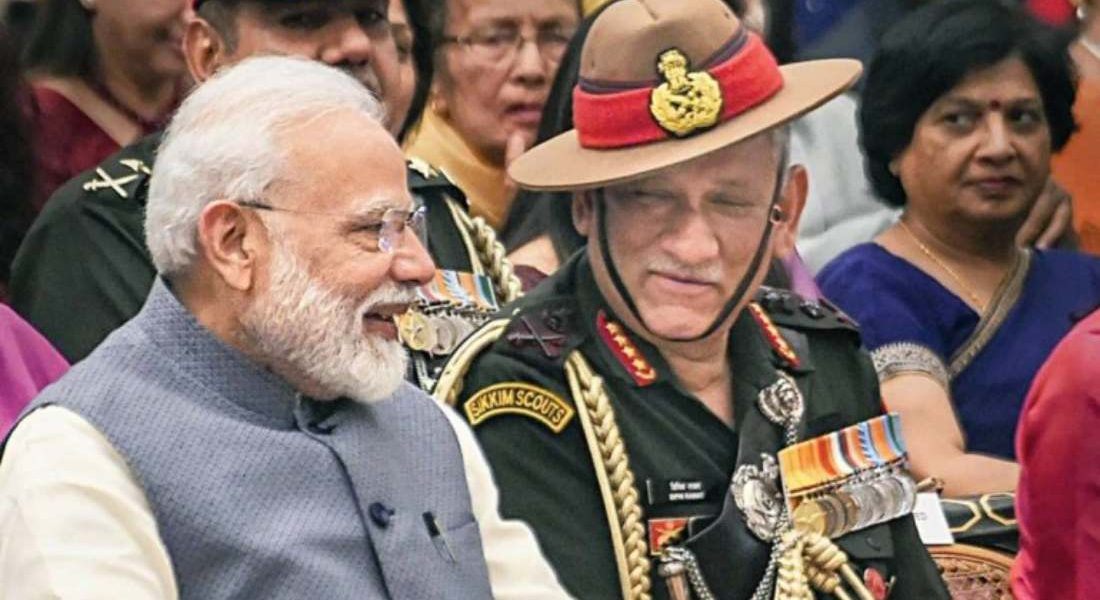 Politicisation of the Indian Army is no more a matter of dispute. The debate now is more on the desirability or otherwise of some amount of politicisation. The issue was triggered by the late chief of defence staff Bipin Rawat’s political activism. Commentators, including two outstanding columnists, have expressed concern over political indulgence by the serving army top brass. This, they warned, will erode the integrity of the army as an instrument of the state.

On the other hand, defenders of the official position, including a former air vice marshal still working with the establishment, argue that politicisation is a sign of a ‘maturing’ democracy and this constitutional right could not be denied to servicemen. The problem with the whole Rawat debate has been that it is like writing a review without reading the script. Rawat, in fact, has been just a part player in the larger saffronisation project.

This has been an ongoing project in which sections of senior- and middle-level brass were willing partners. This explains why a large number of service personnel take to saffron politics soon after their retirement. Many of them become Bharatiya Janata Party candidates. Remember, the 1.2 million army also serves as a massive vote bank.

Former CRPF additional director general Sanjiv Krishan Sood sheds much light on systematic efforts at this ongoing penetration and saffronisation. “A few years ago,” he says, “I was invited to speak at an event organised by an affiliate of the Rashtriya Swayamsevak Sangh. The outfit claimed to work for the welfare of the border population. Many senior retired military officers as well as a few young serving Army officers were part of the audience. I was surprised to see the serving officers were in uniform. The others present included personnel from the police, banks and other civil departments.”

Soon, he said he realised the communal nature of the outfit. The participants questioned the patriotism of minorities and people of the Northeast. He then decided to sever his association.

Also read: What Will Be General Bipin Rawat’s Place in India’s Military History?

So far, strict rules, a deep secular tradition and ethos, and top-level oversight had acted as a deterrent to the saffronisation process. After the Modi takeover, things began changing. With the support of the political leadership and army brass, the old RSS project got a fillip under army chief General Bipin Rawat. His tenure marked the abandoning of the Indian Army’s well-honoured secular traditions, values and mores.

Rawat quietly allowed, and perhaps encouraged, circulation of right-wing social media propaganda in the barracks. The result was a deluge of divisive propaganda material followed by gossip and comments among the officers and soldiers. This often led to heated discussions and arguments. Identifying individuals on the basis of their political affiliation is not good for the forces’ integrity.

The second change has been a surge of faith-based prayers, including pujas and bhajans, within units. The earlier practice has been to conduct prayers at the designated places (sarvadharma sthal) by individuals.

“Few will admit, but this trend is permeating into the rank and file of the country’s most secular organisation. At this rate it is likely to make an adverse impact on the performance of caste/region-based units, in the event of a crisis like Punjab that saw mutinies in the Army,” says military writer Major General (retired) Yash Mor.

In the long run, he fears, this could harm the integrity of the forces. To perform the ritual of just one religion with the exception of others is certainly discriminatory, and is likely to create divisions. This is also contrary to rules, regulations and military law.

Now, defence minister Rajnath Singh himself flouts golden rules and goes round performing Hindu rituals under full media glare on all available occasions. While visiting army formations in the Northeast, he performed Shastrpuja on Dussehra. Modi who went to Ladakh ‘to inspire and motivate’ the troops, demonstrably performed puja on the Indus river. 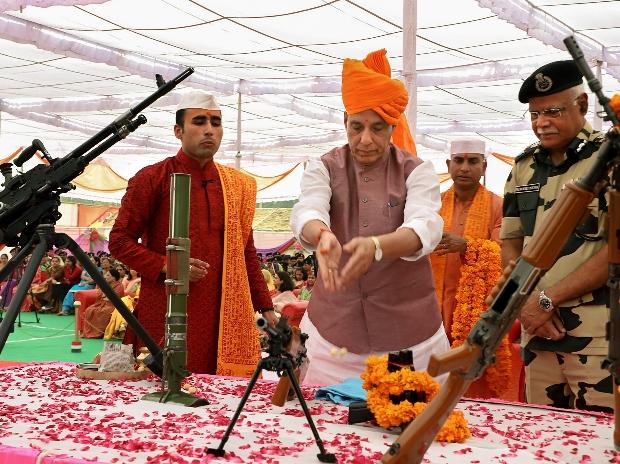 During a two-day visit to Ladakh, Rajnath decided to visit Amaranth cave and kept the entire hierarchy in uniform waiting in attention ‘with folded hands’. He himself led the puja during his visit to France to mark the delivery of Rafale fighter jets.

All this gives the wrong message to the ranks. Now rites with strong religious connotations are happening at different units in different forms. Look at the way Headquarters 15 Corps, responsible for operations in the Kashmir Valley, conducted an aarti for the prime minister’s welfare on his 71st birthday on September 17 last year. It was done under the parade commander, complete with dhoop and a big ‘Om’ prominently displayed in the background. All this happened at the Corp’s Drill Square.

Lt General Panag says, “This unauthorised practice is contrary to the rules and regulations of the Army, and the policy issued by the Adjutant General’s Branch wherein all religious ceremonies are restricted to authorised religious places (Dharmasthal) with the exception of the attestation parade.”

The overdrive by 15 Corps also highlights the growing culture of political sycophancy among the top brass. To make it worse, for instance, the unit under its Twitter handle — Chinar Corps — did something unusual for the Army. They tweeted to felicitate Modi on his 71st birthday.

The laudatory language, complete with three images of the prime minister in military combat dress, was no different from the kind of servility and sycophancy that political henchmen show to the netas. The tweet was deleted after sharp criticism on social media. This screenshot has certainly dented the apolitical reputation of the armed forces.

Modi has been adept at mixing the military with politics and religion. Incidents like Balakot bombing and surgical strikes, which otherwise may go unpublicised, have been repeatedly used to make political gain in elections. His admirers also try to identify him with every successful operation by the defence forces. Yogi Adityanath now hails the Indian Army as “Modi ki sena (Modi’s army)“.

Also read: The Troubled Legacy of General Rawat Needs to Be Rolled Back

Such aberrations can happen only with the support of the top brass and their political leadership. Thus the entire Rawat phenomenon has been a product of this project. Lt General Prakash Menon narrates how appointment norms were tinkered with to put in place loyal incumbents at crucial positions. In the period between 2014 and 2020, supersession for appointments of CNS, COAS and CAS happened. This led to military leaders, especially those seeking appointment as chiefs, seeking political patronage.

For instance, eligibility for the CDS post has been shaped in such a way as to give the political leadership choice to select the loyal ones from a fairly wide range of choices in two domains – serving and retired. Lt General Menon attributes the delay in finding a new CDS to the political leadership’s ‘deep search’ for the right person.

And the former CDS had all the right attributes. His advent heralded institutionalisation and politicisation of the position. He was on the right side of the political leadership and understood its predilections. He met Mohan Bhagwat at Nagpur in uniform and defended his action. He spoke the language of the netas.

He often behaved as if he was part of the political establishment and invited controversies. In February 2018, he told a Guwahati seminar that the Badruddin Ajmal-led All India United Democratic Front, a minority rights party, had grown in the Northeast much faster than the BJP. He followed it up by his political assertion about the ‘planned Bangladeshi influx’ into the Northeast.

While he was preparing to retire as army chief, Rawat made the right noises against the anti-Citizenship (Amendment) Act protests that had erupted across the country. He sent a thinly veiled missive to the Congress, saying political leaders “should not lead masses to arson and violence”. This led to a volley of protests by opposition leaders, including P. Chidambaram, who shot back, “Political leaders will do what political parties have to do; let General Rawat not tell us what to do just as we do not tell generals how to fight a war.”  And soon Rawat was made the CDS.

Throughout his tenure, he was particularly belligerent on Kashmiri civilians. On one occasion, he said: “In fact, I wish these people, instead of throwing stones at us, were firing weapons at us. Then I would have been happy. Then I could do what I (wanted to do).” In April 2017, Rawat again courted controversy when he defended Major Leetul Gogoi for tying Farooq Ahmed Dar, a young Kashmiri craftsman, to his jeep’s bonnet. Making him a human shield invited wide condemnation. However, the Army later formally commended Gogoi for his rights violation. For the political leadership, all such imperatives will have to be factored in while spotting the new CDS.

Note: In an earlier version, General Panag’s rank was incorrectly stated as Major General. He is, in fact, a (retired) Lieutenant General.