From Troop to Poop, Difficult Terrain Brings Its Own Challenge for Army, and Officer

Men in uniform must answer the call of nature, whether they are in the deserts of Rajasthan or the icy heights of Ladakh and Siachen. 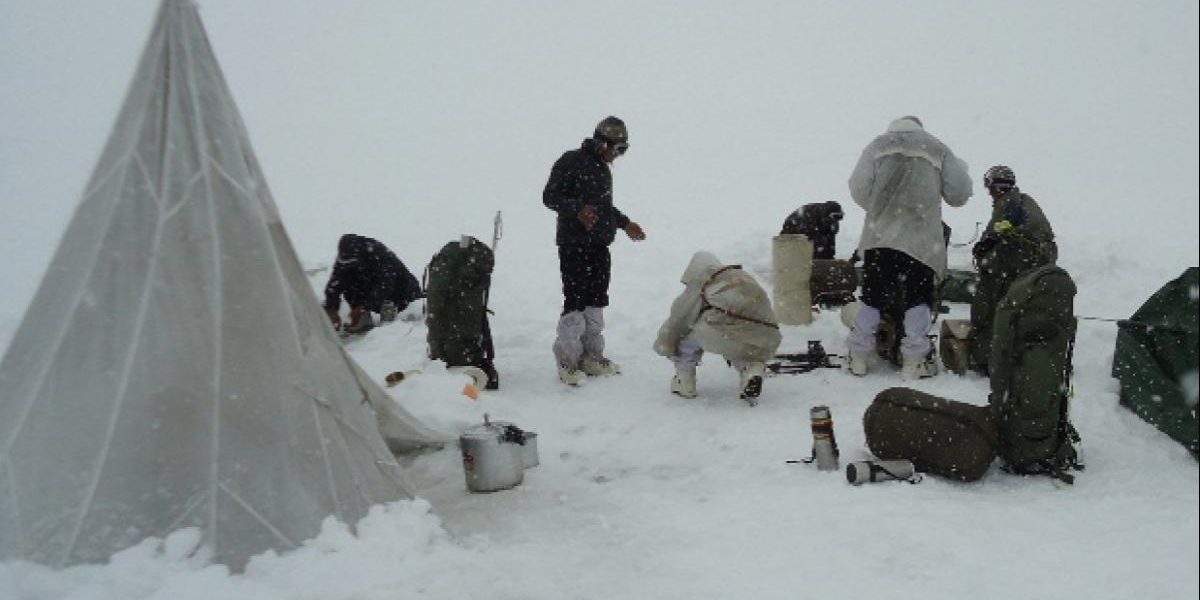 Chandigarh: Over centuries, defecation has posed a trial, if not a persistent challenge, for operationally deployed armies.

Such essential but rarely talked about activity invariably elicits embarrassing reactions even in macho soldierly circles, possibly because pooping is a decidedly private endeavour that renders each one of us highly vulnerable.

But the sheer helplessness it manifests amongst crouching or squatting soldiers  – their trousers bunched up around the ankles as they attempt to relieve themselves in proximity to an enemy – is somehow even more pronounced.

Alternately, the subject of soldiers defecating in combat gear whilst on exercise or deployed on field manoeuvres, prompts bawdy, albeit sotto voce scatological humour.

But this response too, it seems is a dodge to cover up with braggadocio a fundamental chore most people are basically ill at ease with, and furthermore loath to discuss or even mention. In a sense, pooping is the covert or invisible part of all of our critical, though gratifying, daily routines.

Adam Linehan, a former US Army medic who deployed to Iraq and Afghanistan and went on to become a well-known journalist and film maker in Brooklyn, put it in perspective when he wisely stated that “we don’t talk about pooping enough – at least not in earnest”. He then goes on to hilariously recall how he learnt to do it squatting from an Afghan soldier, and how he taught his entire platoon to follow suit whilst on counter-insurgency operations in and around Kandahar.

While no soldier in India needs to learn how to squat, the Indian Army – possibly amongst the world’s most widely and diversely employed – has to manage the daily execution of defecations on an industrial scale for tens of thousands of its personnel in the field. And to complicate matters it has to do so in diverse environments where little or no infrastructure, leave alone, toilets exist.

Delicately put, this renders the entire exertion of pooping into a major undertaking, especially for officers in the field, who are forced to resort to extremes of jugaad or innovation to perform this most private of activities in utmost seclusion, which is often not easily possible.

There is a delicate, but rarely talked about reason behind this search for solitude by officers to poop: fear of exposure of their genitalia to jawans and even to junior colleagues. After all, it’s a universally accepted if unstated tenet that authority back in the unit would be adversely impacted if a jawan who espies his senior officer pooping reports back to his formation langar that the man in question is poorly endowed.

In all command-and-control settings, even outside the military, claims regarding inadequately hung seniors spread swiftly, often with disastrous consequences in a largely male-centric environment.

Irrespective of psychologists’ claims that size does not matter, the issue preys on the mind of males everywhere, and the army is no exception.

One former armoured corps officer said he was thankful for the old Willys Jeep, which for a generation of soldiers, was an indispensable commode-on-wheels. During desert manoeuvres in Rajasthan, he said he would invariably drive out into the sand dunes, far from his tank formation each morning in his Willys for his morning poop. He would stop the vehicle in the deserted desert, perch preciously over the gap between the fender and the engine bloc, resting one arm on the bonnet, and comfortably relieve himself in utmost privacy.

The advent of the Maruti Gypsy jeep in his later years, he lamented, had ended the comfort provided by the Willys, leaving him little choice but to squat furtively behind some sand dunes away from the prying eyes of his regimental risaldars.

High in the mountains

But pooping in the Himalayas is, without doubt the most arduous, to say the least, claim a host of veterans who have served at vertiginous heights along the line of control with Pakistan, and later at Siachen, in unbelievably freezing conditions.

After 1984, when India seized the Siachen Glacier and surrounding areas, veterans said they faced a Hobson’s choice in defecating at heights of over 17,000 feet and in temperatures that dipped to below 45 degrees Celsius during winter, and an even more formidable wind chill factor.

Till the late 1990s, when bio-digester toilets designed by the Defence Research and Development Establishment (DRDE) at Gwalior were installed at Siachen base camp, soldiers and officers alike were directed to strategically located ropes for defecating. After swiftly lowering their arctic leggings, they pooped speedily over the mountain edge into a snowy abyss, completing the entire exercise within seconds, officers said.

However, over years, with tens of thousands of soldiers defecating similarly, this led to a major environmental crisis: growing mountains of poop, as perennially low temperatures in the region do not facilitate the natural microbial decomposition of waste, which continues accumulating throughout the ice layers. Technically, and on a lighter note, the waste of the first soldiers to take a dump at Siachen in 1984 would still be in existence.

Other than being an aesthetic monstrosity, this accumulation runs the risk of getting mixed up with the snow that remains the sole supply of drinking water for the deployed brigade. And though some of these problems have been partially resolved, thousands of soldiers deployed to forward posts still face pooping hazards, for which there seems to be little or limited redress, despite advances in technology and disposal of human waste. One officer jocularly said that this heap of waste could be rolled down the hillside towards Pakistan, but this remedy remains just that: a shitty joke.

Alternately, however, the soldiers at these posts can descend a ladder down into crevices that are located a little distance from their living quarters; but even for this, agility and litheness are necessary and, no doubt a skill developed over time. But one saving grace most Siachen veterans were thankful for during their tenure on the glacier – if it can be called that – was that with loss of appetite at those forbidding heights and consequent limited intake of food, their need to defecate was considerably mitigated. Hence, so were the associated tribulations.

Similar ordeals of mass defecation are expected to surface imminently with the impending winter deployment, October onwards, of over 20,000 additional troops to the disputed line of actual control (LAC) in eastern Ladakh. With a daily consumption of hundreds of kilos of foodstuff by these soldiers, the ordeal of evacuating it at remote posts at heights of over 15,000 feet will be enormous.

This deployment is expected to stretch 250-300km along the precipitous expanse from the Depsang plains in the north to Galwan, the Hot Springs-Gogra region and Pangong Tso lake and onto Chushul, to safeguard multiple ingress points along the LAC. Virtually no infrastructure exists in this region to house these many supplementary troops in freezing conditions.

Perforce, whatever arrangements the army makes will need to incorporate defecating facilities too.

Up in the air

Fighter pilots, including those from the Indian Air Force (IAF), seem to have a somewhat temporary solution to the calls of nature by regressing to their childhood and using diapers. Whenever deployed on extended missions like flying to Europe or the US for exercises, or in the neighbourhood for extended manoeuvres, IAF pilots strap themselves in with diapers to deal with their physical urge to urinate and defecate.

In 2010, for instance, when IAF fighter pilots participated in an exercise to bomb mock targets on the Andaman and Nicobar archipelago, they were also armed with diapers. At the time senior IAF officers said they would have to get used to carrying additional loads in their diapers as future missions would be more complex, requiring pilots to remain airborne for 12 to 15 hours.

“Human endurance should not be a limiting factor in the cockpit’ then Air Chief Marshal Homi Major had sanguinely declared on that occasion.

Down in the sea

Pooping in submarines is possibly the most hazardous, as the chances of the sewage coming right back and hitting the sailor with great impact are not unknown if the toilet tank is over-pressurised hundreds of feet underwater.

It’s instructive to recall that in WWII, an advanced German hunter submarine of the U-1206-class, on its maiden combat voyage in the North Sea in April 1945, sank thanks to its poop after its captain used the boats hi-tech toilet improperly.

Ingenious German engineers had developed what they believed to be the ‘next generation in undersea plumbing’ by discharging waste directly into the sea. Eight days into its first patrol, the captain decided to try out the submarines toilet some 200 feet under water.

He accidentally turned a wrong valve, unleashing a torrent of sewage and water back into the submarine. “The situation escalated swiftly with the unpleasant liquid filling the toilet compartment and beginning to stream down onto the submarine’s giant internal batteries – located directly beneath the bathroom –which reacted chemically and began producing chlorine gas,” writes Elliot Carter in Motherboard.

As the poisonous gas filled the submarine, the captain frantically ordered the boat to the surface where it was attacked by Allied combat aircraft, giving the crew no option but to scuttle the boat.