"They beat me with sticks and kept asking whether or not I had provided information about the location of slain militants. I think later they were convinced that I was innocent."

Farooq Ahmed Thokar, who was abducted by the HM and then released.

Kulgam/Shopian: After spending four harrowing hours in the custody of Hizbul Mujahideen (HM) militants at an unidentified location, Farooq Ahmed Thokar and Shahid Ganai found themselves blindfolded, standing on what they could tell was a macadamised road somewhere in south Kashmir. They were accompanied by two militants, who had just interrogated them. Thokar and Ganai were asked to turn their backs towards the car that had been used as transportation.

“[Then] they removed our blindfolds. A voice came from behind and told us that we were free to go. One of the two militants asked us not to look back while they drive away and so we didn’t. After the car had left, I started to take stock. I realised that we were on a road in the Nagisher area,” said 30-year-old Thokar, a resident of Saidapora in the Shopian region of south Kashmir.

Thokar was among six civilians abducted by the HM last week. The militant outfit had accused the men of being an army informers. Two of them were executed, and their killings were recorded and shared on social media by the HM along with their “confessions”. The men were heard saying that they had provided the army with information about the whereabouts of militants who were later killed in encounters this year.

“I am not an army informer, just an ordinary civilian,” said Thokar in an interview to The Wire. This correspondent met with Thokar on Monday evening, when the army was in the midst of a search operation in the locality where Thokar lives along with his family.

“After what I witnessed, the last thing that I wanted was the army to visit my home and search my neighbours as well. The militants found me innocent and visits from the army can only create problems for me,”said Thokar.

“We had to ask him (Thokar) a few questions about his abduction,” said an on-duty army officer, without revealing much about what Thokar had told him. To The Wire, Thokar gave a detailed account of his life and his abduction.

“In May 2011, I lost my left arm when I was electrocuted while working as a labourer. We have small patch of land where we grow apples, but that is not sufficient to sustain me and my parents, so I continued working as a labourer despite being amputated. I also helped my father with whatever little business we get by selling apples,” Thokar said.

“I was on my way to Manjan, where I had to drop off apples to prospective buyers. I had barely left the village when a car stopped. Two men with guns asked me to get in and I did. Once inside, I was blindfolded. The next thing I know, I was being driven to an unknown location. Shahid and another boy (Huzaif Kuttay) were being questioned separately by 3-4 men in the same orchard that I was taken to. I was sat down and asked about my involvement in the recent encounters in our area. They beat me with sticks and kept asking whether or not I had provided information about the location of slain militants. I think later they were convinced that I was innocent. Shahid too was let go, but the other boy was kept back,” Thokar said.

After the army questioning, the 30-year-old was surrounded by his family and a few neighbours, all looking worried. “I am an amputee. I have neither been involved with the Mujahideen or the army. I want to be left alone,” Thokar said.

While Thokar’s family breathed a sigh of relief on seeing their eldest son return home safe and sound, in Manzgam, Kulgam, about 90 km from Srinagar, 19-year-old Huzaif Kuttay’s was trying to come to terms with his killing.

A video of baker Kuttay’s execution was released on social media by his executioners last week. His body was recovered from an orchard in Hermain village, with his throat slit.

“I have not seen the video of the execution and I don’t think I am capable of seeing it in the future,” said Kuttay’s father Mohammad Ashraf, a 50-year-old tailor. 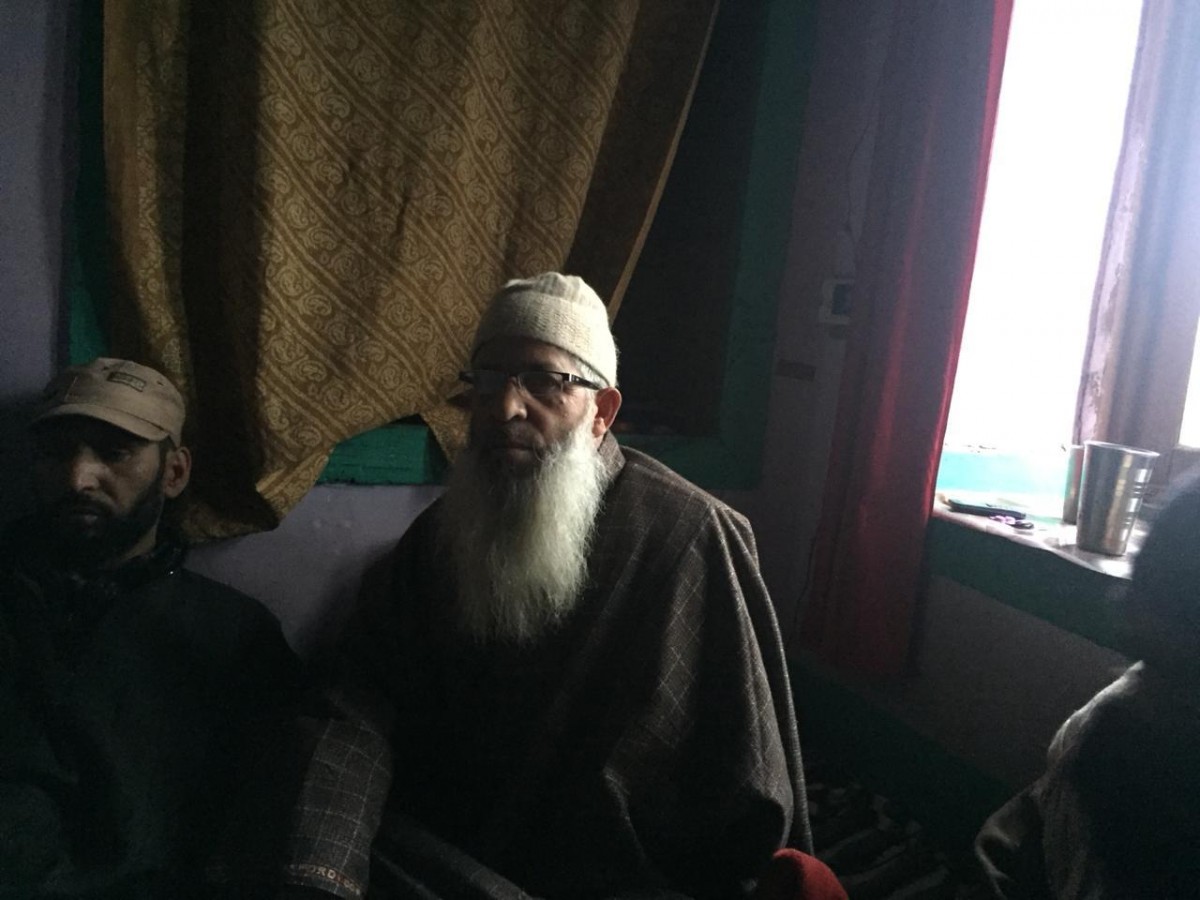 “He (Kuttay) should have been forgiven for his mistakes,” Kuttay’s sister interjected. “They (militants) could have come to us and told us about his mistakes. We would have spoken to him but instead they just killed him. Islam doesn’t permit this.”

Kuttay was the eldest of Ashraf’s four sons and the third among nine siblings, aged between nine and 24.

“He dropped out of school when he was in Class 8. Earlier this year, the family helped him set up a bakery. The shop belonged to his aunt and he had been working there for the past few six months. We didn’t ask about what he earned, although he did give me Rs 3,000 once. I thought he was saving up for the weddings of his sisters,” said Ashraf.

Neighbours and relatives flocked the Kuttay household, all of them wondering why the militants thought Kuttay deserved this brutal end. 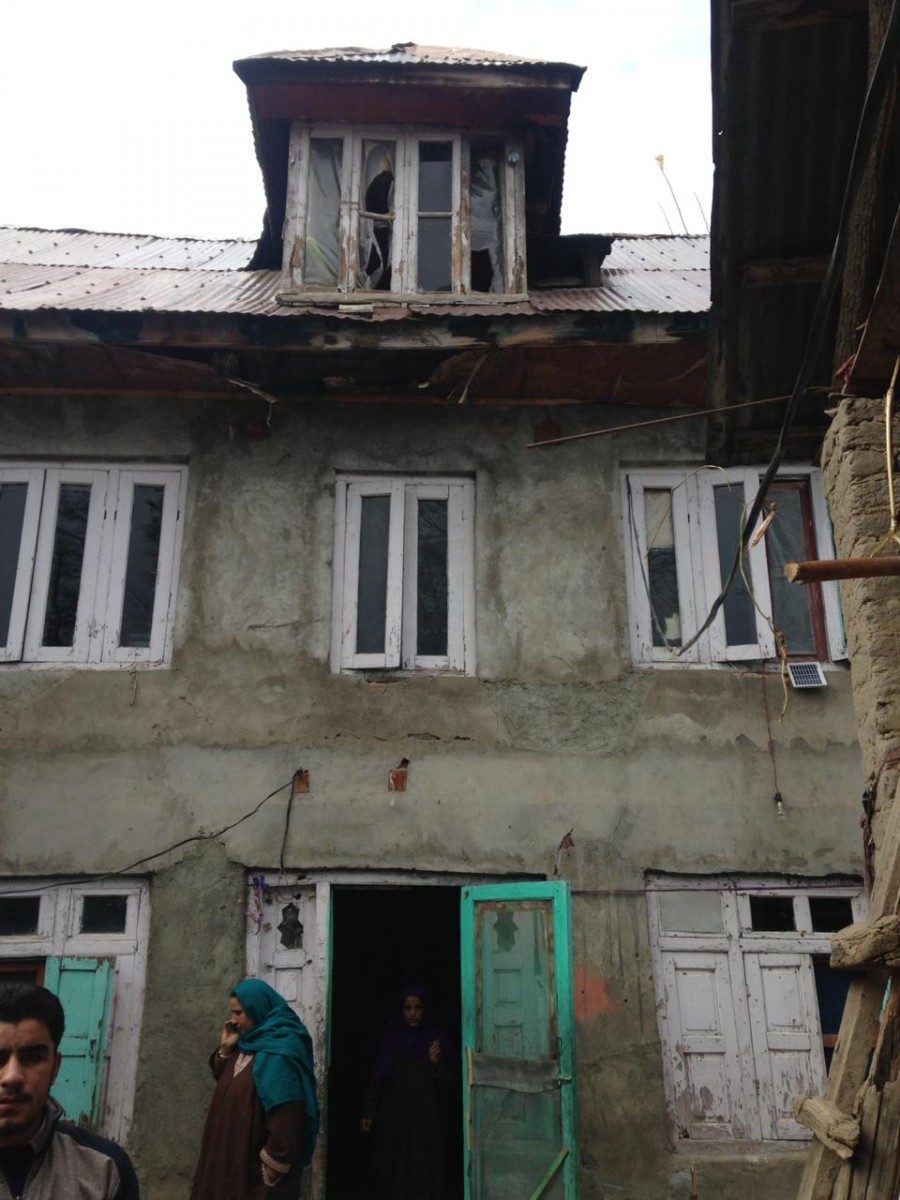 “He maintained a low profile. I couldn’t imagine him being in touch with the army. But the village has now seen his confession. Only Allah knows what’s the truth,” said Kuttay’s friend and neighbour Abu.

Local residents told The Wire that nobody from Kuttay’s family is associated with militant groups, nor have they taken government jobs. “In fact, in the new phase of militancy, there has been no one from this village that has joined a militant group. Muzamil Magray from Watoo Aharbal, a village close to ours, was the only youth that I know of who had joined militancy. He was killed last month,” said Hafizullah, who lives in the same area.

Around 20 km of Kuttay’s home lies Safanagri village. A video of 18-year-old Safanagri resident Nadeem Manzoor Dar being executed surfaced on social media, sending shockwaves across India. The video showed Dar, a Class 11 student, sitting on the ground with his hands tied before being shot multiple times.

The Wire spoke to Dar’s family on Monday evening. “On Thursday three men came looking for Nadeem. They were received by my wife, who told them that he wasn’t home. Once the men left, my wife panicked and went to my brother’s house, which in the the same courtyard, to discuss what had happened. Around 15 minutes later, Nadeem walked in. As soon as he stepped into the house, my elder son Sartaj and his mother inquired about why the militants were looking for him. Nadeem told them that he had done nothing wrong, and set off to chase the militants and tell them that he was clean,” said Manzoor Dar, father of the deceased teenager.

Once of Nadeem’s six uncles, Bashir Ahmed, told The Wire that the teenager had a serious “drug problem”, which is why he was considered an outsider in the conservative family. Nadeem’s father claimed that except for his mother, most of the 45-member family was no longer on talking terms with Nadeem. Nadeem’s family, with his father in the centre.

Abdul Hameed, Nadeem’s eldest uncle, said the entire family had seen the video of Nadeem’s execution. “As much as it hurts us to see it, the confession really shock us. Being a drug addict is something, but an informer is another,” said Hameed. The family, instead of holding the militants accountable for the killing, seemed to be blaming the “drug problem” in the area.

Also read: ‘I Am Worried About our Future Generation, Do We Have to Fill our Graveyards?’ 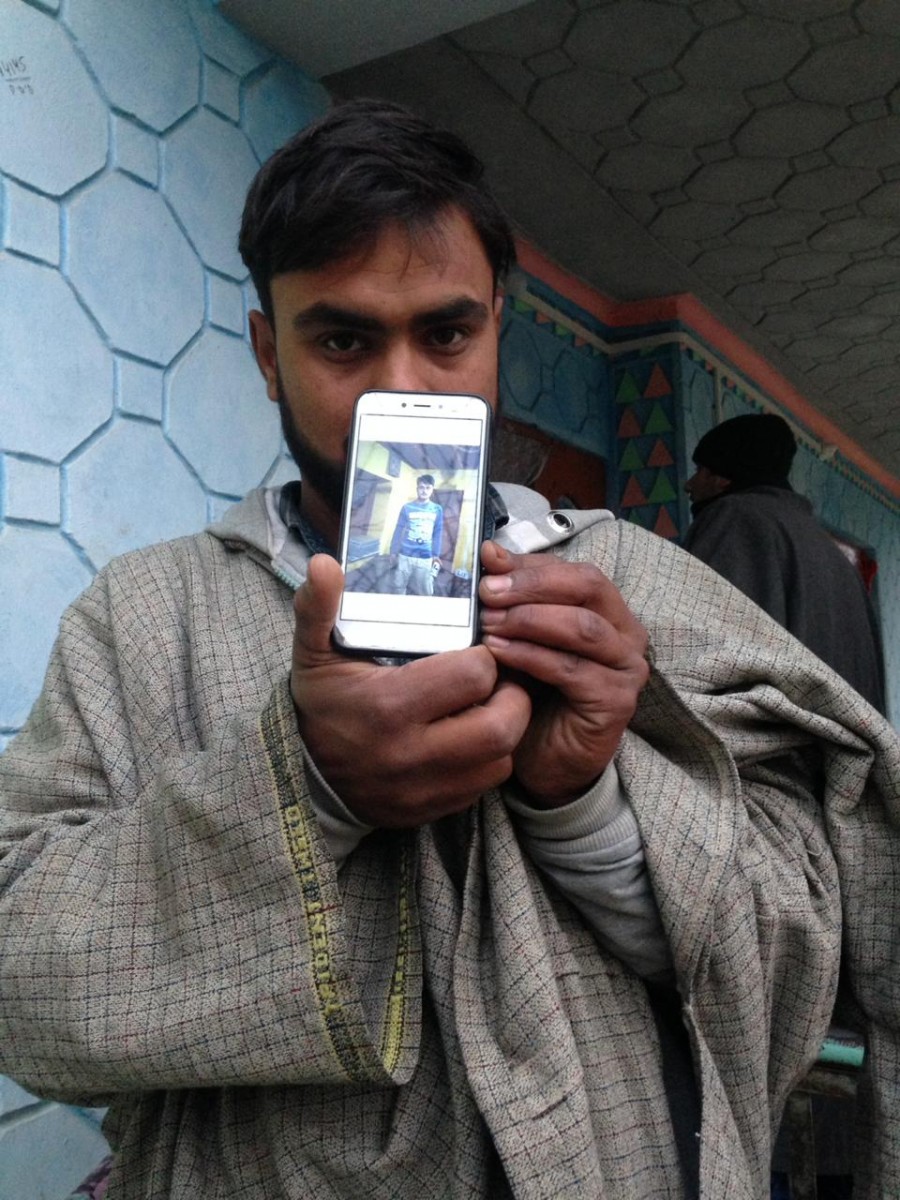 “After he left home to look for the militants, we heard he couldn’t find them. He didn’t return and instead hung out with his friends and was seen smoking. That is when the militants came back looking for him and took him along. When I first heard that he was taken by the militants, I was relieved as I thought they will teach him a lesson on not doing drugs. They (militants) have counselled a few youth who had been taking drugs. I thought he will be released, but that wasn’t the case,” said the father of the teenager.

Around midnight, another uncle of Nadeem’s received a phone call informing him about the recovery of a bullet-ridden body who was believed to be Nadeem. An hour later, the police that confirmed that it was in fact Nadeem Manzoor.

“That night we didn’t go to take the body, fearing army questioning. We brought the body home the next day,” said Manzoor Ahmed. His younger brother remarked,”He might have been a troubled child, but in that video when he looks back for one last time before being shot, that moment breaks my heart.”

Nadeem’s uncle Bashir Ahmed made one final interjection. “We are requesting the authorities to take action against the drug menace in our area. Had Nadeem not been on drugs he would have not gotten involved in this tussle,” said Ahmed.

The eldest man in the family, Abdul Hameed, concluded the interview by making an emotional plea while surrounded by dozens of relatives and neighbours. “Please resolve the Kashmir issue. Whether it’s police, militants or informers, at the end of the day it’s a Kashmiri blood that falls on the ground. End this bloodshed before we lose another generation.”

All photos by Azaan Javaid.