Explainer: Why Is the Indian Army’s 61 Cavalry Regiment Being Downsized?

The army chief is reportedly considering a proposal to merge three in-depth recce squadrons with its tanks and personnel with the 61 Cavalry headquarters. 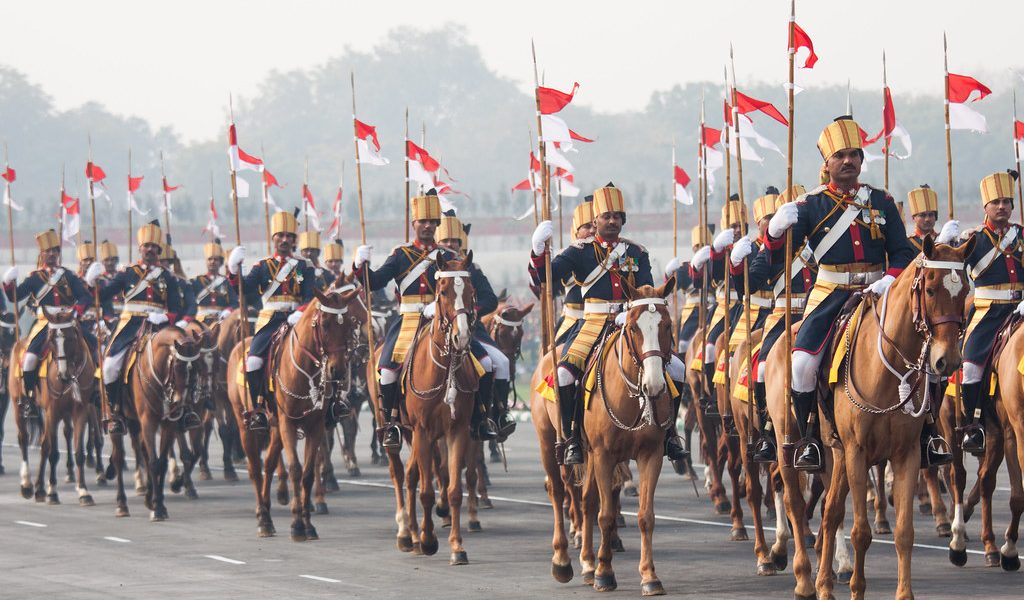 The 61st Cavalry Regiment of the Indian Army. Photo: Angad Singh/Flickr, CC BY 2.0

A clutch of men in their military finery, mounted on handsome horses, trotting by the presidential dias was a reminder that the Indian Army is the only military power in the world to possess such a non-mechanised, operational regiment.

Every Army Day, it is also this regiment that leads the parade.

Now, caught in the midst of all round cost-cutting, the buzz is, the government is going to downsize the regiment and turn it into a mechanised one – much like many other cavalry units that were made full-fledged armoured regiments post-Independence.

As per news reports this week, Army chief General M.M. Naravane “is studying a serious proposal to merge three in-depth recce squadrons with its tanks and personnel with the 61 Cavalry headquarters in Jaipur and raise a new armoured regiment.”

Also read: A Forgotten Memorial That Gives Indian Soldiers of Yore Their Due

“It is this regiment that will carry the illustrious 61 Cavalry name,” said a report in News18, quoting official sources.

With steps possibly being taken to wind up India’s only horse-mounted cavalry regiment, it is perhaps time to rewind and acknowledge what led to the formation of the regiment and what have been its achievements, including its stellar role in promoting Polo and other equestrian games.

Has the regiment lost its utility altogether to qualify for a burial?

What was the genesis of 61 Cavalry?

Like most regiments, the origin of the 61st Cavalry also goes back to the British period. The Viceroy’s Body Guards and other horse-mounted units drawn from various Indian princely states were part of the Imperial Service State Forces. In October 1953, all these units were combined and brought under a new regiment named 61st Cavalry. It was formalised in January 1954 with Lt. Col. Phulel Singh of Jammu and Kashmir State Forces as its first commandant.

To keep the traditions alive, the regiment recruits only Marathas, Rajputs and Kaimkhani Muslims in equal numbers. This was as per the instructions of the first Prime Minister Jawaharlal Nehru.

What are the major achievements of the regiment?

Every September 23, the Indian Army celebrates Haifa Day, signifying the crucial role the Indian Cavalry played under the Royal British Army, in freeing the coastal city of Haifa (now in Israel) from the enemy forces during its Sinai and Palestine campaign in the First World War. The cavalry regiments of the princely states of Jodhpur, Hyderabad, Mysore among others mostly populated the Royal British Army’s 5th Cavalry Division that led the campaign in the Battle of Haifa in 1918. The victory hugely helped the British forces to use the Haifa port to carry supplies closer to the battlefront.

The three bronze statues of the Indian Cavalry soldiers spotted on New Delhi’s Teen Murti roundabout is a reminder of that victory. The memorial was sculpted by Leonard Jennings in British India. Placed right outside the Teen Murti Bhavan where the first Prime Minister of an independent India resided, the statute had gained prime of place.

In an article in the Asian Age in 2017, Lt. Col Anil Bhatt, VSM (Retd) described, “The three statues represent Sowars (as cavalry and armoured corps soldiers are known) from the three Indian state forces — Hyderabad, Mysore and Jodhpur — together with detachments from Bhavnagar, Kashmir and Kathiawar, which were part of the 15th Imperial Service Cavalry Brigade.”

Speaking to The Wire, Bhat recalled, “In January 2018, when Israeli Prime Minister Benjamin Netanyahu visited New Delhi, Prime Minister Narendra Modi broke protocol and went straight to that memorial on Teen Murti Marg from the airport with him. There, the duo paid homage to the brave Indian soldiers that fought the Battle of Haifa and thereafter named it Teen Murti Haifa Chowk.”

In September that year, the Haifa administration celebrated the centenary year of its liberation from the Ottoman rule and honoured the Indian soldiers who laid down their lives for it. According to news reports, “Captain Aman Singh Bahadur and Dafadar Jor Singh were awarded the Indian Order of Merit (IOM) and Captain Anop Singh and 2nd Lt Sagat Singh were awarded the Military Cross (MC) as recognition for their bravery in this battle while Major Dalpat Singh was awarded a military cross for his bravery.”

At least 900 Indian soldiers who fell in that battle have been buried in cemeteries in Haifa, Jerusalem and Ramle. In 2017, during his visit to Israel, Modi, as the first Indian prime minister to visit that country, had paid his homage at the Haifa cemetery.

In post-independence India, the 61st Cavalry played an important role during the India-Pakistan War of 1971. The regiment took to patrolling the areas which were difficult to cover with vehicles or on foot.  It was also used in Operation Vijay in 1961 to annex Goa.

In 2001, it played a role during the Army’s Operation Parakram, launched after the Parliament attack, as a preparation for war.

The Indian Army’s operational manual counts the regiment as part of its war establishment to be deployed for roles like patrolling forward areas, scouting and guarding vital areas. What role does the regiment play in promoting Polo and other equestrian sports in India?

Thanks to the polo-playing traditions of this regiment, India has pocketed gold in World polo championships in 2011 and 2017. India’s highest handicapped polo player is Col. Ravi Rathore, presently the Commanding Officer (CO) of the regiment, an Arjuna awardee.

“Polo is an elitist sport with infrastructure almost out of bounds for a civilian. The Army and the royalties have kept this spectacular and skilful sport going. The 61st Cavalry has played an iconic role in sustaining Polo and other equestrian games,” said senior sports journalist Vijay Lokapally. “The National Sports Code has not been met with a favourable response from the Army and this move (of reconstituting the regiment and thereby affecting the game) will likely face stronger resistance (from within the Army) as it would be detrimental to Polo and equestrian games,” he said.

Col. Rajesh Pattu, a veteran polo player who has represented India in several international tournaments and was the Commanding Officer (CO) of the 61st Cavalry prior to present Col. Rathore, was scathing in his response to the recent move, “Disbanding the 61st Cavalry for reasons of cost cutting is deleting an integral link of the Indian Army’s heritage and tradition which can never be replaced. The 61st Cavalry has produced more medals for India than all other units (of Army) combined while using minimal resources.” He told this correspondent, “The Indian Army would like to keep control of the Equestrian Federation of India while cutting off the arm that gives them the most results. This is nothing but a ploy of a few jealous people who seem to be in favour with the powers that be.”

What is the Army’s plan for the regiment post-COVID-19?

As per news reports, the proposal to change the 61 Cavalry to a mechanised regiment may have been fast-tracked due to cost-cutting post-COVID-19 crisis but the original idea is said to be based on the recommendations of the Committee of Experts (CoE) headed by Lt Gen. (retd.) D.B. Shekatkar.

The committee had submitted its report in December 2016 suggesting measures to increase the “combat capability and re-balance defence expenditure” of the armed forces. Though the report is not in the public domain as it covers operational aspects of the defence forces, according to a note by the Press Information Bureau in February 2019, the committee had suggested 99 recommendations including “better utilisation of supply and transportation echelons and animal transport units” and “closure of military farms”.

The Army would reportedly go about mechanising the 61 Cavalry by bringing under it three independent armoured squadrons located in different parts of the country. “This will entail virtually no extra expenditure as the squadrons are already equipped with tanks,” a senior officer told the Indian Express. The transition will take around five months “or even more in view of the COVID-19 restrictions in place”.

Reports said with additional T-90s and Arjun tanks being readied, the Army is keen on raising armoured regiments. “The CO (commanding officer) of the new armoured regiment (61st Cavalry) at Jaipur will be given “command and control’ over three independent  T-72 tank squadrons, as per the plan”, the Times of India said.

As per news reports, it would only have 232 horses which would be transported to Delhi from Jaipur, the headquarters of 61 Cavalry, to be occupied mainly for ceremonial purposes. Though it is not clear yet, the participation of the horses in the Republic Day parade as a ceremonial exercise may continue. But for all practical purposes, the President’s Body Guards (PBG), which performs the ceremonial roles for the Rashtrapati, would remain the only horse-mounted component of the Indian Army. It would be akin to the Household Cavalry Mounted Regiment of the British Army which too performs mainly ceremonial duties, including escorting the Queen for the state opening of Parliament.

Does it make sense to disband the cavalry for an armoured version?

The oldest surviving veteran of the regiment, Col. H.S. (Billy) Sodhi, has termed the government’s move silly. “Horses are lucky for any army. How much money do you think they can save by reducing 32 or 50 horses from our stables? Yes, the army needs to modernise, but some traditions need not die. A link between the past and present needs to be kept alive,” Col. Sodhi was quoted in the Times of India.

Lt. Col Bhatt who is also an army historian besides being an independent strategic affairs commentator after his retirement, said, “The retention of 61st Cavalry as a horsed cavalry regiment was also significant because it has helped survive the historic tradition of cavalries of many erstwhile Indian dynasties and kingdoms. Besides, the regiment also trains army officials in horse riding, which is an important skill. I am sad to hear about plans to make it a mechanised regiment, like the rest of them, especially when it still has its utility. Besides being the link between our past and the present, it also helps Army win many medals in equestrian games which helps to promote those practices. These points must be looked into before reconstituting the regiment.”

A retired officer from the regiment added, “The Indian Army has 3,000 horses covering all its units. It is strange that it is talking about disbanding the 61st Cavalry citing cost cutting measures, which has only 280 of those horses.”