The Fundamental Problem With Defence? The Continuing Paucity of Funds.

No finance minister in over a decade has ever met the armed forces' expectations for budget allocations – but that has not prevented them from making financially unviable demands on the exchequer. 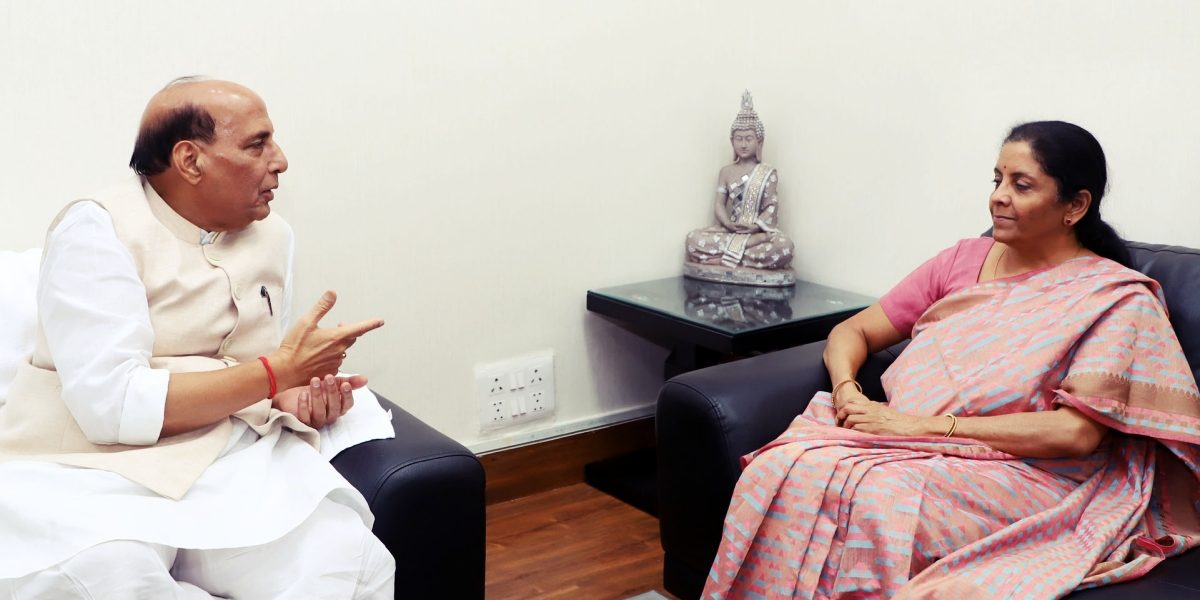 One enduring expectation the armed forces perennially harbour ahead of the Union Budget each year is a substantial hike in their annual outlay. Unfortunately for them, no finance minister in over a decade has ever met their expectations – but that has not prevented them from making financially unviable demands on the exchequer.

The situation is unlikely to be any different this year, when finance minister Nirmala Sitharaman presents the Union Budget for the financial year (FY) 2023-24. Going by the past trend, the allocation for defence expenditure could increase by 10-12% over the current financial year’s budget estimates (BE), but there is little doubt that it will be far below the armed forces’ expectations.

Ironically, the services are ever aware of this grim paradox. In keeping with the projections conveyed by them sometime in 2019-20 to the 15th Finance Committee (FC) for the period 2021-26, they would be expecting an allocation of Rs 4,31,920 crore for FY 2023-24, or an increase of about 12% over the current year’s BE.

This expectation may well materialise, but the allocation will be as much as Rs 3,02,119 crore less than the estimated requirement reported by them to the FC. The estimated requirement put forth by the armed forces will require the finance minister to nearly double the defence outlay, which is not only unprecedented but also unviable.

For sure, the data for the current and previous financial years indicate that the financial requirement conveyed to the FC was subsequently pared down by the services, but even then, the eventual budgetary allocation fell short of this much-reduced demand.

Defence analysts have expended a lot of sweat and energy over the past two decades in arguing that the services’ enduring financial deprivation was a direct fallout of the civilian bureaucracy’s inability to grasp the strategic imperative of building up India’s military and force capabilities. And though this narrative gained credence in the defence discourse and social media circles, ironically it was not the root cause of the financial problem.

Also Read: Modi Government’s Budget 2023: A Peek into the Past, Present and (Likely) Future

The stark reality is that budgeting remains a zero-sum game. The budget outlay for defence and other sectors is circumscribed by the total revenue the government generates via taxes and other miscellaneous means like disinvestment in the public sector, and non-tax revenue which consists of interest receipts on loans given by the Centre, dividends and profits, external grants, and receipts from general, economic, and social services, among others.

Since the expenditure always trumps this income, governments routinely borrow money to manage budgets. But the difficulty every finance minister faces is that all these sources of revenue – taxes, non-tax receipts, miscellaneous income, and borrowing – have inherent limitations.

Increasing taxes or widening the tax net is, without doubt, an unpopular gambit. No federal government can risk the political and social cost of taking such a step, unless unavoidable. With nine state assembly elections due later this year, followed by parliamentary polls in early 2024, the possibility of any substantial increase in taxes can safely be ruled out in FY 2023-24.

As the experience of India’s two neighbours – Pakistan and Sri Lanka – demonstrates, unfettered borrowing, measured in terms of debt-to-GDP ratio, can be ruinous, as it entails a high risk of default in loan repayment and discharging other sovereign financial obligations.

According to a World Bank study, such a ratio that exceeds 77% over an extended period can have an adverse impact on economic growth. India’s debt-to-GDP ratio has been hovering over 83% since 2020. It currently stands at 83.4% and is estimated by financial analysts to remain at these levels till at least 2027.

The non-tax revenue and recovery of loans do not amount to much in the overall context, accounting for just Rs 2,69,651 crore and Rs 14,291 respectively in the current year’s budget which envisages expenditure of Rs 39,44,909 crore.

The miscellaneous income, referred to as ‘other receipts’ in the budget documents, mainly comprises income from disinvestment in the public sector. This income is uncertain and quite insignificant. The total revenue generated from this source in the FY 2020-21 was Rs 37,897 crore. The following year, the estimated income of Rs 1,75,000 crore from this source was downgraded to Rs 78,000 crore while in the current FY, the target was reduced further to merely Rs 65,000 crore.

In the face of such economic constraints, it is futile to argue that defence expenditure must receive priority, irrespective of the revenues generated, and to the exclusion of other critical sectors like health, education, agriculture, infrastructure development, internal security, environment, and poverty alleviation, amongst others.

The present trend of making election promises, in total disregard to their financial implications, is the new elephant in the room. Five states – Chhattisgarh, Himachal Pradesh, Jharkhand, Punjab, and Rajasthan – have restored to the ‘Old Pension Scheme’ or OPS, under which a defined, but gradually increasing, pension is paid to the employees after retirement.

The OPS was discontinued by the Congress-led United Progressive Alliance in 2004 on fiscal considerations. It was replaced by the National Pension Scheme for later entrants to the government service, linking pension payouts to prevailing market conditions. Political expediency has now forced a volte-face.

Senior economists have warned against implementing such ‘beggaring’ policies as they only added hugely to the burden of obligatory expenditure of the states, and ultimately that of the federal government. The demand for OPS’s restoration in the election-bound states and for the Union government employees will inevitably gather momentum in the run-up to this year’s assembly, and next year’s general, elections.

The National Joint Council of Action (NJCA), comprising 50 Central and state government employees’ unions, including two major railway workers’ associations, has already warned the government of a series of protests to press its demand for restoration of the OPS. It is anybody’s guess whether the demand will, indeed, prevail, but the finance minister cannot wish it away.

Economic realities are generally ignored in India’s strategic discourse and rarely, if at all, factored into defence planning. Consequently, the armed forces continue to make financially unviable plans. The 10th, 11th and 12th defence five-year plans, spanning 15 years from 2002-03 to 2016-17, and the one prepared in 2017 with an estimated outlay of Rs 26,83,294 simply ran aground due to the financial unviability of each of them.

Meanwhile, egged on by a section of influential opinion makers, the government has taken several curious steps like proscribing the import of 410 defence items in a phased manner, allocation of a high percentage of the capital budget for materiel procurement from indigenous sources and locally manufacturing military equipment via a transfer of technology from overseas original equipment manufacturers under the rubric of ‘Make in India’.

Some other policy initiatives, such as earmarking 25% of the research and development budget for the private sector, establishing a ‘non-lapsable’ pool of funds to modernise the armed forces, remain a work in progress. None of these vacuous steps can address the fundamental problem which is the continuing paucity of funds.

Be that as it may, bowing to the ubiquitous political considerations, the finance minister may refer to the ‘successes’ of some of the earlier ‘initiatives’ mentioned above or announce new ones in her budget speech to showcase the government’s commitment to atmanirbharta, or self-reliance in defence, which has become the mantra for reinvigorating India’s defence without any substantial hike in the defence outlay.