Jammu, Feb 15: In a tussle between protestors and police in Gujjar Nagar area of Jammu city, one policeman, SSP Jammu Tejinder Singh, and a civilian were wounded.

Curfew was imposed in Jammu city on Friday as a precautionary measure following massive protests and stray incidents of violence over the terror attack in Pulwama, in the Kashmir Valley, in which 40 CRPF personnel were killed, officials said.

The army has been requested to help the administration in maintaining law and order and conduct flag marches, they said.

“We have imposed curfew in Jammu city as a precautionary measure,” Deputy commissioner of Jammu Ramesh Kumar told PTI.

In different parts of Jammu city, protestors have refused to disperse. Several vehicles have also been damaged in the Gujjar Nagar area. According to officials, there is complete bandh in Jammu city and there was no traffic on roads and all shops and markets were closed. 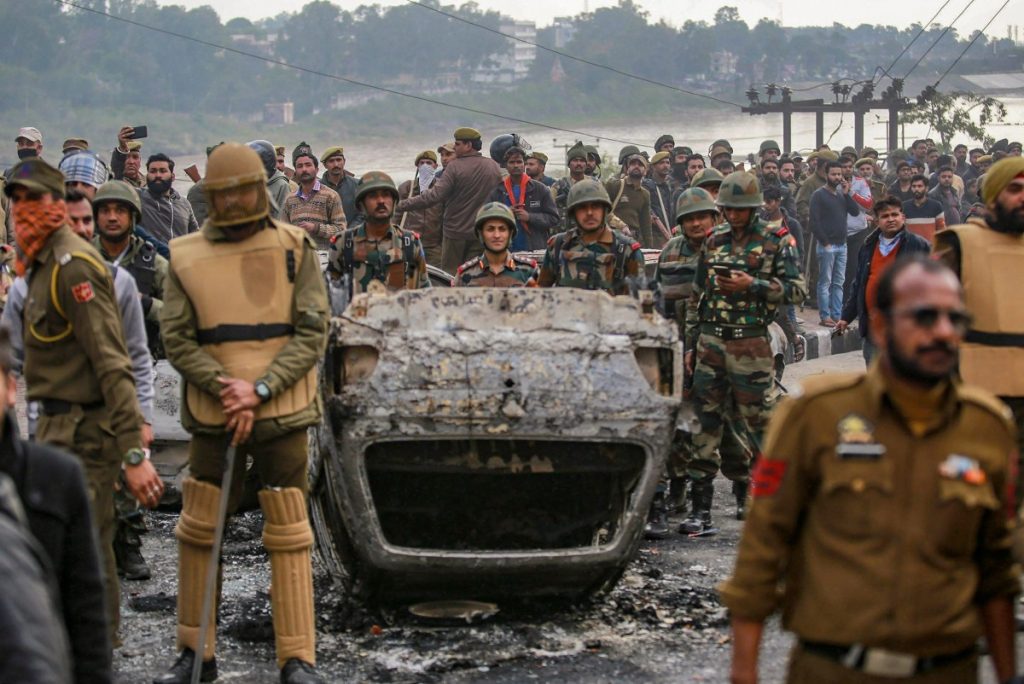 Security forces personnel stand guard near charred vehicles after a violent protest over the killing of CRPF personnel, in Jammu, February 15, 2019. Credit: PTI

Led by the Bajrang Dal, the Shiv Sena and the Dogra front, people took out candle light marches in the city and held anti-Pakistan protests.

The Jammu Chamber of Commerce and Industries (JCCI) had on Thursday called for shut down in Jammu protesting terror attack.

This decision was taken by JCCI President Rakesh Gupta, along with his office bearers and presidents of different affiliated associations including transport operators associations.

Protesting the Pulwama attack, the Jammu and Kashmir High Court Bar Association, Jammu, suspended work in all the courts in Jammu, including the high court and tribunals.

“The suspension of work by the association is a mark of respect to the CRPF jawans killed in the Pulwama attack and to express our solidarity and sympathy with the bereaved families,” J&K High Court Bar Association Jammu President, B.S. Slathia said.