The Long Game: What India Is Getting Wrong About China's Intentions in Ladakh

Indian generals believe that a war in Ladakh and the eastern sector would be an upgraded 1980s-type air-land battle. In reality, China has been prepping for 'informationised’ warfare. 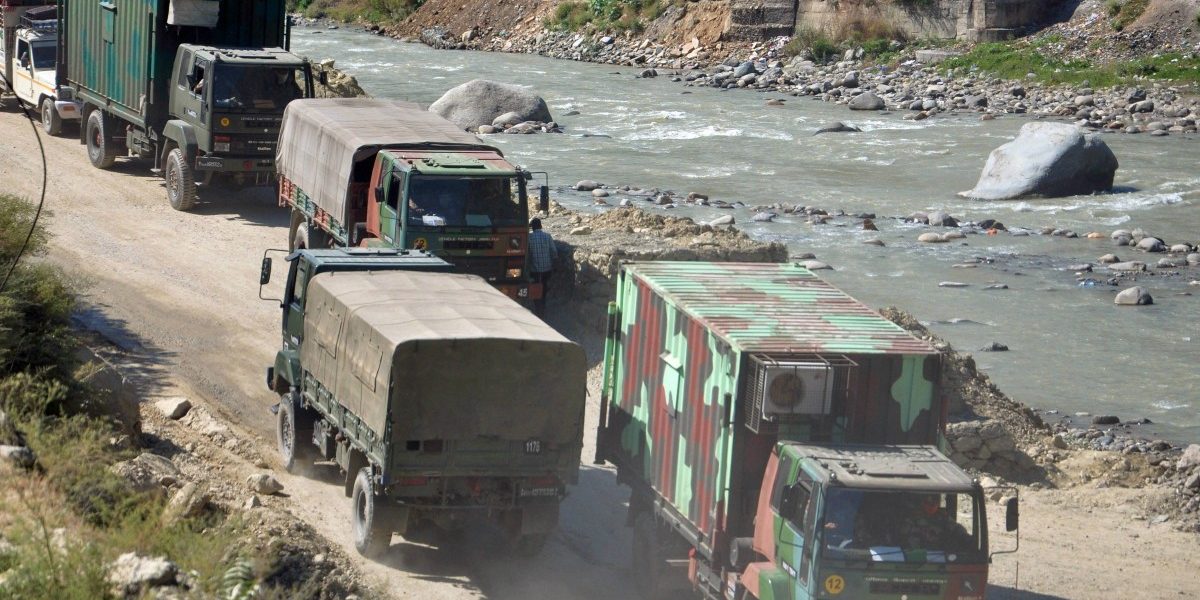 An army convoy carrying military material on its way to Ladakh amid border tension with China, at the Manali-Leh highway, September 30, 2020. Photo: PTI

Several senior retired military officers believe that the Ladakh military impasse, if not ended soon, could lead to an escalation and a possible limited conventional war which neither side wants. This assumption is as unfounded as the PLA’s multi-pronged attacks in May being a consequence of India’s intelligence failure. This betrays a continued misreading of the 2017 Doklam crisis and consequently the war that each side seems to be bracing itself for.

Following its 2015 military reforms, the PLA created the Western Theatre Command (WTC) – its geographically largest war theatre – with a defined enemy: the Indian military. Its challenge then was how to bring the WTC allocated two group armies (76 and 77) and associated paraphernalia with nearly 200,000 troops in the Tibet Autonomous Region, without being viewed as aggressors since that would impact its drumbeating of peaceful rise essential for its Belt and Road Initiative and the ‘China Dream‘.

An added problem were the bilateral 1993 and 1996 agreements between India and China, which had committed both sides to keep minimal troops on the Line of Actual Control. Not only were numbers of forces, equipment and munitions that each could bring forward defined, the level of military exercises that each could do without mutual consent was spelt out. China had made these commitments in 1993 when its military purpose was limited to good border management, and its ambitious geo-strategic outreach under Xi Jinping was decades away.

Once pressure to inhabit the WTC with allocated troops and war materiel grew, China came up with the brilliant Doklam plan. Why not start a military crisis at a place where the Indian Army at a hugely advantageous tactical position would feel compelled to come to Bhutan’s defense with which it had a special relationship? China unleashed its wolf warriors and its state-controlled media went unusually ballistic threatening India with war even as the diplomats were busy negotiating peace. India’s then eastern army commander, Lt Gen. Praveen Bakshi, said at a talk after superannuation, that there was increasing pressure on him to prepare for war even as he was convinced that the PLA given its tactical disadvantage would not initiate one. Once there was an accretion of forces on the Indian side, the PLA too, under the garb of self-defense, started increasing its numbers in TAR.

Also read: From ‘LAC’ to ‘Border Areas’, the Joint Statement Indicates What India Has Lost to China

After the crisis ended, the Indian army brought the additional forces back. But the PLA did not, arguing its troops were on its own territory. Starting winter of 2017-2018, the PLA at furtive pace and given its unmatched infrastructure technology built good habitat for troops at average 15,000 feet; and created ecosystem comprising shelters, airfields, underground munitions, missile dumps, radar station, fiber optic cables and so on. By mid-2018, the PLA, according to 2020 Pentagon report to the US Congress, had commenced realistic combat training in WTC and other war theatres.

When asked about PLA’s heightened combat related activities in TAR, a senior general of the eastern command repeated the official Army Headquarters position to me in June 2019. Doklam, he said was our victory since we had compelled the PLA to live in inclement conditions like our soldiers on the LAC.

Fast forward to Ladakh. Since the PLA is comfortably ensconced in TAR where it can do combat training, where was the intelligence failure? I had maintained since the beginning of the crisis that once the PLA intentions changed in May it could easily divert troops from combat exercise for multi-prong intrusions in Ladakh. Interestingly, after keeping quiet for months, unnamed sources have admitted (Economic Times, September 25):

“They (the PLA) always had the capability but their intensions changed overnight… In such a case, the first mover has the advantage.”

Ladakh was the collective command failure of the Indian Army where the blame should rest with the topmost commander: the Chief of Defence Staff, who was the previous chief of army staff.

Army generals have once again got the PLA’s intentions wrong in Ladakh simply because they are unaware of the war that it is preparing to fight in the WTC. There is not only an unbridgeable gap between the science of war (war materiel and technology) of the PLA and the Indian military, there is an embarrassing deficit in the art of war (generalship on how war should be fought to win) between the two sides. The Indian generals believe that war in Ladakh and the eastern sector would be an upgraded 1980s-type air-land battle which had four distinctive features:

To be sure, the AirLand Battle doctrine predates the 1991 US-led Gulf War against Iraq through which the PLA learnt about networking of the kill-chain in real time. And how to end the war asymmetrically the easy way by disrupting the kill-chain rather than fight the enemy. Different from the land-based kill-chain, this one comprised of all sensors on land, air and space networked with the command and control centre with, in turn, was connected with shooters like combat jets in air and guns on land.

The Indian military, focused on the Pakistan military, did not grasp the import of the networked kill-chain and importantly the need to secure it from electronic warfare and cyber offences once information technology and digitisation of warfare lessoned the burden on the soldier.

With the arrival of new disruptive technologies, new war domains surfaced, and to remain relevant for real-time warfare, the kill-chain became complex and vulnerable. Complex because more war domains got added and vulnerable because there was more to be secured. By early 2000s, the PLA, fixated on the US military, had identified six war domains, namely, land, air, sea, cyber, space, and electromagnetic spectrum management. The PLA’s ‘Informationised’ warfare was about building capabilities in these domains, especially the new ones which were uncontested and uncongested. The pivot of this warfare was cyber capabilities which it has been honing since the turn of the century.

Once disruptive technologies like Artificial Intelligence came into warfare by 2012, and given Xi’s ambitious role for the PLA, China’s 2015 military reforms took place. The singularly important issue which would transform the character of war, and which went unnoticed in the Indian military was this: Focus had shifted from domains and geography to time sensitive mission-sets. Called the ‘Intelligensised’ warfare, this is what the PLA intends to fight in the WTC against the Indian military. It would be ready for this new warfare by 2025. The US military, keeping pace with the PLA, calls this fusion or Mosaic warfare.

Coming to the present, retired top commanders like Lt Gen. D.S. Hooda write that ‘the Indian military forces are well-geared and prepared for escalation to conventional war.’ This assessment is misplaced and misleading. With large inducted troops still struggling to create habitat, with war materiel being fast tracked for a respectable ecosystem, with calibration of weapons yet to be done, and with little training in the high-altitude war theatre, it’s nothing but rhetoric that Indian military is prepared to fight the PLA. Especially when the PLA is ready with Informationised warfare.

Surely, if war happens, the PLA will pull back its border forces which are engaged with the Indian army. It would unleash its Informationised warfare predicated on cyber, space and its projectile-centric strategy based around long range ballistic and cruise missiles. Since the projectile-centric strategy depend upon kill-chains for command and control, the Indian military, unlike the US military, lacks capability to disrupt or destroy them.

The good news is that the PLA will not go to war, but it will prepare for the Intelligentsised war. For that, it needs information on enemy’s habitat, ecosystem, operational logistics, enhanced winter stocking, operational and tactical infrastructure vulnerabilities, deployment patterns, command and control, recalibration of weapons, training and everything on how the enemy proposes to fight under Air Land battle doctrine. The PLA will be in no hurry to disengage and it will certainly not de-escalate let alone de-induct forces since it wants to observe the Indian military’s growing war preparedness through the winter months. Make no mistake, the PLA threat is permanent.

The PLA thinking on war is well-known: It will not attack (by firing straight at enemy soldiers) but will counterattack. Since the ball is in India’s court, two issue should be clear: the generals don’t know about the grossly mismatched war-fighting doctrines of the two sides.

And, the PLA being the better-prepared side, would decide the scope of war: limited or full scale.