India must build consensus within its parliament and among its people in order to stop being bullied by China. 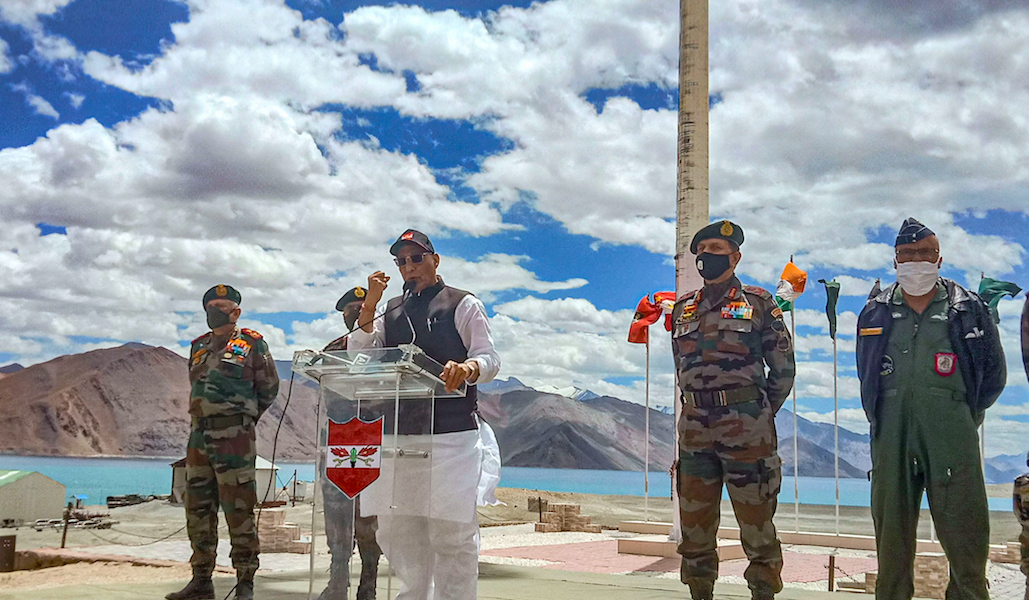 It is not easy to emulate master orator Prime Minister Narendra Modi. His stellar performance in Leh was being described as a turning point in the half-baked disengagement and de-escalation process, until defence minister Rajnath Singh who was the first in breaking news of the People’s Liberation Army’s intrusions also became the first to declare at Leh last week that the process might not resolve the border problem.

“But no one can touch an inch of our land,” he added, knowing full well that the PLA has ensconced multiple intrusion sites as deep as 2-18 km, on the Indian side of the Line of Actual Control (LAC).

As is customary with all politicians, Singh warned of a “befitting reply” for any PLA misadventure.

If the Chinese do not vacate, they will have annexed roughly 600 sq km of Indian territory unilaterally, altering status quo by shifting the LAC further westwards towards Shyok river, even crossing their 1960 claim line.

Just a day before Singh spoke, for the first time Northern Army spokesperson Lt Col. Aman Anand said the disengagement and de-escalation process (DPP) was full of intricacies and its verification required time simply to obfuscate the Actual Ground Position.

Speculation is running high about disengagement – was there a disadvantaged withdrawal at Galwan, was there a partial one  from Hot Springs and Goghra or none at all. Pangong Tso Lake and Depsang have not been addressed yet.

It is always instructive to diagnose the statements coming from both sides. Indians have been calling for full restoration of peace and tranquillity (a Chinese formulation originating from Peace and Tranquillity Agreement of 1993) in accordance with border protocol (1993, 1996, 2003, 2005, 2012 and 2013) and urging that both sides respect the LAC. Later, Indian statements have included restoration of status quo ante (May 5).

The Chinese too have sought disengagement and de-escalation in a timely manner in a spirit of peace and tranquillity in border areas. The acronym LAC has, conspicuously, not been used.

It seems that India’s negotiating strategy (from a position of weakness) did not factor in the lessons of earlier DPPs starting with Sumdorong chu, Depsang, Chumar and Doklam. These were all single intrusions where the end state was a vacated area and return by both sides to their original positions.

Also read: Neither Win Nor Loss, the End of the Doklam Standoff is an Opportunity

Although the Sumdorong chu intrusion occurred on June 16, 1986, and withdrawal of troops took place nine years later on August 25, 1995, it was the Indian Army’s overwhelming military domination of the PLA incursion at Wangdung that resulted in a slew of political and military benefits for India.

But equally importantly, India had insisted ab initio during negotiations on the terms and rules of disengagement.

At the time, deputy leader of opposition in Lok Sabha, BJP’s Jaswant Singh, asked why India was withdrawing from its own territory and dismantling its posts. The intrusion across McMahon Line was resolved during the eighth Joint Working Group meeting in 1995 and maps of the area exchanged four years later during the 12th Joint Working Group.

The government has assiduously peddled a fake narrative from day one. From the denial of intrusions till the Galwan clash to Modi’s disingenuous whitewash of the brawl on June 19 to his spewing ‘fire and fury’ (the motto of Ladakh’s 14 Corps) to the high-on-optics visit of Singh – all choreographed to demonstrate that India was calling the shots along LAC till Singh spilled the beans that dialogue might not resolve differences.

In creating the false narrative, the government has used the services of former Army Chief and junior minister in government, Gen. V.K. Singh, a string of NSA Ajit Doval acolytes and Lt Gen. S.L. Narasimhan of the National Security Advisory Board.

These government faithfuls have done a terrible job portraying that the Chinese are clean, with Narasimhan going to the extent of saying that at Galwan some Indians may have crossed to the Chinese side of LAC!

The government’s defence of the Chinese behaviour was music to Beijing’s ears. When India asked for enhanced-level talks with Doval and his counterpart Wang Yi, Beijing quoted Modi and his cohorts, wondering why talks were required when the Chinese, according to Indians, had not transgressed.

The Ladakhis are extremely unhappy at the government’s denial of Chinese aggression. Col. Sonam Wangchuk, the hero of the Chorbatla Battle in Kargil where he won an Maha Vir Chakra has said that government’s actions reflect that it does not want the people to know the truth. Many other Ladakhis including BJP supporters and office-bearers are livid with the government’s timidity in dealing with the Chinese.

Ladakhis have lost grazing pasture and land to periodic Chinese encroachment. As someone who has served in Kargil and Ladakh, I am privy to our acquiescence to Chinese territorial aggression.

Only the government knows the true picture. Now that Singh has expressed misgivings about DPP, Modi must consider ways of redeeming an adverse situation. But before that, a special session of parliament to inform lawmakers and public about PLA intrusions and government response instead of calling those who have been seeking information about intelligence and operational failures as ‘anti national’ is the need of the hour.

The government must also disclose details of Xi Jinping’s January 2020 Training Mobilisation Order following which the intrusions were carried out. Once this is done, there will be national consensus to respond to Chinese threat. This will bring the government, opposition and public on the same grid rather than just Rahul Gandhi sniping at Modi about surrendering to Chinese aggression. Snide remarks like, “they change maps, we change apps” have appeared on social media already.

Watch | ‘Chinese Are on Indian Territory in Depsang and Pangong; LAC Has Shifted Westward’

Singh’s dash to Moscow last month, looking for Russian armaments like tanks and aircraft (as if these are available off the shelf) and the grant of emergency financial powers to the armed services, is shutting the stable door after the horse has bolted.

At Leh, Modi had bragged that he had given the military One Rank One Pension, a National War Memorial and a Chief of Defence Staff. He did not mention that the defence budget for the last six years was consistently pegged at around 1.5% of GDP, the lowest by any government. This year funds allotted for modernisation are virtually negative.

Take the Air Force: its allotment is Rs 43,281 crore but it has a carry-over liability for contracts already signed of upto Rs 47,000 crore. That is the reason key warfighting inventories are hollow, not to mention civil servants counselling the government that there will be no war.

For years the government has said it needs to catch up with China to close the power and infrastructure gap. China is aligned to match US military and technological capability and will leave India way behind. It is out of the COVID-19 pandemic rut and its economy is bouncing back, likely to grow at 3.5% of GDP.

India is sinking deeper into the COVID-19 quagmire, its economy plummeting to an 8 to 9% decline and likely to revive only after two years. This will weaken further India’s conventional deterrent, inviting PLA to keep needling on LAC.

In matching deployment to plug Chinese multiple intrusions, India has had to post upto three additional divisions in eastern Ladakh in response to China’s new forward policy. If the Sumdorong chu DPP model is followed in east Ladakh, forward deployed forces could be stuck for a decade at great cost to the exchequer. Further, the LAC will have turned into a frozen LOC with the Chinese calling the shots.

The PLA has emblazoned a map of China near Pangong Tso lake. Most military despatches suggest that access to almost all patrolling points (PPs) which act as limits to patrolling by identifying India’s LAC, have been blocked by PLA. Our troops have had to pull back 1.5 to 2 km on their own territory in three to four intrusion points and in the case of Galwan, the LAC realigned 1 km west of PP 14 to China’s advantage.

This is a rather grim picture – living with a demilitarised zone on one’s own territory. Here, PLA could do a Doklam by withdrawing from face-off sites but digging down in strength some distance behind it.

Some of my colleagues are suggesting rather late in the day options that are clearly unusable and dangerous. These include occupying Chinese territory in another area, local offensives to evict intrusions, blocking choke points Malacca Straits for the passage of Chinese vessels.

Except for executing counter-intrusions, other actions are escalatory and could spiral into limited war that India cannot afford. For a reverse Chumar or Galwan in Chinese territory, a minimum of one division, with combat support, will be required. Our infantry reserves have already been sucked in but if troops are made available a tit for tat, it promises dividends in places like Chumbi valley.

Our previous worry about Galwan river valley seems to have been overtaken by Depsang, talks on which are due in the next round of DDP. Still India must: occupy Galwan heights at the earliest; prepare plans to prevent and counter interdiction of Darbuk-Daulat Beg Oldie road; construct a strong perimeter defence to safeguard DBO and the airfield and ready forces for a possible offensive towards Aksai Chin in the future.

If India fails to leverage a vacation of intrusions and is seen to be bullied by China – as the Americans have been saying – it will be a big setback for New Delhi’s image and clout in the region and internationally.

Submitting to the hegemony will take the winds out of the sails of a rising India. It is now up to the Modi-Doval-Jaishankar trio to work for an honourable (and face-saving) solution to the DDP and then ending the constant nagging by PLA by getting the LAC delineated.