A Few Questions on China That Narendra Modi Cannot Evade

Indians fed on a diet of military triumphalism for the past six years deserve to know why their government fumbled in its early response to China. 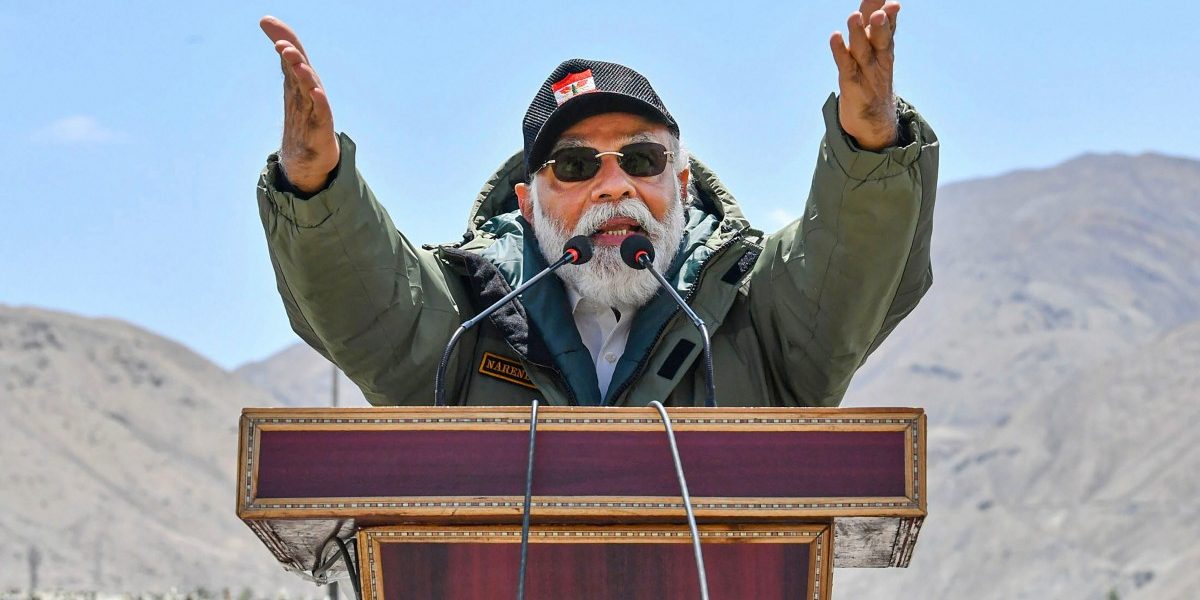 Independence Day came and went with Chinese soldiers still occupying Indian territory along the Line of Actual Control (LAC). It is about time the Modi government answers some serious questions.

In 1967, 1986 and 2013, Indian governments authorised the army to either counter-attack, escalate or, as in 2013, seize territory in Chumar in response to China’s Depsang incursion. The Modi government did take direct action in Doklam in 2017, but withdrew without adequate guarantees which resulted in Chinese control of the plateau.

In 2020, the Modi government seems to have been frozen into inaction.

In the wake of the 1962 defeat, India began a major military buildup and established seven new mountain divisions. This new capability was used five years later in Nathu La, Sikkim, where a series of border scuffles led to a Chinese ambush and an artillery barrage on 11 September 1967 that killed 88 Indian troops. The Indian Army responded with an artillery counterattack that inflicted even higher casualties on China, which then backed down. India’s ability to dominate the Chinese in Nathu La and nearby Cho La boosted army and national morale. 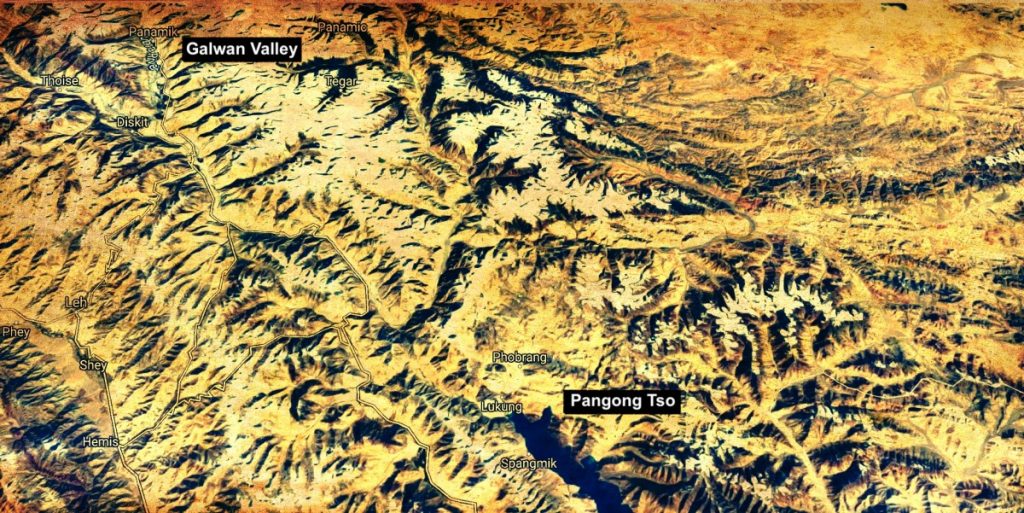 The crisis began when Indian patrols discovered an armed Chinese camp at the Thandrong pasture along the Sumdurong Chu river, which India claimed as part of Arunachal Pradesh. The Chinese turned down India’s offer of mutual withdrawal and Deng told the visiting US Defence Secretary Casper Weinberger on October 9 that China would “have to teach India a lesson”.

The Indian Army launched Operation Falcon, airlifting a mountain brigade to occupy the ridges overlooking Chinese positions and deploying two mountain divisions to the area. Strategic affairs analyst Colonel Ajai Shukla, who took part in the operation as a young officer, recalls: “We built up at such a rate and such intent and ferocity that the Chinese asked for a flag meeting.”

The government also took firm political measures. On 20 February 1987, Rajiv Gandhi granted statehood to the union territory of Arunachal Pradesh – which China claims as “South Tibet” – strengthening its bond with India (sharply contrasting with the opposite result that has flowed from the Modi government’s changes in Jammu and Kashmir).

During this period, the armed forces conducted deployments against China and Pakistan, mobilising forces by land, sea and air to signal India’s will to fight a two-front war. On 3 March 1987, Rajiv Gandhi offered China an olive branch, telling parliament that “we want a peaceful settlement of the border issue.” The rest is history.

China’s 21st century rise started to unravel this equilibrium. In response to growing Chinese power, Prime Minister Manmohan Singh in 2006 decided to shift from a defensive to an assertive stance on the northern border. He approved the construction of 73 strategic border roads concentrated in areas where perceptions of the LAC differed. The government raised two new mountain divisions and stationed armoured units in Ladakh and Arunachal Pradesh. It activated forward airfields along the LAC and deployed longer-ranged Su-30MKI warplanes to face China.

This build-up eventually produced a Chinese reaction. On 15 April 2013, a contingent of armed Chinese soldiers set up camp some 15 kilometres across the LAC at a junction known as the “Bottleneck”, close to the strategically-important Daulet Beg Oldi airfield, the same area where Chinese troops are parked today. But at that time, a series of meetings resulted in a complete Chinese withdrawal three weeks later on May 5. 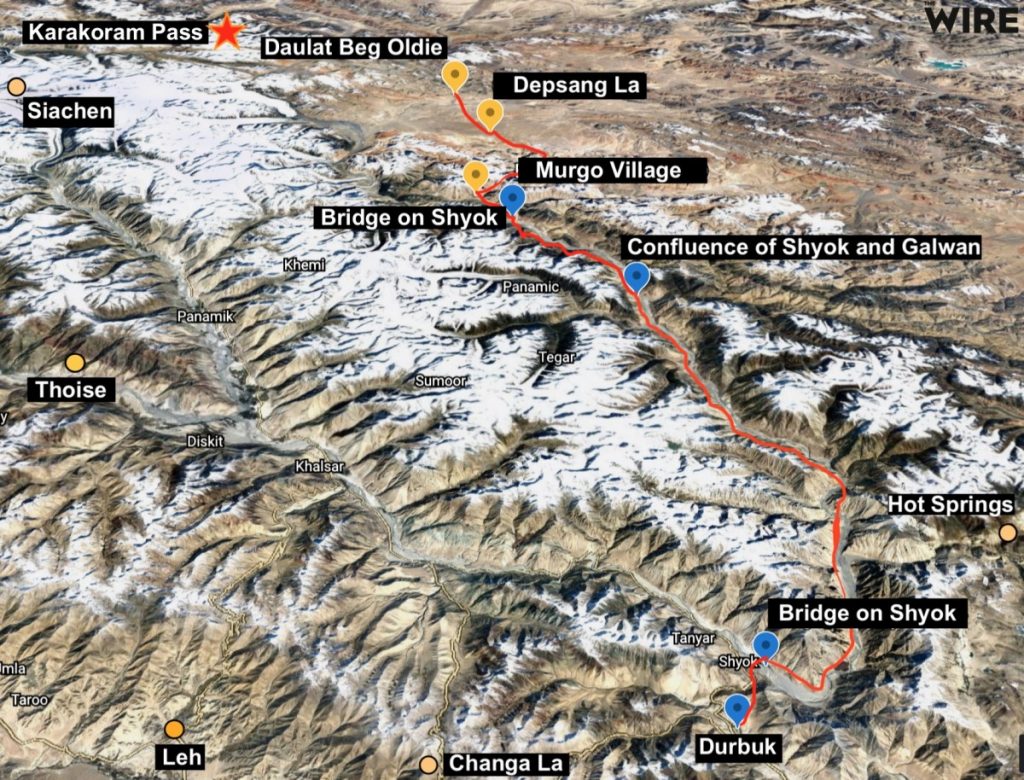 Sub-Sector North: Map of the road from Durbuk to Daulat Beg Oldie. Image: The Wire/Google Earth

In spite of this, commentary at the time was mostly negative and painted the UPA’s response as weak. The BJP went further, and submitted a memorandum to President Pranab Mukherjee on 3 May, describing the government’s actions as “unforgivable pusillanimity”. Then-CM Narendra Modi’s tweet on 13 May: “China withdraws its forces but I wonder why Indian forces are withdrawing from Indian territory?” – unwittingly sums up the situation today.

The irony is that, unlike Modi, the UPA actually made a counter-intrusion to force China’s hand.

Only a year prior, a group of academics and former policymakers had produced a report titled “Nonalignment 2.0” that laid out a 21st century grand strategy for India. The report stated that “the better way of responding to limited land-grabs by China is for us to undertake similar action across the LAC: a strategy of quid pro quo.”

According to several authoritative sources, this is precisely what the UPA did one year later in response to China’s Depsang incursion.

In an June 18 podcast with historian Srinath Raghavan, Ashley Tellis, Senior Fellow at the Carnegie Endowment, reminded us of the UPA’s aggressive response when he asked: “Can India do to China what China did to India, as India did in Chumar in response to Depsang? Which is go out and claim salients of Chinese territory and occupy it?”

On July 12, Lieutenant General K.T. Parnaik, the then commander of the Indian Army’s Northern Command, said that timely early warning would “enable us to deploy at our perceived LAC to check ingress, while we simultaneously resort to a quid pro quo, as we did during the Depsang intrusion in 2013. Early response creates leverage.”

An early response is necessary but not sufficient. With the Modi government’s stop-start intervention in Doklam, China “learned the lesson that as long as the Indian government could walk away with a propaganda victory, they could actually make gains and change the outcomes on the ground,” former National Security Advisor Shivshankar Menon stated on July 11.

Each crisis is different, and what worked in 1986 or 2013 may not work in 2020. The 2020 episode is marked by multiple ingresses and China is clearly taking bigger risks in pursuit of its objectives. The coronavirus is a new and unpredictable factor.

But Indians fed on a diet of military triumphalism for the past six years deserve to know why their government fumbled in its early response to China.

The answers certainly won’t come from India’s strategic commentariat that pilloried the UPA’s 2013 success and has made excuses for the Modi government’s 2017 and 2020 failures. Yet the contrast is clear, for those who choose to see.

Amitabh Dubey is an analyst and Policy Coordinator of the All India Professionals’ Congress. Views are personal.