Bullets Were Naxal But 23 CRPF Jawans Were Killed by Megalomania, Incompetence of Top Officers

The government needs to abandon its hubris and address those aspects of the Naxal problem which, by their very nature, do not lend themselves to military solutions. 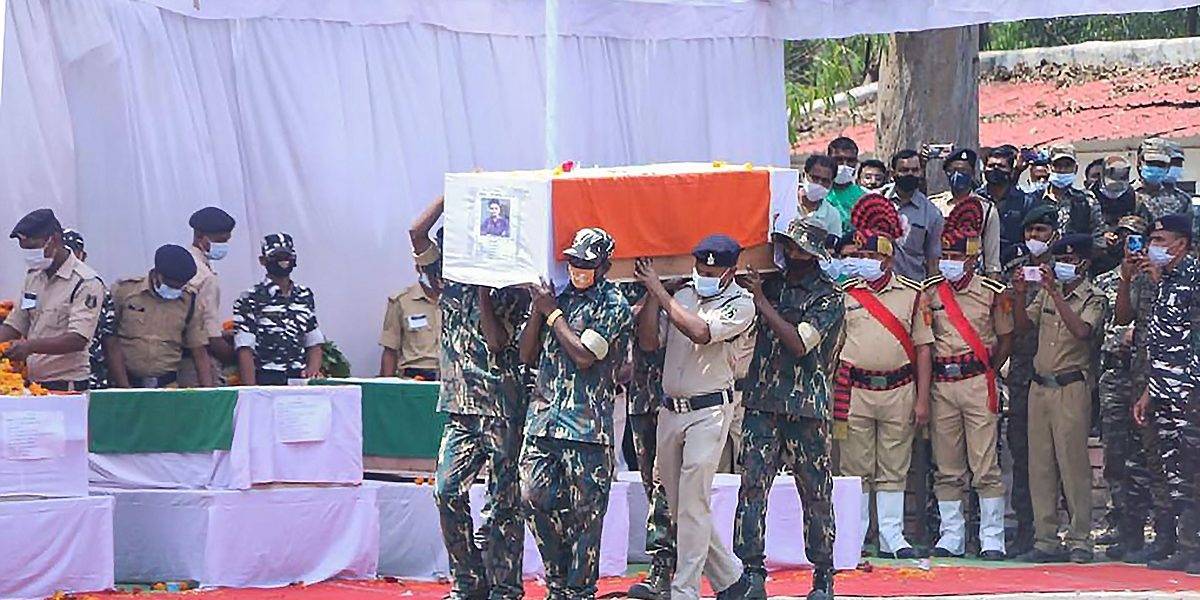 CRPF pays tribute to the soldiers who were killed in the Bijapur Naxalite incident, in Jagdalpur police line on April 5, 2021. Photo: @ChhattisgarhCMO/Twitter

Earlier this week, Maoist militants ambushed and killed as many as 23 men of the security forces who were part of a huge detachment sent out to kill the Naxal commander, Madvi Hidma. At least 31 men were wounded and one has been taken captive. The site of the ambush is not in any deep forest. Journalists were able to reach it in only half an hour from the main road.

According to media reports which have not been officially denied, the survivors abandoned their injured comrades and fled, returning only the next day to pick them up. Compare this with the inspiring words of Lieutenant Colonel Harold Moore of the US Army, when he famously declared to his troops before leaving for Vietnam, “I will leave no one behind!”

The forces have been able to recover the body of only Maoist combatant, even as they say that they had killed many more. Their claim that the Naxals carried away the dead bodies of their comrades in tractors does not inspire any confidence.

While casualties are expected in any combat, such disproportionately huge losses raise serious doubts about the merits of the planning and execution of the operation. Worldwide, counterinsurgency operations aim at a minimum kill ratio of 8:1 (that is, eight insurgents to one soldier killed), though conventional wisdom seeks a ratio of 10:1. Where are we in comparison?

A political slugfest started over a remark of Rahul Gandhi, and a retired DGP of J&K also pitched in with the hackneyed bogey of ‘disrespecting the forces’ for obvious motives. However, there is no running away from the fact that if this was not a poorly designed and incompetently executed operation, what else could be?

There have been a series of such disasters including Chintalnar, when the security forces lost 76 men in one incident. The government has lost 175 men in the past 10 years on the Dantewada-Sukma-Bijapur axis alone.

Senior officers must not be given a license to commit blunder after blunder in their megalomania, hubris and incompetence.

Officers who messed up

Though there is no official confirmation, two newspapers – Chhattisgarh Vaibhav and Dainik Bhaskar – have pointed out by name that one IG, one special DG of the CRPF and one retired DG re-employed as advisor (all from the IPS and based in Delhi) had been camping in the area for three weeks supposedly planning this grandiose operation. Never mind that in spite of planning at such high level, the operation bombed.

Dainik Bhaskar has blamed the IG rank officer from Delhi in particular, and has wondered how he was promoted, rewarded and given important responsibilities, notwithstanding his dubious record of blunders in the past, including the loss of 76 men at Tadmetla.

Official sources are expectedly silent about the operational details but we gather from media reports that a very large number of men (over 2,000 according to some reports and over 1,000 according to another) were dispatched into the jungle. On their way back, the Naxals ambushed the troops at a place and time of their choice, leaving little chance for them to defend themselves even as they fought valiantly. 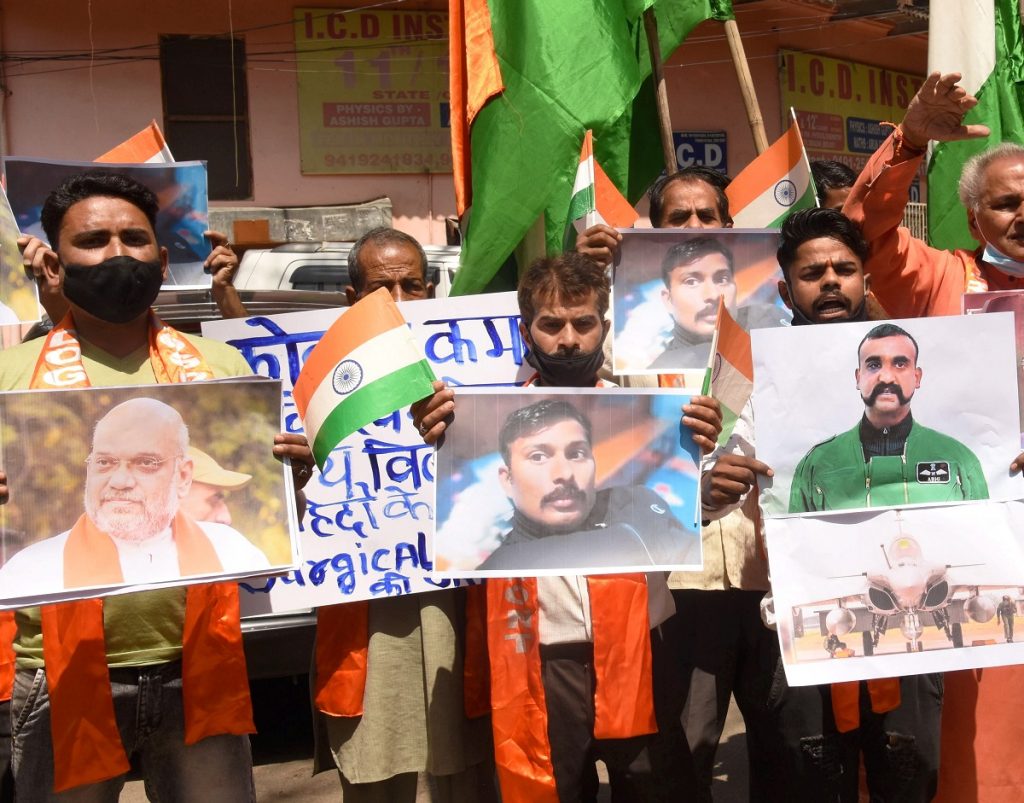 Activists of Shiv Sena and Dogra Front demand the release of CRPF commando Rakeshwar Singh Manhas from the captivity of Naxals, in Jammu, April 7, 2021. Photo: PTI

Inserting such a large number of men simultaneously in the jungle was a blunder. It was impossible to keep their movement secret to surprise the Naxals. Senior officers are now accusing the villagers of having tipped the Maoists off. This is a pitiable excuse. Have we not known for decades that the Naxals are adept at collecting information on the ground?

Second, the very fact that the forces were taken by surprise, proves that they had no intelligence about the Naxals, their numbers, and weaponry, not to speak of their likely planning.

This horror was not just a failure of intelligence; it amounted to sending the men into a ‘valley of death’ without any intelligence at all. This is not an error of judgement, but an act of criminal negligence.

The ambush took place just 6 km away from the nearest camp at Silger. It is also being said that a very large number of Naxals (claimed to be from 250-400 to 600) had ambushed the CRPF men.

This means that even though so many Maoist combatants were present so close to the camp, the security forces bosses from Delhi had no clue about this. If their intelligence failed even in that, what could be the so-called intelligence input on which they supposedly planned this huge operation?

Senior officers have the chutzpah to complain that the Naxals had sophisticated weapons; officers reportedly spoke of ‘light machine guns’ also. This is ridiculous beyond measure. Do they expect the Naxals to fight with lathis? If they were surprised by their weaponry, what sort of intelligence did the CRPF have? In any case, the security forces are not fighting with primitive weapons either.

The so-called grandiose planning of the operations is a massive farce. I am told by officers who did not wish to be named that all that they do in the name of planning is to chalk out a route on the map for going to certain points and coming back.

In this incident too, as media reports claim, the plan was to march to Alipuda and Jonaguda, 11 and 12 kilometres south of the Tarrem camp respectively. The bosses from Delhi imagined that the Naxal leader Hidma would be relaxing somewhere there a la Gabbar Singh of the film Sholay, only to be shot dead by the jawans.

The troops duly touched the designated points and found nothing there. Obviously, the so-called intelligence was a hoax.

One of the injured jawans has told the media that on their way back, while passing through Jhiragaon and Tekulguda, they found it very odd that the villages and their surrounding areas were deserted.

However, when they communicated this to senior officers, they were ordered to keep moving. The ambush exploded on them soon thereafter.

Finding nothing at the target places and then finding the villages deserted should have set off alarm bells. But not for the officers in charge.

This means that either they did not have the common sense to smell a rat or were so scared of the bosses from Delhi that they dared not apply brakes to the operation under any circumstance. The former speaks very poorly of their intellectual capacity, the latter of the sub-culture of ‘ruling by rank and not by competence’.

The sequence of events strongly suggests that the Naxals made a fool of the bosses from Delhi. It is evident that they might even have deliberately planted wrong information and the officers fell for it. Deadly combination of megalomania and hubris

Such ill-thought out operations result from the commanding officers’ megalomania, and their desire to please their equally megalomaniacal masters by finishing off the Naxals and Naxalism in one single ‘masterstroke’.

Deriving their limited intellectual inspiration from Tamil films like Peranmai or its Hindi-dubbed version, Kasam Hindustan Ki, they have been selling the myth of yet another masterstroke—the so-called ‘small-team operations’ in which they claim that a couple of super commandos would sneak into the jungles and kill a whole bunch of Naxals. Never mind that four men cannot have the firepower to last even half an hour of intense combat.

As ruthlessly dissected and exposed in the book Naxalism And Anti-Naxal Operations: Why The Nation Has Been Failing, the same megalomaniacs have also been selling other outlandish schemes of eliminating the Naxals by aerial strafing, setting fire to the jungles, planting wireless ‘bugs’ in every Adivasi household, following the ‘Gadhchiroli model’ or the ‘Andhra model’, covert operations, better coordination, liaison and synergy amongst various forces; and ‘eyes in the sky’, etc.

Culture of hushing things up

Internal or external inquiries which are held into such disasters are essentially formalities to silence critics. They are closely guarded secrets as their basic purpose is to save the favourites and find some scapegoat for punishment.

The nexus of IPS officers and their masters in the government ensures that the guilty officers are saved and eventually the blame is passed on to the poor men for not having followed the mythical, non-existent SOP (Standard Operating Procedure).

In fact, an SOP would be disastrous because every situation is different and there cannot be a one-size-fits-all type of response.

The reports of such farcical inquiries are never made available to the junior and middle-level officers. As a result, there is no opportunity of analysing and learning from mistakes.

Contrary to popular perceptions, there is no serious problem with the training of the men. The problem is in planning. It will be beyond the scope of this article to discuss the science of jungle combat here. However, interested readers may refer to my book, Jungle Warfare: An Ultimate Handbook.

If a ragtag band of some 10,000 poorly armed people has managed to survive the onslaught of lakhs of soldiers since 1967, it means that the strength of the movement does not lie in just a few brilliant leaders.

For years, the agencies harped on Muppala Lakshmana Rao @ Ganapathi (75) as the mastermind of everything the Naxals did. However, he retired in November 2018 and the Naxal movement goes on as ever. Shamefully, the intelligence agencies do not have any information on him in his retirement also.

This means that bombastic plans to eliminate certain leaders, as this latest plan was designed to do, would not dent the movement significantly. Anti-Naxal operations must therefore have limited objectives in the first place and no one should delude himself or the government that one huge operation will wipe them off the face of India.

As for intelligence, it is so deficient that even after 54 years; they have not been able to give any information on the most vital aspects of the movement, namely, their sources of finance, weaponry and recruitment.

The government is free to fight with more intensity, but speaking of a ‘victory in the end’ when you are dealing with your own people is an arrogant military metaphor that must be shunned. The government needs to abandon its hubris and address those aspects of the Naxal problem which, by their very nature, do not lend themselves to military solutions. A muscular approach does not work everywhere.

N.C. Asthana, a retired IPS officer, has been DGP Kerala, a long-time ADG CRPF/BSF and IG, COBRA. He tweets @NcAsthana.