Behind the Modi Government's Doublespeak on Ladakh, a Refusal to Acknowledge Reality

The Chinese know where they are and what they did. The government of India and the Army, too, are, hopefully, wiser after the event. The only ones who do not yet clearly know what transpired are the people of India. 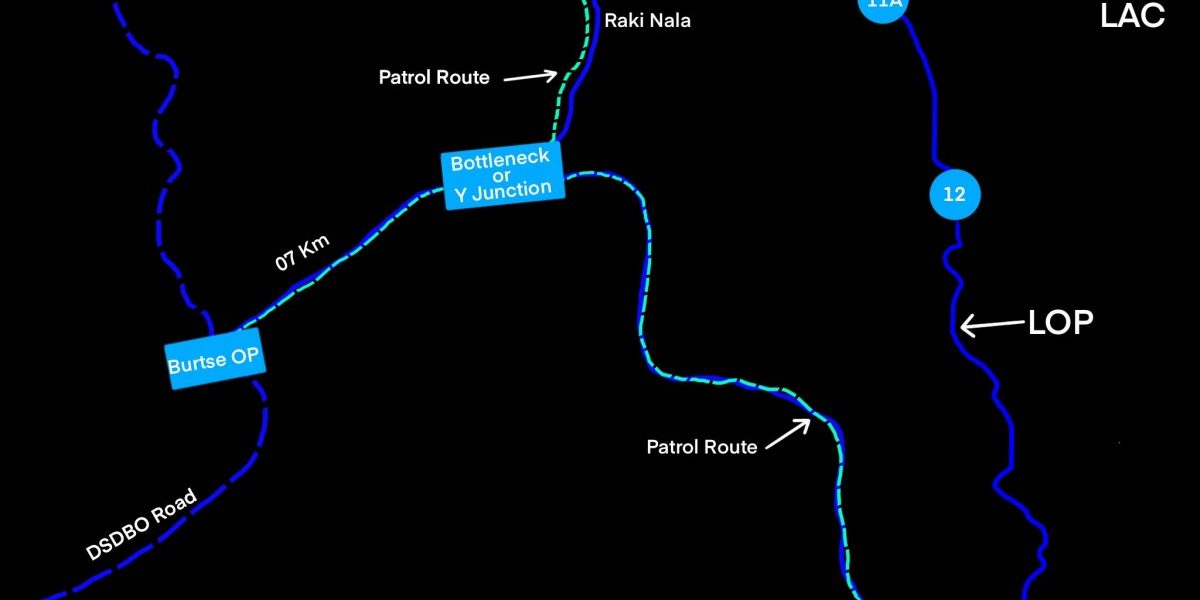 Reading the Ministry of Defence press release following the failed 13th round of talks between Indian and Chinese senior commanders, one may wonder what the Sino-Indian dispute in eastern Ladakh is all about.

Look at these sentences:

1. “The Indian side pointed out that the situation along the LAC had been caused by unilateral attempts of [the] Chinese side to alter the status quo and in violation of the bilateral agreements…

2. It was therefore necessary that the Chinese side take appropriate steps in the remaining areas so as to restore peace and tranquillity along the LAC in the Western Sector….

3. The Indian side emphasised such resolution of the remaining areas would facilitate progress in the bilateral relations….

4. The Indian side therefore made constructive suggestions for resolving the remaining areas but the Chinese side was not agreeable and also could not provide any forward-looking proposals….”  (Emphasis added all through)

From the above, one would not learn that the PLA had, in the summer of 2020, surprised the Indian Army all along the Line of Actual Control in eastern Ladakh and occupied positions on or across the LAC which have denied the Indian forces access to large chunks of territory they had earlier patrolled.

After all, if the Chinese only made unilateral “attempts” to alter the status quo, in simple English it means that they did not actually succeed. But if those Chinese “attempts” did not succeed, what does it mean to talk of “appropriate steps” that the PLA needs to take? What is the issue of “resolution of remaining areas” or, for that matter, the  “constructive suggestions” that the Indians side made which the Chinese have rejected as “unreasonable and unrealistic”?

Surely the only “constructive suggestion” that can be offered is for the Chinese to pull back. But then why not say so? Why this obfuscation ?

Some claim that this is for diplomatic reasons of not wanting to name and shame the Chinese, so that they can be persuaded to pull back. Others declare that governments have to keep issues relating to the border confidential.

But let’s get this in the right order: The Chinese know where they are, and the parts of the LAC they have crossed, and so, of course, does the Indian government. So, the only people from whom the information is being kept are the people of the country. As for being sensitive to Chinese concerns, well good luck to that policy.

From the outset, the government’s stand on recent developments in eastern Ladakh have been bizarre and downright mendacious. It originated at the very top when Prime Minister Modi declared on June 19, 2020  – four days after the deadly events in the Galwan Valley that took the lives of 20 Indian jawans and led to some Indian soldiers being taken prisoner by the Chinese – that “neither is anyone inside our territory nor is any of our post captured.”

In fact, some unconfirmed social media posts doing the rounds this week  suggest things may have been  worse for India in the Galwan incident than has been so far acknowledged

As Modi’s remarks led to a controversy, the government quickly clarified that his statement related to the immediate situation in Galwan, not to what may have transpired earlier or for that matter elsewhere in Ladakh.

The statement did note that “that this Government will not allow any unilateral change of the LAC”, yet, it completely ignored the wider issue of the PLA’s sudden ingresses and actions that denied Indian forces the right to patrol parts of the LAC that both sides had hitherto patrolled. There were five such areas, north to south: the Depsang plains, Galwan, Kugrang river valley, north bank of Pangong Tso and Charding Nala near Demchok.

Needless to say, similar prevarication featured in the first authoritative statement on the developments in eastern Ladakh which came in parliament from Defence Minister Rajnath Singh in September 2020. He, too, fudged the issues. He said that in early May “the Chinese side had taken action to hinder the normal, traditional patrolling pattern of our troops in the Galwan Valley area.” An effort was made to address the issue through local commanders, but by mid-May, the Chinese began “several attempts to transgress” the LAC in other areas like Kongka La, Gogra and the north bank of Pangong Tso.”

So, “attempts” had been made and, presumably they were not successful. He conveniently ignored the important areas in Depsang, Kugrang river Valley or the Charding  Nala area, where the Chinese remain deployed and are the subject of the current senior officers’ talks.

By far the most serious Chinese ingress has been in the Depsang area (see map below). The Chinese have created a blockade at Y Junction as a result of which Indian soldiers who routinely patrolled the areas marked by Patrolling Points (PP) 10, 11, 11a, 12 and 13 have been prevented from doing their task. Reports suggest similar restrictions to the north of this area as well.

Daulat Beg Oldi (DBO) is India’s northernmost post, short of the Karakoram Pass. It is also the terminus of the Darbuk Shyok-Daulat Beg Oldi (DS-DBO) road. As can be seen from the map, Indian forces have been denied access to a huge area which provided defence to the road. Conversely, the Chinese presence near the road threatens Indian deployments in DBO. 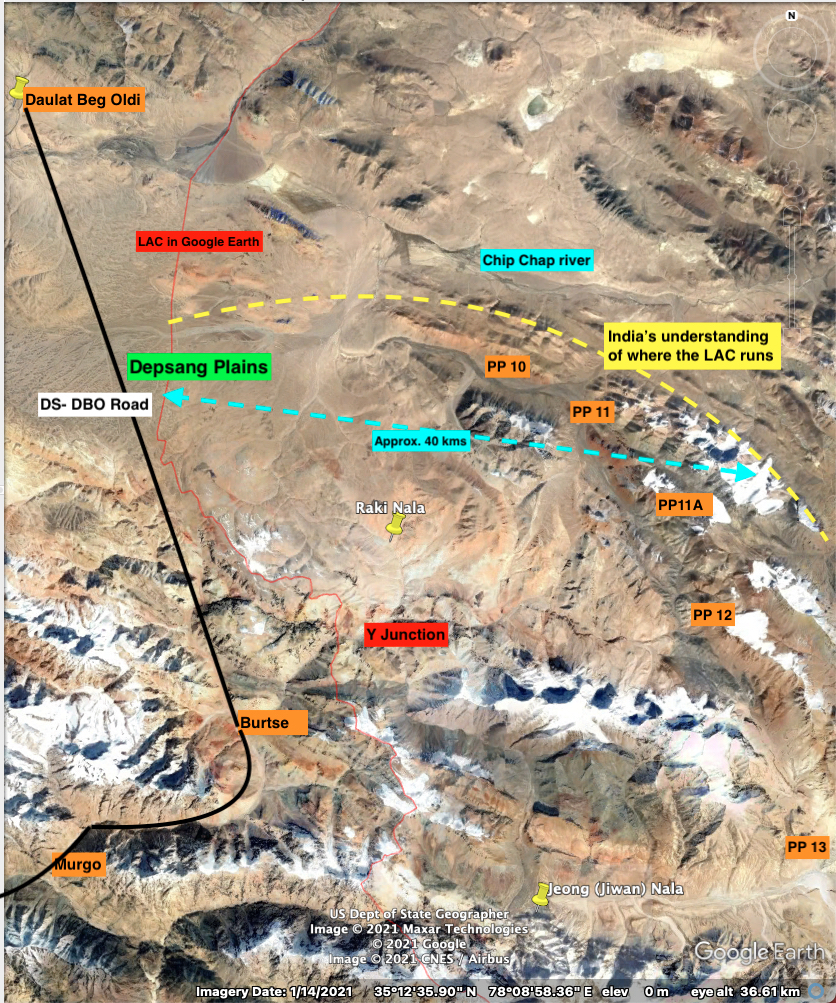 Most recently this fudge is evident in External Affairs Minister S Jaishankar’s speech  at the India Today Conclave in early October 2021.He  said the Indian side still had no clear idea of the Chinese motives. “If attempts are being made to unilaterally change the LAC status quo and large forces are brought to the border in contravention of written agreements, then obviously the relationship will be impacted.” He said that while there had been progress in reversing the situation, “the larger problem remains which is a very sizeable Chinese force close to, if not at, the LAC.”

Nowhere is there an acknowledgement that what happened was not mere “attempts” to change the LAC status. Like it or not, the Chinese side had changed it by force and the action was not “close to the LAC” but in some instances across it. And that is what the talks with China, including his own repeated discussions with his counterpart Wang Yi were all about.

The saddest part of all this is that the Army brass, too, is going along with the government. No doubt, this is aimed at hiding their own culpability in lowering their guard last year. But take, for example Lt Gen Y.K. Joshi,  the northern army commander’s assertion that the situation in Depsang, by far the most serious, is a “legacy issue”, meaning it had unfolded before the 2020 events. Recall here that the Chinese have established a blockade at a key point that is preventing Indian patrols from surveilling several hundred square kilometres of territory.

The response to Joshi’s claim came from Lt Gen (retd) R.K. Sharma. Writing for the pro-government Vivekanand Foundation of India, he rejected this “legacy issue” argument, noting that 8-10 patrols a year had visited the area between 2013-2019. Sources say that the last Indian set of Indian patrols actually took place in February 2020.

The Chinese are not misled by all this. They know where they are and what they did. The government of India and the Army, too, are, hopefully, wiser after the event. The only ones who do not yet clearly know what transpired are the people of India who have been treated to this double-speak where the bravery of soldiers is praised to the skies even as those who should have been more vigilant get away scot free. This is similar to the Kargil incursion where again, soldiers paid the price, a great victory was declared, while nobody was held accountable for the intelligence failure.

Fortunately, at least in the case of eastern Ladakh, a fictitious narrative of victory has not been fabricated, at least as of now, though Modi’s June 19, 2020 statement comes close to it.

The government seems to have embarked on a peculiar course of information denial and manipulation with regard to events in eastern Ladakh. This, despite the sorry history of the tragic consequences of a similar policy followed by the Nehru government in the 1950s. Open societies have long known of the value of an informed citizenry. They do not believe that “bad” news  is “anti-national”.  On the contrary accepting setbacks is the best and perhaps only way to set things right.