Last week, a MiG-29KUB trainer operating off INS Vikramaditya crashed into the Arabian Sea – the fourth accident since 2018 involving the Indian Navy’s fleet of MiG-29K/KUB fighters and trainers. 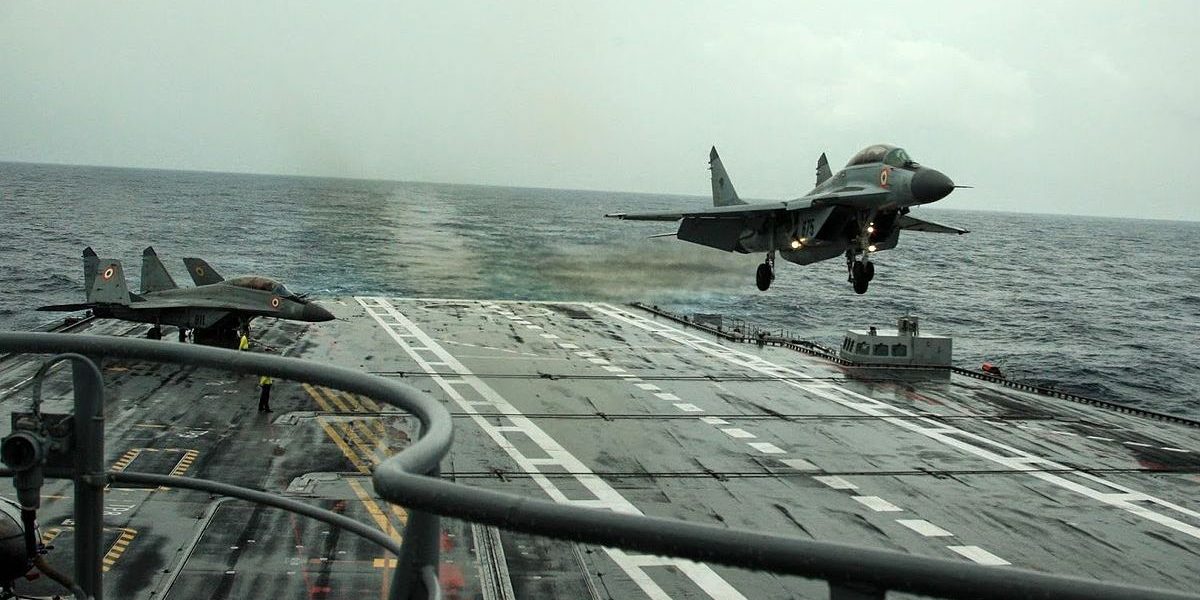 Chandigarh: An Indian Navy (IN) MiG-29KUB trainer operating off INS Vikramaditya, the force’s sole aircraft carrier, which crashed into the Arabian Sea on November 28, was part of a fleet of 45 similar Russian fighters that have been problematic ever since their induction into service from 2009.

One of the two pilots on board the tandem-seat trainer was rescued, whilst IN surface and air units are still searching for Commander Nishant Singh, a qualified MiG-29K instructor, in the waters off India’s west coast.

The twin-engine trainer-fighter was returning to its base at INS Hansa in Goa after participating in the two-phase Malabar 2020 exercises in the Bay of Bengal and the Arabian Sea that concluded on November 20. These manoeuvres included the Australian, US and the Japanese navies and is known as the Quadrilateral grouping, or simply the Quad.

Official sources said no distress call was seemingly raised by either of the two pilots of the ill-fated platform; an investigation has been launched into the accident, which is the fourth since 2018 involving the IN’s fleet of MiG-29K/KUB fighters and trainers.

In February 2020, a single-seat MiG-29K had crashed whilst on a routine flight from its base at INS Hansa in Goa, and three months later a MIG-29KUB trainer was involved in an accident following a bird strike. Earlier, in January 2018 a MiG-29K had crashed after veering off the runway at Hansa, leaving a total of some 41 of 45 platforms in operational service presently, almost half of which are kept in reserve.

The IN had originally acquired these 45 MiG-29K/KUB platforms between 2004 and 2010 for $2.29 billion as part of the air arms of Vikramaditya and INS Vikrant, the under-construction carrier, scheduled for commissioning around 2022 – principally because of their commonality with the Indian Air Force’s 60-odd MiG-29 fighters, inducted into service from 1985.

Russia, which at the time was refurbishing Vikramaditya (ex-Admiral Gorshkov), the 46,000 tonne Kiev-class carrier astutely reasoned that indigenously available technical support and associated logistics for spares and maintenance for the IAF’s MiG-29s would support the IN’s MIG-29K/KUBs.

India’s procurement revived Mikoyan’s flagging MiG-29 naval variant programme, rendering the IN as Russia’s sole overseas customer for the MiG-29K/KUBs. The Russian Navy, for its part, operates merely 20 MiG29K’s and four KUB trainer versions or almost half of those in service with the IN.

However, military sources said that the IN’s 45 Russian fighters – 16 earmarked for Vikramaditya and 29 for Vikrant – which were delivered to the IN between 2009 and 2017 had failed in ‘adequately meeting’ the navy’s operational requirements, as they were reportedly unable to deliver their weapons payload to their stated range with a full fuel load.

Also read: What India Must Watch Out for While Negotiating Defence Contracts With Foreign Vendors

In its July 2016 report India’s Comptroller and Auditor General (CAG) had severely criticised the IN for technically accepting the MiG-29K/KUB fighters, despite them being “riddled with problems, discrepancies, and anomalies”.

In its excoriating audit presented to parliament, the CAG revealed that these deficiencies included shortcomings with the naval fighter’s airframe, its RD-33 MK engines and fly-by-wire systems; in short, the entire fighter. The report also stated that the fighters had suffered repeated engine failures, with at least 10 cases of single-engine landings. Of the 65 RD-33MK turbofan engines received from manufacturer Klimov, the IN had rejected or withdrawn at least 40 from service.

The CAG also noted that carrier compatibility of the MiG-29K during deck operations were yet to be fully proven and multiple modifications were being effected to liquidate defects, which the IN claimed had since been ‘more or less’ executed. One of these included ‘ruggedisation’ of the fighter’s fuselage, but differences between the IN and the OEM-Mikoyan led to a stalemate that is believed to have only been partially resolved, industry sources said.

Consequently, operational availability of the MiG-29Ks between 2014 and 2016 fluctuated from 15.93% to 37.63%, while that of the MiG-29KUB trainers was between 21.20% and 47.14%, the CAG disclosed. The report also revealed that these technical deficiencies would considerably reduce the MIG-29K’s overall service life of 6,000 hours and that even its full-mission simulator had proven “unsuitable” in training pilots for carrier operations. 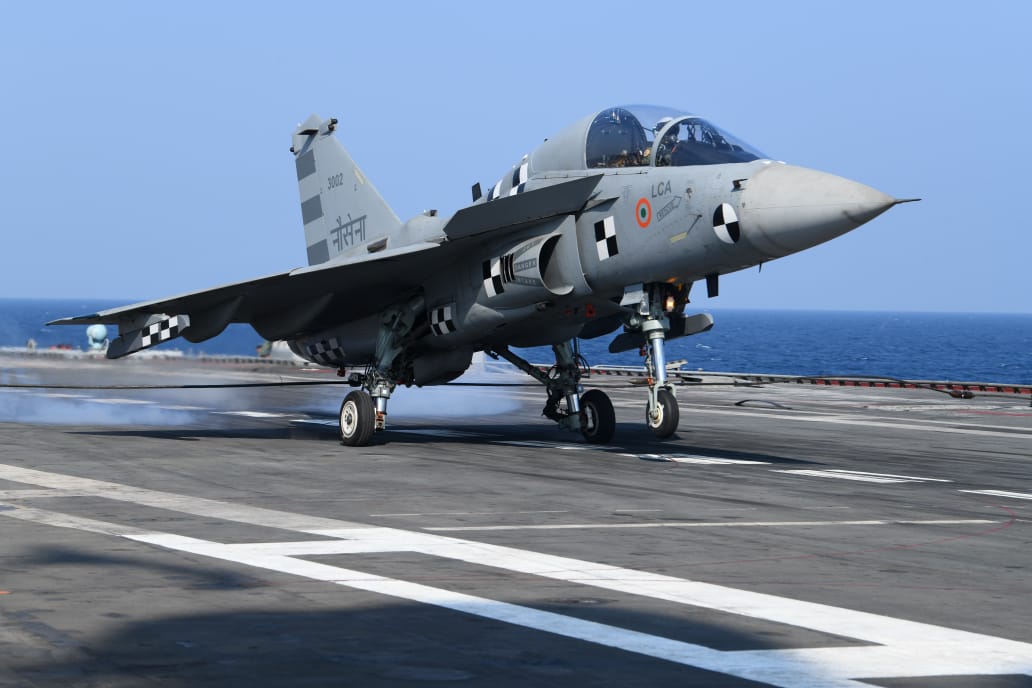 Prototype of the naval light combat aircraft on the deck of the INS Vikramaditya aircraft carrier. Source: DRDO

Additionally, the MiG-29K/KUB fleet continued to face severe maintenance problems, as a large number needed repair after each deck landing that damaged many of the fighters on board components. There were also complaints from the IN regarding Russia’s inability to incorporate all agreed-upon features onto the MiG-29Ks. This resulted from the 2014 sanctions, still in place, imposed on Moscow by the US, European Union, and other international organisations for its military intervention in Ukraine, which had been contracted originally to provide several of the MiG-29K components.

Since Russia was consequently unable to integrate these systems and subsystems onto the fighters, the IN was left with little choice but to import them directly from Ukraine. These were then integrated onto the fighters at the Hansa Indian Naval Air Station, where the first batch of 16 MiG-29K/KUBs were formally inducted into service in May 2013 as part of the 303 Black Panthers squadron, but with limited assistance from the OEM. Industry sources said this aspect too had adversely impacted the fighters’ overall efficiency, but the IN declined to officially comment on the matter.

For its MiG-29s the IN has opted for the more commonly used Vympel NPO R-77 (NATO: AA-12 ‘Adder’) as its primary beyond-visual-range air-to-air weapon. It is believed to be in the process of cross-decking and integrating the Israeli Rafael Advanced Systems Derby missile, 20 of which were acquired in 2005 for $25 million to arm the navy’s Sea Harrier fleet that was retired in early 2017.

The MiG-29K’s 13 hard points are capable of delivering a 5,500-kg combat payload, including a range of laser and electro optically guided free-fall bombs, and air-to-surface and anti-ship missiles. The fighter also carries Kh-35 and Kh-31A air-launched anti-ship missiles, but its overall ordnance delivery capability is supposedly compromised due to its excessive weight, official sources said.

The MiG-29Ks undercarriage track is widened and capable of ‘buddy’ refueling other aircraft. The MiG-29KUB, like the one that crashed recently is intended for pilot training, but is capable of executing combat missions like the single-seat MiG-29K. However, what remains inexplicable is why the IN, responsible for all technical aspects of such acquisitions, were unable to anticipate the operational and technical problems inherent in the MiG-29K/KUBs.

The IN’s unsatisfactory experience with Russian fighters and delays in the development of the indigenous light combat aircraft (Navy) or LCA (N), led to the navy issuing a request for information (RFI) in January 2017 for 57 multi-role carrier borne fighters (MRCBFs) in fly-away condition for the aircraft carrier.

The tender for the MRCBFs was scheduled to have been dispatched by end 2019, deferred from the earlier mid-2018 deadline. But like many other Indian materiel procurements there is a corollary that is linked to the IAF and similar to the one that led to the MiG-29K purchase some 16 years ago.

In April 2018, the IAF had issued an RFI for 110 fighters: 17 of which will be procured from imports, with the remaining 93 to be license built by a joint venture between the shortlisted original equipment manufacturer (OEM) and an Indian private sector manufacturer. Of the six vendors that responded to the IAF’s RFI, four had earlier offered their maritime variants to the IN: Boeing (US), Rafale (France), Russian Aircraft Corporation, and Saab (Sweden).

“It makes eminent financial and logistical sense for the IN to link its MRCBF buy to the IAF’s,” said a retired three-star IN aviator. Simply acquiring 57 naval fighters off the shelf, he warned, would be prohibitively expensive, impractical, and time consuming.