At a time when we are being told the scrapping of Article 370 is the best thing to have ever happened to the fight against terror, the spectacle of a senior police officer escorting a wanted terrorist to his next mission is really hard to swallow. 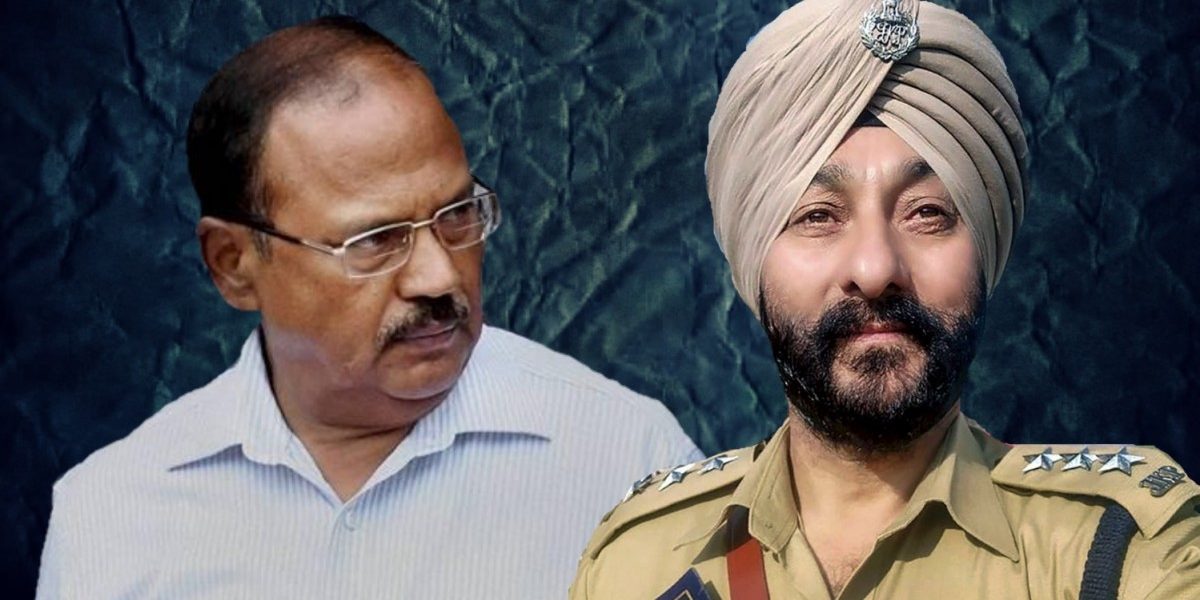 Without a doubt, the arrest in Kashmir of Deputy Superintendent of Police Davinder Singh as he was escorting two suspected militants in a car along the Srinagar-Jammu highway, en route to Delhi, has to be one of the biggest stories on the national security front in months, if not years. And as the man who advises the prime minister on national security, Ajit Doval, I’m sure, has been thinking of nothing else the past 48 hours

Singh was arrested on Saturday with Naveed Baba and Altaf of the Hizbul Mujahideen. The fourth person in their car was a lawyer of sorts, whom the Jammu and Kashmir Police are describing as an OGW, or overground worker of the militants. The police say they also recovered weapons from the car; subsequently, they raided various premises linked to Singh and made further recoveries or arms.

In a press conference on Sunday, the inspector general of police, Kashmir, Vijay Kumar, said Davinder Singh was being treated like any other terrorist and would be booked under the Unlawful Activities (Prevention) Act. Now, there is talk of the National Investigation Agency – which is the Centre’s primary anti-terrorism wing – taking over the investigation.

The reason I believe Davinder Singh’s arrest is a really big deal is because there are no benign explanations for his presence in a car with wanted terrorists.

Something rotten has just been exposed to the harsh glare of the winter sun – of that there is no doubt – and the only question on everyone’s mind is just how deep this malignancy runs.

Every institution has rotten apples and we all know the police force in India has more than its fair share of them. Predictably, this is the line the JKP itself, and the wider security and intelligence establishment, are taking following Singh’s arrest. It is much easier to point a finger at a ‘rogue element’ than to invite questions about the institutional ecosystem which produced him and allowed him to thrive for decades.

The reason Davinder Singh’s arrest has sent shock waves up and down the security establishment is because this was not the first time his connection with terrorists has cropped up.

Also read: Davinder Singh Arrest Raises Many Questions. How the NIA Handles It Could Raise More.

Twenty years ago, in 2000, when Singh was a junior officer working his way up the ranks in the JKP’s special operations group – or special task force (STF) as it was also called – he apparently tortured a former militant named Afzal Guru, extorted money from him and then got him to do a small job.

This was the same Afzal who was eventually hanged – in 2013 – for having been a part of the terrorist conspiracy to attack India’s parliament in December 2001.

In an undated letter to one of his lawyers written while he was in Tihar Jail, Afzal spoke about how  Davinder Singh and another officer, DSP Vinay Gupta had tortured him at the STF camp in Hamhumma near Srinagar. At the time, he ended up giving them Rs 80,000 and his scooter. But at some point late in 2001, he had another meeting with Davinder, a meeting which, if he was telling the truth, ended up costing his life. This is what Afzal wrote:

“D.S. told me that I had to do a small job for him that has to took one man to Delhi as I was well aware about Delhi and has to manage a rented house for him. Since I was not knowing the man but I suspected that this man is not Kashmiri as he did not speak in Kashmiri but I was helpless to do what Davinder told me. I took him to Delhi. One day he told me that he want to purchase a car. Thus I went with him to Karol Bagh. He purchased the car. Then in Delhi he used to meet different persons and both of us he, Mohammad, and me used to get the different phone calls from Davinder Singh.”

The ‘Mohammad’ whom Afzal said Davinder had asked him to take to Delhi ended up being one of the five terrorists who shot their way into the parliament precincts on December 13, 2001, killing nine people before being gunned down.

A probe that was never done

Now, we have no way of judging the veracity of what Afzal wrote and I dare say there is no reason to believe what a condemned man will say in an attempt to save his own life. The judge who convicted Afzal now insists that even if this allegation is true, it would not have changed the verdict he handed down. But serious intelligence agencies are not supposed to work that way. Israel’s Mossad, for example, follows the ‘tenth man strategy’ – if nine people in the agency believe a particular story, it’s the duty of the tenth to try and disprove it. Now, the STF in Kashmir was notorious for being corrupt and someone in the Indian intelligence community ought to have sat up and said, “Hang on a minute, Afzal has said something awful about Davinder Singh. He’s probably lying, but we need to check it out!”

Sadly, no one did anything. Could it be because of the usual Indian inefficiency and inertia? But then we are talking about the most spectacular terrorist incident to have taken place in the capital city! Surely the system would not have been so casual.

So could it be because the STF was seen as operating on the frontlines of the fight against terrorism in Kashmir and pointing a finger at a DSP or even asking questions would have ended up ‘demoralising’ the good men in uniform? Perhaps.

Or could it be that the intelligence and security brass knew Davinder had not acted alone and for a few rupees – that he was part of some wider operation which obviously went horribly wrong and needed to be covered up? I’m not talking about what is called a “false flag operation” – I find the idea that Indian agencies staged the parliament attack utterly implausible – but something quite different. We know that intelligence agencies around the world infiltrate terrorist groups and sometimes even lure them into what they hope will be a trap. But a game that the agencies play can, and is, also played by the terrorists, and what was meant to be a trap can end up hitting the wrong target. At which time, the preferred strategy is to batten down the hatches and pretend nothing went wrong.

The fact is that we simply don’t know why Afzal’s allegation against Davinder was never investigated. What we do know is that the failure to investigate his charge was a lost opportunity to see if there were others also involved in the plot, other weaknesses in the system. And this is no way the fight against terror can ever be won.

The argument I am making is not a moral or humanitarian one. I’m also not saying we need to look for a political solution, though obviously sensible politics does help. Instead, I’m arguing that there is something fundamentally wrong with the way the Indian security and intelligence establishment is going about fighting terrorism. The system is content to go after footsoldiers like Afzal and throw the book at them, largely for the political optics this serves. Or even target completely innocent people like the five Kashmiri civilians who were abducted and murdered by the Rashtriya Rifles at Pathribal in 2000 and then passed off as the Lashkar terrorists responsible for the murder of 35 Sikhs at Chattisinghpora. What this approach means is that often the real killers are never identified and hunted.

Even if we go along with the ‘rogue element’ theory, the official indulgence shown to individual police or army officers who break the law – in the belief that the persons they torture, kill or extort money from are all just “bad guys” – creates a culture of permissiveness in which the state and the country can and do end up becoming victims.

The fact that Davinder Singh, like many other STF personnel, had accumulated a lot of property should have sent alarm bells ringing but it didn’t. The fact that his subordinates had a proven track record of torture should have been red flagged but instead became a factor in his promotion. The fact that he confessed on a news channel to having tortured Afzal should have led to his prosecution, instead he flourished!

When the allegations of his corruption mounted, he was eventually sidelined but then rehabilitated and posted in a sensitive location – first Pulwama, then Srinagar airport. Irony of ironies, he was at hand to receive and escort 15 foreign ambassadors during their conducted tour of Srinagar earlier last week, including US ambassador Kenneth Juster. And then, a few days later, he is caught escorting a dreaded terrorist out of Kashmir for an unknown mission.

Why was Davinder helping Naveed come to Delhi, that too on the eve of Republic Day and the assembly elections? We don’t know. It’s easy to say “money” but the figure of Rs 12 lakh being mentioned – if true – is a sorry commentary on the state of India’s so-called war on terror. The fact is that there was a reward of Rs 20 lakh for the capture of Naveed – who is suspected of having killed around a dozen Bengali and Bihari labourers in rural Kashmir last year – so, no, I am not inclined to accept the theory that DSP Davinder Singh was running his high class escort service for a little bit of money.

There are probably others who are part of his ring, and their goal, I suspect, is not to generate some earnings on the side. I think the JKP suspected there was more to Davinder’s activities than meets the eye and they mounted this operation on their own steam without letting the wider security establishment in on their plans.

Now we are told the NIA is likely to take hold of the case. I sincerely hope they do not, because their track record is nothing to write home about. The last thing India needs is a cover-up or a botched investigation – of the kind NIA chief Y.C. Modi ran when he was in the CBI and put in charge of the Haren Pandya assassination. This is a story in which the government needs to err on the side of excessive transparency.

India never tires of telling the world that the most important global issue is terrorism. It was bad enough that Prime Minister Narendra Modi and NSA Ajit Doval sent an accused terrorist like Pragya Thakur to parliament. The world went along with that bizarre choice of theirs. But at a time when we are being told that Kashmir is on the mend – that the scrapping of Article 370 is the best thing to have ever happened to Kashmir and the fight against terrorism – the spectacle of a senior police officer helping a wanted terrorist move on to his next mission is really, really hard to swallow.