The new recruitment scheme will slowly change the character of the army and also provide well-trained 'non-state actors' to further the political agenda of the ruling Parivar.

PM Narendra Modi. In the background is a train anti-Agnipath protesters set on fire. Photos: PTI and Reuters

In eight years as prime minister, Narendra Modi has made surprise his favoured tool for reinforcing his hold on power. He did this in September 2020 with the farm law amendments. With Agnipath, he has done it again. Its government claims that it is a “transformative military reform”. Supporters say it had become necessary to limit skyrocketing pension liabilities that were preventing the acquisition of modern weaponry. BJP leaders also claim that the 75% of Agniveers who are discharged will return to civilian life imbued with discipline and a sense of national purpose. The country will gain from this.

If that is so, then why has it been met with a storm of protest? Why are the youth of the country, whom it is supposed to benefit, its main opponents? Why is the protest most fierce, and sustained in, Bihar, UP, Madhya Pradesh, Haryana, and Rajasthan? Are these not precisely the states in which the BJP is in power, or has established a firm presence in the past seven years?

In an attempt to mollify them, the government has announced, in rapid succession, an immediate induction of 46,000 ‘Agniveers’ into the army this year, its extension to the Navy and Air Force, and there is talk of its extension to the Central Armed Police Forces, which include the BSF and the CRPF. Since there are 1.3 million persons in the CAPFs against 1.4 million in the armed forces, this will lead to a doubling of the annual recruitment of Agniveers.

But the youth have not been mollified, and the protests have continued – because the government has not answered the question that has been uppermost in every young person’s mind for more than a decade: “What will our future be? Do we even have a future? How long will our parents be able to support us? Will we be able to marry? And if we do, how will we survive?”

The protest that Agnipath has triggered is not born out of anger but desperation.

Their desperation, in turn, is born out of the scheme’s temporariness. In the current recruitment system, being selected to join the Army ends the recruit’s search for a secure livelihood and anxiety about his, and his family’s future. The Agnipath scheme will not only destroy this secure future, but be the beginning of a new, even more severe insecurity. For four years, every recruit will be forced to ask himself – what he will do if he is among the 75% that get rejected. To this silent fear, apart from offering the ejected agniveers around Rs 15 lakh in termination emoluments, the government has given no answer.

Within the Army, the Agniveers will be seen as interlopers. The Indian Army is composed of units that trace their ancestry back to kingdoms that existed hundreds of years ago, and from among whose soldiers the British created their Indian army. When India’s jawans go into battle they do so in the name of the units to which they belong. These units flaunt their identities, many of them ethno-national – Rajputs, Sikhs, Marathas, Gurkhas, Jammu and Kashmir, Madras, and so on. The Madras regiment is so old that it has outlived its name. But so strong are its traditions that no one has dared to suggest changing it. The existing recruitment system has carefully preserved this tradition by being primarily local.

This is the system that the government wishes to replace with a recruitment system that, it openly boasts, will be “transformative” because the recruitment of its ‘Agniveers’ (as opposed to the Army’s jawans, the Navy’s sailors and the Air Force’s airmen), will be on an “All-India basis”, and the existing system “shall cease to exist”.

It is into this army – whose jawans take as much conscious pride in their language and culture as as they do in being the guardians of a grander, but more abstract “India” – that Narendra Modi’s government wants to add the Agniveers, 50,000 at a time, like drops of alien fluid in a litmus test to see if the colour of the pool will change. And, as if to make sure that the Agniveers will not be readily accepted by the regiments into which they have been inducted, it intends to make them wear distinctive badges on their arms. It is hardly surprising, therefore, that retired army officers are unanimous in their opposition to the scheme.

What is the government’s purpose in making such a radical change at the very core of its security system? According to Agnipath’s defenders, the scheme is needed to stop the further ballooning of the army’s pension payments, which are now almost half as much as its entire 2022-23 military budget. Pensions have been growing disproportionately because, like our civil servants, Army jawans too are living much longer than they did half a century ago. But this argument is not convincing.

Second, even this rise in the Army’s non-weapons budget had already been addressed in 2016, by a sharp reduction in fresh recruitment from 71,800 jawans in 2015-16 to 50-53,000 in each of the succeeding five years. But 60,000 jawans have continued to retire every year. So the army has already been downsizing itself – by around 30,000 persons a year – for six years when the government produced this lame excuse for destroying a system of recruitment that had served the British, and then Independent India, well for more than a century-and-a-half.

So is there another purpose behind the Agnipath scheme? Since this government never opens any of its decisions to public scrutiny before implementing them, one can only make educated guesses. One of these is too serious to ignore. The Modi government’s real purpose could be to destroy the ethnically diverse army we have today and turn it into a simulacrum of the homogenised ‘nationalist’ armies that Europe created in the 18th and 19th centuries after forcibly merging  the patchwork quilt of ethno-national ‘regions’ identities that had existed in Europe, bound together by history and the constitution,  that we have today.

Does this sound far fetched – the product of a mind obsessed with conspiracy theories, and willing to believe Modi to be capable of anything , so long as it reinforces and perpetuates his hold on power? If you suspect that, then look at the way Modi has been using rewards and punishments – promotions out of turn and repeated extensions of service to compliant police and government officers, and transfers, punishment postings, dismissal and prosecution to those who dare to question, or refuse to obey his orders.

Through such tactics, Modi first thoroughly destroyed the independence and integrity of the Gujarat police, then after becoming prime minister, that of the Delhi police, the Central Bureau of Investigation (CBI) and the National Investigation Agency (NIA). He brushed aside the promotion system within the Army and the CBI and amended the Unlawful Activities (Prevention) Act (UAPA) to turn it into a weapon against civil society, and against its hallowed right to protest.

So, why should he stop there? Why should he not also attempt to reshape the Indian Army into a weapon for the creation of a Hindu state? In sum, the Agnipath scheme is not designed to strengthen or modernise the Indian Army, but to create the lethal force that Hindutva may one day need to complete its grand design. 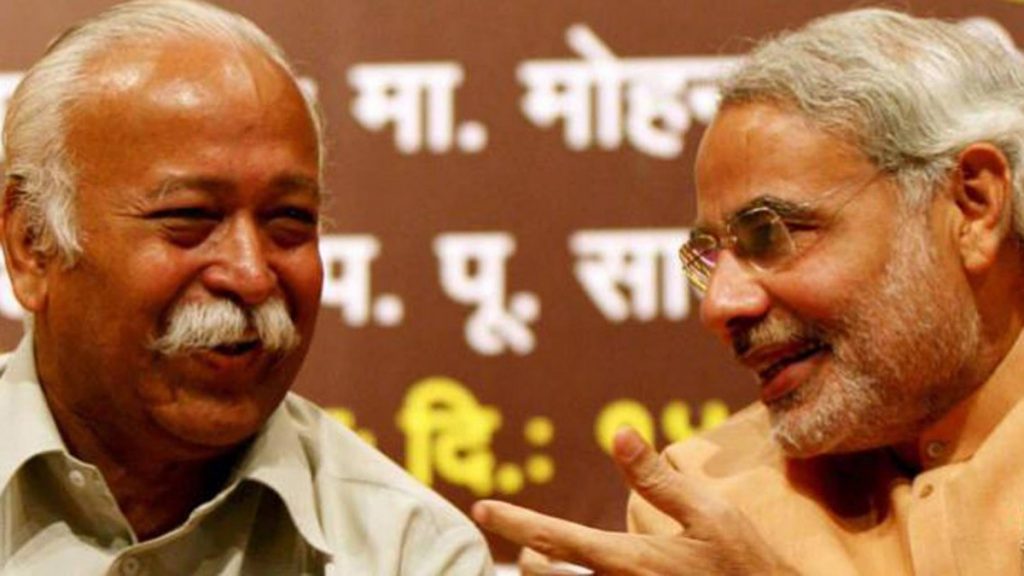 This is the background against which we need to ask ourselves, “What purpose could such a ‘New Model’ army serve that the present army cannot?” There is only one that springs to mind: it would be  to ensure obedience by state governments if the Central government declares an internal Emergency but some state governments refuse to abide by its directives. This issue had not arisen when Indira Gandhi declared her Emergency in 1975 because all the states were then ruled by the Congress. But today’s Indian federation is almost unrecognisably different from the one that existed then.

Dominant party democracy ended in 1989; the 44th amendment to the constitution, passed in 1978, has made the declaration of a National Emergency virtually impossible – except when the country faces war or an internal armed uprising; and the Bommai judgment of the Supreme Court of 1994 has virtually ruled out the declaration of President’s rule under article 356, except in the rarest of rare circumstances.

This situation is not to either Modi’s or the Sangh parivar’s liking. Both have come to power with a transformative agenda for creating a unitary Hindu rashtra on the model of the European state. So from virtually its first year in power, the BJP has been resorting to a variety of stratagems, ranging from bribery to blackmail using compromising police files, to seek to replace not only Congress but other strong governments like that of Mamta Bannerjee in Bengal and H.D. Kumaraswamy in Karnataka. Its aim is to eliminate the vestiges that still remain of the national dominance the Congress had enjoyed for four decades after Independence. If it fails to destroy federalism in this way, but remains determined to set up a Hindu rashtra, it will, sooner or later, face the quandary of whether or not to use force. And, since the state police forces are also 2.6 million strong, it may – should it decide upon confrontation – look to the Army to handle whatever civil unrest follows.

This is something that all the three Armed forces have made clear to more than one government they will not do. The reason is obvious: with recruits drawn from every part of the country, its jawans will never know when they may be asked to open fire on their own community or kin. The mere possibility that they could be asked to do so will destroy their discipline, loyalty and readiness to give their lives for their country.

One of the long-term aims of Agnipath is to transform the ethnically diverse Indian Army of today into an ideologically homogeneous and centralised army that will do the government’s bidding unquestioningly. This transformation will, admittedly, take more than a decade and may never be as complete as the Hindutva camp would like, but it will give the Sangh parivar a more immediate benefit. This will come from the 75% who fail to get inducted into the permanent army.

These will be young men sufficiently disciplined, and conversant with arms, who could make excellent militarised cadres for the BJP, the Vishwa Hindu Parishad and the Bajrang Dal. Many may have already been chosen from the RSS shakhas and Vidya Bharati schools. Trained in the use of arms and spread thin across every town and village in the country, they will decimate the opposition cadres and create the long term sustainability of Hindutva power in India. Best of all, this will be done at the taxpayers’ expense. We, the people of India, will then have paid for the snuffing out of our own democracy.