How Does the Indian Army's Winter Deployment in Ladakh Fare Against the PLA's?

While PLA troops will weather the same punitive environment, better living conditions will give them an advantage over their Indian rivals, despite the latter's superior experience in mountain warfare.

Chandigarh: The rival Indian and Chinese armies locked in an intractable faceoff along the disputed line of actual control (LAC) since May, are now positioning themselves for their harsh winter deployment at forbidding altitudes in the desolate Himalayan Ladakh region, the world’s highest and most fierce-some desert.

Senior Indian army officials said that other than remaining vigilant at heights of over 13,000 feet and above, the two armies are furiously preparing to combat, till April 2021, the harsh and unrelenting environment in which temperatures have already dropped to well below zero degrees Celsius in some parts.

To counter such bitter cold and temperatures that will shortly average minus 25 degrees Celsius, before plummeting further in the upper mountainous reaches to minus 40 degrees, China has provided its People’s Liberation Army (PLA) troops with prefabricated thermal shelters in an environ where even the slightest carelessness can be fatal.

According to UK’s Jane’s Defence Weekly (JDW), the PLA Daily had reported that these thermally insulated habitats, developed by the Army Engineering University comprise dormitories, wash rooms, toilets, warehouses, microgrids and heating equipment. The latter, the Daily stated is capable of managing temperatures up to minus 55 degrees by maintaining an indoor balminess of 15 degrees Celsius.

The October 9 JDW report goes on to reveal that such PLA facilities, which have been in use across outposts on the Tibetan plateau and surrounding mountainous areas over the past two years, can be adjusted in terms of size, structure and interior spaces to meet the soldier’s needs.

Quoting from the PLA Daily, JDW claims that these shelters can reduce reliance on long-distance fuel distribution, whilst additional warmth can be supplemented by diesel heaters to tackle rainy and snowy conditions, as well as extreme temperature lows. The prestigious magazine further stated that PLA personnel deployed in this region against the Indian Army had also been issued an assortment of ‘new high-tech’ clothing to combat the cold, but provided no details of Chinese troop numbers in the area.

Army sources, however, said these totalled around 50,000 PLA personnel, adding that logistically these troops had a “topographical advantage’ with regard to terrain and, unlike on the Indian side, their outposts were serviced by a web of metalled roads that crisscrossed the Tibetan plateau. This network rendered transporting troops, materiel, ordnance and other essentials like food far less cumbersome, faster and cheaper for the PLA. 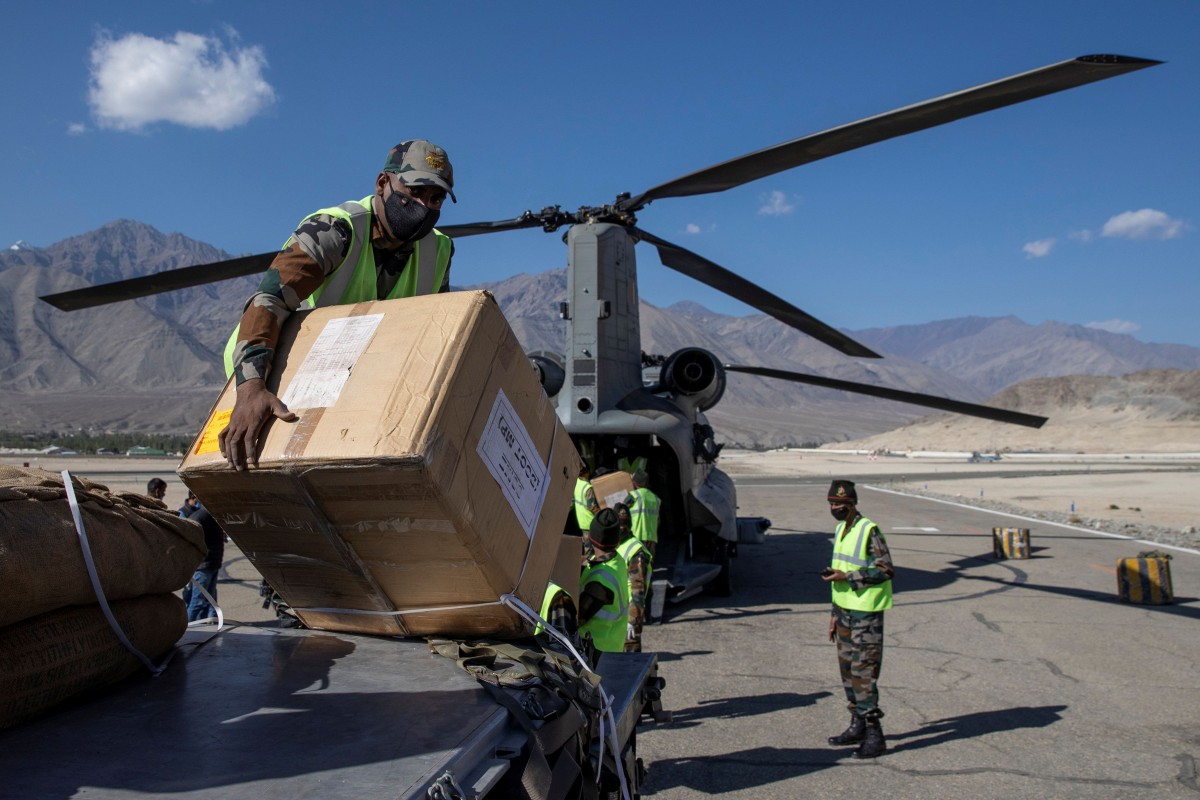 The well accoutred PLA posts along the LAC are also likely to be fully electrified soon. The Global Times, a mouthpiece for the Chinese Communist Party, recently claimed that the Chinese State Grid Corporation was scheduled to complete a mega power project in the region by December by laying a 1.689km long transmission line. Costing over $1.1 billion this arterial link line connected China’s national power grid to the Ngari prefecture in Tibet’s westernmost area abutting the LAC.

Unlike the PLA, the Indian Army had major haulage problems and infrastructural handicaps in the form of roads and unfriendly terrain in servicing its forward vertiginous positions along the LAC. It sourced a majority of its requirements, including food, fuel, oil and lubricants from the plains, transporting them via an unending fleet of civilian and army trucks that travelled up to Ladakh throughout summer, augmented by supplies ferried in by Indian Air Force (IAF) heavy-lift aircraft like C-17 Globemaster IIIs and C-130J-30 Super Hercules at astronomical cost.

In its LAC deployment of around 40,000 troops spread across 250-300km of the LAC, the army is drawing upon its experiences garnered from 36-years of manning the 17,000 feet high Siachen Glacier, which has the additional hazards of avalanches and slippery slopes, which are not there in Ladakh.

But the overwhelming challenges the army faces in its winter deployment along the LAC remain formidable.

“Although the threat perception from China always existed, it remained in the background and we never acted upon it or took any remedial action to obviate it” said military analyst Major General A.P. Singh (retired) who has served in Ladakh. Now that it has emerged abruptly, we are scrambling to make do with what we have to make good our extended winter deployment along the LAC, he resignedly added.

Meanwhile, the army’s Enhanced Winter Stocking (EWS) is currently at an advanced stage of amassing lakhs of tons of assorted supplies, including ammunition, at Leh from where these goods are being pushed further to logistics nodes, either aboard trucks or helicopters and even by mules and porters to remoter areas. “In places like Ladakh logistics is of huge importance” Major General Arvind Kapoor, chief of staff of the army’s Leh-based XIV Corps recently told Reuters. In the last 20 years, we have mastered it and all supplies that we need have already been pushed to wherever they are required, he added.

Army engineers are also erecting an assortment of imported arctic tents for three to five soldiers and varied pre-fabricated insulated huts, sourced locally, to accommodate six to 20 troops each. Every habitation is being equipped with kerosene-fuelled Bukhari’s or special heaters, without which it would be impossible to exist, while hasty imports of high altitude clothing and mountaineering equipment mostly from Europe, at high cost, is underway. Hundreds of previously worn serviceable clothing items from Siachen are being passed on to formations now based along the LAC. 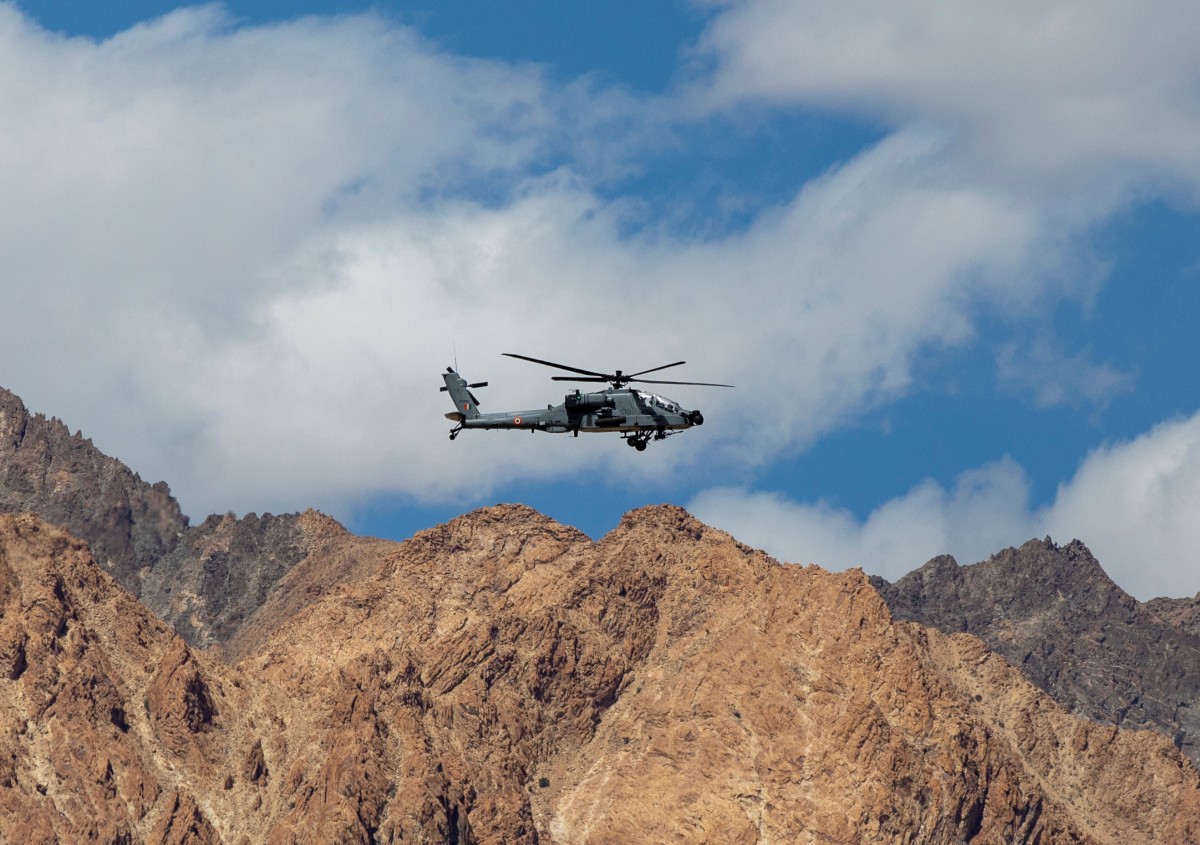 Additionally, pre-fabricated toilet and bathing stalls-unlikely to be used much, if at all, due to a severe water shortage-and kitchens are also being erected. Officers who have been posted in the area said rocky terrain, limited spaces and fierce winds carrying deadly particles of sand, made it difficult to assemble larger structures similar to those of the PLA. Semi-permanent brick-and-mortar constructions were simply out of the question, as their cement if applied now would only dry the following summer, said Gen Singh, adding that it is difficult to even remotely imagine the extreme adversities army troops will imminently face along the LAC.

Water for drinking, basic daily usage and for cooking too will be in short supply, as many rivers and tributaries in the area are already freezing up, and unlike Siachen where snow can be melted, this option is limited along the LAC. Furthermore, water from the Pangong Lake and other large water bodies scattered across the desolate region, is brackish and undrinkable.

Army officers also anticipate an additional workload on the Army Medical Corps (AMC) in anticipation of a host of potential high-altitude complications amongst soldiers like pulmonary and cerebral oedema and hypothermia-related attrition. Equally debilitating problems like frostbite, high blood pressure, nose bleeds, hypertension and respiratory ailments are also not uncommon at those heights. Consequently, the number of AMC teams per battalion, staffed by doctors and nursing orderlies too will need augmenting.

And though PLA troops too will weather the same punitive environment, their better living conditions will give them an overall advantage over their Indian rivals, despite the latter being widely acknowledged as hardier and more experienced in mountain warfare compared to their Chinese adversaries.

The PLA, for its part last fought a four-week long war with Vietnam in 1979, in which it came off worse. Thereafter, following a gap of over four decades it is, for the first time currently locked in a faceoff with a ‘real’ enemy with a comparable military in altogether inhospitable conditions that pose a daunting threat to its men and machines.

It remains to be seen how competently it will emerge from this ordeal next summer.