“This is a very distinct snake, in size, colouration, behaviour and ecology. It appears to represent a quite rapidly evolved new form.” 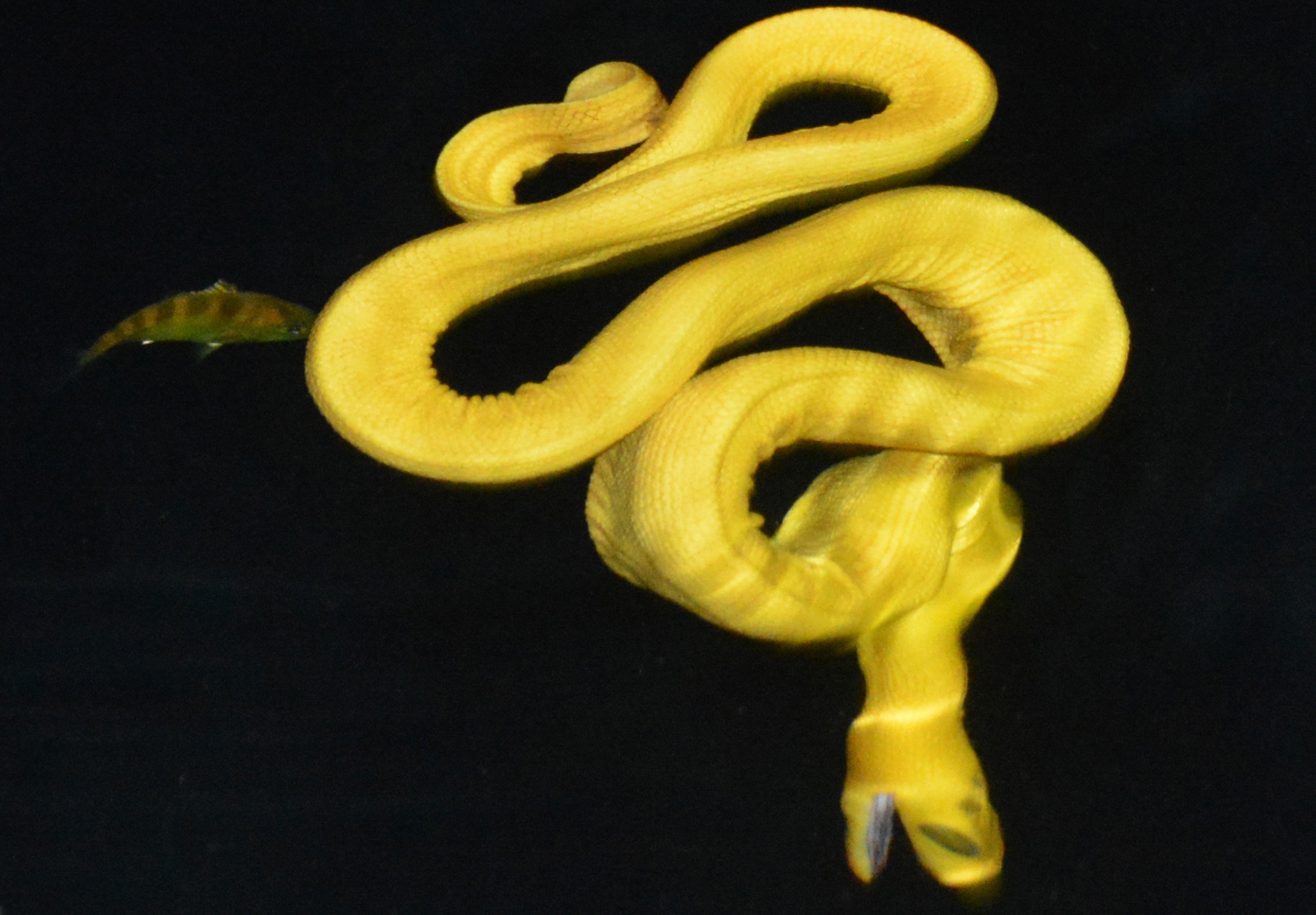 The yellow-bellied seasnake (Hydrophis platurus) is the most ocean-faring of all seasnakes. It has colonised tropical waters around the world except the Atlantic. Despite its vast spread, it doesn’t vary much in appearance or behaviour. Yet researchers described a new subspecies – Hydrophis platurus xanthos – from Golfo Dulce, in southwest Costa Rica, that has a unique fishing strategy.

The yellow-bellied seasnake sticks to a fairly uniform dress code: black back with no stripes or bars, a yellow belly and spots or bands on its paddle-shaped tail. While the yellow may creep up towards the back in some individuals or the black may leak down into the belly, the dramatic two-colour pattern makes the species unmistakable. Yellow-bellied seasnakes that wash up on the Indian coast conform to this colour combination. In some individuals of the eastern Pacific, a yellow line separates the black back and brown belly. Some members of the species are even more striking: they are mostly yellow with a thin black stripe running down the length of their bodies.

But the new subspecies is completely yellow with a few black spots, and hence the name ‘xanthos’, from the Greek for the golden colour. Herpetologists knew of these all-yellow seasnakes since 1971, when Chaim Kropach of the Smithsonian Tropical Research Institute, Panama, wrote about them. But they thought these canary yellow snakes were a xanthic morph or race. The popularity of this population has grown among collectors and tourists as the numerous photographs posted online bear out.

Bessesen noticed that nearly 70 snakes within a 320 square kilometre patch of the northern half of Golfo Dulce were all yellow and smaller than their close relatives. They averaged 49 cm only, while other populations of yellow-bellied seasnakes were 60-75 cm long.

“Working alone in the field, catching and measuring venomous sea snakes, I had to devise a system to do everything safely and quickly – and hands-free,” Bessesen told The Wire. “I came up with a little face mask made from self-stick bandage wrap. It worked like a charm! The snakes settled down within seconds. Body length was measured using a string method, which ensured accuracy of natural state size and eliminated concerns of intervertebral damage caused by stretching.”

Female yellow-bellied seasnakes are larger than the males, reaching sexual maturity at nearly 65 cm. No yellow seasnake found so far is that large. 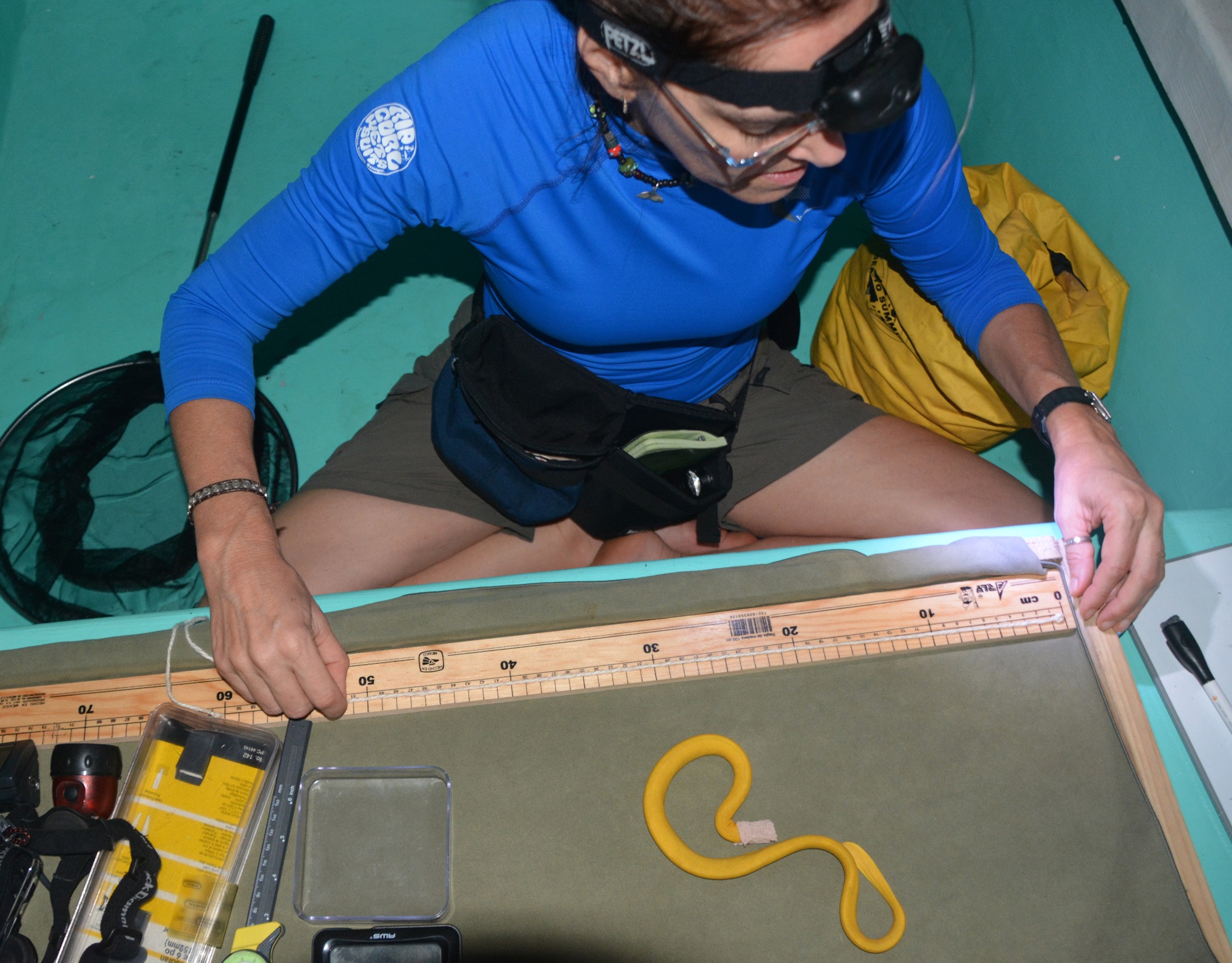 Brooke Bessesen measuring a yellow seasnake. Note the face mask around the snake’s head to calm it down. Credit: Luis Nieto

More than 80 fishers and tour boat guides corroborated Bessesen’s observations. Preserved museum specimens caught from the gulf also shared the same unique colour. The nearest population of yellow-bellied seasnakes is 22 km away, near the mouth of the gulf. However, during one field season, Bessesen came upon three yellow-bellied seasnakes in all-yellow territory, an unusual occurrence in the local fishers’ experience. Two were young and the third a dying adult. Hurricane Otto had lashed the area about seven weeks earlier and could have driven the snakes into the gulf, say the authors.

Similarly, others have caught yellows on the northern coastline of Costa Rica. Bessesen found one near the mouth of the gulf during the rains. The authors suggest these individuals may have washed out of the gulf.
Assembling all these bits of data took seven years. “The bulk of the time was spent collecting distribution data,” says Bessesen. “From 2010 to 2011, my research assistant Jorge and I logged 424 observation hours in a small boat in Golfo Dulce, enduring the elements. Some rain and waves, mostly scorching sun. However, those early data were not enough for Gary and me to designate xanthos. So in January 2017, I went back for a morphology and behaviour study. It only took about 30 hours to find, gently capture, measure, photograph and release 46 live snakes.”

A long shallow valley less than 80 metres deep separates the northern half of the gulf, the deep end, from the ocean. The contours of the bay’s bed slow the entry of seawater, preventing yellow seasnakes from going out and yellow-bellied seasnakes from coming in.

Alejandro Solórzano, the author of Snakes of Costa Rica, reported the role of the gulf’s bathymetry in isolating this population in his 2011 publication in Spanish.

Waters of four major rivers and the low inflow of seawater make the gulf’s waters less saline, hence its name: Golfo Dulce or the Sweet Gulf. But the bay is warm and often poor in dissolved oxygen – conditions hostile to the survival of yellow-bellied seasnakes. They die in waters warmer than 33 ºC, and the surface water temperature of the northern gulf can hit an uncomfortable 32.5 ºC. Snakes with black backs that absorbs sunlight probably won’t do well in these warm waters. Presumably, the light yellow back allows the subspecies to survive at these temperatures.

Yellow-bellied seasnakes spend most of their time underwater, between 20 and 50 metres’ depth, staying submerged for nearly 210 minutes at a time and absorbing a quarter of their oxygen needs through their skin. Yellow seasnakes must have come up with some strategy for surviving in waters with low oxygen levels.

“Perhaps the ability to respire through the skin is lost, requiring the snake to rise more frequently to the surface for air,” suggests Bessesen.

Yellow-bellied seasnakes prefer drifting with the currents of glassy calm oceans, blending with foam and floating sticks or logs. These slicks may include a few snakes or, occasionally, congregations of several thousands. Fish mistake the snakes for flotsam and shelter underneath, making easy pickings for the reptiles.

Unlike yellow-bellied seasnakes, the yellow ones prefer turbulent waters. On a couple of nights, when the sea grew calmer, the authors say yellow snakes disappeared altogether. During the day, they rest in a relaxed loosely curved posture like their close relatives but don’t drift in slicks. At nights, when temperatures are lower, they hang in a tightly bunched up loop with their heads hanging down in the water and mouths open.

“Looking at the ambush posture, people might assume the yellow sea snake springs open, striking like a viper, but that’s not the case,” says Bessesen. “The ‘coil’ just presumably stabilises the animal’s body in the waves while the snake’s head moves, snapping up fish that come close. In our January data, 80% of xanthos assumed a sinusoidal posture while on the surface at night. Never during the day. I documented six snakes in the full head-down position, with small or larval fish around them. One had a fish in its mouth.”

No yellow-bellied seasnake behaves in this manner. They neither hunt at night, bunch up in a tight coil, nor lie in wait with their heads peering into the waters.

The all-yellow seasnakes are unusual on many counts – colour, size, preference for turbulent waters, avoidance of slicks, inclination to fish at night and, especially, the hunting strategy.

“This is a very distinct snake, in size, colouration, behaviour, and ecology,” says coauthor Galbreath. “It appears to represent a quite rapidly evolved new form. The power of natural selection operating in a new sort of habitat can be great.”

The authors say the yellow seasnake may well be a species by itself but it requires more research. “It’s an interesting paper on an interesting phenomenon,” Wolfgang Wüster, a senior lecturer at Bangor University, UK, told The Wire. “The authors do provide evidence of a local form of the widespread yellow-bellied sea snake that is highly differentiated in colour pattern and behaviour, and, from previously published preliminary genetic work, may well show a degree of genetic differentiation, although the genetic data from the previous paper are not really adequate to assess this rigorously. They also provide some hypotheses as to the causes of this differentiation, such as the hydrological isolation of the Golfo Dulce.” Wüster wasn’t involved in the study.

Besides the molecular study Wüster cites, another one didn’t find much difference in the venom of the two populations.

Are differences in colour and behaviour alone enough to designate a subspecies? Snake taxonomy revolves around the arrangement and number of scales on the head, around the body, and underside of the tail. In some cases, teeth and the structure of hemipenis are crucial for diagnosing species. The Bessesen and Galbreath paper offers none of these standard diagnostics.

“Summarising this very interesting phenomenon through the description of a new subspecies is a crude tool,” says Wüster, “since the subspecies category has a long and voluminous history of abuse: subspecies described in the past represent anything from trivial local colour variants to sections of a cline [gradual variations between extremes] to what should be regarded as full species, and entirely unfounded composites.”

Another herpetologist refused to comment on the paper, saying, “In general, I am not a big fan of subspecies.”

“However, since regulators and funders love neatly pigeonholed, named entities, this particular description may help put this unique population on the map for protection and further study,” says Wüster. “More than anything, the study highlights the opportunities for further work on the selective forces and physiological correlates of the radically differentiated pattern and behaviour of this population. A number of species of sea snakes across the world, especially around some Australian reefs, such as the famous Ashmore Reef, have crashed precipitously, for poorly understood reasons. Understanding how these snakes have responded to physiologically stressful conditions may help us understand how other species could respond to pressures such as climate change or other anthropogenic pressures.”

The extraordinary habits and behaviour of the yellow seasnake highlight how animals adapt to unique situations.

The study was published in the journal ZooKeys on July 24, 2017.