On the one hand, we congratulate ourselves on the rising numbers of women in science and, on the other, choose to remain neutral in the face of orthodox patriarchy. 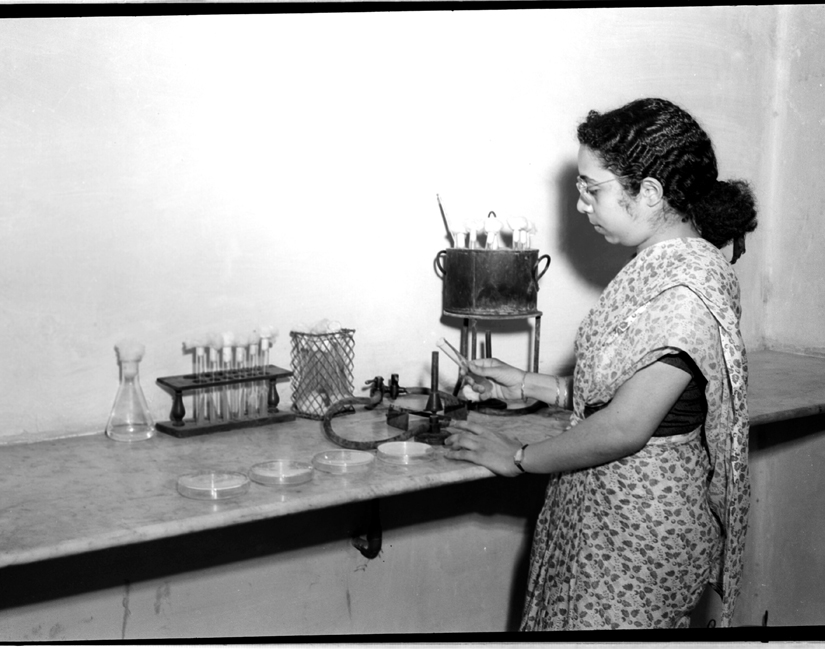 A woman scientist on research work at the Indian Agricultural Research Institute, NewDelhi, 1951. Caption and credit: publicresourceorg/Flickr, CC BY 2.0

Ashwini Vaidya is a post-doctoral fellow in linguistics and cognitive science at IIT Delhi.

Research is usually carried out at academic institutions, which seem so serene, verdant and removed from the hubbub of life. For most laypersons, research work has an esoteric, otherworldly character – but this is very different from reality. The fact is that research has a strong social component: there are conferences, collaborations and job interviews, where people’s group behaviour is strongly influenced by the social context. Yet the myth of the lone scholar/genius working his or her way through the world of ideas persists. The myth is also made more misleading by the knowledge that access to the world of ideas has often been restricted. Throughout history, this lone scholar has most often been male and has worked in traditionally male-dominated institutions.

The 2016 Hollywood film Hidden Figures shows the mathematician Katherine Johnson working in NASA in the early fifties as a ‘coloured computer’, who had to wait several years until she could even be credited as an author of a technical report. Racial segregation was a part of NASA at that time, even though many great minds worked there. Women were not allowed at meetings and she often had to insist that she had a right to be present. What’s more, even though Johnson made enormous contributions to the space program, it was only last year that NASA thought of naming one of their buildings after her. Minimising the contributions of women is a recurring theme in the history of many fields, including science. We also give too little importance to their tenacity and daring in an often unfriendly environment.

General perceptions about women in research or technical fields in particular persist. When I was accepted into a doctoral program in 2009, fellow students came to congratulate me but at least one asked me how this step would affect my marriage plans. Rather than being asked about the excitement of doing research, women are questioned about ‘how they manage their life’. The systems and social pressures that place these expectations on women in the first place are not examined. Instead, the individual woman must answer questions about ‘balance’ and negotiating life and work. Why not examine the role of the larger community and society that has changed at a snail’s pace since women started working outside the home?

In a recent case, a PhD student named Manjula Devak committed suicide in the face of continued dowry demands from her in-laws. Reports suggest that she was successful in her academic life; she had published papers and was about to graduate. If we go by external metrics of progress, then her story is a paradox. A PhD degree and a highly specialised skill set could not guarantee autonomy and independence in her case. It was an orthodox mindset that still had the upper hand. Her death is a vilification of our society where, on the one hand, we congratulate ourselves on the rising numbers of women in science and, on the other, choose to remain neutral in the face of orthodox patriarchy. We need to denounce and shame such a mindset consistently and publicly.

While cases like these are indeed depressing, there are also heartening signs of change: some institutions in India are becoming more proactive about childcare support. Some international conference organisers display anti-harassment and anti-discrimination policies on their websites and, in India, there is research funding available for women who have had a break in their career. These are very good signs – but there is a sense that these issues are consistently a low priority for most decision makers. This may have something to do with the fact that very few women have top administrative positions in many science and technology institutions. But it is also related to the fact that certain attitudes about women’s capabilities are so deeply entrenched, that many small changes (including a change in leadership) are needed. Even a simple sharing of stories among colleagues, both male and female, might make more people realise how the science is the same, but the day to day lived experience is sometimes very different.

For example, a woman with a PhD interviews for a research project position and is told that she would not be paid according to her qualification because she has a young child and would anyway not work very hard. It is laughable to think of the same reason being given to a man. Discrimination (based on gender but also on race, caste or sexual orientation) has been known to occur in other (non-academic) workplaces, but it’s not uncommon in academia at all. There’s also an implicit sense that highly-educated people at elite institutions ‘don’t do this’, but as history has shown, nobody is exempt. When discrimination is not physical or violent, it is often not recognised as worthy of complaint. These cases are simply examples of ‘how our society works’, and we’re asked to normalise these experiences or not think too much of them.

Grievance and anti-harassment committees are also sometimes token gestures, especially if a complaint is made by a junior against a senior academician. Academia is hierarchically structured with much value placed on seniority. If these committees are not strictly confidential, nobody would like to approach them. Many stories in the media from across the country suggest that these committees may exist, but don’t always function impartially in our institutions.

The myth of the lone (mostly male) scholar needs to die a slow, but certain, death. There is a need to acknowledge the support systems of a researcher and understand cases where these systems are missing or need to be supplemented. If we turn to the acknowledgements section of any dissertation, it will readily identify a few sources of support: family and friends, a network of peers, advisors at their academic institute, mentors from the field and beyond. Anyone who has typed that page will tell you, when any of these support systems are missing or dysfunctional, there is a price to pay.