Why Two Conflicting Measurements of the Universe's Expansion Have Scientists Excited

The Hubble constant describes the current rate of the universe's expansion. It has been found to have two values based on different calculations. This is weird because constants are supposed to have a single, fixed value. 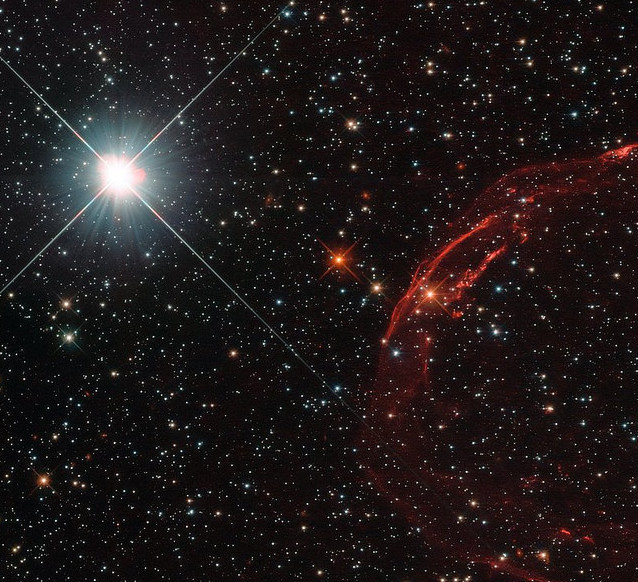 Several thousand years ago, a star some 160,000 light-years away from us exploded as a Type Ia supernova. The aftermath of this energetic detonation is shown in this image from the NASA/ESA Hubble Space Telescope. The remnant has been designated DEM L71. Credit: gsfc/Flickr, CC BY 2.0 Several thousand years ago, a star some 160,000 light-years away from us exploded as a Type Ia supernova. The aftermath of this energetic detonation is shown in this image from the NASA/ESA Hubble Space Telescope. The remnant has been designated DEM L71. Credit: gsfc/Flickr, CC BY 2.0

The famous astronomer Allan Sandage condensed cosmology – the study of the universe and its origins – to two numbers. One is the Hubble constant, H0 (pronounced “H nought”), which describes the current rate of the universe’s expansion. The other number is the rate at which this expansion is decelerating, called q0 (“q nought”). While these two numbers adequately sum up the work of several cosmologists, there have been, and continue to be, extraordinary efforts to measure H0 and q0 more precisely.

Recent interest in q0 has been fuelled by the discovery in the late 1990s that the universe’s expansion is accelerating. That is, q0 is negative. Where is space getting the energy from that is stretching it so much? Physicists have called this enigmatic source ‘dark energy’. Its existence (if that) would suggest Albert Einstein’s theories of gravity, which describe the force as being a product of the curvature of spacetime, could be missing some kind of modification.

When this was out of the way, H0 joined q0 on the road to understanding the universe’s accelerating expansion.

To measure the Hubble constant, you look for ‘standard candles’ in the night sky. These candles are dying stars. Specifically, a supernova – the explosive demise of a star – of the type Ia (“one A”) is extremely bright. More importantly, all Type Ia supernovae have nearly the same brightness. So as soon as astronomers spot a Type Ia supernova in a distant galaxy, they can also quickly measure the distance to the galaxy by working backwards from how much the explosion’s brightness seems to have dimmed.

Why do we have to look so far into the universe and not just measure these numbers in the lab, you ask? We can’t. In 2016, Adam Riess, an astrophysicist at the Johns Hopkins University, Maryland, and his colleagues estimated H0 to be 71.25-74.75 (km/s)/megaparsec. This means that an object 3.26 million lightyears away from us is moving away at 71.25-74.75 km/s. This the distance scale at which the universe’s expansion is perceptible: across millions of lightyears, not a few metres. So astronomers take to cosmological distances to tease H0 and q0 out.

Anyway, the absolute brightness of a Type Ia supernova at a certain wavelength is calibrated using the light of a closer set of stars called the Cepheids. The brightnesses of the Cepheids vary according to their period of variation (a.k.a. Leavitt law, named for Henrietta Swan-Leavitt who discovered it in 1912). So by knowing how bright the Cepheids are and their distance from us, we can tell how brightness varies across the reaches of space. This is how Riess and his collaborators were able to make their measurement as well.

There happen to be other ways to measure H0, and that brings us closer to a new conflict we’re being faced with. After the Big Bang, thought to have happened about 14 billion years ago, the newborn universe was awash with light. Over time, some of this light – or energy – became trapped in the matter that was starting to form around it. When the universe began to expand, light at lower energies broke free, or decoupled, from the matter, and has remained free in the universe to this day. It pervades all of space and gives deep space, a place truly in the middle of nowhere, a dull but persistent temperature of about 2.72 K.

By virtue of having been around for as long as the universe itself has, the CMB holds important clues about how the universe expanded – including an imprint of the Hubble constant. And researchers using this method found that H0 = 66.9 (km/s)/megaparsec.

What could be causing the discrepancy?

While subsequent measurements have held up the initial numbers (give or take a little), the difference between them hasn’t been going away. It suggests that there is something in this universe that’s affecting the ‘standard candles’ and CMB methods differently – something that we’re not yet able to understand. So enter physicists who think this could be a sign of ‘new physics’ – physics beyond what we already know, physics that could help answer some unanswered questions in science. It’s a big deal because signs of ‘new physics’ have been very hard to come by in other areas of study.

If the measurements continue to be found to be legitimate, then what we already know, what’s already there in our textbooks, models or theories, won’t help. We’ll have to get creative about coming up with new ideas. We’ll then have to check if each idea can explain both measurements and also why a difference arises – particularly in a way that doesn’t refute all the other things about the universe we know to be true.

For example, one way out is an additional source of energy we’re yet to understand that kicked in the early stages of the universe’s expansion. It could have altered the rate of expansion just as matter first began to take shape, effectively modifying the value of H0 as inferred from CMB measurements. To test this idea, scientists will have to revisit the their models of the Big Bang, think about what this energy source could have been and test by checking if the CMB bears any imprints of it.

Additionally, various other star populations can be used to measure distances. For example, astronomers have proposed using a class of pulsating stars called Mira variables. The colours of all these stars are shades of red; they can be thousands of times brighter than the Sun; and – like the Cepheids – also exhibit a fixed relationship between their brightness and periods of variation.

If calculations based on different stellar populations arrive at the same value of H0, it would strengthen the case for existing measurements to be true and thus also for the discovery of some form of ‘new physics’. The calculations can also be aided by state-of-the-art observatories like the James Webb Space Telescope (JWST). The JWST, expected to be launched later this year, will study the emission of longer wavelengths of light in the universe and track a larger catalog of stars than before to measure H0 to within 1% precision.