As Seas Exchange Heat, the Indian Ocean is Becoming a Marine Hothouse 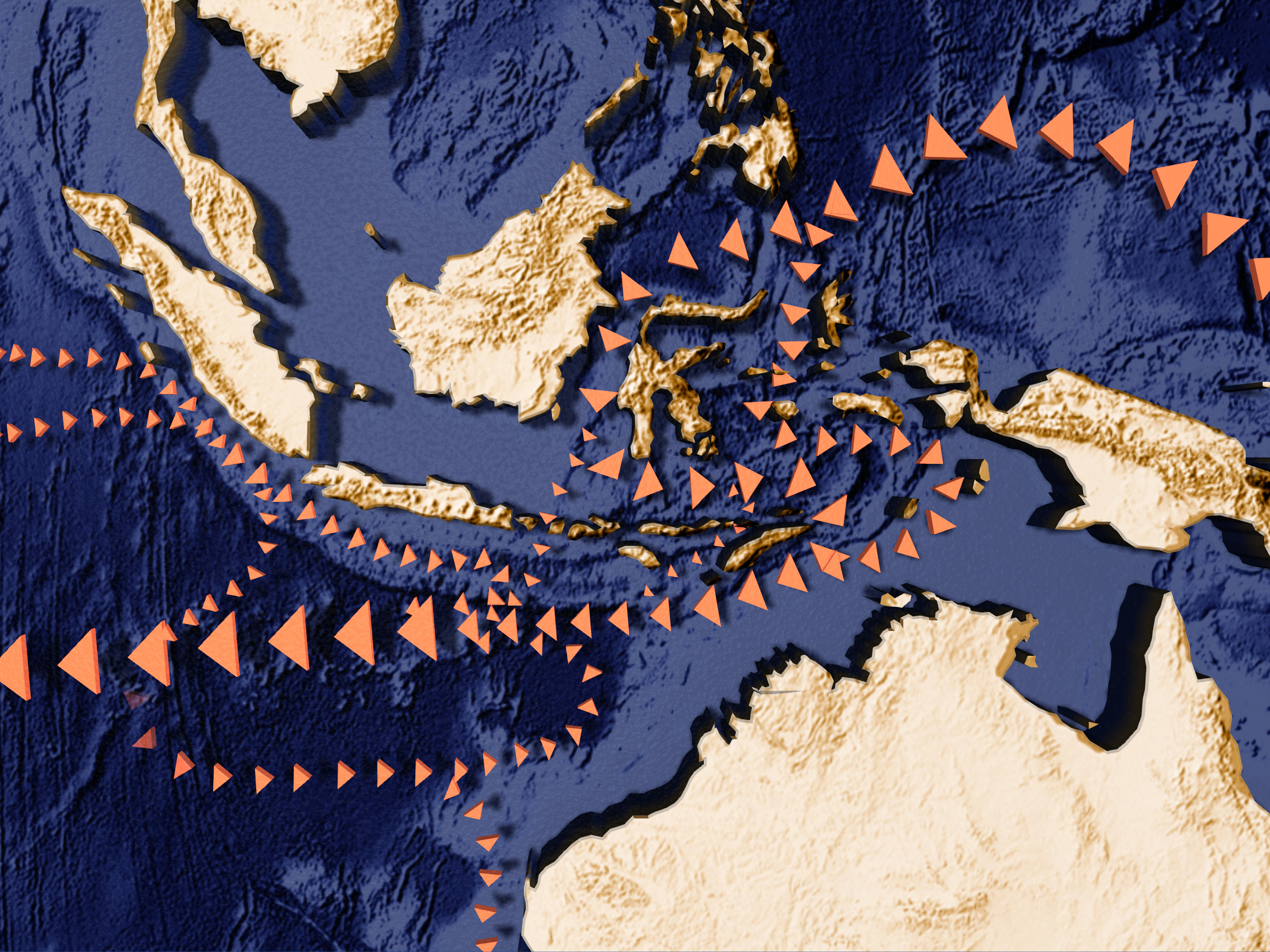 A representation of the Indonesian Throughflow. Credit: cmar.csiro.au

Since about 1998, the rate at which the Earth’s surface temperature has been becoming hotter due to anthropogenic global warming has slowed. It slipped from about 0.12 kelvin per decade since the late 1800s to about 0.05 kelvin per decade. For a time, climate deniers jumped on this statistic to refute that the burning of fossil fuels was warming the planet. However, scientists found out that such variations were due to the internal variability of the world’s climate, and that such hiatuses would occur again.

In fact, during the hiatus period the subsurface Pacific Ocean was found to have absorbed a significant amount of heat. But recent measurements of the sea’s depths have actually signalled that the temperature there is dropping, not increasing. If the Pacific Ocean had absorbed the heat from Earth’s atmosphere yet its subsurface waters were cooling, where is the heat?

As it turns out, the Pacific has been leaking it into the Indian Ocean for the last decade, via currents running along the Indonesian archipelago. A team of researchers from France and the US found that the upper 700 m of the Indian Ocean accounted for more than 70% of the global heat gain in 2003-2012.

“The model simulation and hydrographic data both showed that Indian Ocean heat content did not increase much prior to 2000,” said Sang-Ki Lee, an oceanographer at the National Oceanic and Atmospheric Administration, and lead author of the study. “We believe that the massive heat transport from the Pacific Ocean to the Indian Ocean occurred during the past decade is a fairly unusual phenomenon.” They published their findings in Nature Geoscience on May 19.

To support the measurements they made, Lee and his team simulated the warm water’s flow from the Pacific into the Indian Ocean in a computer program. “It is not clear how good the model is in simulating the features of the Indian Ocean, specially at subsurface levels,” P.N. Vinayachandran, associate professor at the Centre for Atmospheric and Oceanic Sciences at the Indian Institute of Science, Bengaluru, told The Wire. “The reliability of results would depend on this factor.”

Nonetheless, the hydrographic data mustered by Lee and co. and their model’s ability fit in seamlessly with the onset of the hiatus in 1998 lends a platform from which to explore the consequences of their find. According to their model, the warm water was transported into the Indian Ocean through the Indonesian Throughflow. It is a series of deep straits in the archipelago through which, due to a pressure gradient between the two oceans, 15 million cubic metres of warm water flowed per year.

The resultant cooling of the Pacific is likely to influence the El Nino southern oscillation, an anomalous heating and cooling of the Pacific’s waters off the tropical South American coast. Normally, they are about eight degrees Celsius cooler than the waters along eastern Indonesia. However, during years in which the trade winds blowing from South America to Australia and Indonesia fall off, the water along the coast of Peru becomes warmer. The result is floods in Peru and droughts in Australia and Indonesia.

The study’s authors state that the heat being pumped into the Indian from the Pacific Ocean was driven by a converse event – of the waters having becoming warmer off the coast of eastern Indonesia. Warm waters are typically nutrient-deficient and don’t support fisheries. They are also detrimental to marine ecosystems in general, greatly endangering creatures that can’t relocate to cooler waters quickly (such as coral reefs) and in turn other creatures dependent on them (like the orange-spotted filefish).

Moreover, the study reconciles the Pacific and Indian Oceans’ warming trends while also emphasizing how little we know about heat absorption by the world’s oceanic basins despite their significant effects on climate. It also raises important questions about where and how the stored heat will be released and with what socioeconomic consequences.

“It is possible that the upper ocean warmth in the Indian Ocean may be carried to the North Atlantic Ocean to increase the frequency and amplitude of Atlantic hurricanes and to accelerate the melting of Arctic sea-ice,” Lee said, but that would be on a much longer timescale.

On shorter timelines, during the Indian summer monsoon, deeper, colder water rises to the surface along the Somalian, Arabian and western Indian coasts. Lee explained: “Due to the increased upper ocean warmth the upwelling may bring warmer water to the surface releasing more water vapour to the atmosphere and thus increasing the moisture transport to India and the Southeast Asia.” This would bring more rain – and possibly floods.

Another possibility, which Lee says their team will next investigate, is the Indian Ocean transporting its heat into the Atlantic Ocean via the Agulhas current that bends around the coast of South Africa. This presents more devastating consequences because the Atlantic has already been on a warming trend since the 1950s.

Finally, the oceans aren’t bottomless either. Once a threshold is reached, they will release the heat back into the atmosphere. A study in Nature Climate Change from February this year predicted the event would be like a burst, starting from around 2020, a sustained release that would be associated with “warming across South America, Australia, Africa and Southeast Asia.” The event will also accelerate the melting of ice in the Antarctic and lead to rising sea levels.

Recent studies – including Sang-Ki Lee’s – present an important challenge. The global impact of climate change hasn’t yet visited humans the way it visited the golden toad (by wiping it out) and there is still talk by governments to reverse its impact. But with the warming hiatus predicted to end by 2020 and the Indian Ocean shown to be a prominent player in global climate variations, the world could receive a brutal preview of what life might be like at the end of this century in the next 10 years.